Is the Disney Outlet Worth the Visit?

We're going to leave the parks this month and go out into the actual streets of America, specifically an outlet mall near you, for this edition. We all know about the Disney Store, but what some of us may not know, is that Disney/the Disney Store also has a chain of Disney Outlets.

When people think of outlets in general, they may assume that the shops contain last season's merchandise, some irregular items and that all clothing is either very small or extra large. They may also focus on bargains, bargains bargains! While it's true outlets used to be the last dumping ground for retailers and represented the last ditch effort to get rid of merchandise that didn't sell the first time, they've come a long way. High-end retailers like Hugo Boss, Saks Fifth Avenue and Coach have all jumped on to the outlet bandwagon and have had great success. Not just places to get leftovers anymore, outlets have become places to score bargains on some great merchandise. Similarly, outlet malls have sprung up all over America, so it's likely you don't have to travel terribly far to find one.

Which brings us back to the topic at hand. Disney has joined the trend and has opened Disney Outlets across the country. Hourscenter.com claims there are 77 locations spread across 30 states. The question that arose in my mind is whether the Disney Outlet was worth a visit? Is it a place like Hugo Boss, where you can get great discounts on quality items? Is it a place where Disney sends its duds to make a few dollars? Even worse, are they just Disney Stores with a different name, and you'd drive longer to find the same prices and items for sale?

I took a ride to The Mills at Jersey Gardens, an outlet mall in Elizabeth, New Jersey, about a half hour drive from my house, this past weekend in an effort to answer these questions. So was this visit worth my time and would it be worth yours? The answer ultimately depends on what you want to buy and how long you're willing to take to find it. 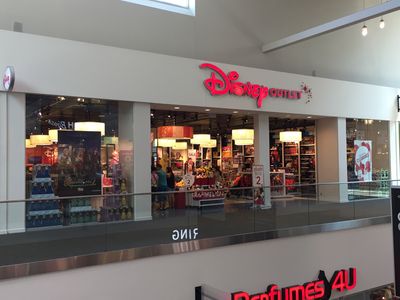 Here is the Disney Store at The Mills at Jersey Gardens, Elizabeth, New Jersey. Photo by Gregg Jacobs.

Upon entering the store, it has mostly the feel of an old school Disney Store. It has the racks up front with whatever the current hot property is (go Descendants 2!). The walls are lined with shelves full of toys and plush covering many different characters and properties from the Disney universe. The middle of the store is crammed with displays and sales racks full of clothing and housewares. The design elements are simple and less elaborate and themed than a typical Disney Store (cement floors and dark ceilings). One great feature they do have, however, are these great ceiling lamps. They have drawings of various Disney characters as if sketched by the artist (they remind me a tiny bit of the chandeliers at the Art of Animation resort at Walt Disney World). 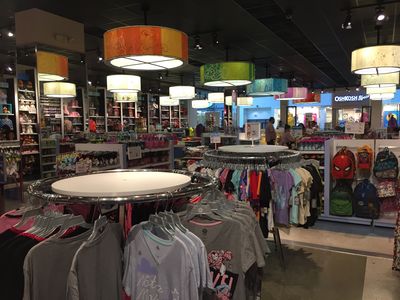 A look at the Disney Outlet from the inside. Photo by Gregg Jacobs.

By now I'm sure you're screaming, "where are the bargains?!" I am happy to oblige.

The store has plenty of sale racks. That's not too unusual for a Disney Store, but there are definitely more here than at a typical store, and the discounts are steeper for the most part. Most of the discounts are either of the "buy one, get one cheaper" or the "buy more than one and all are cheaper" variety.

Falling under the former category is a huge selection of plush. These range from Tsum Tsum size to fairly large, and there was a surprisingly large selection of characters. In additional to Mickey and Minnie, they had furry stuffed toys from Finding Nemo, the Lion King and Lion Guard, Winnie the Pooh, and even the Cheshire Cat from Alice in Wonderland. The price on these went up to $19.95 and no matter what size you pick, the second one you buy is only $2 (for the lesser priced item, of course)! 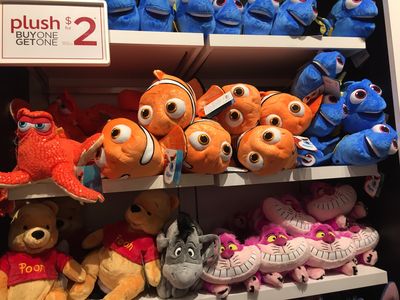 There's a massive selection of plush in all sizes available at buy one, get one for $2. Photo by Gregg Jacobs.

There was also clothing for both kids and adults. Disney Stores are known for their displays of T-Shirts where if you buy more than one, you get a discounted price on all. At the regular store, these are typically $14.95 each (though I've seen as low as $12). At the outlet, for the kids tees, they were only $6 (the corresponding adult rack was $8). The selection was great. They had tons of classic Disney characters, Disney/Pixar animated films and tons of Star Wars tees. The selection was just as good as the regular store and at much lower prices. 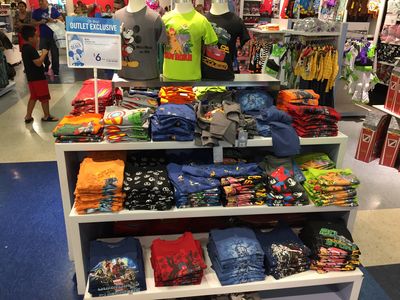 Buy more than one kids' T-Shirt and get each for only $6, Photo by Gregg Jacobs.

There were more than just tees in the clothing department, though not necessarily at bargain basement prices. They had adult pajamas (nightgowns and lounge pants, for $18 and $16, respectively). Those aren't bad prices (men's lounge pants can run up to $35 online or at the parks. That said, I saw a set of pajama pants at the outlet that was available at the Disney Store online for the same $18. They also had a large selection of children's jackets. These ranged from $29.95 to $39.95. Again, not a bad price, but the $30 varsity jacket they had at the outlet was available on sale online for $25. So again, the prices aren't bad. You just need to shop around.

Of course, the outlet had a large selection of toys. Again, I found a mixed bag here. They had a variety of children's figurine play sets available for $10 each if you buy more than one (I checked Disneystore.com, which had the same play sets for $15 each). These are a good price, and there were tons featuring the classic Disney properties as well as Star Wars and Guardians of the Galaxy. 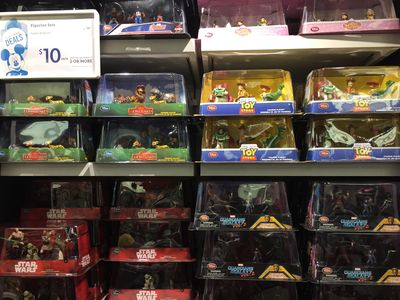 They had kids play sets at a low $10 each if you buy more than one. Photo by Gregg Jacobs

There were plenty of other toys, dolls and play sets. I found that some were bargains and some weren't. As an example, for some inexplicable reason, Halloween costumes were beginning to come out in August. These were generally in the $30 - $40 range, about the same as you'd find at a standard Disney Store. They also had housewares and kitchen mugs. The children's stuff was a great bargain (a Mickey Mouse Clubhouse plate and silverware set for kids, normally $19.95, was marked down to $8 plus an additional 25% off). The kitchen mugs, however, were a meh $15 - $20, the same price you can get anywhere.

Again, the key is to know your prices (or whip out your phone and check out the Disney Store app or Amazon while standing there to compare). In short, your mileage may vary depending on what you're looking for.

Now, I mentioned up front that your success or lack thereof at the store may rely on how long you're willing to look for treasure. I love Disney parks stuff, so the real adventure for me was in a few messy clothing racks at the back corner of the store. 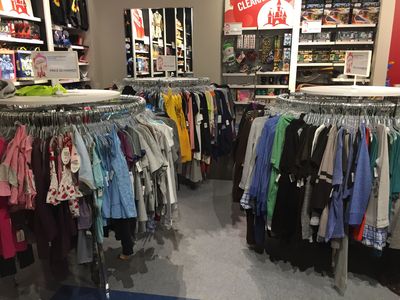 For this writer and fan, the true bargains were in this messy corner. Photo by Gregg Jacobs.

There were three racks of clothing. One was tagged priced as marked, while the other two said "take an additional 25% off". There were sections for each size, but to be honest, the stuff was kind of all over the place. Shirts for kids and adults were mixed together. Items of the same kind were in different places. You really had to dig through the racks, and if you did, you were potentially rewarded. For example, imagine my surprise, being at this outlet mall in New Jersey, at finding genuine Disneyland clothing. 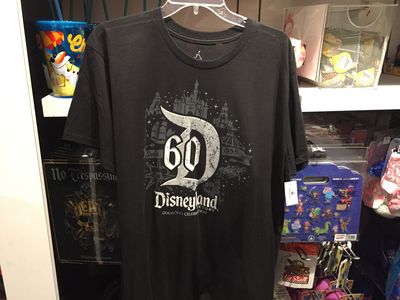 The Disneyland Diamond celebration T-Shirt was only $6.99. Photo by Gregg Jacobs.

There was a great official Disneyland T-Shirt from the Diamond celebration. It would have been $24.95 at the parks. They had it here for only $6.99. That said, they only had it in extra large, sadly too big for my smaller frame. So I kept digging. There was a great Star Wars tee with stylized images of the characters and a Disneyland logo on the sleeve. Again only $6.99 and again an extra large.

After all the digging through the racks, you may ask what my own personal triumph was at this visit. I eventually found a Disneyland 2016 sweatshirt, very last season, but brand new. It's navy with Sorcerer Mickey and the Disneyland logo in vintage print. The original price on the sweatshirt tag was $39.95. By pure coincidence, I wrote an article in early 2016 about the Shop Disney Parks app, and used this sweatshirt as as example of an item you could by through the app. It was indeed $39.95. I picked up this beauty for the whopping price of $7.99, and it was a perfect size medium. 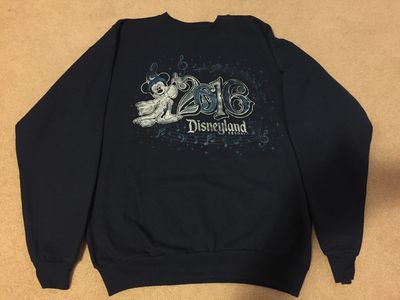 This awesome Disneyland sweatshirt became part of my wardrobe for a whopping $7.99. Photo by Gregg Jacobs.

There were literally hundreds of shirts for kids, adults of all sizes and every park fan, so if you took the time look, you just might have found that perfect item at a great price.

There are bargains to be had at the Disney Outlet, so in sum, I'll again make the point I made at the beginning of the article. The Disney Outlet is well worth the trip as long as you manage your expectations, do your research on prices and don't mind digging around a bit.

Thanks as always for reading. Would love to know your thoughts.

Shopping Tip of the Month

Keeping with the outlet theme this month, there was something else interesting that I noticed. Because some of the goods are from prior years, there are items that haven't been available at the parks or regular Disney Store in a while. For example, there was a fairly large collection of Tsum Tsum. There was an original set of Tsum Tsum featuring the Fab 5 (Mickey, Minnie, Donald, Pluto and Goofy) available a couple of years ago at the parks and stores, that I haven't seen in some time. They were at the outlet, and not only were they there, they were discounted at buy one get one for $2. If you happen to be a collector or are just in search of that item that got away, the outlet is now another place to go if you're trying to find that hard to get item.