Disney Junior Dance Party! is a high powered, video enhanced show with great dancing. A day touring Disney California Adventure should include a visit to this fun show if you have kids aged four to eight in tow. With two great hosts, amazing music, loads of characters, and lots of dance moves, your kids will be beaming from ear to ear (while adults get a nice sit down break). The old show was a bit stodgy, but the new show infused with music and dance at the forefront is hard for even adults to not want to tap your toes. This is a great start for your little ones as opposed to the stage show Frozen which has a long wait and an hour showtime. Disney Junior Dance Party has an easier wait and the show is about 20 minutes, so it's well suited for the little ones. 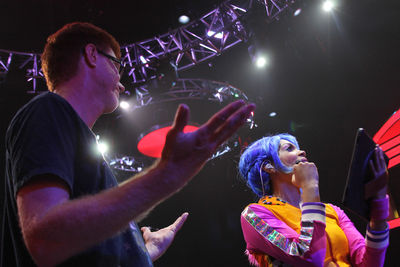 The kids love it when an adult is picked to start the music flowing by the very talented DJ, aptly named DJ. She simply asks the chosen adult to hit the go button on the iPad and twice there are funny sound effects and no music flowing. She then asks that adult to sit back down and picks a kid. The kid pushes the button and the music flows. When her cohort Finn comes out we learn that he has forgotten to invite Mickey and Minnie and all the Roadster Racer gang.

The two hosts are the classic TV characters of the stupid male and the smart, witty, chiding female that we have seen for the past few years, and probably will for quite some time to come. Willa expressed how cool DJ was and Finn was funny because he was always crying and botched things up. She thought DJ was definitely more fun. When asked how the old show compared she really couldn't remember but said that she liked that DJ was added. Despite the amazing video screen and wonderful special effects, Disney casting wins out and the human element is what pushes and drives this show. 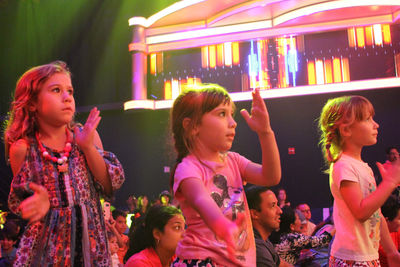 Zaida, Hadley, and Willa learn the choreography from Finn and DJ. Photo by Natalie Diem Lewis.

The emphasis on dancing and choreography wins out also. There are lots of moves, and some are really easy while others a bit trickier. The little ones don't care and groove out to their own beat, but kids like Zaida love getting every move right. After all she said; "I have started taking ballet and tap." Disney Junior Dance Party is also serious business. 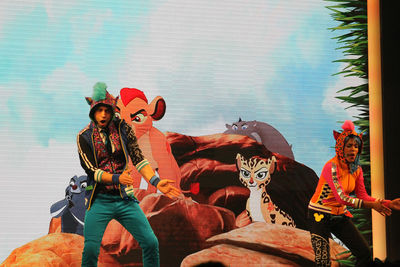 A quick pop up of the hoodie and Finn and DJ are ready to dance with the Lion Guard. Photo by Natalie Diem Lewis.

Even the costumes are simple and go with the flow. A quick pop of the hoodie gives Finn and DJ a terrific mane so they can shake their tails along with the Lion Guard. This is probably the most toe-tapping number in the whole piece and builds to a great climax. The timing and placement of songs in a plotless show are so very important in building tension and excitement, and great care was placed to select these segments for a seamless build.

Hadley and Willa help Mickey and Minnie by driving with them to the Dance Party. Photo by Natalie Diem Lewis.

The transitions between the pieces are brilliant. Mickey, Minnie, and the gang are racing to beat the clock so they don't miss the party. Each time the kids have to help drive them into the finish line. This creates a clear sense of urgency and a great way to build tension. The kids are really into the moves and are really helping the whole story move along. The graphics on the screen are full of racing, crashing, and humor, and Hadley said that that was her favorite part to watch. I'm not even sure if she was aware of how she was driving, but that muscle memory kicks in and the energy flows. 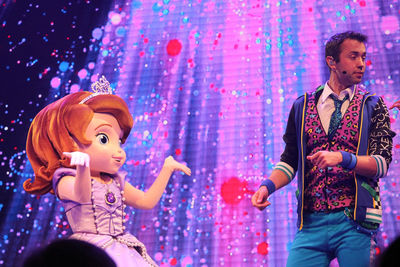 If characters are what you want, you don't have to be disappointed because Sofia makes an appearance along with Timon during the Lion Guard segment. There is also an appearance by Doc McStuffins (Zaida being 7 said that she was over that particular show but had fond memories of her youth when watching it. It was more for her sisters). The characters all come out of the screen and make a quick, fast, and fun appearance.

I couldn't help but notice that while Zaida felt she was a little too old for Doc McStuffins, she couldn't seem to resist the snow that falls during this segment. The girls also really enjoyed all of the confetti that falls during the show, but while it seemed to be their only focus in the previous show the dancing won out this time. During the old show they were merely waiting for the confetti to fall and there were definitely moments of lag time which has been greatly improved with the Dance Party! 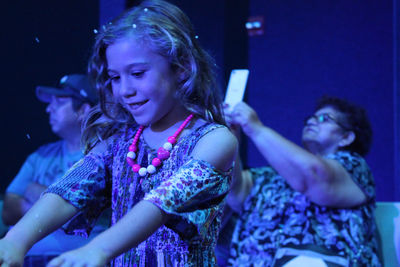 Zaida (and the crowd) cannot resist the fun of snow! Photo by Natalie Diem-Lewis.

Spoiler alert: if you like surprises quit reading at this point. No. I'm serious. I don't want to ruin it for you and your little ones. Ok. I warned you. You still have time to go. No? Ok. I gave you a fair shake. Mickey and Minnie make it to the Dance Party in the end. The crowd goes wild. The end. 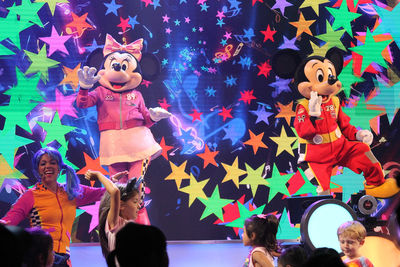 Yay! Minnie and Mickey make it just in time for a last blast dance! Photo by Natalie Diem-Lewis.

When finished the girls wanted to see the show again. There was one more show for the day. It was hot. Very hot. Disney Junior Dance Party Live! was air conditioned. So another go was had. The intensity remained. Hadley said the DJ dance spin was the best move. Willa said it was "awesome and fun," and Zaida was unavailable for comment because she was too busy practicing her new moves. 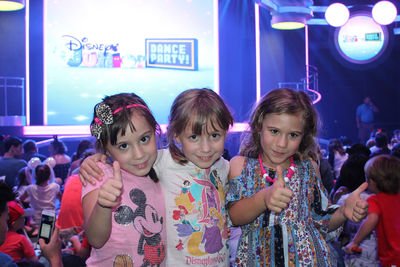 An enthusiastic thumbs up from Hadley, Willa, and Zaida. Photo by Natalie Diem-Lewis.