A Ducky Day at Disneyland

Fall 2017 marked the return of MouseAdventure to Disneyland park. Produced by Third Gate Games and sponsored by MousePlanet, 150 teams found that Donald had taken over and renamed the event DuckAdventure. Once again, the biggest problem of the day was the ongoing parking issue at the Disneyland Resort, which delayed some teams’ arrivals at the pre-game orientation at the AMC Theater in Downtown Disney. 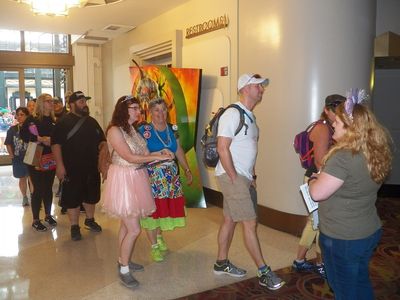 Teams arrive at the AMC Theater for the pre-game briefing. Photo by Aaron Maggs.

Third Gate Games encouraged new teams to check in early by offering a gameplay question-and-answer session with Joe Stevano. In true MouseAdventure fashion, the line in front of the movie theater ran several hundred people deep before the doors opened at 8:30 a.m. Teams checked in with Chris Metzger, then headed into the theater to eagerly await instructions and the pre-game excitement.

Kicking off at 9:00 a.m., David Perry welcomed a packed theater to the 45th MouseAdventure event, and proceeded to thank all the players who had taken part in the other games this year, from MouseAdventure at Walt Disney World, the MouseAdventure Rewind games, and the StudiosAdventure game at Universal Studios Hollywood. After gameplay information from Joe Stevano and a short presentation by Stephanie Wien on the social media contest, the players poured out of the theater to their scatter locations for a game start time of 9:45 a.m. 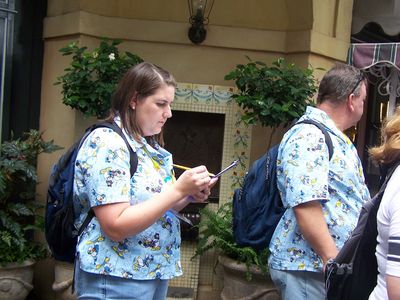 For a very short time during the game, the skies above Anaheim changed from slightly dull overcast to nearly angry rain clouds—but by the end of the game at 4:00 p.m. it was sunny and warm. For once, it seemed like MouseAdventure had broken the weather curse!

Of course, it would not be a MouseAdventure (or DuckAdventure) without last-minute changes in the park. When the game crew surveyed Disneyland the day before the event, two new construction walls had appeared and the price of a churro had increased by 25 cents, necessitating the preparation of some last-minute errata sheets. 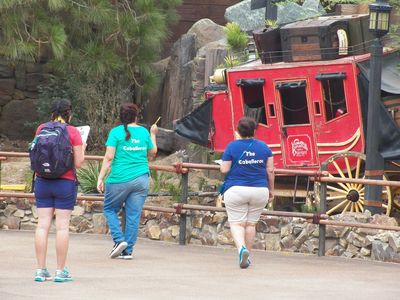 It has been more than a year since there was a full MouseAdventure game held in Disneyland park. The plethora of construction walls meant that a lot of material was missing or hidden, and the Third Gate Games team was very excited when the walls came down. New walkways and a modified Rivers of America area provided many opportunities to send players wandering the nooks and crannies. Teams were sent on a full circle, rail-based adventure to experience the first left-hand turn on a Disney railroad while searching for a sack with a blue star on it (among other items). 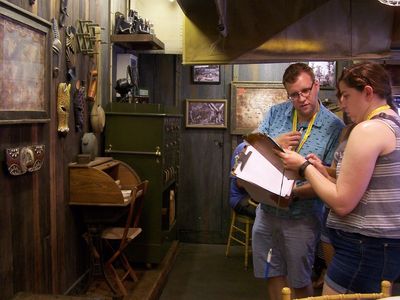 Basic teams solved eight quests plus eye-spies and trivia; advanced teams had two additional quests, plus an increase in difficulty for two of the basic quests. One of the enhanced advanced quests had instructions written by Donald in a series of “quacks,” and the other required advanced teams to ride the Mark Twain to collect an additional piece of information for their final answer. 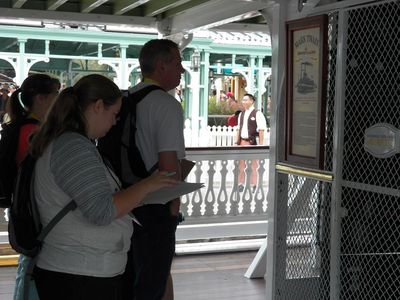 A sign on the Mark Twain reveals the identity of the Queen of the River. Photo by Aaron Maggs.

Each quest name referenced an animated short in which Donald Duck starred or appeared, and most quests featured bird references or bird-based clues to maintain the duck theme. Teams visualized themselves as ducks flying over Fantasyland in order to identify weathervanes and other decorative items atop the land for one part of a three-part quest. An enigma decoder was integral to its final solution, adding a final level of difficulty as teams pointed the decoder to various letters to reveal the final question. 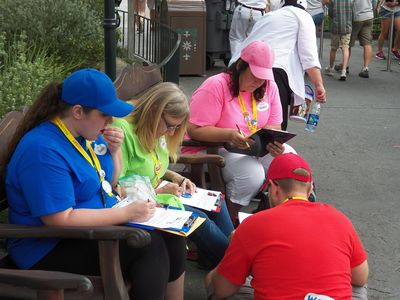 A tour of ToonTown, complete with a trip through Mickey’s house, highlighted the many duck-related items throughout that land. Anyone with an aversion to “it’s a small world” endured the trip to spot the many avian inhabitants from around the world in order to solve that quest. Frontierland’s missing words provided the letters to decode a cipher that sent Basic teams looking for the King of the River, while Advanced teams also had to find the Queen. 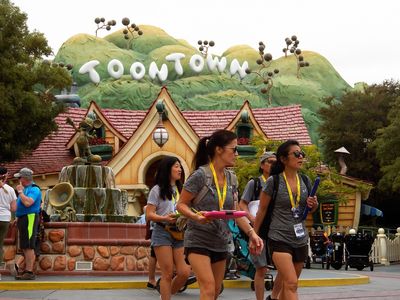 For this game, answers to trivia were worth 1 point, instead of the traditional 2 points. This change produced both excitement and consternation from teams in the pre-game briefing, but reflected a majority opinion from post-game survey results that asked for less weighting on trivia. 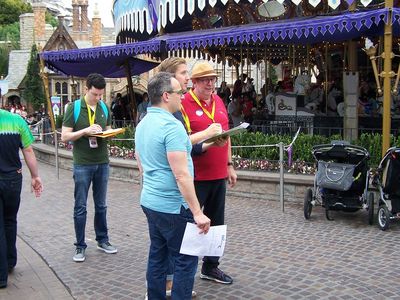 The informal post-game gathering on the Frontier Lawn at the Disneyland Hotel allowed teams to mingle and chat before the awards presentation. Teams were also able to receive their scores and ask questions about the quests.

Full results for all teams are available on the event results page. The total possible points for the Basic division were 385 and for Advanced were 505. A full list of quests with answers will be posted on the MouseAdventure website soon.

The best new team (not otherwise placing) was Disney Dorphies with 311 points, who placed thirteenth in their division on their first game. There were not enough teams to make a full family division for this game, but the highest scoring family team was Team Glitch with 243 points.

Although not eligible for any prizes during non-Invitational MouseAdventure games, many master teams return to compete against one another, mainly for bragging rights and the thrill of the puzzle hunt. Three master teams competed in DuckAdventure. The teams received the following scores: