One of my family's very favorite places to visit while in Disney's Animal Kingdom is Chester & Hester's Dino-Rama in DinoLand U.S.A. Legend has it that Chester and Hester were a couple, who during the 1940s owned a run down gas station along a highway. When dinosaur bones were found on the couple's land, they decided to capitalize on their newfound fame by opening a midway-like attraction, Dino-Rama.

Dino-Rama features old time-y rides, and carnival games (yes, there are prizes!) just like those from days gone by. Opened in 2001 (3 years after Animal Kingdom), Dino-Rama is a perfect break in a long Animal Kingdom day. It is compact so there is no racing long distances to get to the next thing to do, and although one of the rides (Primeval Whirl) takes Fastpass, the wait time is typically short enough that you can just hop on. Spontaneity and hopping right on a ride at Walt Disney World? Sign me up. 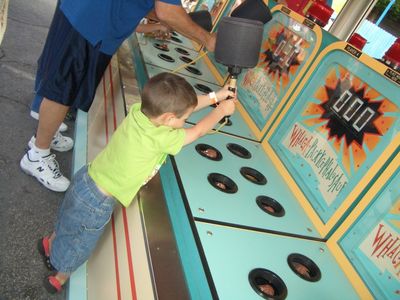 My son (at three) whacks a dino at Chester & Hester's Dino-Rama at Disney's Animal Kingdom. Photo by Donna Fesel

We've loved Dino-Rama since our very first trip to WDW with our son when he as three. He was not tall enough for some of the rides, but he was tall enough (any height can ride) for TriceraTop Spin in Dino-Rama. This ride is essentially a dinosaur-themed version of Dumbo at Magic Kingdom, so even your littlest family members can enjoy a ride. You use a joystick to make the car move up or down. My then three-year-old loved being in control of the triceratop's movements. 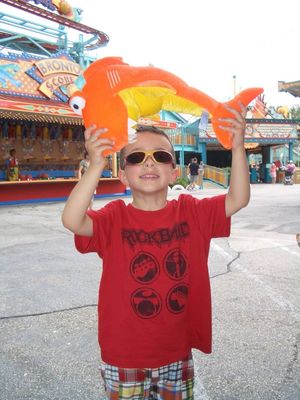 My son (last summer) at the toss game at Chester & Hester's Dino-Rama at Disney's Animal Kingdom. Photo by Donna Fesel.

To play, you purchase tickets from one of the Dino-Rama cashiers. The cast members will begin a game as long as three people are present to play. That means if you have three people in your family, there will be a winner in your group. It's fantastic for those little ones who try their hardest, and can win one of the adorable stuffed animal prizes. My son won a cute dinosaur on his first trip, and has brought back a Dino-Rama "guy" from every subsequent trip. I really think the Fossil Fun Games have something for everyone, and kind of like the Shooting Arcade at Magic Kingdom, offer some good old competitive fun, and a low-key breather from racing to make a Fastpass. 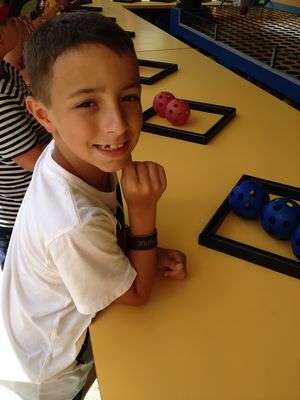 The other ride in Dino-Rama is a favorite of ours. You have to be 48 inches to ride this double-tracked old-fashioned spinning coaster themed like a time machine, Primeval Whirl. As I said above, the Whirl accepts Fastpass, but the longest we've ever waited (during a crowded spring break) was forty-five minutes. We usually just ride stand-by. If the line is long we play a few carnival games and hop back on. Easy peasy.

Your party is seated in a round car, and spins at different speeds as you ride up and down on the coaster itself. It is no Space Mountain, but it isn't trying to be. It is a kitschy nostalgia ride that fits right in with the casual roadside theming that pervades Dino-Rama. It's not for those who get dizzy easily, but if you do not, it is a fun way to pass a bit of time. 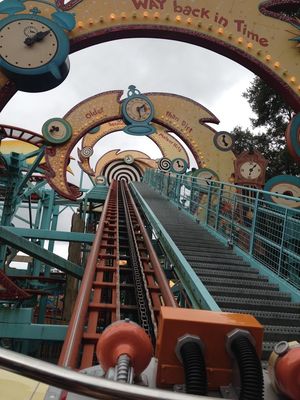 In short, my family highly recommends Dino-Rama. It's perfect for all ages, and comes in especially handy with groups of varying ages. Do you love Dino-Rama? What are your favorite attractions? Let me know.