My Disney Top 5 - Things to See in Epcot's Germany Pavilion

It would be perfectly feasible to say that when I married my wife, I became an honorary German. I never abandoned my own Italian/Irish/Hungarian heritage but it's next to impossible to not adopt some German ways and customs when you marry into such a traditional family. Diane is 100% German. Her family is predominantly still in Germany. The few that are here are very, very German. Considering all that and considering that we've been married for 21 years, sometimes I actually feel German by proxy and I'm perfectly all right with that.

Surprisingly, I've never actually been to Germany with my wife. She's been several times since we married, but I never seem to be able to make the trek with her. I have been with her on vacation in Austria, which as you might suspect is pretty darn close. There was one unforgettable moment in a mountain village outside Salzburg. We were staying in this incredibly charming Bavarian style inn. Diane found a bench outside nestled amongst some of the most beautiful bursting flower gardens typical to that region. She had some of that killer Austrian coffee and sat there soaking in a truly awe-inspiring view of the Austrian Alps. It was at that very moment where I saw my wife completely at home. She belonged in that spot. It was made for her. I imagine that when she's actually in Germany, she has that feeling everywhere she goes.

The closest I've ever seen her capture that moment on American soil is…surprise, surprise…when we're in Epcot's Germany pavilion. So, it's no surprise that when we're spending time in World Showcase, the wonderful German pavilion gets much of our attention. It's become one of our favorite spots in Walt Disney World and it would feel completely wrong if a trip passed by without time spent in this beautiful pavilion. Let's take a deeper look with my Top 5 things to see in Epcot's Germany pavilion.

The main focal point of the Germany pavilion's plaza is the impressive statue of St. George fighting the dragon that towers over a picturesque fountain. This has long been my favorite spot to sit in Germany, more often that not with a cold Altenmunster Oktoberfest beer in one hand and a hot pretzel in the other. 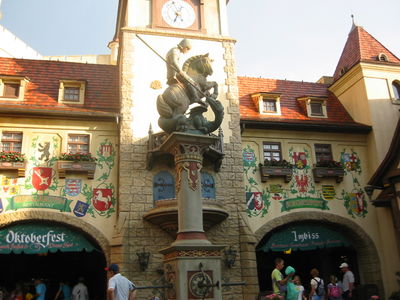 The German pavilion in Epcot features this beautiful statue of Saint George. Photo by Chris Barry.

Take the time to sit here and watch the ducks that sometimes hang out in the fountain while you look across the platz at the classic German architecture that makes this pavilion so special.

This may very well be my favorite shop in World Showcase. I've always been a sucker for a toy store and not the giant Toys R Us variety, but the smaller, more traditional toy store that you might find in a quaint village somewhere. The inside of Der Teddybar fits that description just perfectly. 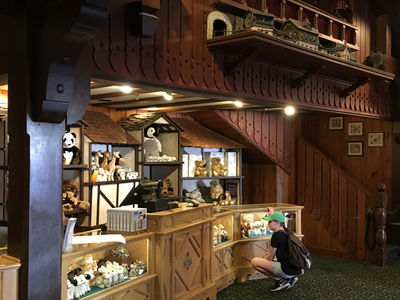 This is the place to get some unique toys like Playmobil, Smurfs, dolls, and most importantly Steiff stuffed animals. You are probably familiar with the classic Steiff bears that have the metal button in their ears. It's become a tradition for me to buy Diane a new Steiff each year that we visit Walt Disney World. Don't be too impressed with me just yet. I have yet to buy her one of the $500 stuffed animals. You can buy those at Der Teddybar, but you can also buy the $29 variety as well. The expensive ones rotate and there have been some awesome ones over the years including classic Disney characters and my favorite Steiff of all time, Kermit the Frog.

This would have to be my wife's favorite shop in the pavilion. That honor used to go to Glas Und Porzellan, the shop which sold Hummel and Goebel figurines, but that's been taken over by the yummy caramel shop. She'd rather have Hummels. I have to admit, I rather enjoy the caramel! Kunstarbeit in Kristal has always had a special place in our lives. 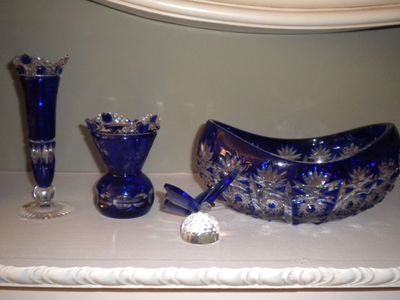 Just a few pieces of the crystal collection my wife has purchased from Kunstarbeit in Kristal. Photo by Chris Barry.

Diane has amassed an impressive collection of German blue crystal from Kunstarbeit that can only be purchased in the United States at this shop and the Arribas Brothers shop on Main Street USA in the Magic Kingdom. We've all bought things from Kunstarbeit over the years whether its Diane's crystal, my daughter's glass princess figurines, or my pewter Disney train set. It's not a Disney trip unless we spend some time in this shop even if it's just to look at the $37,500 crystal Cinderella Castle.

No visit to Germany would be complete without a meal in the Biergarten. Arrive hungry because it's an all you can eat buffet and German food has never been known for its lightness. It's definitely not all about the food though. Biergarten scores high points in World Showcase for its truly unique setting. Much like the Mexico pavilion's San Angel Inn, it's eternally nighttime at Biergarten. You sit in what appears to be an outdoor dining plaza at large tables of 8—even if your party is smaller than that. This is a "get to know your neighbors" kind of place, much like an actual Munich beer garden. Once the German band starts playing, you've left Florida behind and arrived in Bavaria. 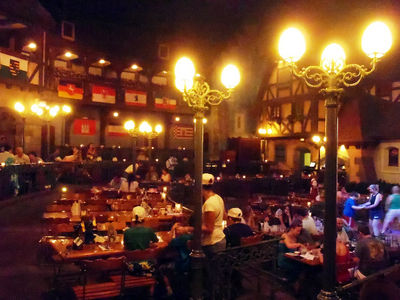 The food at Biergarten is some of my favorite in World Showcase. Try the sausage salad, bratwursts and sauerkraut, spatzle, roasted potatoes, German potato salad, schnitzel, pretzel rolls, and my favorite the leberkase or German meatloaf. No self-respecting German restaurant would be complete without two things, a delectable apple strudel for dessert and beer. Make sure the monorail is taking you home and order an entire liter of delicious German beer—I suggest the Schofferhofer Weizen—and your night at Biergarten will be complete.

One of the real treasures in World Showcase is the Epcot Garden Railway just to the right of the Germany pavilion. Originally installed for the 1995 Epcot Food & Wine Festival, the trains proved so popular that they became a permanent part of the pavilion. The miniature train and village is one of Disney's true small wonders, packed with details and fun to explore. 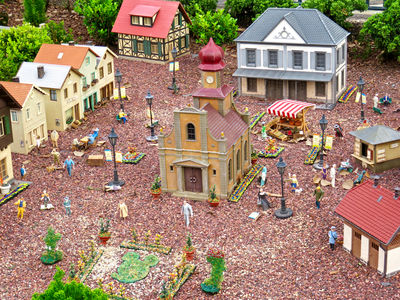 The town along the miniature railroad near the Germany pavilion appears to be having its own version of the Epcot International Flower & Garden Festival. Photo by Alan S. Dalinka.

One of the best things about it is that it's constantly changing. The Imagineers move the villagers and animals around. They even add details to fit in with the holiday season and topiaries during the International Flower and Garden Festival. It's a great way to spend some time in the Germany pavilion and would no doubt be a favorite of one of the biggest train buffs of all, Walt Disney himself.

When we make that turn into the plaza of the Germany pavilion to see the charming Bavarian architecture and we hear the traditional German music in the background, we all seem to get happy. Maybe it's my wife and the connection to her heritage. It's a part of her that I love and adore so much because it's at the very core of who she is. But I think it goes beyond that. It's just a very happy place. All of World Showcase is happy, as well as all of Walt Disney World for that matter, but there's just a little something extra special about the Germany pavilion.

The music, the flowers, the architecture, the delicious food—it all combines and ends up making you feel very happy and very at ease. I like to think that it would have become one of our favorite spots even if my wife didn't have a special connection to it. We always end our Epcot day watching Illuminations from Germany. You practically have to pry us away from the pavilion after the show ends. To us, it's that special of a place.

As always, I'd like to hear your thoughts on my list and what you like best about Epcot's Germany pavilion. Click on the link below, let me hear what you have to say and I'll see you next time as we make our way around World Showcase to Italy.