Halloween Time at Disneyland is always full of hauntingly tasty treats, characters with tricks up their costumed sleeves, and a never-ending queue to visit Jack Skellington at Haunted Mansion Holiday. While the scary sweets still beckon me (the pumpkin cheesecake at Jolly Holiday Bakery and Cafe is a must), this year I opted to depart from my typical Halloween doom-buggy ride at Haunted Mansion Holiday, and checked in to the Disney's Happiest Haunts Tour. This is one of four guided tours Disneyland currently offers to guests.

Tour participants met at the The Tour Gardens next to City Hall 30 minutes prior to our deathly departure. We were given headsets and earbuds to follow along with our ghoulish guide during our two-hour tour. Every year, the tour has a specific theme — this year's theme focuses on Halloween's origins and spooky stories, and how Walt Disney incorporated many of these tales into his films and throughout Disneyland. Our villainous tour icon was The Magic Mirror from Snow White and the Seven Dwarfs.

​Our first stop was at the Main Street Cinema where our guide paused to point out the festive Halloween decor adorning Main Street. 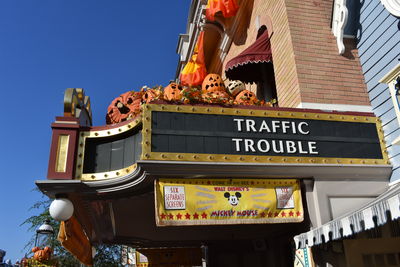 While inside the theater, our guide, with the help of The Magic Mirror via audio, shared some classic horror influences now iconic with Disney. The first Silly Symphony Walt released in 1929 was Skeleton Dance — a black and white short featuring four skeletons dancing in a graveyard reminiscent of the medieval "danse macabre" or dance of death. (Although Skeleton Dance ​is not currently showing in Main Street Cinema, guests can still enjoy Walt's first animated releases including Steamboat Willie). Another devilish influence very recognizable in Disney lore is the release atop a bald mountain of the dark, winged creature known as Chernabog in Disney's 1940 animated release Fantasia. Chernabog today remains one of the most popular Disney villains.

Our next haunt was to none other than Haunted Mansion Holiday. Although we didn't check in with the 999 ghosts and visiting residents of Halloween Town, we did learn a bit about the background of The Haunted Mansion, courtesy again of The Magic Mirror. The most current rumor consists of a departed sea captain, who now in his ghostly state, likes to "hang" around during a certain elevator ride inside the mansion. Along with this story is Constance the Bride (with a beating heart) who murdered five husbands during her stay in the mansion. She, in fact, is one of the stretching portraits inside the elevator; she is sitting atop her last husband George's gravestone. 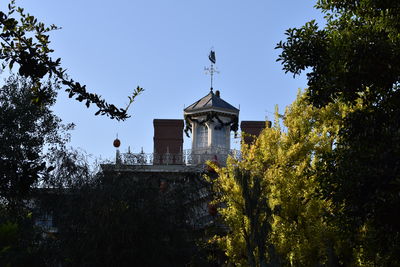 The ship weather vane is a tribute to the sea captain who still haunts his mansion. Photo by Lisa Stiglic.

Of course the biggest draw each Halloween season at Disneyland is the mash-up of The Nightmare Before Christmas and The Haunted Mansion. The two worlds collided in 2001 when Disney Imagineers decided on a second holiday-themed attraction after the success of "it's a small world" Holiday in 1997. Every year since then, Haunted Mansion Holiday's theme slightly alters, including the centerpiece on the ballroom dining table. This year is all about the Boogie Man — a 7-foot-tall gingerbread Oogie Boogie. 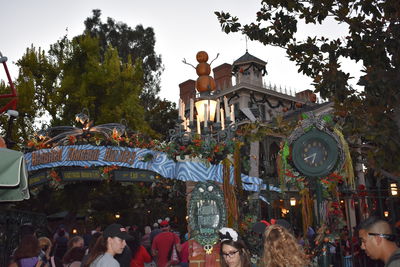 Crowds wait in long queues to ride the doom-buggy which will take them into The Haunted Mansion Holiday. Photo by Lisa Stiglic.

On to Frontierland, where we stopped next to a stately oak tree dripping with brightly-colored Jack O'Lanterns. Sci-fi writer Ray Bradbury was a Disney friend and fan who penned a story titled, "The Halloween Tree". 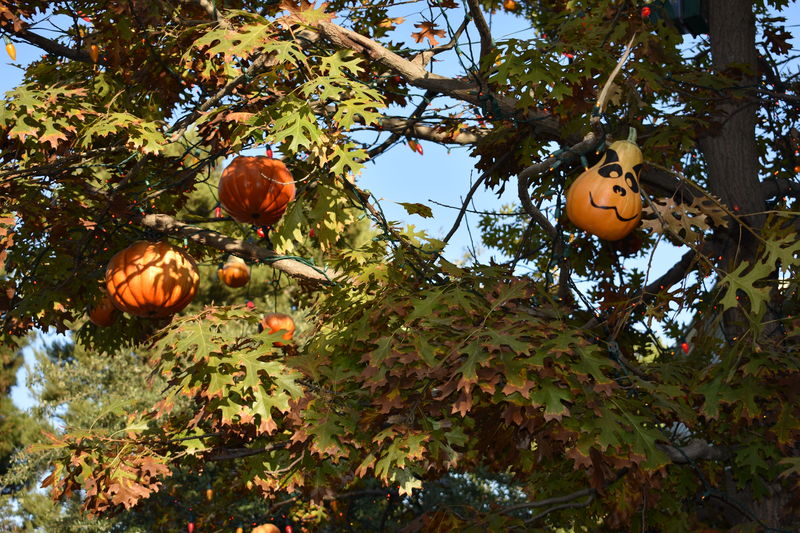 The Halloween Tree was added to Disneyland in 1997 in remembrance of Ray Bradbury and his friendship with Disney, both Walt and the theme parks. Photo by Lisa Stiglic.

The Magic Mirror then beckoned us to listen closely to the story about to unfold. Our guide took her cue and began telling us a very familiar tale about a bookish school teacher by the name of Ichabod Crane. In The Legend of Sleepy Hollow by Washington Irving, the Headless Horseman is a darkly evil character pursuing our hero Ichabod. Ichabod, unfortunately, succumbs to the Horseman, never to be seen again. In 1949, Disney adapted the story and released The Tales of Ichabod and Mr. Toad, an animated version of both The Legend of Sleepy Hollow and The Wind in the Willows. And both of these stories have their places in Disneyland. Mr. Toad's Wild Ride is in Fantasyland and The Headless Horseman not only resides in Disney California Adventure Park during Halloween Time, but he kicks off the Frightfully Fun Parade during Mickey's Halloween Party nights. 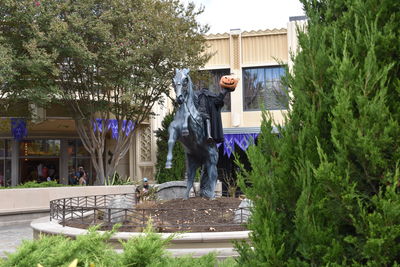 The Headless Horseman awaits his next victim at Disney California Adventure Park. Photo by Lisa Stiglic.

Our tour concluded back at The Tour Gardens with a quick visit from two iconic hitchhiking ghosts (a photo op I missed unfortunately) and a collectible skeleton key, of course. 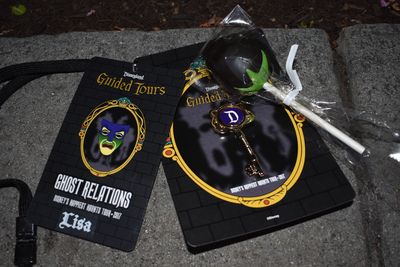 An individualized lanyard, the tour pin with Magic Mirror icon, and a dark chocolate "dead" rose make up our parting gifts. Photo by Lisa Stiglic.

Overall, the tour was informative and entertaining, but at a steep price of $85 per person ($72.50 with AP discount) probably not worth it. Although we were offered a Fastpass to The Haunted Mansion Holiday, the tour would have been validated had we our own group-only ride on either the Mansion or Ghost Galaxy (Space Mountain), or a peek at the animal cemetery behind The Haunted Mansion (available with the VIP tours).

I would suggest saving your money and exploring Halloween Time at Disneyland on your own or looking into one of the other guided tours offered. Choose from Walk in Walt's Disneyland Footsteps — a historical look at Walt's life and his creation of Disneyland; The Grand Circle Tour — how Walt's passion for trains impacted his career achievements; and Holiday Time at The Disneyland Resort Tour. I opted for the Holiday Time tour last year and thoroughly enjoyed it from the holiday stories of Disney to the front row seating at the parade complete with hot cocoa and cookies.

For information regarding tours or to book one, call 714-781-8687. The Holiday Time at The Disneyland Resort Tour will fill up quickly. Currently, if you are interested in the Disney's Happiest Haunts Tour, which runs through Halloween, spots may still be available so call to confirm. All guided tours cost $85 and AP discounts apply. Happy Halloween!