Otherwordly Goods from Pandora - The World of Avatar

Yes! At long last, after 10 months away, I finally made it back to the World, with the primary goal of checking out Pandora – The World of Avatar at Disney's Animal Kingdom ("Pandora" for short). For my first visit, of course I wanted to ride Flight of Passage (which was mind blowing), ride the Na'vi River Journey (short, but incredibly beautiful with tons to see) and marvel at the famous floating mountains. But with me being me, I also needed to check out the goods. What otherworldly items was Disney importing from the far away moon of Pandora to sell us?

While there are a couple of merchandise carts spread through the land and there are Pandora goods in other Animal Kingdom locations, the main merchandise location within Pandora is Windtraders. In perhaps a first for Disney, you really have to look to find it. It's tucked into a back corner, spitting distance away from the entrance to Flight of Passage, the land's signature attraction (though in a return to Disney form, you exit the attraction right through, you guessed it, Windtraders).

What I found when I eventually got there was a larger shop best described as a cross between the Rainforest Cafe shop and a store in Magic Kingdom's Frontierland, with a couple of unique experiences thrown in.

The overall feel of the shop keeps with the army barracks vibe punctuated with otherworldly Na'vi touches used throughout the land. There's netting hanging from the ceiling as well as what appears to be native plant life spread throughout the shop. 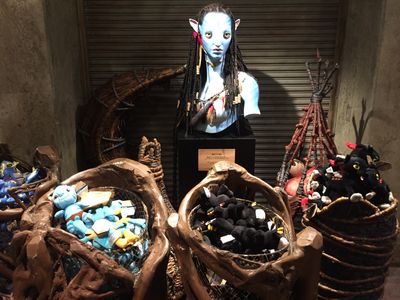 One of the more interesting sights in the shop was a bust of Na'vi princess, Neytiri, overseeing baskets of plush. Photo by Gregg Jacobs.

There were many of the usual suspects in the merchandise mix, with no shortage of T-shirts, jackets, mugs, plush, and key chains. Although I have to have a new T-shirt to commemorate the occasion of a new world opening,  going to focus on some of the more unique items, of which there were quite a few.

The first thing to catch my eye upon entering the shop was a sign that said "rocks for $4.95." While they were very pretty (and of course, from the other side of the galaxy), what ran through my mind was how I could get rocks at home for free. 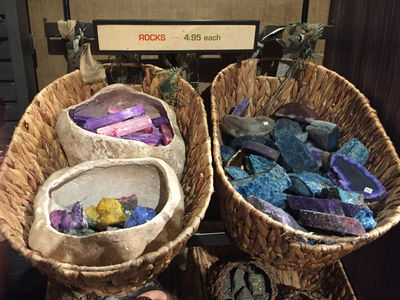 This sign simply says "Rocks $4.95 each." Photo by Gregg Jacobs.

One of the watch words of Pandora is "bioluminescence." Everything seems to glow. In keeping with that theme, there's a large section of glow-in-the-dark merchandise. While there is plenty of glow-in-the-dark clothing, the winner here is the bongo drum. Perhaps a foot in diameter, the base is a basket pattern in an attractive faux wood. The cool part, however, is the drum head, which glows in the dark or under a blacklight. There are actually larger versions of these in the play area of the land. Here's a smaller version you can take home for $24.99. 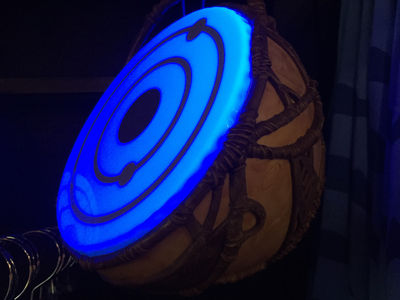 You can buy a small version of the bongo drums in Pandora's play area. Photo by Gregg Jacobs.

The reason the shop reminded me of stores in Magic Kingdom's Frontierland is the large wall of Na'vi weaponry for sale. These are more of the bow-and-arrow-and-knife variety than the gun variety. The largest item is what they're calling a Na'vi Glow Bow, which has light-up effects on the bow and tips of the arrows. A bit pricey at $29.99, but a fun item if this is where your interests—or that of your little one—lie.

Towards the back of the shop is a large Na'vi tree surrounded by several different stands where you can build your own Na'vi necklace. You take a cord and fill your necklace with a variety of beads in different shapes and sizes, as well as "crystals" and feathers. These are cute and a great collectible for Avatar fans or for the little ones, who'll get a kick out of making their own jewelry. $19.95 gets you the necklace cord, eight beads, and either a feather or a crystal. If you want to add more than that, you can pay each additional item. 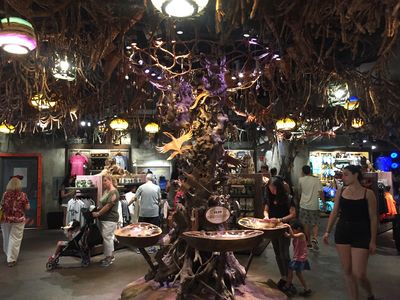 There's a large Pandora tree towards the back of Windtraders surrounded by stands to make your own necklace. Photo by Gregg Jacobs.

For people who are die hard Avatar fans or enjoy collectibles, Windtraders offers a variety of figurines. The one that jumped out at me was a figurine of a leonopteryx skull (the definition that came up on Google was "The great leonopteryx is a species of airborne predatory animals native to Pandora"). Translated, don't go crazy looking up the paleontological history of these. But for die hard fans of the film or Disney Parks collectors, it's a fun item, and yours for $34.99; not bad in the Disney figurine pantheon. 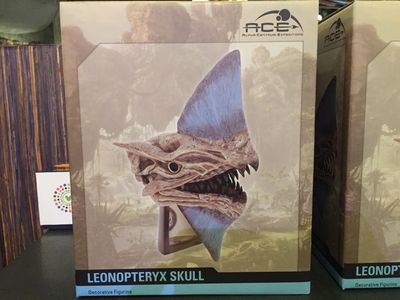 You can bring home a leonopteryx skull from Pandora. Photo by Gregg Jacobs.

Lastly, falling under the category of cool items I just needed to have for some reason, was a massive mug in the shape of the Pandora floating mountains. Not exactly a bargain at $22.99, but just one of those cool things you wouldn't be able to find anywhere else. 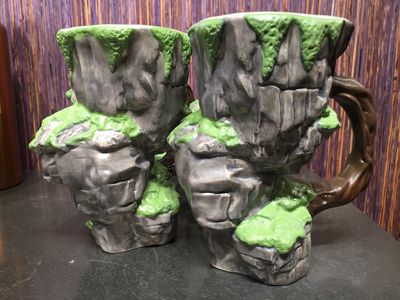 You can get this unique Floating Mountains mug at Windtraders. Photo by Gregg Jacobs.

Windtraders also has two rather unique experiences: The first is the baby banshee adoption you've likely seen all over the Internet. As you enter the shop, the first thing on the left is the banshee area. There's a wall filled with Banshee "hatchlings" in many different color schemes. You wait in a separate line until it's your turn, then they take people in groups of five or six. We only waited about 10 minutes the day of our visit. 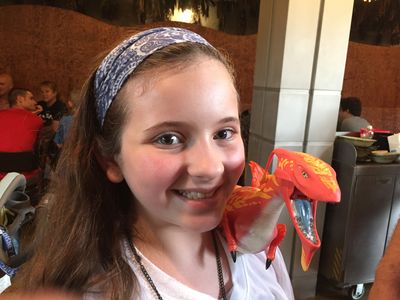 You can have a banshee of your very own to perch on your shoulder. Photo by Gregg Jacobs.

When the time comes, the cast member brings you in and explains how to care for your new banshee baby, and also offers a demonstration. They are mechanically operated, with a remote control connected by a long cord to the back of the banshee. By using some simple controls, the creature can open and close its mouth, turn its head, look up and down, and flap its wings.

At the end of the explanation and demonstration, the cast member asks you to look at the wall and point to the one that you want. I was with my young niece, who selected one in orange and yellow. Another boy pointed to the same one, but it wasn't an issue. You don't take the one on the wall, but rather, the cast member brings you a box from the banshee rookery with the banshee in your color scheme to you.

The banshees run for $64, including tax. They are cute and appear to be relatively well-made; they amused my niece and nephew (aged 11 and 2, respectively) for a good chunk of the day. My niece promptly named hers Mr. Bibbles, and it currently sits in a place of honor in her room at home.

The next experience is the Ace Avatar Maker, described by Disney as a customized and personalized merchandise experience. The storyline here is that you can, though a scientific process, have an avatar made in your own image like in the movie. In true Disney storytelling fashion, they make a big deal out of the experience. The cast member explains the technology to to you before taking a scan of your face and asks you what characteristics you want your avatar action figure to have. They show you an image of what it will look like, and if you're happy with what you see, they give you a ticket and ask you to return in about 45 minutes to pick it up. 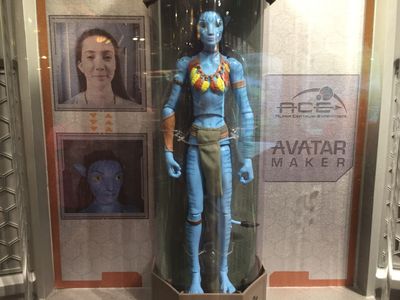 You can get an avatar in your own image at Windtraders through Ace Avatar Maker. Photo by Gregg Jacobs.

When it's time to pick it up your avatar, they again make a show about presenting it to you. You have to scan your hand to make sure you are the true DNA donor, and then a machine produces your very own avatar. The experience is pricey at $79.95 plus tax, but the action figure is kind of cool and as they often do, the enthusiastic cast members really make an experience out of it. Again, for a child or a die hard fan of the movie, this is a must-do experience.

Although you can buy Pandora merchandise elsewhere at Animal Kingdom (there was a big wall at Island Traders, for example, consisting of mainly hats and T-shirts—so if you want to wait to buy and shop more casually around the park, you certainly will have the opportunity), if you want some of the more unique items, you have to get them here.

All in all, I enjoyed my time at Windtraders, and it can take its honored place among Walt Disney World's primary merchandise locations. Perhaps holding it back from total greatness was the fact that the theming could have been a little more absorbing, and the feeling I got that I had been there before (like they put a Na'vi overlay on an Adventureland or Frontierland shop). That said, it's definitely worth a visit, if only for the banshee babies and custom avatars, which can't find anywhere else.

Shopping tip of the month

For this month's shopping tip, I'm going to explore the theme of never giving up.

Epcot celebrated its 35th anniversary this past October 1. I was at Animal Kingdom researching this article that day. While in line for the safari, I saw a man wearing an Epcot 35th anniversary T-shirt. The shirt had the Epcot 35 logo, with Figment's heading sticking out through the "O", the image of Spaceship Earth, and the words "I was there!" along with that day's date, "October 1, 2017" across the bottom. I asked him how he got it, and he said he waited on line for over two hours at the Epcot 35th anniversary pop-up shop early that day for the opportunity to buy it and other day-of-anniversary merchandise. Of course I was inwardly raging with jealously, but I wrote it off as a missed opportunity, and had a great safari.

The next day, I went to Epcot to enjoy the Food & Wine Festival. I took my usual stroll through Mousegear, and lo and behold, there were racks of Epcot 35th anniversary merchandise, including the October 1, 2017 T-shirt the man was wearing the day before. There were also other shirts, mugs, and commemorative items that were supposedly only going to be available the actual day of the anniversary (and others meant to be available for a while).

The lesson to take away from this experience, dear readers, is that even if you don't feel like waiting hours in the hot sun for a chance to buy some goodies or just happen to be in a difference place on the day they're available, doesn't mean you won't get a chance to find them (as is evidenced by the Epcot 35 T-shirt I bought, though not the one with the October 1 date).

Thanks for reading and will catch you next time.