Walt Disney World's Columbia Harbour House is billed as a quick service, now with mobile ordering. Its proximity in the Magic Kingdom to Liberty Square and Fantasyland means it's almost always busy. Ample seating is available if you're willing to brave the stairs with fully laden trays and scampering children doing their best to take you out at the knees. 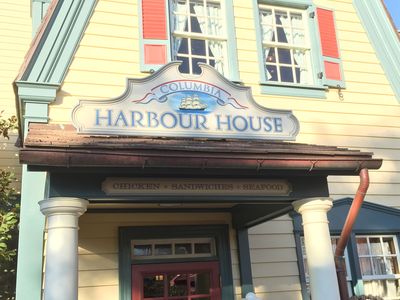 Across the way from the Haunted Mansion, Columbia Harbour House awaits. Photo by Roan Poulter

Theming would be something straight out of the Boston Tea party. Aside from that, there seems to be little tie in with Disney IP. Hosts will generally offer a menu for perusal while waiting in what can, on busy days, be a substantial line. Food is placed on a tray and you are left to find a table. It's a highly efficient—and aggravating to tears—way of feeding the masses. There are few things more entertaining than dodging hordes of unsupervised children while you play Maze Runner trying to find some distant table you sent your children to hold. Then there's the issue of the second floor, often leaving me twitching with inconsolable rage by the time I find my clan.

The food is good for quick service, with several items rating above average, especially considering the company they keep at the Magic Kingdom. Of the quick-service restaurants with ample seating, this is about as good as it gets.

The menu includes some standard fare (legally required to carry chicken nuggets if less than 100 yards from Fantasyland) with some absolute knocked-out-of-the-park items hidden below.

Those with food allergies beware, know your options before you get in line or be handed a book giving food allergy and ingredient lists at a level of complexity one step above Japanese stereo instructions. Do you sense frustration? I suggest you ask for the book and see if it soothes you to study while holding up the line.

The food allergy protocol can be an upfront disappointment, but don't be dissuaded, there are some great food options. The lobster roll, though a tad heavy on the mayo for me, is a fan favorite and contains some epic chunks of lobster. The fried selections have seen too much time since they were cooked, but not so much that they are rubbery. This is a location where your choices and research can really pay off. Here's what we had: 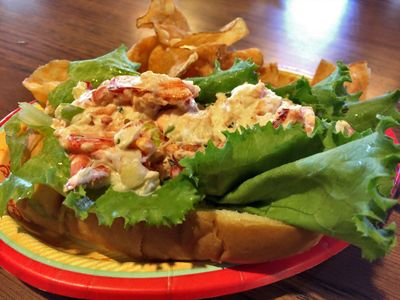 It wouldn't be New England without lobster, pronounced LOBSTAH. Photo by Roan Poulter

Lobster Roll: $14.99. Chilled lobster with a touch (cough) of mayonnaise on a New England-style bun, served with house-made potato chips. If you've never been to Maine, this is wonderful. The seafood is good and the bun is pretty good. It's really the mayo that keeps this off my must haves list. Also, it's expensive for the quantity of food, which is tough to split if you're hungry. The house-made chips are fantastic, crunchy, and salty. 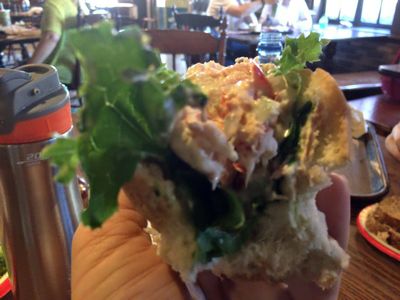 An interior view of the lobster roll detailing the chilled deliciousness. Photo by Roan Poulter 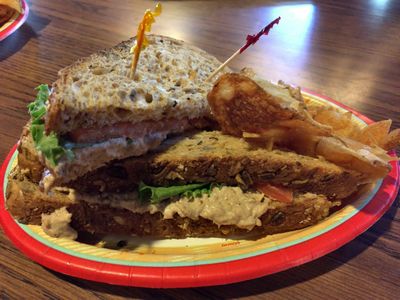 The top choice however is the tuna. Photo by Roan Poulter

Anchors Aweigh Sandwich: $11.19. White tuna salad served on toasted multigrain bread, topped with lettuce and tomato, served with house-made potato chips. This might well be the best thing on the menu. The multigrain bread, some of the finest bread in any Disney park, gives a firm texture base to a flavorful and never soggy bed of tuna salad. I realize that it might be hard to get excited for a tuna fish sandwich, but if you like tuna salad, you'll love this. 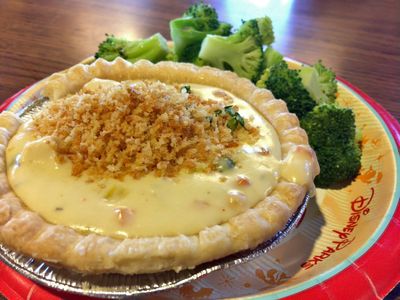 Not as good as the other choices, the pot pie is a good warmup on a cool day. Photo by Roan Poulter

Chicken Pot Pie: $10.99. Flaky pie crust filled with chicken breast and vegetables in a creamy sauce, served with steamed fresh vegetables. More items must come together in a chicken pot pie than most people think. The crust must be rich and firm enough to resist becoming soggy from a creamy chicken mixture that must be flavorful. The crust is acceptable, however we found the filling to be over processed and thinking it came straight from a can. The pieces of chicken inside were sufficient and fresh, however the sauce's oversalted and uninspired flavor mars what could have been a very tasty dish. The crumbles on top do help, but they're a bandage on a sauce that needs to be started over from scratch.