As a longtime Walt Disney World visitor, sometimes I pass by a restaurant without ever giving it a second thought, and occasionally one slips through the cracks. For whatever reason, 50's Prime Time Café is that place and, I can tell you, I made a huge mistake. 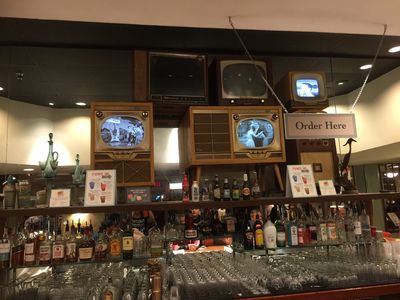 A full bar awaits, the Tune Inn Lounge, if you can snag a seat. Photo by Roan Poulter

Let me preface my review by saying that I visited on the day after Christmas, which if you spend any amount of time in the parks, you know this is traditionally one of the busiest days of the year. Nonetheless, we were able to secure a 7 p.m. reservation for four people. I do believe that my lack of planning occasionally works out as, when families cancel, you can be the unwitting recipients of a last-minute Christmas gift. 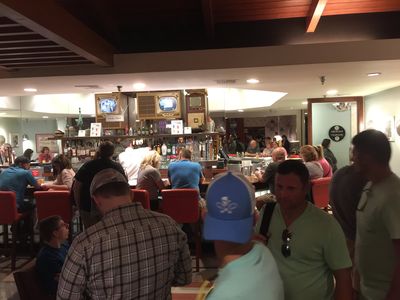 I might think the waiting area has more charm when it's not filled to the brim with tourists. Photo by Roan Poulter

Just walking in I was excited: The décor is spot on for the stereotypical 1950s household, or so television has programmed me to believe. On any other day, this would have been a fantastic exploration of details, but with wall-to-wall tourists hoping in vain to hear their name called, or that someone at the bar would die and they could take their seat, my cherub-like demeanor evaporated fast. 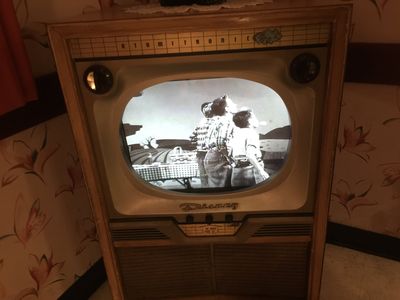 Who knew Disney made televisions? Photo by Roan Poulter

After a 25-minute wait, even with a reservation, I was a seething cauldron of rage fire when we took our seats. I was looking for a reason to spout vitriol and bile at some poor overworked server. The fuse was lit, just waiting to blow. 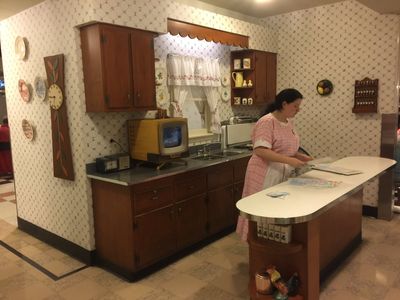 Aunt Betty had her work cut out to make up for the wait. Photo by Roan Poulter

However, our server showed up and his enthusiasm and humor almost instantly won me over. His instant familiarity, built into the server's part I'm sure, made me see how ridiculous my anger was and I was happy to let it go. 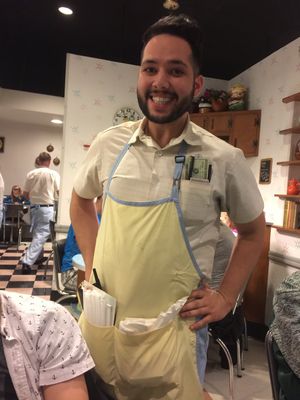 Mr. Jackson here made our meal something special - Photo by Roan Poulter

The menu focuses on home-cooked meal selections, comfort foods that loving grandmothers made us to show love and an indifference to our future LDL levels. Meatloaf and pot-roast gravy feature prominently, with only a couple of selections in what I might consider the "healthy" bracket.

But on a cold day in December, after battling crowds and thinking we had made a terrible mistake, this was just what the Doctor ordered. The fact that each of the items we ordered was prepared to the highest standard was almost a Christmas Miracle.

Beer-battered Onion Rings and Horseradish Sauce: Some fool might say that anyone can make good onion rings. That person is wrong, however, the 50's Prime Time Café can make fantastic onion rings. The beer batter was freshly applied and cooked to just the perfect mix of crunch, yielding to a properly cooked onion that breaks off neatly. I despise uncooked onions that come sliding out of the rest of the ring. This was, in truth, some of the best onion rings I have ever had and I do not say that lightly. 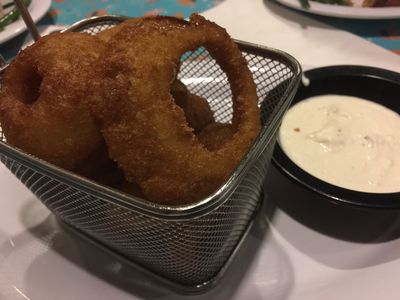 These onion rings were a true tour de force. Photo by Roan Poulter

A Sampling of Mom's Favorite Recipes, Golden-Fried Chicken, Fork Tender Pot Roast, and Traditional Meatloaf (with all the fixings): I'm not sure how to start this other than to say that every single item on this sampler plate was exceptional. The fried chicken reminded me of the Plaza Inn in Disneyland Park, simply perfect. Crisp skin without undue greasiness, perfectly seasoned and nearly left gnawing on the bone. The meatloaf was a little on the bland side and needed ketchup, but that seems an honest recreation of my grandmother's meatloaf. The pot roast was fork tender beef in a hearty gravy that also smothered a generous helping of real mashed potatoes with fresh green beans so we could all pretend it was a balanced meal. 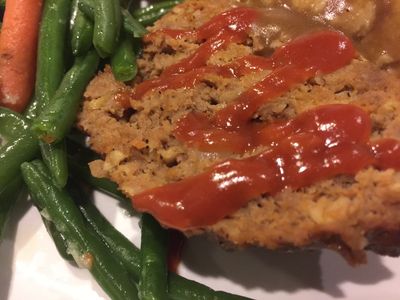 The meatloaf was just like Grandma's. Photo by Roan Poulter 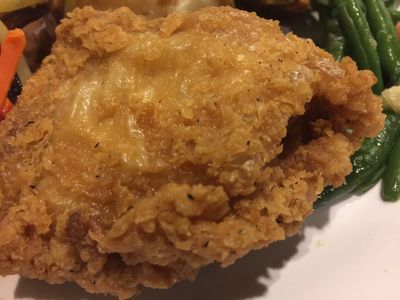 As good as my memory of the Plaza Inn in California. Photo by Roan Poulter 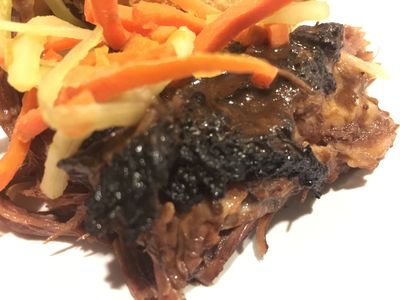 The real standout however was the pot roast, absolutely perfect. Photo by Roan Poulter

Now, I rarely talk about plussing, a bonus, or freebie given by a Disney Cast member, as they are not to be expected, rather savored and cherished when they happen. However, as this one concerns this meal I will share. The table next to us was given a sampler plate by accident, the girl had ordered soup it seems. The waiter came to take it away, offering the fried chicken to the mother. Then he casually leaned over, having possibly noticed that I had licked my plate clean and asked me if I wanted the rest. I, of course, agreed, forgetting that we split plates not only to save money, but to prevent overindulgence. I ate everything on that plate, now having consumed 1 1/2 meals. And I loved every second of it, including the belt loosening and feeling of total satiation that followed.