Pop-up restaurants have been all the rage for years. A famous (or not so famous) chef wants to try out a new concept without making a large investment, so finds an open space, sets up a makeshift kitchen, and makes a certain kind of cuisine for a week or so, putting out the word and hoping people show up. It turns out you can do that for stores, too (for example, a company called Storefront, lets you request and set one up through their website).

This was Disney's concept for the Marketplace Co-Op, located in Walt Disney World's Disney Springs Marketplace. Occupying the cavernous space that formerly housed Team Mickey, the idea was to have a revolving variety of temporary shops that would come and go, giving shoppers ever-changing shopping options. Does it live up to that promise? In truth, the line-up hasn't changed much over the years (though some shops have changed configuration a bit). What I did find on a recent visit, however, was an eclectic mix of merchandise that capitalizes on a trend that I love: taking Disney's beloved characters and properties, and doing something interesting with them.

Let's take a stroll around and see what we find.

As you enter the marketplace through the main entrance, the first shop you encounter on the left is D-Tech on Demand. This shop falls under the category of "go to a kiosk and make your selections." It mainly sells smartphone cases (for various models) and customized Magic Band wristbands. 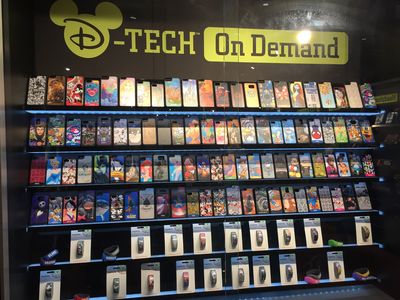 There's a large display on the back wall with dozens of examples of images you can pick for your phone case or magic band. When you're ready to order, you go up to a monitor and make your selections. Getting a smartphone case? Start by specifying the model of your smartphone, then pick an image from the hundreds offered from categories such as characters, movies, theme park attractions, and so on. Can't decide? Spin a wheel and see what comes up. You can also add your name. After you finalize your selections and pay, your phone case or Magic Band is ready about 20 minutes later.

Upon leaving D-Tech, the next store is the WonderGround Gallery, which I like to think of as the Art of Disney's hipper cousin. As the name suggests, it specializes in artwork that ranges from simple postcards that sell for a few dollars to original artwork that can go for thousands. What makes it hip is that in strolling through, you get the impression that Disney just let its artists go wild and create some crazy images using Disney properties. 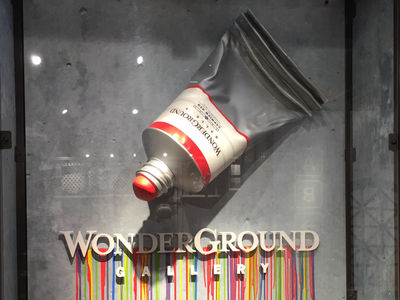 Even the WonderGround Gallery sign just drips with coolness. Photo by Gregg Jacobs.

Examples of this craziness abound, but one of my favorites is the line of artwork featuring a hipster Mickey Mouse. He has a pork pie hat and glasses and can usually be found gazing at his phone (think of him as Millennial Mickey). Minnie sometimes joins him and in some of the images, they're standing in front of classic Disney attractions such as "it's a small world." You can purchase these images in the form of giclees, prints, clothing, and even a large Vinylmation figure that sells for $60. 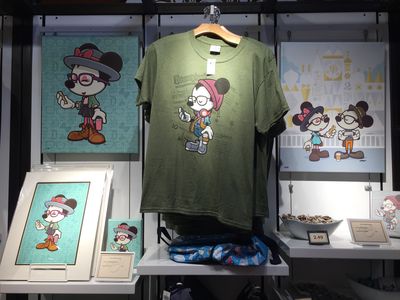 I love the hipster Mickey and Minnie line of artwork. Photo by Gregg Jacobs.

Other artwork seen recently has depicted Disney princesses in the 1970s "big eyes" style of artwork (made famous by Margaret Keane), and attraction posters altered in interesting ways, such as depicting characters from the rides as children. The gallery sells these images in many different forms, such as glasses (that remind me of those glasses Burger King and McDonald's used to sell years ago), pillows, and keychains. The shop is definitely worth a visit, even just to see the imaginations of these talented artists. 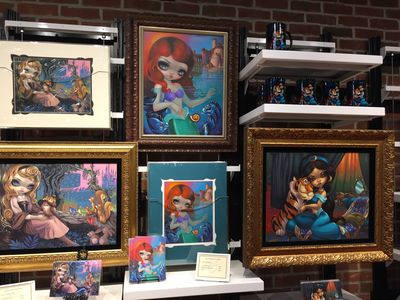 The artwork puts an interesting spin on Disney princesses. Photo by Gregg Jacobs.

Next up is Disney TAG, the marketplace's travel shop. This large shop (that has actually grown over time) has everything you can think of to make traveling easier. They sell luggage, neck pillows, luggage tags, toiletry bags ,and a number of other items. These are all a lot of fun, usually bearing stylized images of Disney characters and the parks. These are a great example of Disney being creative, showing fun images in unexpected places. 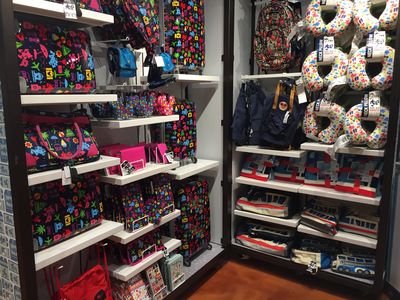 Disney TAG has a wide variety of travel-related goods. Photo by Gregg Jacobs.

The luggage can be a bit pricey ($200 for a largish suitcase), but there are plenty of more affordable items.

The next store is The Dress Shop on Cherry Tree Lane. Here, Disney has again found a way to update its characters and properties for a modern and adult audience, and create some interesting merchandise. As the shop's name suggests, the focus is on women's clothing. Disney excels here in the dresses it has created by invoking classic Disney characters such as Mary Poppins and Minnie Mouse in a way that's not necessarily so obvious. These are items that you can wear anywhere. 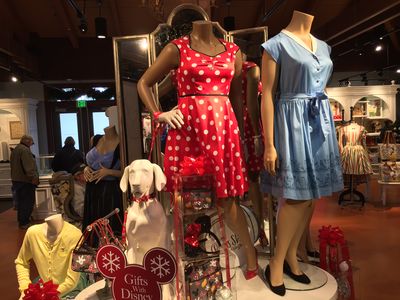 The Dress Shop on Cherry Tree Lane has some great clothing with nods to Disney history. Photo by Gregg Jacobs.

The dresses themselves are a bit expensive (most were $98), but for a Disney fan who wants something different, they are truly great finds.

We swing around the other side of the hall now and come to Disney Centerpiece. Disney describes this shop as a way to "bring the magic home through Disney-theme room furnishings, textiles and everyday ware." On that, it delivers. Like TAG and Cherry Tree Lane, Disney takes advantage of a golden opportunity here by taking its brand and beloved images and putting them on items that people can use everyday. 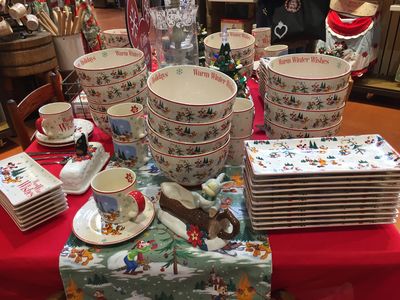 This store has dish sets, silverware, glassware ,and kitchen items, all with some kind of Disney touch. My last visit was during the holidays, so the usual line-up of merchandise was augmented with holiday plates and table runners. My kitchen has a Mickey spoon rest and Disney serving pieces. Yours can have any number of different items. My personal favorite is the 24-piece flatware set with a Mickey silhouette punched out of the base that sells for $65.

Twenty-Eight and Main is the last stop in the marketplace (see my deep dive article), but for any Disney fan, this is a place to check out. The offerings here go beyond your run-of-the mill Mickey Mouse WDW logo T-shirts (not that there's anything wrong with that).

A few people commented at the time that the article ran, that they heard the product line was going away. I'm happy to report that it's still alive and well ,and putting out new products all the time.

The merchandise tends to be of slightly higher quality, and also tends to be a bit more expensive. What makes the stuff special is the fun plays on park favorites. They have things like T-shirts with pictures of turkey legs and Mickey-shaped pretzels, and long-sleeve shirts with graphics to remind you of past attractions (the Nautilus is my my favorite—remember 20,000 Leagues Under the Sea?).

A personal recent purchase was a hoodie with the logo of the Rose and Crown Dining Room. We Disney fans know it's a dining staple at Epcot's World Showcase, but to the world at large, it's just a cool shirt that could be referencing a non-Disney eatery. Always be on the lookout for bargains, though: I wound up purchasing the shirt at Disney's Character Warehouse at the Orlando Premier Outlets for $19.95, about half what I would have paid at Twenty-Eight and Main. 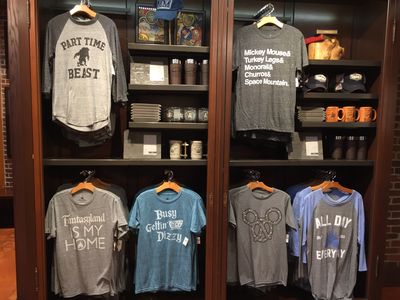 There's a ton of great merchandise that has a little fun with the parks at Twenty-Eight and Main. Photo by Gregg Jacobs.

The shop also has a wide variety of non-clothing items, including hats, backpacks, tumblers and briefcases, all with that fun sensibility.

What makes Co-Op Marketplace a place worth visiting is a sense of playfulness that really flows through the entire place. They take your typical Disney merchandise and put a fun spin on it. There are shops that: allow you to customize merchandise, put a hip or more adult spin on classic Disney images, put these images on usful day to day items, bring the Disney characters to unexpected places or bring a fun element to representations of the Disney parks.

While you may not see monthly changes in the shopping line-up as was likely the original intended, the Co-Op Marketplace is definitely worth a visit to find fun and unexpected items.