Welcome back to another Disney Top 5. We're nearing the end of our tour around Epcot's World Showcase. It's been a long haul covering nine of the eleven nations so far. Last time we were in France. This time we're crossing the bridge and heading into one of my favorite places anywhere on Disney property, the United Kingdom pavilion. On our last three trips to Walt Disney World we have been lucky enough to stay in the Crescent Lake resort area, twice in the Yacht Club and once at the Boardwalk Resort. One of the most tremendous benefits about staying in this area is being able to walk right into World Showcase through the International Gateway. I'll be headed back to the Yacht Club this summer to celebrate my 50th and I'm eagerly awaiting returning there for a multitude of reasons; one of the biggest is being able to stroll casually to and from World Showcase with ease.

We'll typically venture into Epcot first thing in the morning, before World Showcase opens for the day. The plan is to head into Future World and hit some of the attractions over there like Spaceship Earth, Nemo, or Soarin'. One of the joys of this early morning walk is entering the International Gateway, Epcot's "back door," turning left and heading through the United Kingdom pavilion before it's open. It feels like a special treat getting to see the UK and Canada before all the other guests that are arriving through Epcot's main entrance. Walking through an empty UK pavilion is a great way to start a magical day at Walt Disney World.

As soon as we pass through, I immediately can't wait to come back when it eventually opens at 11 o'clock. I love spending time in the UK. Despite no attractions, there's plenty to see and do for everyone in your group. Let's see what my front-runners are with my Top 5 things to see in Epcot's United Kingdom pavilion.

I've had several Advanced Dining Reservations for the Rose and Crown, and have always been faced with some conflict that arises and forces us to cancel. I can't really point to a specific reason why. Plans change once you get down there, but suffice it to say that we've never eaten there and it continues to bum me out. I'd love to score a table by the lagoon, especially around Illuminations time. If you're looking for a completely unique Epcot experience, forego the reservations and just stop into the pub for a pint. 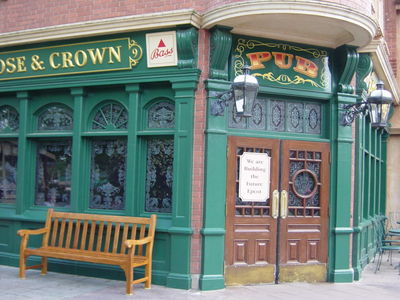 You can drink all over World Showcase, but you can't step up to an authentic looking British pub and have a beer anyplace else but here at the Rose and Crown. It's a classic looking pub with dark woods and leaded glass everywhere you look. I've happily enjoyed a Guinness or a Boddington's and a Scotch egg at the pub in the past.

I haven't been fortunate enough to be there when Carl the bartender is working, but I hear he's a Disney legend in his own right. It'd be hard to have a more authentic pub experience anywhere in Walt Disney World and given the significance of pub culture to the United Kingdom, this should be a must stop on your visit to this particular World Showcase country.

The UK pavilion is a great place to meet some awesome Disney characters. Alice typically holds court in the gardens next to the thatched cottage. Even if you're not up to waiting in line, it's awfully cool to walk by and spot her greeting little ones. My daughter always loved meeting Alice. She was typically one of the most fun characters to spend time with and always had a lot to say. It doesn't stop with Alice though. The UK is also a place to meet, who else but, the practically perfect Mary Poppins, also a big favorite of my daughter. But perhaps the best kept secret is meeting Winnie the Pooh and Tigger way in the rear of the pavilion inside the back of the Toy Soldier Shop. 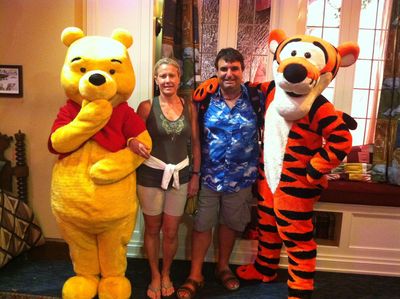 Pooh, Tigger and two of their best friends shown here in the UK pavilion at Epcot. Photo by Samantha Barry.

The last time we were wandering around the gardens back there, we poked our heads into the shop and saw Pooh and Tigger waving us in. There wasn't a solitary person on line to meet them! That doesn't seem to happen anywhere with any characters, none the less two "biggies" like Pooh and Tigger. So, give it a shot on your next trip and see if this is a consistent score. I have a feeling it just might be.

Not only can you meet Winnie the Pooh in this cozy shop in Epcot, you can find some classic British toys such as Thomas the Train, actual toy soldiers, Paddington toys and, of course, the aforementioned silly old bear. The interesting thing about this shop is, despite the name, they sell a lot more than just toys. 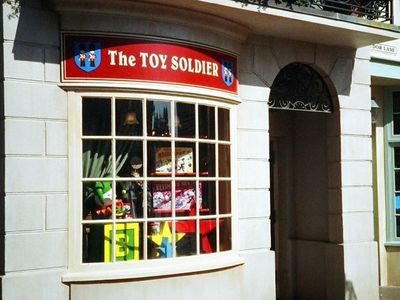 The Toy Soldier shop in the UK pavilion allows you to buy a Beatles t-shirt and a Winnie the Pooh plush all under one roof. ©Disney

This is the place for some British pop culture gifts as well. You can find Beatles, Rolling Stones, and The Who merchandise at the Toy Soldier. I found a great Yellow Submarine ornament there a few years back. They've also recently begun selling Doctor Who merchandise as well. It's a fun place to shop and I just about always walk out of there with something in a bag to bring home.

I've mentioned gardens on several of my lists throughout World Showcase, and the UK pavilion's flower beds rank pretty high on the list of beautiful spots in Walt Disney World. Whether it's the miniature hedge maze out by the gazebo or the stunning gardens out on the main promenade by the classic red phone booths, you're never too far away from something beautiful as you walk through the UK. 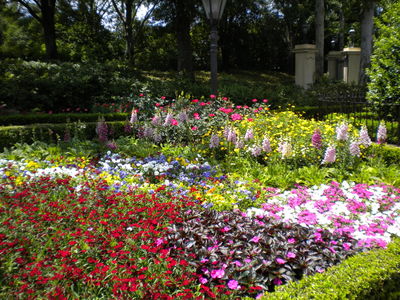 Stop and smell the flowers in the United Kingdom tea garden. Photo by Chris Barry.

My favorite spot in the pavilion and one of the most beautiful in all of World Showcase is the tea garden behind the thatched cottage. Cut through the Twinings Tea shop and walk out into the lush English gardens to have your breath taken away.

Each of Epcot's 11 pavilions feature authentic representations of their host nation's traditional architecture. The UK pavilion takes that notion to a higher level though, offering a virtual history of British architectural styles all coexisitng in one small village. Here you'll find impressive medieval castles, Victorian and Georgian style buildings, and a thatched cottage that pays tribute to William Shakespeare. It's a hodgepodge of styles and yet they all somehow cohesively exist together here in the UK pavilion. It's one of the most successful features of the pavilion's design. 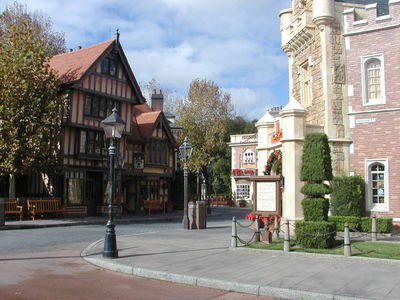 The streets of the United Kingdom showcase a wide array of British architecture. Photo by Alex Stroup.

The Imagineers wanted to pay tribute to the vast history of English architecture and yet make you feel like you were in a small village at the same time. It's an extremely impressive feat, and more than likely goes unnoticed by the average guest touring through the pavilion. Don't make that mistake on your next visit. It's a brilliant use of different architectural styles and makes the UK pavilion one of the most detailed and unique spots in Walt Disney World.

I get so excited walking from our room at the Yacht Club over to World Showcase. As you approach the International Gateway you might hear the sounds of The Beatles or The Stones as the band British Revolution plays out in the gazebo. As you make that turn into the UK, you catch the delectable scent of the fish and chips emanating from Yorkshire County Fish and Chips on the banks of World Showcase Lagoon. The amazing flower beds catch your eye and invite you to tour the streets and shops of the United Kingdom. As I said before it's typically the first spot we encounter when we arrive in World Showcase and we've developed such an affinity for the place over the years.

As it welcomes you in, the UK pavilion exudes the warmth and charm that I've experienced firsthand when I visited England myself and it's become such a true favorite of mine over the years. I can't wait to be back. Maybe this time, I'll keep that reservation at Rose and Crown and have some bangers and mash outside by the lagoon as I kick back with a cold pint and wait for Illuminations to start. That sounds positively delightful doesn't it?

As always, I'd love to read your thoughts on Epcot's UK pavilion. Click on the link below, let me hear what you have to say about my list and I'll see you next time as we finally wrap up our tour of World Showcase in Canada.