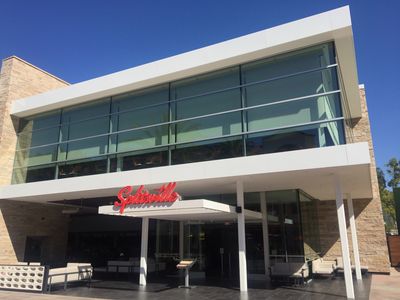 Splitsville Luxury Lanes is a fantastic addition to Downtown Disney, bringing a blast of mid-century Palm Springs architecture to the landscape. It is streamlined with lots of windows in front, and the main level boasts a great big patio. At night, the patio has a fire blazing and a beautifully-lit stage featuring live music. Guests know right away that this is not your old fashioned bowling alley. 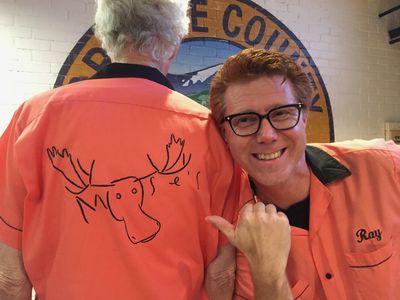 My mom and dad bowled in various leagues for years—dad on Monday nights and mom on Tuesday nights. One of the last leagues in which my dad bowled was sponsored by King's Drive Inn, which had a bit of a revival for a while in Lincoln, Nebraska but sadly hasn't survived. (Think of the Malt Shop in the show Happy Days). It is safe to say that bowling has always been in my family. I even bowled in a mother/son league in the summer with my mom. 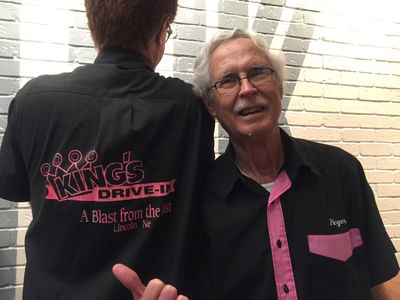 One of my dad's bowling teams was sponsored by King's Drive Inn in Lincoln, Nebraska. Photo by Amber Knight.

When I heard about the midnight bowling league being formed in San Francisco I jumped at the opportunity. I was working at Moose's Restaurant in the 1990s in Union Square (Park Tavern is the restaurant that now inhabits that space). Even though our team usually ranked last place by the end of the season, we always had a ball. One season we had too many people on the roster for one team so we created a second team. My parents were visiting San Francisco one week and we had two members no-show. My dad was more gregarious than my mom, so he bowled with the other guys and she bowled with me.

It had been years since my mom had bowled, and she didn't think she had it in her any more. I reminded her that we were in last place so it didn't matter. After her first game (in which she didn't even get to 100) she exclaimed, "Well, I know I can do better than that if I just concentrate." Lo and behold, she threw a strike on her first ball. And then another strike. Third time out: Strike. Now she was working a turkey. Strike! Strike! The crowds gathered and she had five strikes under her belt.

"I'm nervous now with everyone watching!" she mumbled to me. And then on the sixth frame... Splitsville! The famed 7-10 split. Of course they each got honorary shirts from Moose's Restaurant. 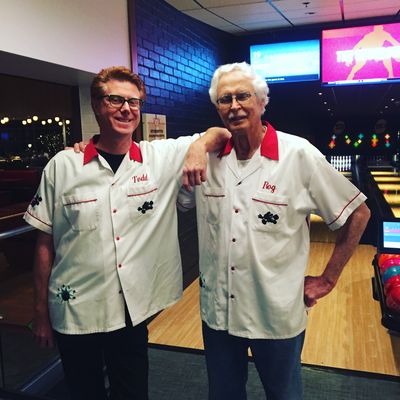 Wearing our Mickey Mouse bowling shirts, we are ready to hit the lanes. Photo by Amber Knight.

Dad and I donned our bowling shirts and headed to the new Splitsville Luxury Lanes in Downtown Disney, which is currently holding soft-opening previews. I honestly thought Strikesville would be more apropos, but one can't argue that Splitsville has a swell ring to it. Keep in mind this spot is officially called Splitsville Luxury Lanes, and the prices definitely reflect the luxury descriptor. Fortunately the normal bowling alley tropes: crowded lanes, uncomfortable benches and watered down drinks, are nowhere to be found here. Guests are greeted by a very friendly staff that explains the pricing: $24 per person ($19 before 4 p.m. Monday through Friday). For that you get one hour of bowling if you're a group of 1 or 2, with an extra 15 minutes added for groups of three or four, an extra half hour for five or six, and an extra 45 minutes for a group of seven or eight. Shoe rental is included in the price.

After checking in, a bowling host places your shoes in a basket before happily escorting you to your lane. There are 20 lanes total, subdivided into groups of two to four lanes so you don't get that overwhelming/crowded feeling often found in old fashioned bowling alleys. The lanes are decorated with lots of fun murals and great big booths that comfortably fit even large parties, so you definitely feel like you have your own private area. 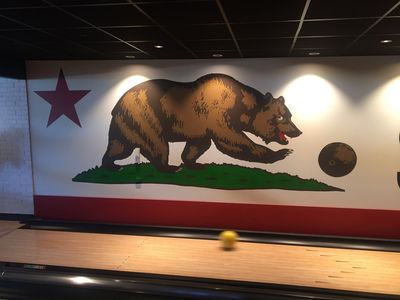 The lanes are decorated with some very cool murals. Photo by Todd Pickering.

There are lots of balls to choose from, with Mickey and Minnie adorning the lighter weight ones for the kids. Gutter protectors are available for your little ones as well. We bowled next to a family, and it appeared that Mom and Dad were enjoying food and adult beverages while the kids played. The children were fully entertained, which left the parents to have some quiet time and a nice sit down. 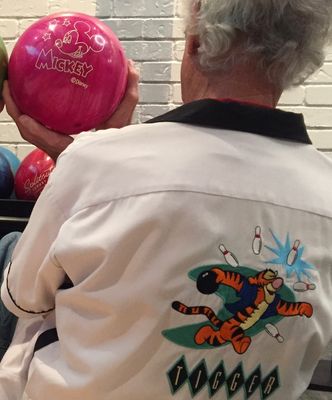 Unfortunately if you are sporting your Tigger bowling shirt you only have Mickey to choose from. Photo by Todd Pickering. 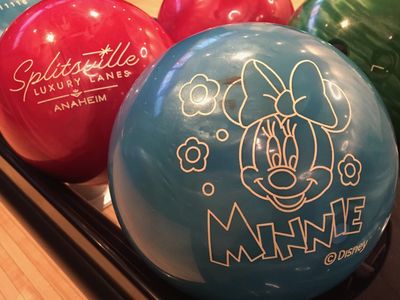 Lots of fun bowling balls to choose from including Minnie Mouse. Photo by Todd Pickering.

It is a bit tricky if your game is not finished, and if they are busy there may be someone waiting for you lane. We played two games easily in our allotted time, and then just leisurely played out our hour by trying new throws and goofing off so as not to get invested in the lane. There is a warning on the screen when your hour is about to expire so you don't have to keep looking at your watch. During this soft-opening, Splitsville is not yet taking reservations so only time will tell how crowded the lanes will be.

There are also waiters for every lane, and they are prompt and courteous. We decided to have a drink while we bowled and then once we were close to finishing, ordered some food to enjoy after our hour was up in the lounge. The Old Fashioned Elder is a spin on the classic old fashioned with the addition of St. Germain Elderflower liqueur. St. Germain was all the rage about five years ago, appearing in every restaurant and popping up in every drink even if it didn't add to the flavors. This didn't really add to the classic beverage at all, especially when they are using such a delicious top of the line bourbon like Michter's in the drink. The name is very clever but the flavors are just a miss. 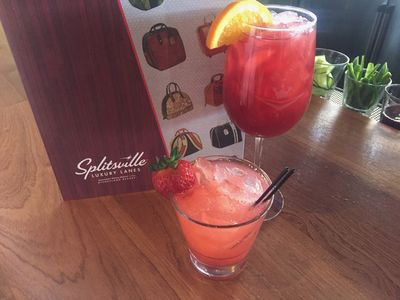 Fig & Berries and Royal Sangria from the bar at Splitsville. Photo by Todd Pickering.

The Royal Sangria is definitely a more summery style of Sangria using a Mexican wine called Pavo Real (a blend of mostly grenache and cabernet sauvignon) which was way too light and fruity and not earthy enough to hold up to the Blackberry brandy used in it. Also the fresh fruit flavors in a sangria where not apparent. By far the best drink we tried was the Fig & Berries, which consisted of Dobel Tequila, agave and lime juice, muddled strawberries, and fig jam. It was as sweet as the sangria, but the fresh ingredients of the jam and berries made it more juicy and lip-smacking. Even if you don't care for sweeter drinks this one hits the spot after a hard hour on the lanes.

My dad did try the Barrel & Sons pilsner which was $14 for a pint. Delicious and full-bodied but sort of made you hope for a $2 PBR at this point. My suggestion for a Luxury Lane experience is to enjoy a top of the line Tequila or Bourbon from the fully stocked bars or simply order your favorite mixed drink like a Jack Daniels and Coke or a Tanqueray and Tonic.

There seem to be many complaints about the prices of the food; it's easy to see why, with a $62.50 tab for a cocktail, a beer, a sushi roll, and french fries. The spicy tuna roll was delicious with bright red fish; a drizzle of sauce was just the right amount to enjoy each bite, giving enough zip to flavor but not too much to overpower. It's definitely a winner. 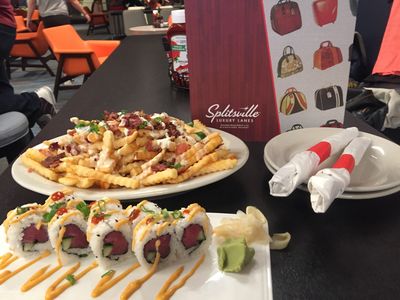 Spicy tuna roll and loaded fries from the kitchen at Splitsville. Photo by Todd Pickering.

The loaded fries weren't terribly loaded with bits of bacon, scallions, snd a sprinkle of queso blanco. At least the drizzle of ranch didn't make the fries soggy and sticky. In all fairness, it was a gigantic plate and would feed a large crowd. It seems like the plates are created for a big group and it would be hard for two people to finish that giant plate of fries. 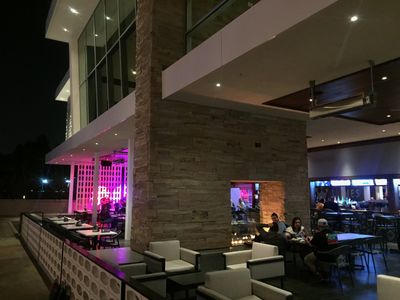 The stage and fireplace on the outdoor patio at Splitsville are near the indoor/outdoor bar. Photo by Todd Pickering.

While the prices are high, this is a fun experience if you know what you are in for. This isn't a regular bowling alley, but lanes at a resort. I don't see bowling here weekly. However if friends are in town looking for something fun to do, or want to grab a drink on the patio after a long day touring the parks on a chilly night to sit by the fire and listen to music, it is a great new touch to Downtown Disney.

One bowling footnote: My Dad and I got a turkey (well, I got two strikes and he got one.) My Mom ended up getting two more strikes in her game on the Moose's bowling team with a total well over 200 on her second game. Oh, and she picked up the seven pin at least on her Splitsville.