As I write this Top 5 installment, I'm just about a week away from a quick visit to Walt Disney World. I'll be chaperoning a high school trip for 3 nights and 3 days and despite the fact that I'll be responsible for the lives and safety of 45 high school students, I absolutely can't wait to be back.

This will be a short trip, fand we'll only get to hit two of the parks. My top two choices in a situation like that would always be the Magic Kingdom and Epcot. However, on this trip the awards ceremony for the competition we're attending down there will be held in Disney's Animal Kingdom in Festival of the Lion King theater. So, we'll spend a marathon first day in the Magic Kingdom and then spend a second nearly marathon day at Animal Kingdom. I'll miss Epcot in a huge way, but Animal Kingdom is a truly special place and I can't wait to be there again as well.

If you've been following my articles here on MousePlanet, and thank you so much for doing so, you'll know that I started a "best of the Walt Disney World parks" series quite some time ago. I hit every land in the Magic Kingdom and then went through all of Epcot, covering all sides of Future World and each nation in World Showcase. Now it's time to move on to the next park. That next park, in my mind, isn't Walt Disney World's third park, Disney's Hollywood Studios. It's the youngest of the four parks, Animal Kingdom.

Disney's Animal Kingdom is an extraordinary place bursting with life and beauty around every turn. I have always been a huge fan ever since first setting foot in the place back in 2003. I would always fight back when I heard it derided as a "half day park." I could never wrap myself around that notion. Were people walking around the same place that I was?

The whole "half day" notion stemmed from the thought that Animal Kingdom had fewer rides and more animal exhibits so therefore there wasn't enough to see and do. That way of thinking never made any sense to this fan. Like I'm always fond of saying about Walt Disney World, "When you slow down and appreciate all of the details, the place really comes alive." That sentiment is just as pertinent, if not more so, in Animal Kingdom. You'd be hard pressed to find a place on Disney property more detail intensive than Animal Kingdom. Pair that with some truly amazing animals to observe and one of the most outstanding collections of flower and plant life you will ever encounter and you have a true Walt Disney World treasure.

Obviously I've made my feelings clear about how fantastic Disney's Animal Kingdom is. Now let's start dissecting and examining it in order to come up with a series of lists counting down the best each area in the park has to offer. Throughout this series we'll cover Asia, Africa, Dinoland U.S.A, Pandora, and Rafiki's Planet Watch. That's a lot to cover, but let's start at the very beginning (a very good place to start) with Discovery Island.

The first thing you encounter once you bump your Magic Band and enter Animal Kingdom is The Oasis. It's a place that so many guests unfortunately breeze through as they're rushing to get on the Safari or running over to make their Fastpass window on Expedition Everest. That's a shame because The Oasis is beautiful, tranquil, and teeming with life. It's the perfect introduction to Animal Kingdom. Look for the wildlife. Cross the shaky bridge. Go through the cave. Take your time and marvel at the lush, dense foliage until you exit The Oasis and soak in one of Disney's best reveals as your gaze is instantly fixed over the bridge onto Discovery Island's awe-inspiring Tree of Life.

Discovery Island is a wonderful place to spend some quality time. It's got attractions, food, shopping, animals, and stunning natural beauty around every turn. Let's go in for a closer look with my Top 5 things to see on Animal Kingdom's Discovery Island.

If you have kids that are picky eaters and you've been to Animal Kingdom then there's no doubt that you've been into Pizzafari. As a lifelong New Yorker, I take exception to anything in Florida they try to pass off as pizza, but the food isn't the real attraction here. The walls, ceilings, and floors in& Pizzafari are an attraction all their own. 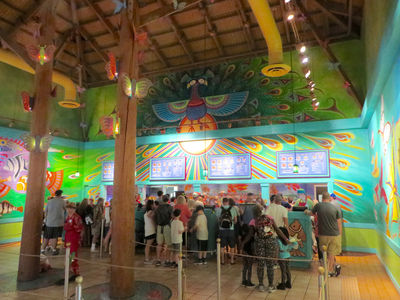 Just a small portion of the seemingly endless murals on the walls of Pizzafari at Disney's Animal Kingdom. Photo by Alan S. Dalinka.

This is a shining example of what they call the Disney difference. They could have made a fairly simple pizza restaurant here and done just fine. What the Imagineers did to this blank canvas is simply unbelievable. If you've steered away from Pizzafari because you simply didn't feel like eating pizza, you've missed out on some exquisite artwork. Words and photos don't do it justice. Stop in and take a long stroll around the place. You won't be the only ones staring at and appreciating the animals all over every surface of this place, I can guarantee you that.

I'm going to mention an animal in each of the lands of Animal Kingdom. It wouldn't feel right to leave them out. I can't make it through Discovery Island without spending some time with the otters. 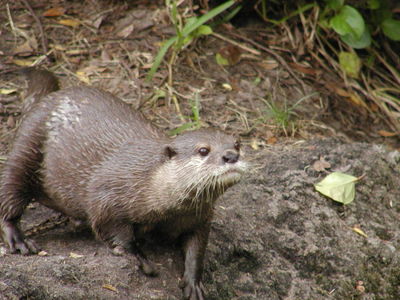 One of the Asian Small Clawed Otters on Discovery Island. Photo by Alex Stroup.

Can you blame me? They're adorable. They're fun to watch. They have a fantastic little habitat across from the aforementioned Pizzafari. About a year ago, the resident otters had triplets and apparently, they've been thoroughly entertaining guests who stick around long enough to watch them all frolic and play. I haven't seen them in person yet, but in about a week I will for sure! Here's a video of the otters posted by The Disney Parks Blog. Enjoy.

The Disney Parks Blog shared a video of the baby otters in March 2017. Video ©Disney.

Flame Tree has long been one of my favorite counter service restaurants on Disney property. Food wise, for me, it's all about the smoked pulled pork sandwich, the watermelon salad, and a cold refreshing Safari Amber on a hot day. But there's more to Flame Tree than just tasty barbecue. The seating pavilions out behind the restaurant are one of the best kept secrets in all of Walt Disney World. 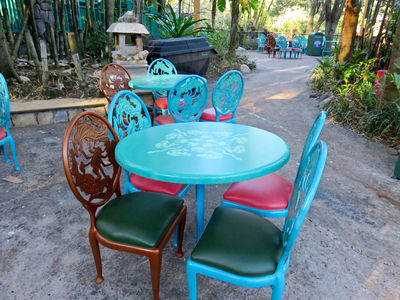 Some chairs in the seating areas of Flame Tree Barbecue nestled under the trees. Photo by Alan S. Dalinka.

Grab your food and walk out back and enjoy one of the best outdoor seating spots you'll find anywhere. There are views of Expedition Everest, ponds teeming with wildlife, amazing gardens, and intricately detailed pavilions to dine under. It's one of my Top 5 places to escape to in all of Walt Disney World.

Number two and number one on this list are intricately connected and it was difficult to rank one above the other. As far as Disney park icons go, I strongly feel that the Tree of Life is the most impressive of the lot. 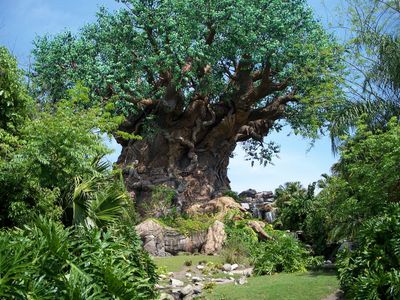 The Tree of Life serves as the centerpiece of Disney's Animal Kingdom. Photo by J. Jeff Kober.

Sure, Cinderella Castle is beautiful and Spaceship Earth is kind of awe-inspiring, but the Tree of Life is really a masterpiece of Imagineering. Consider that it has more than 8,000 branches and over 100,000 man made leaves. It would be amazing if it were just a giant man-made tree that looks so incredibly lifelike. It's the intricate animal carvings that make up the base and trunk of the tree that turn the Tree of Life into an amazing work of art. To me, it's probably the single most impressive thing that Disney's Imagineers have ever created.

The most wonderful thing about the Discovery Island Trails are that they allow you to get up close to the amazing Tree of Life and get a close look at the incredible animal carvings. 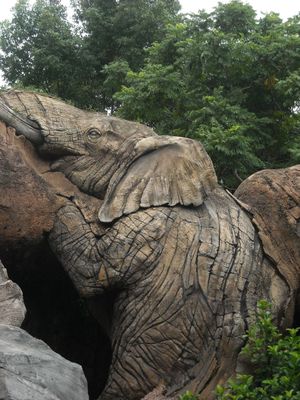 A standing elephant from the Tree of Life. Photo by Samantha Barry.

I did a Top 5 article on the animal carvings alone. You really get the chance to see and touch these amazing works of art. If that were the only thing you could do on these trails, I would still put them at the top spot on my list, but there's so much more to these hidden pathways. 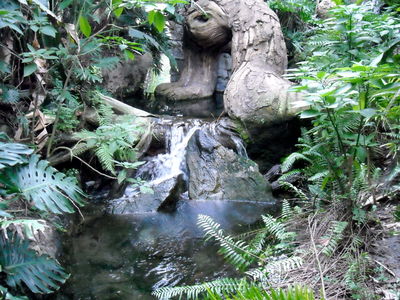 You can stumble upon a bucolic waterfall on the Discovery Island Trails. Photo by Chris Barry.

There are beautiful waterfalls, amazing views across the water to Africa and Asia, stunning gardens, more animals than you could possibly imagine, and deep, deep inside the roots of the tree you have an actual attraction, the 4-D film, It's Tough to be a Bug. Most people get to see some of the trails when they wander down towards that aforementioned film. But it's just unbelievable how many people have no idea about the rest of the trails and that's the real beauty of them, they're practically hidden.

The entrances to the trails aren't obvious, and I've watched as hundreds of guests go walking right by on their way to other parts of the park. They have no idea what they're missing. The Discovery Island Trails are symbolic of everything that Animal Kingdom is supposed to be. The Imagineers wanted you to slow down, take your time, stop to look at the natural beauty around you, and pause while you carefully try to find the animals living amongst the pathways. My favorites are the kangaroos, and you can't really see them well unless you venture into the Discovery Island Trails. Walk the trails and you will feel like you've left the hustle and bustle of the park behind you. Most times I've walked through them, it's been just me and my family—by ourselves. How often do you get to say that inside a Disney park?

Make sure that on your next visit to Discovery Island you set aside plenty of time to explore. It's the hub of Animal Kingdom. This is where the bulk of the shopping is and several places to eat or grab a snack, but it offers so much more. It's a wonderful introduction to an equally wonderful park, and it should be much more than merely a pass-through on your way to the other lands. Discovery Island is the heart and soul of Animal Kingdom and at the same time it contains so many of Disney's best kept secret spots.

When you visit Disney's Animal Kingdom do what you're supposed to do—explore and appreciate your surroundings. Make sure you start your exploration on the truly magnificent Discovery Island.

That's our first stop in Animal Kingdom. As always, I'd like to hear what you have to say. Click on the link below. Let me hear your thoughts about Animal Kingdom's Discovery Island and I'll see you next time with another Disney Top 5 when we head counterclockwise around the park to Dinoland U.S.A.