Saturday, March 3, dawned as the first cool day in a week of over 80°-plus temperatures in Orlando. The Third Gate Games crew gathered its game packets and set up by the entrance to Disney’s Animal Kingdom, for MouseAdventure: Tails, the eighth Florida-based MouseAdventure, presented with media sponsor MousePlanet. What a day it was!

With Chris Metzger leading the check-in process, team sign-in began at 9 a.m. and went swiftly. Beginning the kick-off speech by The Outpost Shop at 9:30, David Perry spoke loudly to the 220 people gathered to play the game, giving them a quick recap of basic game play, as well as the important basics like the location of MouseAdventure Central—Eight Spoon Cafe on Discovery Island (also handily number eight on the park map)—chosen for its proximity to the majority of the quests. David handed the reins over to Joe Stevano to remind everyone of the rules of the game, and Stephanie Wien followed with information on the all-important social media contest. 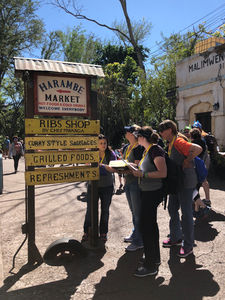 Harambe Market supplies a plethora of signs along with its delicious food. Photo by Stephanie Wien.

This being MouseAdventure Tails, the scatter setup had two options—Heads or Tails—on opposite parts of the walkway. Once all the teams were in line, the game packets were distributed and the Adventure began around 10:00 a.m.

As it turned out, conditions could not have been better. A light breeze all day seemed to refresh the park, and temperatures hovered in the mid- to low-70s, making for excellent Adventuring weather.

Recent Walt Disney World MouseAdventure events have taken place in parks and resorts on the same day. Due to the concerns about crowds in Animal Kingdom Lodge, MouseAdventure: Tails took place entirely within the perimeter of Disney’s Animal Kingdom Park. Teams were treated to an initial 10 quests along with the usual eye spy photos; with three additional quests becoming available for pickup after noon. This game saw the return of a PhotoPass-based team photo and the addition of 50 trivia questions.

Sticking with the theme, the eye spy photos focused on some of the many tails located around the park’s signs and landmarks. The trickiest of these was a small wooden horse outside of Expedition Everest, which amazingly was found by a handful of teams.

Quests in Africa revolved around the Harambe Market area, a new addition since the last MouseAdventure at the park, as well as the Gorilla Falls Trail. The Harambe Market is awash with signs, making it a prime location for a MouseAdventure quest. The aviary on the Gorilla Falls Trail is a busy place this time of year, when the yellow weaver birds are building their nests, but teams were able to stick to the trail and avoid distraction to complete the task at hand. 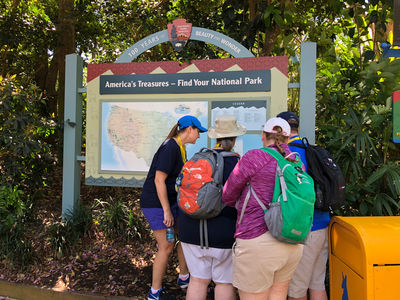 This team discovers an elusive data point in Rafiki's Planet Watch on a map of National Parks of the United States. Photo by Stephanie Wien.

Rafiki’s Planet Watch hosted two quests, focusing on its environmental and animal care displays. Have you ever listened to the song of the rain forest audio presentation there? You should, because then you will understand. 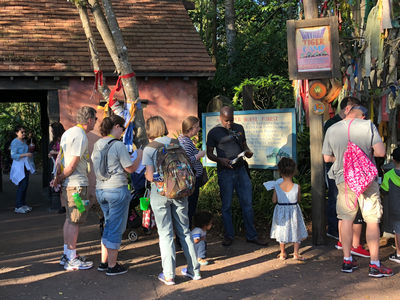 Team Plutonium discovers the final answer to a quest in Asia. Photo by Stephanie Wien.

Asia challenged teams to find all its T—on signs that is. There happen to be a lot of new signs along the Rivers of Light area, which provided additional data for the quest writers. A second quest along the Maharajah Jungle Trek gave teams an appreciation for the artwork on the walls along the way, having them search for two-dimensional tigers in lieu of the live tigers in the enclosures. Some teams did take a moment to peek at the two new adorable cubs as they passed through the area. 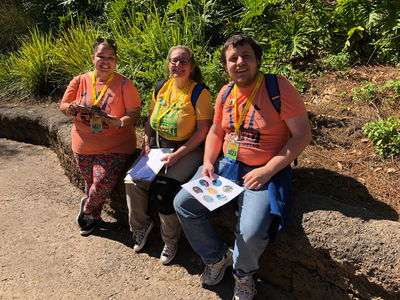 The third Asia quest was one of the most challenging of the game, sending teams looking closely at the businesses of Anandapur, many of which are marked with Ministry of Economic Development signs that contain a date and other numbers—an object ripe for a MouseAdventure quest if there ever was one. To make it even better, some of the plaques are tucked up under the eaves, making them tricky to find and practically invisible to the casual passerby. 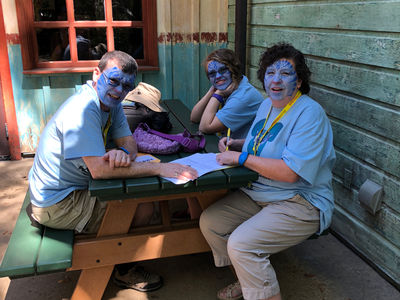 Seating and shade is often hard to find in Dinoland, USA. Photo by Stephanie Wien. 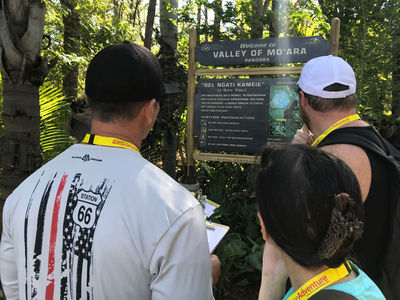 I see you, final answer to a quest. Photo by Joe Stevano.

Teams also searched high and low in Dinoland to complete a word search with a hidden message; explored the trails of Discovery Island to reveal the secrets hidden in the animal descriptions; traveled to Pandora to examine the legacy of war and the unique light fixtures; and discovered the predator and prey relationships on display at Flame Tree Barbecue.

The Oasis hosted a two-part quest that is only recently possible at Walt Disney World due to its switch to keypad-combination lockers. Teams used the animal signage in the area to reveal an encoded message that, along with the provided four-digit number and carefully worded instruction, directed them to open a nearby locker where jigsaw puzzles awaited them. Once assembled, the puzzle’s reverse side was stamped with the final question to be answered.

When the game wrapped up at 6:00 p.m., the Third Gate Games crew headed back to their secret grading lair, only to reappear at Seabreeze Point on Disney’s BoardWalk property for results at 10:00 p.m. 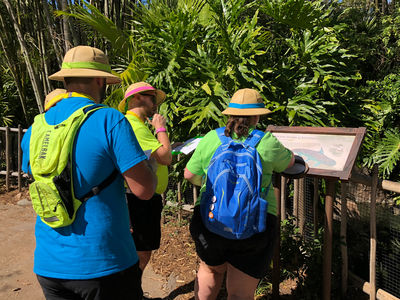 The signs around Discovery Island provide a wealth of information. Photo by Stephanie Wien.

Full results for all teams are available on the event results page. Scores are out of a total possible points of 654. A full list of quests with answers will be posted on the MouseAdventure website soon. 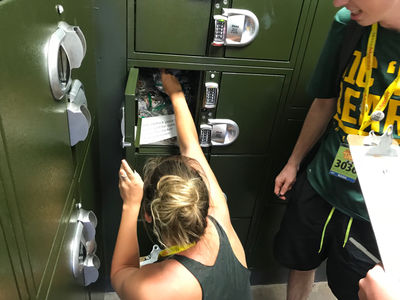 Team We Want the Red Head retrieves a jigsaw puzzle from the locker. Photo by David Perry.

The best new team (not otherwise placing) was We Want the Red Head. With 568 points, they placed fifth overall.

The top three teams were: