Disney Outside of Disneyland (Part One of a Series)

There are many that make a trip to Disneyland part of a one or two week Southern California vacation. Sometimes they even combine a trip to San Francisco and/or Las Vegas. If you and your family are Disneyphiles looking for other Disney/Pixar/Walt Disney things to do and see in Southern California, this is going to be an ongoing series here at MousePlanet covering some other Disney-centric attractions in California. 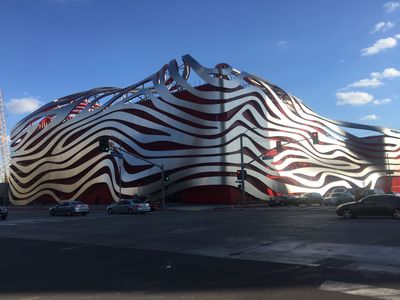 The ultra-sleek Petersen Automotive Museum is part of Museum Row, and is located on Wilshire Boulevard at Fairfax. Photo by Todd Pickering.

Whether you are a pilgrim coming to see everything Walt touched or looking for new points of interest on an annual Southern Californian trip, The Petersen Automotive Museum should not be missed. Southern California is definitely one of the car capitals of America; with Route 66 ending in Santa Monica there isn't a more apropos city for an Automotive Museum. Even if cars aren't your thing there is so much history and diverse collections that a trip to The Petersen is well worth it for anyone.

The Museum recommends that you start on the third floor and work your way down. The third floor is all about history with a lot of early automobiles dating as far back as the late 19th century, many prototypes and small productions autos, and the very popular Cars of Film and Television collection. In that latter exhibit you may find cars such as the Batmobile from Tim Burton's Batman series, the Thunderbird from Thelma and Louise, and Magnum P.I.'s Ferrari.

Disney and Marvel fans can see Herbie the Love Bug or Tony Stark's car from the first two Iron Man films. The color scheme of Tony's car inspires his Iron Man suit color when he tells J.A.R.V.I.S to paint it "hot rod red." The collection is vast and always rotating so be warned that cars come and go off the floor. 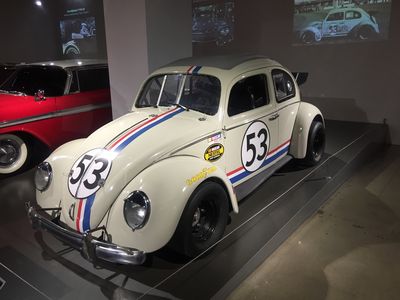 Whether you a kid of the 70s or 90s seeing Herbie the Love Bug is a thrill. Photo by Todd Pickering. 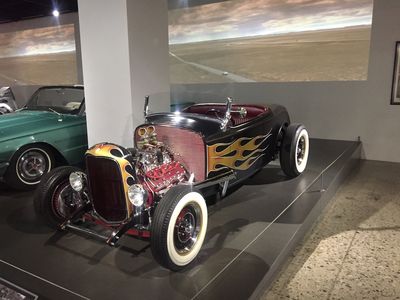 The second floor is the industry floor, and is devoted to the design experience and racing. There is the Forza Motorsport Racing Experience, which is a video game style car simulator where you sit inside and race. Children may not be able to reach the pedals, but can play a video game version of this. This floor also boasts the Sidewalk Speedster exhibit, which explores our fascination with little cars. Scaled down versions for soap box racing, kids motorized cars and for the Disney enthusiasts a Disneyland Autopia car from 1968. There is also a short film which has great footage of the original opening day ride where the cars where surrounded by one giant bumper, were not on a track and you could even pass other drivers. Those were the days. 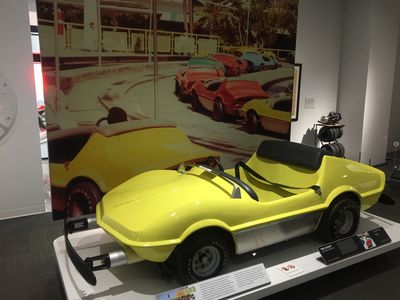 Any Disney fan would be tickled to see a 1968 Autopia car. Photo by Todd Pickering.

There are currently two exhibits on the main level which focuses on Artistry. The High Art of Riding Low through July of 2018 is an amazing exhibit of low rider and hot rods most popular with the Chicano community. Lots of bright colors and art work and sparkles makes this a great exhibit for kids. Much more adult is the other exhibit The Porsche Effect that opened in February of 2018 and runs through January of 2019. If you are a Porsche enthusiast it shouldn't be missed. The Porsche company is connected to Disney/Pixar because Lightning McQueen's paramour is Sally who happens to be a Porsche Carrera. She is on loan, and can be seen on the second floor right next to Lightning McQueen himself.

All sparkling and glistening and shiny, the low rider cars are fun for everyone. Photo by Todd Pickering. 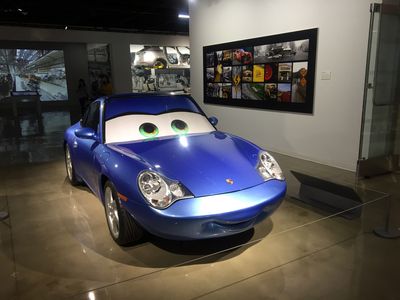 The Porsche Company has designed a replica of the character Sally that is currently on display next to Lightning McQueen. Photo by Todd Pickering. 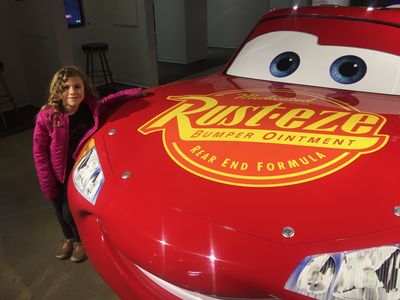 Zaida gets her picture with Lightning McQueen. Photo by Todd Pickering.

Lightning McQueen and Sally (for a limited time) are in front of the Cars Mechanical Institute, which is a fantastic addition for the museum's younger (and young at heart) patrons located on the second level. I brought seven-year-old Zaida along with me, and this was definitely her favorite part of the excursion. She enjoyed taking pictures with Sally and Lightning and the art work outside the institute showing off sketches and research for the Disney/Pixar film Cars 3. 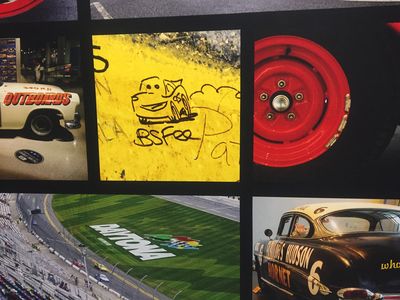 Near Lightning McQueen are great photos, concept art, and landscapes from the Pixar film "Cars." Photo by Todd Pickering. 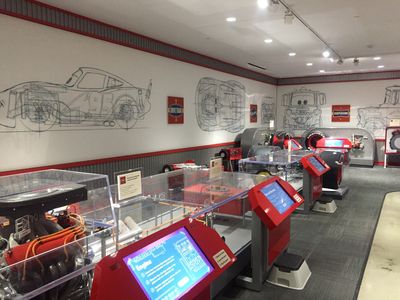 The Cars Mechanical Institute has a lot of fun hands on exhibits. Photo by Todd Pickering

Inside the exhibit, things get more hands on to teach kids how a car works. Museum educator John Ayala was absolutely wonderful taking Zaida through the steps of the mechanics; the displays have lots of buttons to press that make things light up, gears turn, and pistons move. Learning how the mechanics work is fun, but the highlight of the day was The CarsPad experience.

The kids get an iPad that they use to take a picture at eight different stations. When they take a picture, Mater appears; with the help of his friends like Flo, Luigi, and Ramone you get to build and understand a car. Fillmore even shows you how to make different sorts of fuels to make your newly designed race car go. The whole interactive game takes about 20 to 40 minutes. It's just the right length with all sorts of fun things, like choosing wheels and side panels. You even get to paint your car. Zaida decided to change colors and did this twice.

The game was designed by Disney/Pixar and features all of the original actors' voices from the films (I couldn't quite tell if George Carlin was still alive to voice Fillmore). Adults are allowed to play and children under 12 must have an adult check out the iPad for them. Upon returning the CarsPad to the Cars Mechanical Institute Zaida enjoyed tracing one of the cars to take home and color. 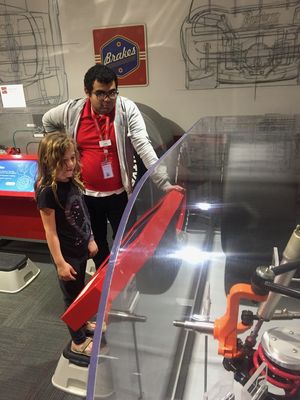 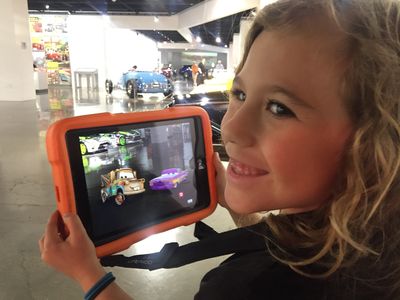 Zaida enjoys the interactive game on the "Cars"Pad. Photo by Todd Pickering. 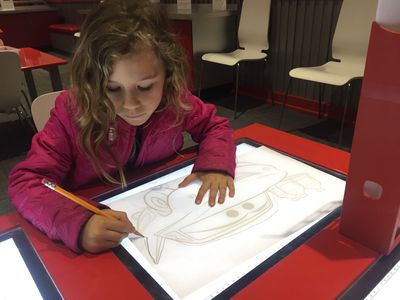 The other two big highlights for Zaida outside of the Cars Mechanical Institute were sitting in the Model T that they have reserved for a photo op, and getting our pictures taken with the DeLorean from the film Back to the Future (which she had just seen). Upon this visit I found out that Herbie had been rotated out of the Cars of Film and Television exhibit, but is now part of the permanent collection. Zaida was proud to recognize the Autopia car on the second floor, but the history seemed lost on her.

My take away with kids is that a trip to Disneyland (including riding Autopia) along with watching films like Herbie the Love Bug and Batman before visiting the museum makes a huge difference in their appreciation of seeing some classic cars. Even if you are not a car enthusiast, there is something for everyone at The Petersen Automotive Museum and one trip is well worth it. If you are a car enthusiast you will never get tired. The collection is vast and ever rotating; this will be the coupe de grace of your Southern California visit. (You see what I did there? I couldn't resist.) 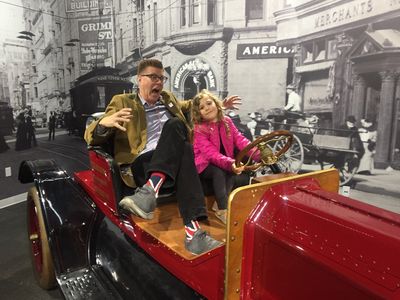 Zaida drives while the author looks on in horror. Photo by Roger Pickering.

The museum is located at 6060 Wilshire Boulevard, near the Los Angeles County Museum of Art (LACMA) and the La Brea Tar Pits. It is very popular and the garage can fill up so, just like Disneyland, going early is always a plus. The museum is open every day from 10 a.m. to 6 p.m.; to find out more, check out their website.