There's such a palpable sense of exhaustion running through me right now. I just returned from a whirlwind Walt Disney World trip this past weekend and I'm still in recovery mode. It's been hard to pry the smile off of my face but I am wiped, as I frequently am upon returning from the most magical place on Earth. This was a completely different trip than any of the ones I have taken in the past. This time around, I was chaperoning 45 high school kids as they competed in a Festival Disney choral competition. What truly made it memorable was not just the fact that they came in second place out of 23 schools nationwide, but also because I was able to impart so much of my Walt Disney World knowledge on a whole new group of people.

A big percentage of these kids had never been there before. Others had only been there as little kids and this was their first time returning as "almost adults." I've had many, many incredible Disney experiences in my life but corralling these kids on the left side of the Magic Kingdom's Town Square and then moving them as a group onto Main Street U.S.A. for their first glimpse of Cinderella Castle was a moment I will treasure forever. The collective gasp of 45 kids as they laid eyes on the majestic castle was truly inspiring and made it all worthwhile.

After an arrival night spent dining at Disney Springs, our second day was a full, marathon day in the Magic Kingdom. On our third day, after performing in the charming Saratoga Springs Performance Hall, a place I've certainly never been inside before and I'm sure most of you haven't either, we got to spend an almost as equally long day in Animal Kingdom.

The competition awards night was actually going to be held in the Lion King Theater in Africa, so Animal Kingdom was the logical choice for our second and final park day and boy, was I glad that was the choice. I adore Animal Kingdom and always have, even back when people seemed to write off this amazing place as a "half day park." After a good long day in Animal Kingdom, I can truly say that this park is rising to the occasion and has become a destination all its own. We arrived around 11:30 a.m. and didn't leave until after 9:30 p.m.; I'm pretty sure we all could have kept going.

It was quite fitting therefore, that I've just begun a new series documenting the best of Disney's Animal Kingdom here on MousePlanet. Animal Kingdom is fresh in my mind as I write this. We started off this series last time on Discovery Island. I've settled on a counter-clockwise path for Animal Kingdom, saving the mind-blowing Pandora for last. That means our next stop is DinoLand U.S.A. It's difficult to leave Discovery Island behind, but it's time to enter a whole other Disney realm, and a spot like no other in all of Animal Kingdom. DinoLand has its fans and its detractors, but there's a little something there for everyone, so let's take a closer look with my Top 5 things to see in Animal Kingdom's DinoLand U.S.A.

I put this major attraction low on my list for a few reasons. The first is that it's kind of a stretch to include this in DinoLand proper. It's not quite in DinoLand and it's not quite in Asia; it's just sort of lumped into DinoLand by proximity. The second is there's just something I don't really like about being able to see the puppeteers. Maybe it's the Muppet purist in me, but I can't seem to get past it. 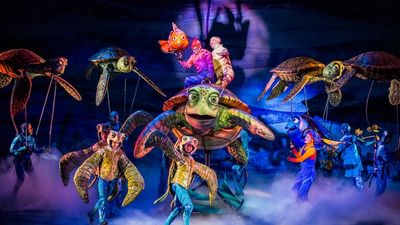 The cast of "Finding Nemo: The Musical" includes puppeteers and dancers. Photo ©Disney.

Don't get me wrong, Finding Nemo is a wonderful show with beautifully detailed puppets and some very special moments. Once you see the show, just try to get "In The Big Blue World" out of your head. This song ranks up there with "it's a small world" and "There's a Great Big Beautiful Tomorrow" on the infectious scale. It should definitely be seen when you're visiting Animal Kingdom. Your kids will love it and you probably will too.

I gained a new appreciation for the show when I sat though it with a fellow MousePlaneteer for the first time. Finding Nemo is, at its heart, a story about a father and son. If you recall from the film, Nemo has a bad fin and this causes his father Marlin to excessively worry about him. I sat with a dad whose son also has a "bad fin" of sorts, and began to see the show in a whole new light. You don't need that experience to enjoy the show, but it added context for me.

This shop is one of my favorites in Walt Disney World, and it's not necessarily for the merchandise. You can find the usual plethora of Disney stuff here, but aside from the Dinosaur themed toys, there's nothing here you can't get anywhere else. However, don't go here to shop. Go here to look around. Chester and Hester's is literally packed to the rafters with fun stuff to look at. 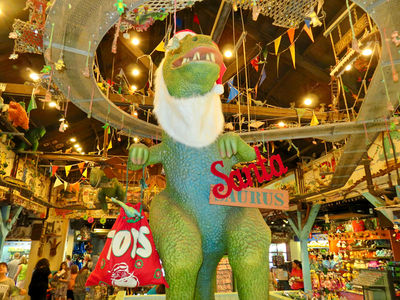 Chester and Hester's Dinosaur Treasures shop dressed for the Holidays is jam-packed with items. Photo by Alan S. Dalinka.

The whole theme of the adjacent Dino-Rama is played out here to the max. Chester and Hester's Dinosaur Treasures is supposed to be reminiscent of a tacky roadside gift shop one might find on a road trip on the highways and byways of America. The place is full of puns and great signs and it's a masterpiece of propping and theming. Check it out and make sure you look up.

This is DinoLand's main eatery and much like the aforementioned shop, it's another masterpiece of theming. There is a backstory to this area of DinoLand. The story goes that the paleontology graduate students that study at the Dino Institute called this building home and decided to convert it into a restaurant. 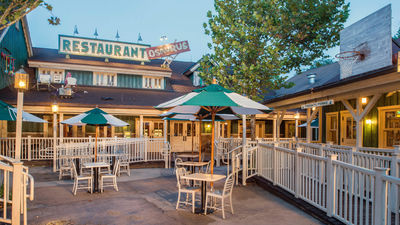 The main entrance to Restaurantosaurus in DinoLand U.S.A. Photo ©Disney.

The result is an amazing collection of props, puns, and stuff all crammed into a hodgepodge of architecture. There's even an actual Airstream trailer attached to the building that you can dine in. The food is typical theme park fare, i.e. burgers, fries, and chicken fingers. Last time I was there I did have the shrimp po boy, which was a nice addition. Once again, it's not the food that you go to Restaurantosaurus for, it's the Disney theming at its best. Go before a meal rush and just look around. It's well worth your time.

If you have young kids or had young kids and have spent anytime in Animal Kingdom, it's a fairly safe bet that you spent a considerable amount of time in the Boneyard. 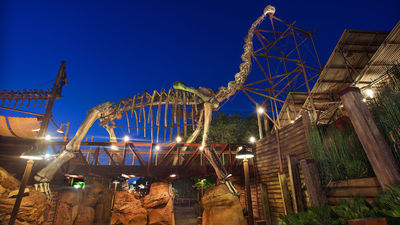 This is a paradise for the little ones. You'll be hard pressed to catch up to them as they run, climb, slide, dig, and do just what kids are supposed to do. No need to fret, the entire area is fenced in and there's only one way in or out so they may outrun you but they won't run out on you! My kids especially enjoyed crossing over the dinosaur bridge and venturing into the dig site. Here they loved digging through the "sand" (actually tiny pellet size rocks which don't stick to you or your clothing) and looking for fossils. It's a ton of fun for you and your kids. Keep in mind though that in the summer months, it can get pretty darn hot in there, so bring in some cold water.

The main attraction here in DinoLand is the ride that lives deep inside the Dino Institute. Dinosaur is one of Disney's best and most intense attractions featuring one of the most complex ride vehicles ever designed, some amazing effects, and some truly awesome animatronic dinosaurs. 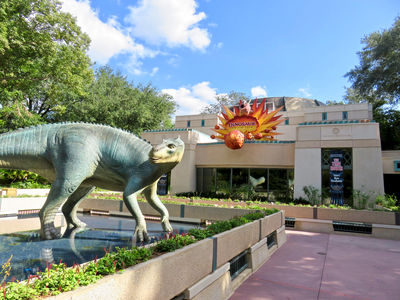 You will get jerked around. You will scream and laugh and get startled by the massive Carnotaurus. Dinosaur is sort of hidden in a corner of the land, and can sometimes be experienced without too much of a wait, especially now that Expedition Everest and Pandora swallow up the crowds. Don't miss it. It's in a class all its own.

Dinoland U.S.A. seems to divide the Disney faithful. I've heard many Disney fans complain about the mere existence of the land. They say it doesn't fit with the rest of the park. They say it's tacky, gaudy, and cheap looking. I agree to a certain extent when it comes to Dino-Rama. Aside from Triceratop Spin—think Dumbo but with dinosaurs instead of elephants—I've spent very little time in Dino-Rama. Primeval Whirl is pretty rough, and I have no interest in the carnival games here. Dino-Rama aside though, the rest of DinoLand is pretty impressive.

The things I've mentioned on this list are all well worth your time, and are top notch Walt Disney World attractions. There's only one actual live animal to see in DinoLand, the American Crocodile which sort of fits into the land given it's prehistoric look, so it falls a little short in the nature department. If you're a horticulture fan, the plants along the Cretaceous Trail are worth checking out as they are species that have survived on Earth for millions of years and would look completely at home in the Cretaceous period.

All in all, I like DinoLand U.S.A. quite a bit. It's completely unique. It's well themed. It has one of my favorite rides anywhere in Dinosaur. It's got one of the most immersive playgrounds you're likely to find. I would wholeheartedly disagree with its many detractors. This writer's advice? Don't listen to the naysayers out there and make sure to carve out some time for DinoLand U.S.A. on your next trip to Walt Disney World.

That's all for DinoLand. As always, I'd like to hear your thoughts. Click on the link below, let me hear what you have to say about DinoLand U.S.A., and I'll see you next time with another Disney Top 5 as we make our way towards Animal Kingdom's Asia.