When Star Wars premiered in 1977, I think it's safe to say that few people could have ever imagined how far it would go and how much of a cultural impact it would eventually have, but oh, has it ever. Of course, many different factors have occurred since 1977 that have turned the franchise into a global phenomenon, but you can hardly go anywhere these days without being inundated by anything and everything Star Wars. The franchise has made its way into just about everything: movies, television shows, books, merchandise, theme parks, you name it…there is almost certainly a Star Wars version to go along with it.

One of the additional aspects of Star Wars mania are the comic books, which have maintained a long run of existence since 1977 when the first book released along with the first film. Since 1977, there has almost always been a Star Wars comic book on the market for fans to enjoy and today there are many different titles, for fans of all ages.

Though the license for Star Wars comics has bounced around a few different publishers, the main license holder is now, of course, at Marvel—where it all began—which, like Star Wars, is also owned by Disney. A small subsequent line of all-ages comics also exists from IDW Publishing. While there are a lot of Star Wars titles on the market, I don't feel like there's too many where it becomes overwhelming, and they definitely all have something to add to the narrative of the larger universe and each individual title does offer something different so fans of all degrees and ages will find something to enjoy.

The Star Wars main title at Marvel has been going strong ever since Marvel took back the Star Wars comics license. The creative teams have switched throughout its run thus far, but the content remains solid and the title strong. This is actually my personal favorite of the many different books. Focusing mainly on our big three—Luke, Leia, and Han—this book fills in the gaps left by what we didn't see in the movies and showcases the adventures that these three were inevitably happening when "the cameras weren't rolling," if you will. It offers fans simply another chance to live in and experience the universe, even when the movies end. I imagine that as long as Star Wars comics exist, this main title will endure, although it will be interesting to see if the narrative ever shifts from Luke, Leia, and Han to more modern characters. I don't see it happening any time soon, but you never know! 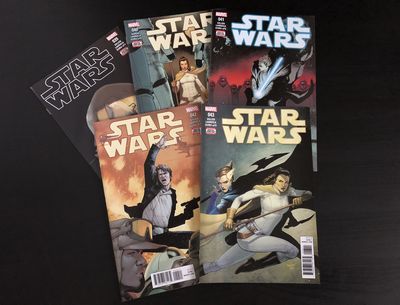 Speaking of modern characters, one of the other ongoing titles at Marvel centers on everyone's favorite new Resistance pilot, Poe Dameron. Up until just very recently, the Poe Dameron comics told the stories of Poe and his squadron's adventures within the Resistance before the events of The Force Awakens. This was a really great way of filling in the holes of the backstory of one of the newer films' leading characters. It provided more context and a deeper character history, which goes a long way in developing more of an attachment to this character. The comics now are starting to catch up to the period of time the films take place, so the longevity of this series remains to be seen. However, this series features everyone's favorite General, Leia Organa, quite often, which is more than enough to keep me coming back for more. 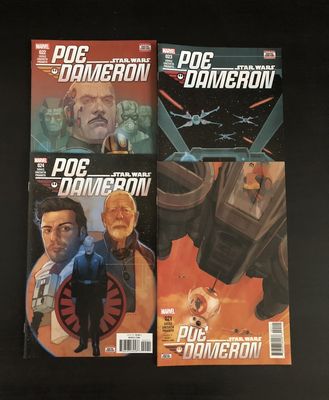 A new character, original to the comics, is Doctor Aphra. Aphra is a human archaeologist who first appeared after being recruited by Darth Vader to complete some "bounty hunter-esque" missions for him. Things went bad between the two of them however and she now lives in hiding and on the run from Vader, while trying to continue to live her life, support herself, and have a bit of an adventure. Aphra first appeared as a supporting character in the Darth Vader title comic, but then gained so much popularity among the fans that Marvel created a spinoff solo title for her character. Having read her arc in the Vader comics, I was interested in her solo title…but not convinced. However, I gave her title a try and long story short, I'm still reading it to this day! I was pleasantly surprised to find that I was really quite interested in her stories, they added depth to a side of the galaxy never quite explored before, the world of the sciences and the life of someone not on either side of the galactic conflict, just trying to survive. 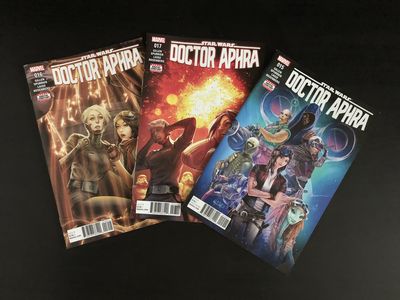 Of course, nothing Star Wars-related would be complete without Darth Vader. One of the most iconic characters in the history of storytelling absolutely deserves his own comics series, and his solo title has always been one of the best Marvel has to offer. Darth Vader's life once he put on the mask has always been a bit of a mystery. Sure the films showed what he was up to once Luke got involved, but what about all of the years before that? What happened then? The Darth Vader ongoing title exists to answer those very questions. This book shows Vader's life as a warrior of the Galactic Empire before the events of the film. It's fun to see what the Sith Lord was up to and how he grew into the person we saw in the films much later. This is and probably always will be a very solid and enjoyable series. 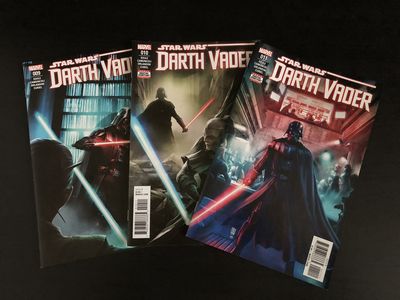 One of the newer titles is from IDW Publishing, which has nothing to do with Marvel, but was awarded a license for some additional Star Wars comics aside from the main line. The Star Wars: Adventures line is more "all-ages" than the others, with a more "cartoon-focused" art style and storylines that stay fun and light. That's not to say these comics won't appeal to adults, on the contrary, I think these comics are really fun for fans of all ages. The other fun thing about these comics is that they bounce around from character to character, it's not all focused on one. I think that this is a great way to keep the stories fresh and exciting every time you pick up a new issue. 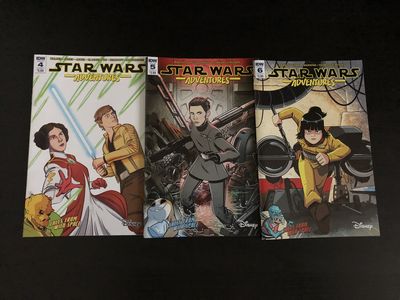 In addition to the ongoing titles, many a miniseries has come and gone in the Star Wars comics library since Marvel took over. Some of these series have included stories about characters such as Kanan Jarrus, Captain Phasma, Princess Leia, Han Solo, Darth Maul, and Chewbacca, among others. All of these miniseries titles have had one thing in common: their purpose was to fill in the gaps in storytelling about these characters that the films (or television series) simply do not have the time to accomplish. Want to know more about when Kanan was a Jedi? There's a comic for that. Want to know how Captain Phasma got out of the trash compactor, and what she did immediately after? There's a comic for that! Every character has a rich history and a deep backstory that a two-hour movie trying to showcase a multitude of characters simply can't show. That's why these comics have been great additions to the overarching Star Wars universe; they help answer questions and keep fans engaged, and they're very successful in doing so.

While all of the ongoing titles I discussed above are still running strong, and are great titles to get invested in, there are always new Star Wars comics on the horizon. There are three upcoming titles that have been announced (one already started just recently) that I'm most excited for, and that's: Thrawn, Lando: Double or Nothing, and The Last Jedi Adaptation.

The Last Jedi Adaptation is pretty self-explanatory, with it simply being a comic version of the events of the film. While it may seem redundant, it's always fun to see the cinematic story retold in a different format, and I always enjoy the adaptation comics…plus, they make for great collector's pieces!

Lando: Double or Nothing is an upcoming miniseries focused on the version of Lando Calrissian we are about to see in a couple months in Solo. I cannot wait to see this film's version of Lando and when I heard there was a comic coming out featuring him, as well, I was super excited. This is clearly going to be a really fun story, and will almost certainly add a lot of context once the film is released.

Finally, the series that has just recently gotten underway is Thrawn, the epitome of a fan favorite character that forced its way into the canon. Grand Admiral Thrawn, a military commander serving the Galactic Empire, first appeared in a Star Wars novel years ago and since then has popped up in other novels, video games, the animated series Star Wars Rebels, and now his own comic book. Thrawn is a really exciting and kind of spooky character, so it's been a lot fun exploring his past and his characterization, and who knows…he may just pop up in a film someday. 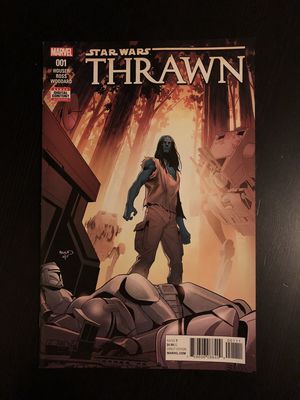 I'm, personally, a big comics fan. I'm also a big Star Wars fan, like I imagine a lot of people reading are. So having a wide range of Star Wars comics to enjoy every week is pretty incredible. There's always a new story to look forward to and it keeps the galaxy front and center in my mind. I don't find these comics to be absolutely necessary for any fan to truly understand what's happening in the Star Wars universe, but they certainly help fill in gaps and provide more answers for mega-fans who want more after they leave the theatre. If you don't already pick up any of these comics, I highly recommend you get one and start reading.