My Disney Top 5 - Things to See in Animal Kingdom's Asia

It's been just about a month since I was strolling happily through Animal Kingdom on my last trip chaperoning a group of 45 high school students from my school's choral department. I spent a great deal of time both before and during the trip making sure that these kids knew that there was more to Walt Disney World than rides and characters. Before we set forth into Animal Kingdom, I gathered them just inside the turnstiles in the Oasis and I gave them what I would consider to be my number one piece of advice regarding this wonderful place. I told them that Animal Kingdom was designed to be explored. While they were waiting for me to make sure that everyone had indeed entered the park, they gathered looking at some exotic birds at the entrance to the Oasis. My advice was to do just that while they were in the park—stop and look, stop and appreciate, stop and soak in the nature that surrounds them in this beautiful place. Animal Kingdom is truly amazing and it deserves time. I guaranteed them that if they did so, Animal Kingdom will always pay off.

As we continue our tour through Animal Kingdom, we leave Dinoland behind and cross the bridge into Asia. Asia is an incredible section of the park awash in extraordinary details. I felt this way before Expedition Everest and its "base village" Serka Zong was built, and once that spectacular area was added to Asia, it swiftly became my favorite section of the entire park. Asia needs to be explored. The area is teeming with details and is filled with stunning architecture, delicious food, wonderful animals and plant life, and one of Disney's all time best attractions. I'm a big coaster fanatic and to say that Expedition Everest is my favorite coaster anywhere is no small statement. I would be enthralled by Everest if it wasn't chock full of details and theming. But the Imagineers weren't satisfied just building an extraordinary roller coaster. They pushed the limits of propping and theming in Serka Zong and created what amounts to its own little mini-land within Asia.

I love spending time in Asia. It's Animal Kingdom at its best. It's Disney Imagineering at its best. There's so much to see and do for everyone and I can't wait to be back there this summer. I started off this article saying that it's only been about a month since I've been there, and I'm booked to be back this July to celebrate my 50th. I'm quite sure a big chunk of that time will be spent in Animal Kingdom. So, let's see what I think shouldn't be missed with my Top 5 things to see in Animal Kingdom's Asia.

I think I've put places to get good iced tea on several lists of mine over this massive tour of every Walt Disney World park. You wouldn't expect that when ticking off the best to be found in each of the Disney parks, but I don't drink soda. While there's always a bottle of cold water attached to my back pack on those sweltering Orlando summer days, if I don't find a fresh, ice cold, good quality iced tea I'm just not refreshed. 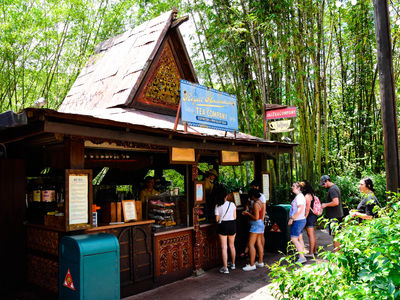 The Royal Anandapur Tea Company located along the Discovery River as you enter Asia, and serves various teas, coffees and pastries. Photo by Donald Fink.

This unobtrusive food stand in Asia is a must stop for me each time I visit. Grab an iced English Breakfast in the morning (or better yet the Green Honey Ginseng), pick out a pastry, and then go find yourself one of those perfect spots along the pathway from Asia to Africa to savor the treats and enjoy the views. If you're a hot tea drinker get ready to choose from a dozen different blends. You could try a new one each time you visit.

I won't begin to assume that everyone out there reading this is as big an Expedition Everest fan as I am. I know there's a large percentage of people out there that can't tolerate any roller coaster no matter how many props the Imagineers add to it. If you're one of the many roller coaster impaired that pass by Everest and don't make a point of stopping in the incredible gift shop at the ride's exit, than you are truly missing something special. 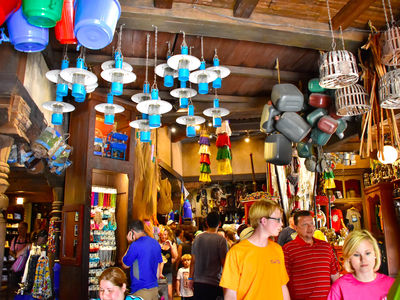 The Serka Zong Bazaar, a gift shop located at the exit of Expedition Everest, is full of items you might need for a trek up the mountain. Photo by Bonnie Fink.

You don't have to go on the ride to enjoy the shop. Make it a point to stop in and look at all of the climbing gear strewn all over the place; soak up the whole feeling that you're in a shop in the Himalayas. Many of my favorite articles of Disney clothing have come from this shop. The Everest fleece jacket that always begs people to ask me, "Did you really climb Everest?" came from the bazaar, as did my Serka Zong t-shirt that looks like it came from someplace a whole lot more exotic than Central Florida. It's a great place to shop or just to look around. Those of you that fear the yeti, need not fear the gift shop at the end of the ride.

Most theme parks out there have a raft ride like Kali River Rapids with a big raft that heads down a "river" and gets its passengers soaked. I've been on many of them. What makes Kali River Rapids so much more special can once again be attributed to the Imagineers making sure that every attraction follows a story line and is themed to the max. The queue to Kali River Rapids is a stunning example of the famous Disney difference. You will never be bored waiting in this line as it meanders through detailed buildings, including a Southeast Asian temple. 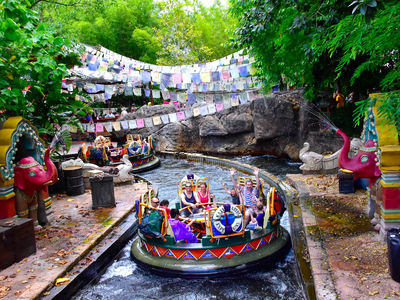 The twelve person rafts of the Kali River Expeditions will take you along the Chakranadi River in search of illegal logging and other environmental catastrophies. Photo by Bonnie Fink.

The theming continues as you board the raft and travel through the thick rain forest populated with bamboo and exotic plants. That beauty is interrupted by the stench of the smoke coming from the section of rain forest that has been decimated by loggers. The conservation message rings loud and clear, and it's a unifying theme that resonates throughout the park in each land. I don't imagine I have to say this to experienced visitors, but if you're new to Kali River Rapids, assume you will get soaked—not a little wet like on Splash Mountain—but soaked to the bone. Don't fret though, it might be just the thing you need on a hot Florida day.

Legend has it that when Joe Rohde, the Disney Imagineer behind the overall design of Animal Kingdom, wanted to drive home the message that animals were impressive enough to build an entire park around, he walked a live tiger into a Disney board room. A few moments in this magnificient creature's presence and the Disney suits were convinced that Animal Kingdom could work. Once again, as I mentioned in my first Animal Kingdom installment about Discovery Island, it always amazes me that these walking trails in the park aren't overflowing with guests. 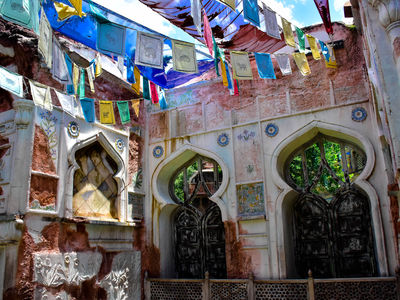 The Maharajah Jungle Trek is an amazing place to wander through. The cultures of Southeast Asia and India hold animals in high regard and the design of the path reflects that admiration. The grounds are meant to resemble a temple or palace that is now home to animal residents instead of humans. Make sure to admire those surroundings. The animals are the main attraction here, especially the aforementioned tigers, but the architecture and crumbling ruins are pretty extraordinary. Remember exploring a path like this is what Animal Kingdom is all about. Don't skip it as you run from ride to ride. You'll be missing out on something special.

Considering what I said in the preceding paragraph about places like the Maharajah Jungle Trek, how is it that I put a roller coaster in my number one slot? That's a fair question, and the pure and simple response is that from start to finish, Expedition Everest may be my all time favorite Disney attraction. I said a few paragraphs back that I'm a huge coaster fan, but that's not enough of a reason to give Everest the high marks. Everest is my all time favorite coaster anywhere, and it's the whole package that makes it extraordinary. It's such a masterpiece of Disney design that simply looking at it from far across the park will get me excited.

Even if you're not a huge coaster person I think you should get on line and walk through the amazing queue. It looks like the Imagineers cleaned out Nepal of vintage climbing gear on their trips there in the early days of designing the attraction. The same can be said for "yeti stuff," even including a yeti museum as part of the queue. The twists and turns, the view from the top, going backwards, and going forwards all combine to give you such an incredible experience. It truly is one of the best Disney attractions ever created. 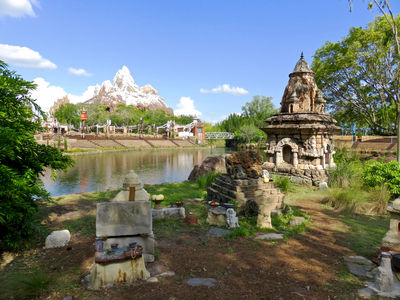 The extensive theming around the base of Expedition Everest can be seen all along the Discovery River. Photo by Alan S. Dalinka.

Much has been said about the giant yeti animatronic that no longer is able to take a swipe at you. It would be great if it still did, but let me relay this little story to you. My dad is the one that got me started on roller coasters decades ago on Rye Playland's Dragon Coaster. After riding Everest with me 10 years ago, we disembarked and he said that it was probably the most amazing ride he'd ever been on. I said to him, "What'd you think of the giant yeti? His response? "There was a giant yeti in there? It's clearly not all about the yeti.

Asia continues to impress me the more time I spend there. Now that Rivers of Light takes place on its shores, Asia is a full-blown and full-time destination within Animal Kingdom. It's a transformative environment. If you stroll through Asia, you do begin to feel like you've left Disney behind. You start to feel like you're actually in Southeast Asia. The details are everywhere. There are some wonderful animals to see. The plants and vegetation create a dense, lush environment. The food is interesting. There's some fantastic shopping, and not just of the Mickey Mouse kind. If you add it all together it's everything that Animal Kingdom should be.

I can't wait to make it back to Animal Kingdom this summer. We'll be headed down there with about 24 people celebrating my big old 50th. There are a few newbies on this trip, and some of them aren't quite sure what to expect out of Walt Disney World. The Asia section of Animal Kingdom is one of those places where I'm going to take those people experiencing the magic for the first time and watch as they realize that Walt Disney World offers a whole lot more than most people can imagine.

Thanks for coming along to Asia with me. As always I'd like to hear what you have to say. Click on the link below, let me hear your thoughts on Animal Kingdom's Asia and I'll see you next time with another Disney Top 5 as we head over to Africa.