Imagineer and Disney Legend Herb Ryman had a long personal connection to Disneyland from before it was even built and he has a private memorial in the park that few Disney fans know.

"Herb was a place master," remembered former Imagineer Eddie Sotto. "He understood production design and used historical context to bring real meaning to the places he created at Disneyland.

"When designing Sleeping Beauty Castle, he visited the famous Neuschwanstein castle in Germany; his visits to New Orleans during the development of New Orleans Square brought a realism to the area. 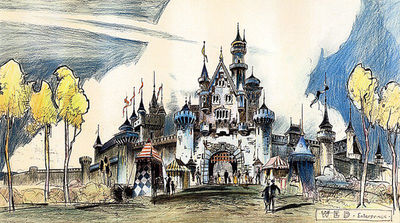 Herb Ryman's drawing of Sleeping Beauty Castle, based on Neuschwanstein.

"For Ryman, it was not just 'place making' but what people do in those places. His best known piece of advice to beginning Disneyland designers was to make their concept art 'specifically vague' so it captured the soul and emotion but left details for later."

Artist Herbert Ryman started working at the Disney Studios in 1938 after Walt saw an exhibit of his artwork at the Chouinard Art Institute. His work in the MGM movie studio art department since 1932, made him well-versed in painting fantasy scenes that had to seem real.

Ryman made significant contributions to the animated features, including as art director on Dumbo, Fantasia and Saludos Amigos among others.

He left the studio (he had no contract with Disney, just a friendship and a handshake with Walt) to work on the 20th Century Fox movie Anna and the King of Siam (1946) and years later toured with the Ringling Brothers Circus making famous paintings of that popular entertainment venue.

On Saturday morning on September 26, 1953 at 10 a.m., Ryman was working on a circus painting when he received an unexpected phone call at home. It was from his friend Richard Irvine who was working at the Disney Studio.

Suddenly, Walt Disney was on the phone asking Ryman how long it would take him to get to the Disney Studios.

"You're at the studio working on a Saturday?" Ryman asked.

"Yes, I can work on a Saturday or a Sunday or whenever. It's my studio," replied a surprised Walt.

"Well," Ryman said, "If I don't change I can get there in 15 minutes but if I shave and shower and change clothes it will be about a half hour."

"Don't change," said Walt. "Get here as quick as you can and I will meet you at the studio gate."

Ryman arrived and Walt escorted him to the Zorro building where Irvine, Marvin Davis and Bill Cottrell were waiting in a room filled with concept sketches, elevation diagrams and more.

Walt excitedly told Ryman about his plans for a unique amusement enterprise.

Walt finished by saying, "My brother Roy is going to New York on Monday to arrange for financing. You know bankers. They have no imagination. They just can't visualize it when you tell them so I am going to show them with a big sketch of the park."

An excited Ryman asked, "I would love to see it. Where is it?"

Without a pause, Walt answered, "You're going to do it."

Ryman immediately said "no." He felt in the short amount of time that he would only embarrass himself and Walt with any attempt on this massive and personal project.

Walt asked the others to leave the room.

"Walt paced around the room with his arms folded," Herb would later remember. "He stood and looked out a window with his back to me. He said quietly, 'Herbie, this is my dream. I've wanted this for years and I need your help.'

"He looked at me over his left shoulder with a little kind of sheepish grin like a little boy," Ryman said. "He had a tear in his eye. 'Will you do it if I stay here with you?'"

Ryman, moved by Walt's sincerity and wanting to help him, relented and, for the next 42 hours, the two remained in the building. Walt sent out for tuna salad sandwiches and malted milks for lunch to help sustain them.

They went over some of the preliminary work done by others and Walt's vivid verbal descriptions enhanced how the final vision should look. Marvin Davis' elevation diagram was added to the lower-right hand of the final drawing for reference to understand the layout.

Early Monday morning, Imagineers Marvin Davis and Dick Irvine walked into the room and found a bedraggled Walt and Ryman slumped near a vellum 43-inch by 70-inch illustration featuring a bird's-eye view of the proposed park.

Walt produced several copies of a booklet that featured the written prospectus, along with a copy of the Ryman illustration done with mechanical reproduction using brownline or photostat in the days before Xerox. Each of the copies of the famous illustration was colored by hand by Davis and Irvine.

"It was just a carbon pencil drawing with a little color on top of it, but Roy got the money so I guess it turned out all right," Ryman later said.

Ryman continued working on Disneyland attractions and was the chief designer for New Orleans Square. However, he is perhaps even better known for his design work on Sleeping Beauty Castle. He later went on to design Cinderella Castle in Florida.

"The one thing Walt had the most vivid picture of in his mind was Fantasyland with the entrance through a castle. The castle was all his idea," emphasized Imagineer Marvin Davis.

At first, the iconic castle was set far in the back, not front, of Fantasyland and resembled Herb Ryman's design for the cathedral-like shape with lofty towers of the castle in the 20th Century Fox film he had art directed called The Black Rose (1950).

Herb Ryman had visited the famous Neuschwanstein castle in Bavaria that influenced the final design. However, he was quite upset by the proposals of other Imagineers to just duplicate the iconic European structure.

"At the time we designed the castle," stated Imagineer Marvin Davis, "Neuschwanstein was a little obscure thing that nobody had heard anything about. But since we re-created it at Disneyland, it's in practically all the airline advertisements. They use it all over as a symbol of adventurous, fantasy-like castles."

One day Ryman was arguing with some other Imagineers near a model of the castle that they shouldn't just re-create a direct copy of Mad King Ludwig II's castle, but use it as an inspiration. He said that it was too close a copy and guests would notice the resemblance.

Davis told him he was crazy and said the majority of the guests would be local and would have never traveled to Germany. Ryman impulsively picked up the top of the model that had only been secured temporarily by a single loose bolt and he swiveled it around so that the turrets faced Main Street.

He was just curious to see how that simple change might look. They frantically told him to change it back because Walt was on his way to view it.

Behind them from the doorway, they heard Walt's famous voice say, "Oh, I like that a lot better". They all quickly agreed with the boss that it was indeed better that way.

In 1989, author and historian Jeff Kurtti interviewed artist and sculptor Andrea Favilli, who created the Disney Legend award, about the Herb Ryman "Miracle Tree," which was planted earlier that year in the landscaping along the east moat embankment of Disneyland's Sleeping Beauty Castle as a unique memorial to Ryman.

"In October of 1988, Herb Ryman was bedridden with the cancer that would eventually take his life. The room in which he lay was kept dark and warm in order to keep Herb as comfortable as possible.

"Plagued by the fear that he would not live to see Christmas, Herb asked his sister, Lucille, to get him a Christmas tree. He wanted a live tree, not a cut one, because he thought it was a shame to kill such a beautiful living thing.

"She got him a three-foot live spruce, which he had decorated and placed in his view on top of the piano. Thanksgiving passed, then Christmas and finally New Year's Day, but Herb didn't want to get rid of his Christmas tree.

"One afternoon in late January, Herb awoke to discover that his little tree was gone. His sister Lucille had removed the tree while Herb slept.

'Well, Herb, this room is so dark and warm, I thought the tree would just die in here.'

"Herb demanded the return of his tree, which was literally dragged from the arms of a departing trash collector. Herb would often brag about the tree, which he called his 'little miracle tree'. He would tell of how he saved it from the trash, and how it continued to grow.

"Even Bill Evans couldn't figure how the tree continued to grow in the murky environment of Herb's dark room. Herb was awed at the beauty of the new life, and commented that in all his years he had never simply seen a tree grow.

"When Herb passed away in February 1989, the tree remained in his room. I saw the tree and asked Lucille what she planned to do with it. She had no idea and so I asked if I could try to get the tiny spruce planted somewhere in Disneyland.

"At Herb's memorial service, Marty Sklar introduced me to Bill Evans. Bill arranged for me, Larry Hitchcock and Bob Stockemer to get the tree to Disneyland's lath house. There it acclimated while Bill and Becky Bishop staked out a spot for it near Sleeping Beauty Castle.

"One night, after the park had closed, a group of Imagineers met there to plant Herbie's tree. It included Eddie Sotto, Joen Kommer, Frank Armitage, Tim Delaney, Larry Hitchcock, Tim Onosko, Bob Stockemer, and myself.

"After a lengthy search in the dark for the pre-designated spot, each Imagineer in turn dug from the hole for planting. The tree was set in place and a light rain began to fall. Once the tree was planted, the rain stopped and we drank a toast to the life and memory of our friend.

"The tree continues to thrive in its new location. Since Disneyland policy prohibits publicly placed memorial plaques, the tree remains unmarked. However, a special botanical tag has been created to be placed near the spruce. It reads: 'Genus: Artisticus Species: Rymanus'."

The ceremony was done in secret on that cloudy night when Ryman's friends very solemnly dug a hole to replant the tree. Each person took a turn at digging. They opened a bottle of champagne to toast their departed comrade. In fact, they also buried a full glass of champagne along with the tree for Herb to join in the final toast as the sky started to mist.

The mourners threw their glasses against the side of the castle, shattering them into fragments. The original tree has since finally died, but each time it has been replaced by a new one to honor the legacy of the man who contributed so much to the Disney theme parks, especially Disneyland.

Ironically, it was the same location where Ryman had stood and done an interview for the Disney Channel. Some have claimed that original tree was actually a potted pine purchased by Ryman's friend and protégé, John Donaldson, while others say it was the first replacement, but all agree on everything else in this heart-warming little miracle story.