Welcome back to another Disney Top 5. It's finally getting warm here in New York. After a long winter, spring conditions abound and temps are climbing. As I write this, we're about to hit our first days in the 80s, which is pretty warm for May. Summer keeps getting closer and closer as does our big trip to Walt Disney World in July. The Yacht Club is beckoning and I'm ready and waiting to heed its call.

We're almost done with our tour around Disney's Animal Kingdom. Last time it was Africa. This time we're going to board transportation within a park to travel to a whole other major section of that same park. It's not the Epcot Friendship Boats or the Walt Disney World Railroad. Those modes of travel take you to places that you could otherwise walk to. To make it to this section of the park, your only option is the train. Let's board the only other railroad currently transporting guests through a Walt Disney World park—the Wildlife Express to Rafiki's Planet Watch.

This is the outdoor section next to Conservation Station where you can have the typical petting zoo experience. Affection Section has goats, pigs, llamas, donkeys, and more in an outdoor, enclosed area where you can actually get some up close and personal animal time. 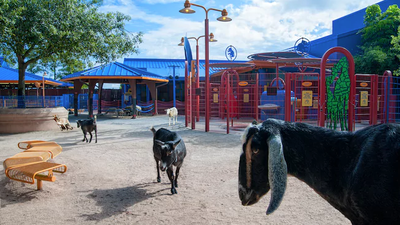 Meet and pet these guys in Affection Section. Photo ©Disney.

You can pet them, help groom them, and learn some things about them all as well. Granted, it's not like you're petting baby gorillas or something truly unique like that. Still, after checking out animals all day from a distance, it's nice to get to actually physically interact with some.

For a while when my kids were younger, meeting a Disney character was the pinnacle of their trip. All three kids were big on seeking out characters, getting autographs and photos with them, and, most importantly, keeping track of the unique ones they were able to meet. 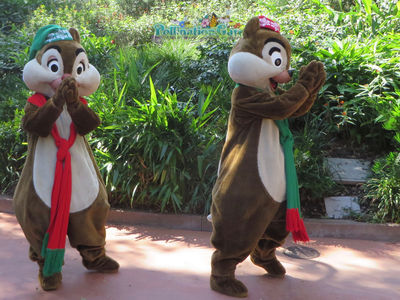 Rafiki's Planet Watch always seemed to be a good place to bag a few characters on their list. Crowds are not usually an issue back there, so we typically got to meet the characters with very little waiting. 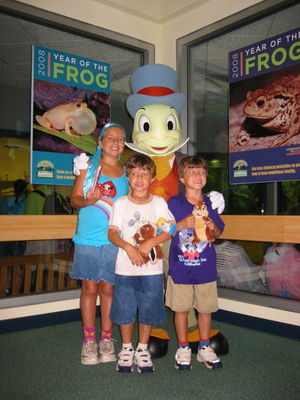 Jiminy Cricket and the kids in Conservation Station. Photo By Chris Barry.

Rafiki is pretty constant, but over the years we have met Chip and Dale, Pocahontas, Jiminy Cricket (a big favorite of this big kid writer), and a big favorite of all three of my kids back in the old days, Stanley.

One of the best things that reside back in this section of the park are the massive animal murals that adorn Conservation Station. They start outside and continue all the way in, literally wrapping the walls top to bottom with animals. 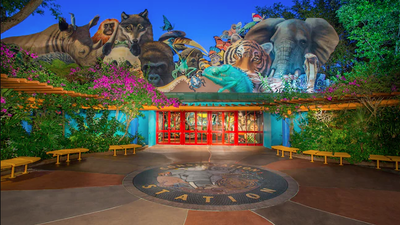 You could get lost in the murals of Conservation Station. Photo ©Disney.

One of my favorite Hidden Mickeys is in this mural. It's a tough one to find. I'll give you a hint: it's hidden in an animal's eye. Enjoy the search.

Anyone who knows anything about Walt Disney knows that one of his biggest passions was trains. Walt was a train fanatic, which is why there were real life locomotives at his beloved Disneyland. The same rang true when the Magic Kingdom was built in Orlando. That's why it's such a special thing that they included yet another vintage locomotive here in Animal Kingdom. 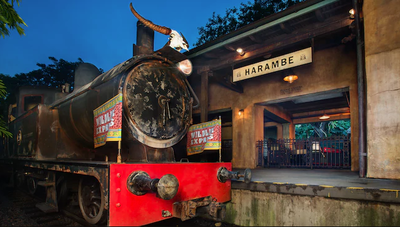 Enjoy the ride back to Rafiki's Planet Watch aboard a train pulled by this vintage locomotive. Photo ©Disney

It's only a 6 minute ride from Harambe back to Rafiki's Planet Watch, but the elaborate details in the station, the authentic looking train, and the views of the backstage animal enclosures where Animal Kingdoms residents retreat to at night make it a pretty interesting ride. The thing I like best is that it's the only way to get back to Rafiki's. You can't walk. Taking the Wildlife Express is the only way, and it's a fun and classic Disney way to be transported around a Disney park.

This is the major attraction of Rafiki's Planet Watch, and it's a worhtwhile one at that. What a wonderful way to spend some time escaping the Orlando swelter, all the while learning about nature and the animal residents of this amazing place known as Animal Kingdom. 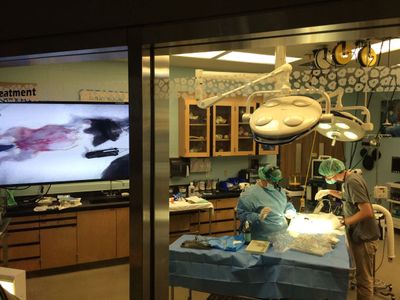 One of the interesting parts of Conservation Station is a look into animal surgeries, like this small rat being spayed. Photo by J. Jeff Kober.

If you're lucky enough to arrive early in the day, you might get to see the park's veterinary staff tending to an animal, even potentially performing operations. If you want to learn about animal care at Animal Kingdom, this is the place.

Be reminded, this is no Disney performance area. These are real doctors taking care of real animals. It's probably the most authentic attraction you'll encounter in all of Walt Disney World. There's no made-up backstory here. It's just science taking place right in front of you. It's also never the same thing twice, so you never know what you might find on each visit to Conservation Station. Be sure to check out Songs of the Rain Forest while you're there for some sonic knowledge and fun.

A good plan would be to head back to Kilimanjaro Safaris first thing in the morning; Rafiki's Planet Watch opens 30 minutes after the rest of the park. Enjoy the safari first thing in the morning when more animals tend to be out, and then when you finish, you can board a train over to Rafiki's and head straight to Conservation Station. If you're lucky, you might get to see an actual procedure being done on one of the animals.

What it boils down to is this, and it sounds completely obvious. Animal Kingdom is about—you guessed it—the animals. If you're in it for the animals, then you need to make sure you make Rafiki's Planet Watch part of your Animal Kingdom experience. It's a great place to escape the crowds, enjoy the cranking air conditioning in Conservation Station, and really expand your knowledge of the true animal kingdom. As I said when I started out this article, there are no big rides or shows back in Rafiki's but it should be considered an essential part of your visit to Animal Kingdom.

That's all for Animal Kingdom for now. I'm actually not going to head into the amazing Pandora - The World of Avatar just yet. So far, I've only walked around with my jaw scraping the ground in awe. The two major Pandora attractions have eluded me. I want to be fully informed before I tackle the newest of Walt Disney World lands in a Top 5 article. I'll be there in July determined to do more than just a walk through and then I can report back on my favorites,

As always, I'd like to hear what you have to say. Click on the link below, let me hear your thoughts on Rafiki's Planet Watch and I'll see you next time with another Disney Top 5.