An overcast early morning start to MouseAdventure is unusual, especially in sunny Southern California. However, by noon on April 29, the sun was shining down on the more than 500 players in Disney California Adventure. As the title of this year's game suggests, Disney's properties are mostly under construction, so Third Gate Games decided to capitalize on an obvious theme.

Starting the day off in the Downtown Disney AMC Theater, Joe lead a quick new team question and answer session to bring eager new teams up to speed on how to Adventure most effectively. At 9:30 a.m. the event kicked off with a warm welcome from David to everyone in the theater amid sadness that it would be our last time together in that location… due to construction, of course. Essential day-of information and an explanation of rules followed before teams were released for the scatter start. In a change from recent years, teams proceeded directly into Disney California Adventure to find their scatter locations along the parade route. 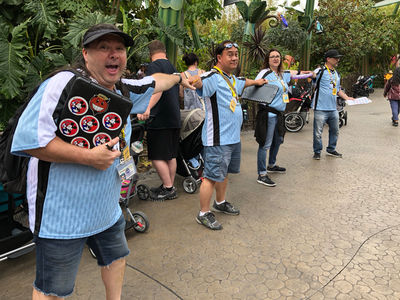 Masters team Naboombu All-Stars demonstrate how far apart teammates may be during an event without violating the rules. Photo by David Perry.

Park guests are familiar with the shop windows on Buena Vista Street—but do they think to look through all the windows? MouseAdventure players know to scour every nook and cranny, and in the case of the quest in this area, had to also look through the windows of the Packard parked by Oswald's to find one of the more elusive clues. Attention to detail was also a must, as spelling and capitalization were essential for the second half of the quest. One player from each team was chosen to color in areas of an animation cel; different colored markers labeled with the correct answers were mixed in with colors labeled with incorrect answers to increase the challenge. 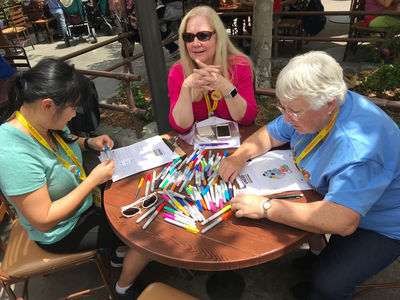 The residents of "a bug's land," facing imminent extermination, provided one final quest before the area undergoes its transformation to a superhero theme. Teams used the candy-coated wooden sticks at the base of Flik's Flyers to decode a message that sent them to ride Heimlich's Chew Chew Train and discover the final food shown along its path. Some teams were more excited than others to experience this attraction one last time. 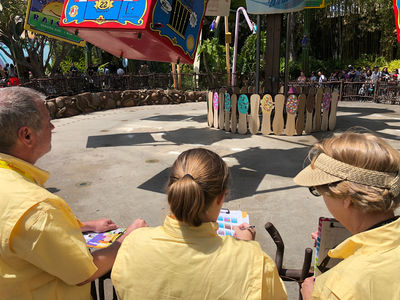 The key to the Paint Chips quest in "a bug's land" becomes apparent when Flik's Flyers is in motion. Photo by Stephanie Wien.

Hollywood Land's Animation Building provided some shade and cool air for teams tasked with creating their own wallpaper out of images displayed on the screens from various Disney and Pixar animated features. Advanced teams were given an additional quest in the area to decode a message written in Celestial, although they weren't explicitly told its location. Stickers on the Fastpass machines for Guardians of the Galaxy: Mission Breakout! list words in both Celestial and English, an essential key to solving this challenge. 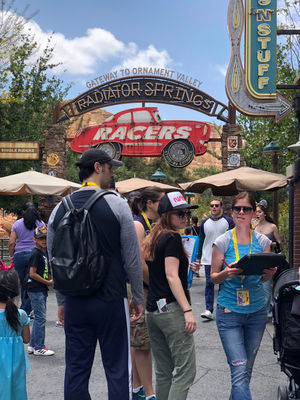 A team searches Cars Land close to one of the more elusive answers. Photo by Stephanie Wien.

Grizzly Peak's Redwood Creek Challenge Trail hosted two quests, with the more challenging of the two reserved for Advanced-level teams. Teams used information from the Millennium Tree to answer a series of questions that set them on a specific path around the area. As they reached specific points along the way, they collected information that then decoded to give them a final question. Teams that successfully completed this quest learned that the area is not available after dusk due to "rambunctious bear activity." 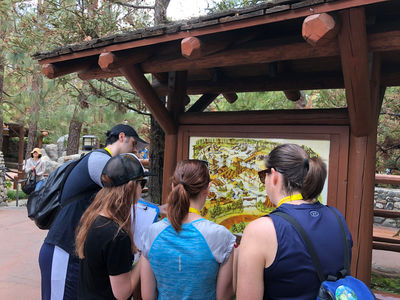 The Redwood Creek area map provides some key information for Advanced teams on the Critical Path. Photo by Stephanie Wien.

What to do when faced with a plethora of construction walls? Use them for a quest. Paradise Pier's current maze-like state presented the opportunity to use their recurring designs to encode a question. Teams were given cards corresponding to the different panel patterns. Letters on their reverse side provided the key to determine the final question. 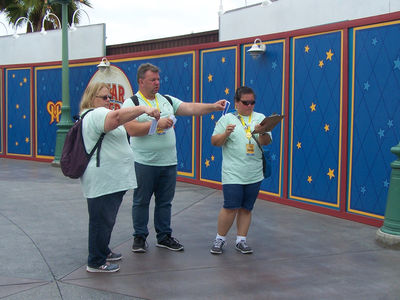 "The Other Mice" puzzle over the panels of Paradise Pier. Photo by Lora Parral.

Not only did some teams don safety vests for the event, but the MouseAdventure Inspection and Code Enforcement (MICE) team were out around the park, with orange vests and clipboards at the ready. Teams located each inspector and noted the information on each of their clipboards. When they had accumulated all seven sets of letters, a final question was revealed. Sharp-eyed teams also noted that each inspector had a button with four additional letters on it. When combined, these letters formed the question of the "hidden quest." 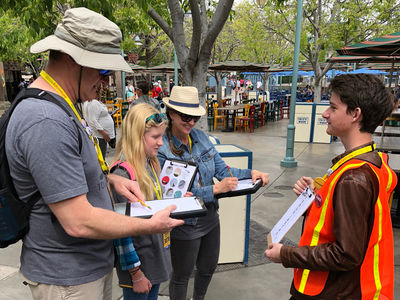 MICE Inspector Nathaniel presents his clipboard to a team in the Pacific Wharf area. Photo by David Perry.

Eye spy photos of corrugated metal roofs and siding (of which there are many), trivia, an additional quest in Cars Land, and one quest for Advanced teams only in Downtown Disney rounded out the game. Teams turned in their answers by 4:00 p.m. and went to recover with food and drink.

Full results for all teams are available on the event results page. Scores are out of a total possible of 408 for Basic teams and 528 for Advanced teams. A full list of quests with answers will be posted on the MouseAdventure website soon. The best new team (not otherwise placing) was Once Upon a Dream with 370 points, who placed tenth in the Basic division.

The top three Basic teams were:

The top three Advanced teams were: