Welcome back to another Disney Top 5. For quite some time now we've been touring all of the lands of each of the four Walt Disney World parks. Last time I finished up Animal Kingdom... almost. If you've been reading all along for this ongoing series then you might recall that I left off back in Rafiki's Planet Watch. I covered all of Animal Kingdom's lands except for one - Pandora - The World of Avatar. I'm skipping this newest of Disney lands because I have yet to experience the two main attractions, The Na'vi River Journey and Avatar Flight of Passage.

On my last trip, we walked through the jaw dropping new world that the Imagineers created. I walked into the shops, into the restaurant, and all through the land, but we weren't able to get onto the rides. I was chaperoning a school trip and the 2-hour wait just wasn't happening. We didn't get our tickets until a few days before the trip so FastPass was out of the question. I'm headed back to Walt Disney World in about two months—just saying that gets the blood pumping—and I absolutely plan on getting myself onto these two new rides and then I promise a full Top 5 list on the entire land. That said it made sense to jump parks and head on over to Disney's Hollywood Studios to cap off this series.

There are a few reasons that I've saved this park for last. The first reason is that currently, as I'm sure all of you are aware, Hollywood Studios is under some massive construction. That means that the whole park is in a huge transition period. While I'm pretty sure that the two main streets of the park, Hollywood Boulevard and Sunset Boulevard, will remain fairly unchanged for many years to come, it's kind of hard to tell exactly what the makeup of the park's various lands are really going to look like once the work is all done. One thing is for sure, it won't be the same Disney's Hollywood Studios that we know today. As far as this series goes, I'm writing about the lands that are currently in front of me on the latest edition of the Hollywood Studios park map. When I'm down there in July, Toy Story Land will be up and running so I'll be able to write about that after I return home. The whole massive transitional phase that Hollywood Studios is undergoing necessitated me leaving it for last, but that's not the only reason. The other is more personal.

I have to admit, Disney's Hollywood Studios is my least favorite of the Walt Disney World theme parks. If you know me well enough—and know what my interests are—that fact may be a little surprising. After all, some of my all-time favorite intellectual properties reside here: The Muppets, Indiana Jones, and Star Wars. It doesn't get much better than that for me really. So, what is it about the Studios that has always put it last on my list going way back to the Disney-MGM days? I've soul searched this and the honest fact is that I've spent the last 30 years of my life working in television in various capacities. I've been behind the scenes. It's work for me. Not that I haven't enjoyed it, but it's still work. When I head down to Disney, I don't want to go behind the scenes of the movies; been there, done that. The original concept for the park turned me off from the get-go.

I've also never been crazy about the frequently huge billboards in the park promoting the latest ABC programs. Just because I love Disney doesn't mean that I love the ABC television lineup. I want to escape to Walt Disney World and leave the real world behind. Seeing giant ads for TV shows brings me back to the real world, and that has always been a big drawback for me when it came to walking around the Studios.

The park has gotten away from that original concept over the years. Once the actual filming studios were shuttered and the animation studio closed down, this was no longer a behind the scenes park. It may be an unpopular view, but good riddance to the Backlot Tour and the Streets of America. I never cared for either section of the park. Don't even get me started on the Lights, Motors, Action show. That show couldn't close soon enough for me.

In my eyes, the future of this park is brighter than it's ever been for me. I've already warned my wife that if Star Wars: Galaxy's Edge is anything like I'm envisioning it to be, it's going to be problematic for me to not be there a lot. I'm excited for Toy Story Land. I'm glad my beloved Muppets are still there. Fare thee well Pizza Planet, and hello PizzeRizzo. I'm good with all of the changes that this park is going through.

Our last few trips have generated some truly great times at Hollywood Studios and, in my humble opinion, it's only going to get better. Let's hop on the Friendship Boat from the Yacht Club and head over to the Studios. The best place to start is typically what you encounter first, so let's start at the very beginning and count down the Top 5 things to see on Hollywood Boulevard at Disney's Hollywood Studios.

This sign is just one of those Imagineering details that I have always loved, even though it's nothing major. As you head down Hollywood Boulevard, you see a lot of neon, and this sign is on top of Pluto's Toy Palace. 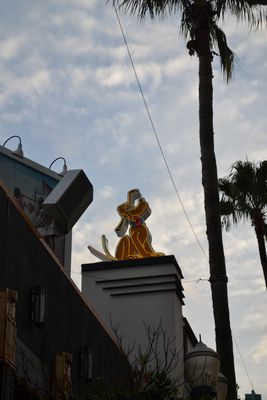 There's just something very cool about the neon Pluto sign, especially at night when he's wagging his tail. It's the kind of thing that I'd love to have hanging on the wall of my home. It's just a small thing to look up at, but if they ever took it away, I'd be heartbroken.

Every Disney theme park has its main shop. The Magic Kingdom has The Emporium, Epcot has MouseGear, and Hollywood Studios has Mickey's of Hollywood on Hollywood Boulevard. 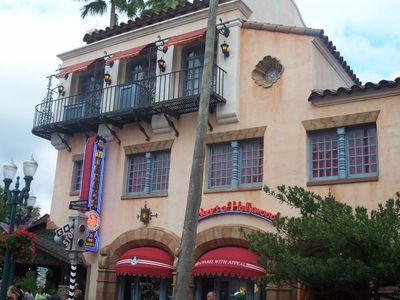 It's the perfect size shop to browse through as you enter or leave the park. While the merchandise is pretty standard fare, it's the decor that I love, more specifically the giant Mickey statues. 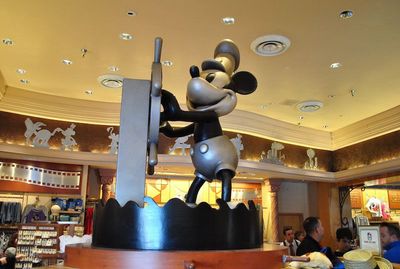 The Steamboat Willie statue from Mickey's of Hollywood. Photo by Chris Barry.

Even if you're not looking for a souvenir, make sure to pass through and check out Steamboat Willie, Sorcerer Mickey from Fantasia, and Bandleader Mickey from the 1935 animated short The Band Concert. Once again, these are the kind of special touches that I love seeing as I wander through a Disney park.

At the end of Hollywood Boulevard is a Disney and Hollywood landmark, The Brown Derby. I have yet to dine inside this legendary (and pricey) Disney dining establishment. What most guests don't realize is that sitting there right alongside the venerable signature restaurant is the Brown Derby Lounge. 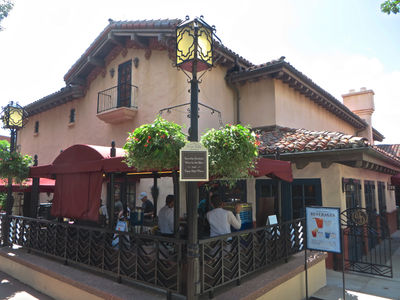 You can easily sidle up to the bar outside and order yourself a classic cocktail with some really killer small plates of food, and all without an Advanced Dining Reservation. Once again, the Disney uninitiated would have a hard time believing that I can sit at a table inside one of their theme parks and order an 18-year-old Macallan single malt scotch, some tamarind-glazed pork belly, or better yet the Andouille crusted shrimp and grits. It's a far cry from ordering a churro and a Coke. Quality high end food and drink out on the patio without a reservation? Point me down Hollywood Boulevard and I'm there.

Some of you may call foul because this technically isn't on Hollywood Boulevard. It's outside of the park itself in the plaza just before you hit the security tables. 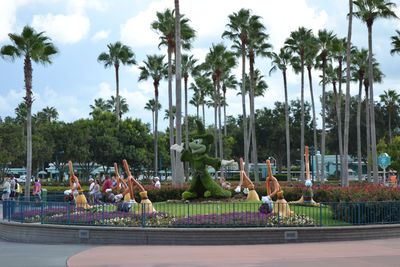 The "Fantasia" topiary garden is located in front of the entrance to Disney's Hollywood Studios. Photo by Samantha Barry.

The topiaries are a can't miss photo-op that I couldn't fit it into any other "land" in the park, so I placed it in with the first land you hit once you enter. That seemed pretty fair. I'm a huge fan of Fantasia and Sorcerer Mickey is my favorite; seeing him as I'm getting ready to enter the park makes me very happy.

I don't think that it's a stretch to say that grabbing a spot at the far end of Hollywood Boulevard and experiencing Star Wars: A Galactic Spectacular might just be worth the price of admission for a day at Hollywood Studios all by itself. 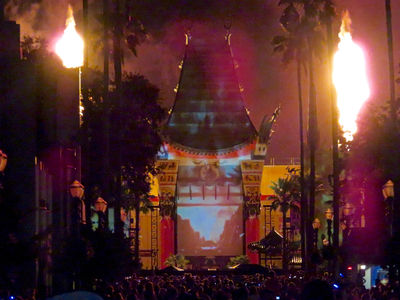 Star Wars: A Galactic Spectacular is impressive when viewed from the entrance to Hollywood Boulevard. Photo by Alan S. Dalinka.

The Star Wars fans in my clan were all pretty excited to see the fireworks spectacular for the first time two years ago. The word spectacular belongs in the title because this show truly lives up to its name. Fireworks, projections, lasers, music, and tremendous flames... I could go on and on. I have a sentimental attachment to Illuminations for sure. I always adored Wishes at The Magic Kingdom and I love its replacement Happily Ever After. That said, Star Wars: A Galactic Spectacular is probably the best fireworks extravaganza I've ever seen. It amazed the Star Wars fan in me. It blew away the fireworks fan in me. I just remember the look of wonder and awe on all of our faces once it ended and I can't wait to be back there again this summer. What I'm really most excited about this time is being there with my dad and my brother. They're both responsible for putting me on the Star Wars path and it's going to be spectacular to see it with them both for the first time.

It seems like over the years I've developed a like/dislike kind of relationship with Disney's Hollywood Studios. I certainly love Star Tours, Toy Story Mania, the Tower of Terror, and Fantasmic. They're some of my Walt Disney World tried and true favorites, and yet, it's still the last park on my list. We've spent several shorter trips down there without ever setting foot in the park and we've all been just fine with that. The funny thing is, I have had a lot of great times there so I won't knock it that much. I do find it less magical than the other three parks but I think that's going to be changing in the next few years with the major additions headed our way. Disney has eliminated much of what I didn't care for at Hollywood Studios and left my favorites intact, so maybe the tide is turning and this will soon become my new favorite place to be.

At any rate, if you long for the days of Hollywood Studios being the "Hollywood that never was and always will be," then Hollywood Boulevard is the place for you to be. The decor, the architecture, and the Citizens of Hollywood should all take you back to Disney's version of Hollywood. As the park changes and morphs into something else, my guess is that Hollywood Boulevard will more than likely stay the same and continue to elicit that feeling that people yearn for when they think of classic Hollywood. If that's what you're looking for, then do as I always advise upon entering or leaving any Disney park. Take your time. Look for the details and let it all soak in.

As always, I'd like to hear your thoughts. Click on the link below, let me hear what you have to say about Hollywood Boulevard and I'll see you next time as we head towards the Echo Lake area of Disney's Hollywood Studios.