As you're reading this, we're just returning from the latest jump into Star Wars hyper space with Solo – A Star Wars Story. I'm not going to get into a full review of the newest Star Wars film, but I'm smiling right now (let's leave it at that). Star Wars has been such a huge part of my entertainment life for so long now, it's hard to remember a time in my nearly 50 years of existance without it. I fondly remember having my young 9-year-old mind completely blown away by the original Star Wars film, and I've been on the bus ever since.

It's quite fitting, therefore, that after seeing a Star Wars movie in the theaters, I come home to write about the area of Hollywood Studios that has, at least for another year or so, the most extensive Star Wars presence around. There's plenty more to see, do, and eat in the Echo Lake section of Disney's Hollywood Studios, but it's the AT-AT walker, the speeder bike, the Ewok treehouses and, of course, Star Tours that brings me back to this corner of the park on a consistent basis.

As I eagerly await the arrival of Star Wars: Galaxy's Edge in 2019, this is all I have to immerse myself in that galaxy far, far away. It'll do for now. It's been making do and making this big old kid smile for a long time now, so I can't complain. I've always wanted more, and I'm beyomd thrilled that it's finally on its way. I could do an entire Top 5 on just the Star Tours attraction. Heck, I could probably do one on just Tatooine Traders, the gift shop that you let out into after your Star Tour is over. Perhaps another time.

Today, let's focus on the entire area of Echo Lake, named after an artificial lake in Downtown Los Angeles that has served as a set for many films all the way back to Hollywood's silent era. The architecture surrounding the lake is supposed to be reminiscient of classic Hollywood, and needs to be appreciated. As we head towards the two major attractions, Indiana Jones and Star Tours, we leave the streets of Hollywood behind and enter big-time blockbuster movie sets. It's an interesting and fun section of Hollywood Studios, jampacked with details both great and small. Keep your eyes and ears open as we stroll through the Echo Lake area of the park, and be bombarded with all things Hollywood—as we count down my Top 5 things to see in Echo Lake at Disney's Hollywood Studios.

Here's some theming that the Disney faithful have long been aware of but I'd be willing to bet the average guest just walks right past on their way rushing to the next attraction on their list. As soon as you enter the Echo Lake area and see the "ship" that contains Dockside Diner (itself a classic Hollywood reference), you will find a few "wood crates." 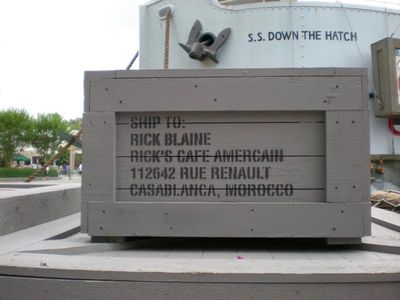 This crate pays an obvious tribute to "Casablanca." ©Disney.

They look fairly unassuming and fit in with the waterfront setting. But, if you look closely, you'll see that they contain references to some of Hollywood's all-time greatest films such as Citizen Kane, Casablanca, and The Producers. Look for the sender and addresees on each crate and you'll find names like Rick Blaine, Max Bialystock, and Charles Foster Kane. It's a nice touch by the Imagineers, and I hope they always make the cut as the park evolves.

It took me a long time to finally eat back here and once I did, I was quite glad to discover this fun counter-service restaurant in Echo Lake. Although not the best that the park has to offer, the food is decent, and they do cook up a pretty good burger. I'm more of a fan of the Caprese sandwich and my kids always get a kick out of the Darth Vader waffles. But it's really the props that you come back here for. 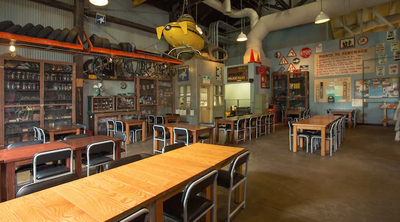 One of the many prop-filled rooms at the Backlot Express. ©Disney.

The Backlot Express is themed to be a backstage area of a film studio where props and set pieces live alongside various types of machinery and paints for fixing and adorning said props. It's a pretty accurate representation and is quite literally packed to the rafters with stuff to look at. Eat your food and then take the time to walk around. You won't be the only ones, I promise you that.

Let's face it. If I couldn't have Luke's landspeeder from the original Star Wars film, then there's really only one other personal vehicle from the Star Wars universe that I'd want: a speeder bike from Return of the Jedi. If you're a Star Wars fan, you know there's nothing cooler. 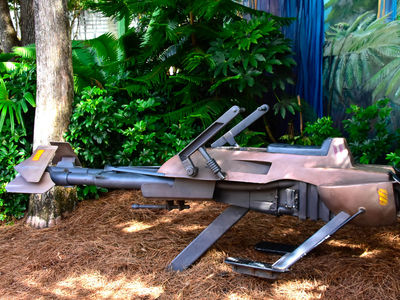 This speeder bike is located in front of Star Tours. Go ahead... have a seat. You know you want to. Photo by Bonnie Fink.

So, take the opportunity to have a seat and take a corny photo of yourself "flying" through the woods of Endor. You know you want to. And every one of us corny Star Wars dads has gone straight there with our kids to snap a picture of them on the speeder bike as well, right?

I've made no bones about the fact that the whole behind-the-scenes-of-the-movies theme that is original to this park does nothing at all for me. I've been behind the scenes of movies and TV shows and it's an awful lot like work to me and not my idea of vacation. But while I have worked on sets featuring everything from The Muppets to shoe commercials, I've never worked on anything as cool as an Indiana Jones film. So, taking the time to see the Epic Stunt Spectacular is a worthwhile thing for me to do. 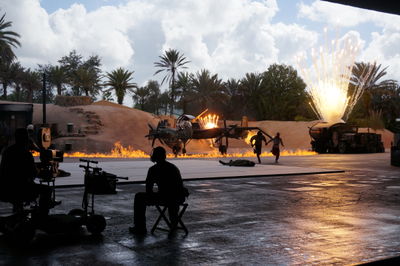 An up close look at one of the most famous scenes from "Raiders of the Lost Ark" plays out in Hollywood Studios' Indiana Jones attraction. Photo by Adrienne Vincent-Phoenix.

If you're as big an Indy fan as I am, this attraction is a must. If you want to see things blown up and go on fire, then it's also a must. There's been rumors swirling for some time now about this old attraction going away, and there's even been talk of a mini "Indy Land" replacing it, so experience it while you can. It's still a good time after all these years.

Here's one of my big Disney regrets. Imagine how amazing it would have been to be the young Star Wars fan that I was and be able to walk into a Disney theme park and see a life-size AT-AT walker? Or the aforementioned speeder bike? Maybe "regret" is the wrong word, because, after all, Hollywood Studios was nowhere near a thought when I was 10 or 11 and watching the original trilogy of Star Wars films. 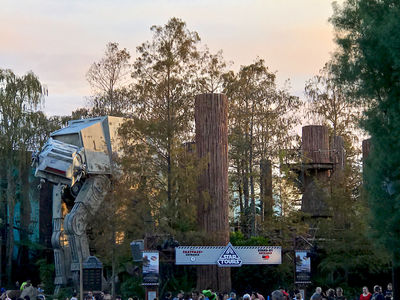 The AT-AT walker and the Ewok village tower over the Star Tours attrction at Disney's Hollywood Studios. Photo by Alan S. Dalinka.

The first time I saw it as an adult—I was pretty darned happy. I can't imagine an 11-year-old me walking into the park and seeing it for the first time instead of the grown-up me. I know it's a cliche thing for us Disney fans, but, in my own humble opinion, this is exactly what Walt was looking to do when he designed and built Disneyland. He wanted his guests to be able to walk into the stories that he was telling in film and on television. That was the whole point. Star Tours does that for me—and I know Star Wars: Galaxy's Edge is really, really going to do that for me. Until then, Star Tours is it for me. I'm a wide-eyed 10-year-old every time I walk back there, and it never grows old.

Obviously, my love of Star Wars and Indiana Jones comes through pretty strongly, so this area of the park is a major stop on my day touring the Studios. But don't take my word for it, and don't just rush to the two big attractions here in Echo Lake. Take time to look at the architecture. Enjoy the giant dinosaur, Gertie, a tribute to the architectural style known as California Crazy. Pull that rope outside of the Indy attraction. Stop and watch Darth Vader battle young Jedi on the stage next to Star Tours. Explore all of the props in Backlot Express.

This land is sure to be altered sometime in the near future as the park continues to evolve. Let's hope they keep the Hollywood tributes intact, as they are the heart and soul of this theme park. I've heard rumors or speculation that Star Tours might go away once Galaxy's Edge is up and running. I hope that's not the case. They'll need it. The more Star Wars the better in my eyes!

Thanks for checking out my Top 5 in Echo Lake. As always I'd love to hear what you have to say. Click on the link below and let me hear your thoughts on the Echo Lake area of Disney's hollywood Studios and I'll see you next time with another Disney Top 5.