Most places at Walt Disney World are designed and created with a great deal of thought and planning, and with that planning is nearly always a full and rich backstory. The backstory is important because it helps guide the development of everything from the architecture to the activities in the project.

So what happened to DinoLand? Is this a fluke? Is it a huge mistake that slipped under the radar at Disney's Imagineering, or is there more? We spent some time looking DinoLand over, and here's what we learned:

It turns out that DinoLand has one of the richest backstories of anywhere at Disney, in any park. In doing our research, we found several versions of this story, so what we're about to repeat might not be the "official" word—and it might not be what you've heard—but it represents our best interpretation from all the versions we've encountered.

Back in 1947, there was a little-known gas station along Highway 498 in Diggs County, somewhere in America's heartland. A couple known as Chester and Hester owned the gas station along that road. They were incredibly cheap, squeaking out a living, but never quite getting ahead. There was also a fishing lodge nearby that housed vacationing fishermen.

One day an amateur paleontologist was digging around the area and discovered a bone. He took the bone to some of his professional paleontologist friends and it was confirmed as a major find of dinosaur bones. 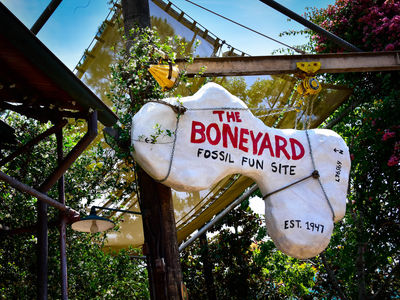 The Boneyard Fossil Fun Site is the location where the original dinosaur bone was found. Now it's a fun place for the kids to play. Photo by Bonnie Fink.

Shortly afterward, a group of paleontologists banded together and purchased much of the land where the bones were found, including the fishing lodge that was near the site. They formed an organization called the Dino Institute and began a major dig where many important discoveries were made.

The fishing lodge was initially used as housing and a cafeteria for the staff, including the college students and interns working on the dig site. Later, the lodge was turned into a restaurant to generate revenue and accommodate tourists wanting to visit the site, but also remained a dorm for the students. 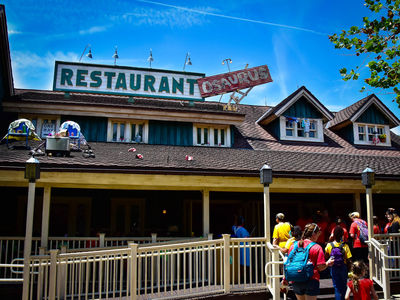 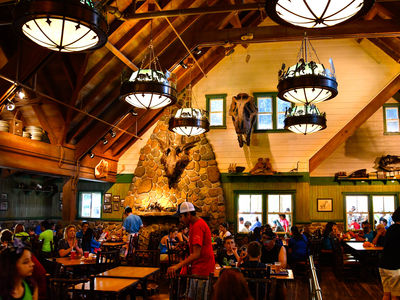 As you enjoy a meal at Restaurantosaurus, you can see the history of this building's backstory. It was once a fishing lodge, then a dormitory, a museum, and finally a restaurant. The detail is everywhere in this remarkable building. Photo by Donald Fink.

At one point, the lodge was used as a museum in addition to a dormitory and cafeteria. Bones were placed on the walls and the downstairs area was used to educate tourists.

The students also opened a walk-up counter where tourists could buy ice cream cones, cookies, and soft drinks. They called it Dino-Bite. 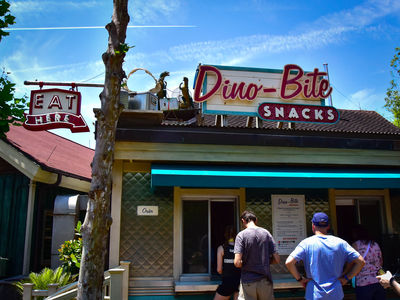 Haagen-Dazs ice cream, sundaes, floats, and pretzels can be found at Dino-Bite Snacks. It seems almost funny how, according to the backstory, the students pranked everything by writing "Osaurus" after a name, but this restaurant somehow escaped the joke. Photo by Bonnie Fink. 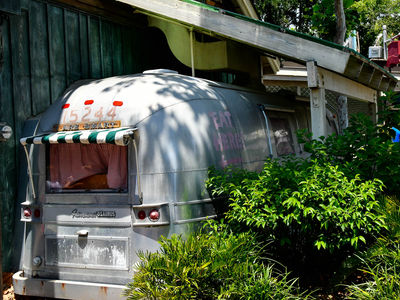 Take the time to look at all the details, like this Air Stream trailer, which did not escape the "Osaurus" prank from the grad students working on earlier digs. Photo by Donald Fink.

Not wanting to be left out in the cold in terms of a quick profit, what with all the tourists coming to see the bones and all, the gas station owners, Chester and Hester converted their station's parking lot into Chester and Hester's Dino-Rama!

This is where the confusion sets in among Disney fans. You see, Chester and Hester were cheap. Really cheap. Why do something right when you can get by with half-way? So their Dino-Rama! was born to resemble a cheap parking lot carnival, complete with cheap rides and midway games where you can spend five dollars and maybe win a fifty-cent stuffed animal.

The cast members in Chester and Hester's Dino-Rama! refer to themselves as "Cousins." Turns out that Chester and Hester were too cheap to actually hire employees, so they used family to staff all the rides and games. 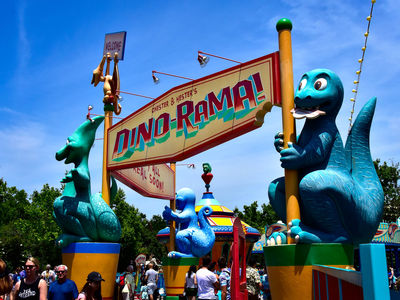 Entrance to Chester and Hester's Dino-Rama! Photo by Bonnie Fink. 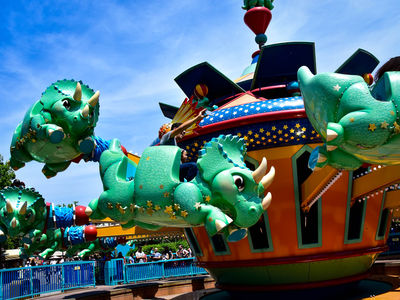 TriceraTop Spin is a fun ride for all ages. Photo by Bonnie Fink. 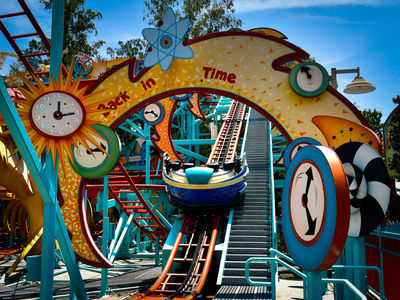 Primeval Whirl is a time-machine coaster. It has a "back in time" theme, which might be the Chester and Hester cheesy response to the Dino Institute's time rover experience. Photo by Donald Fink. 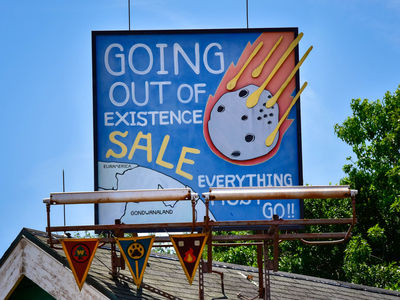 Take time to look around at the fun signs in DinoLand U.S.A. When you know a bit about the backstory, you can appreciate the faded plywood signs and the buildings that needed paint ten years ago. Something that's not depicted perfectly in this image are the names of the two continents that are thought to exist during the period of the dinosaurs, around 400 million years ago. The names of the continents are Euramerica, and Gondwanaland. They're real names. Check it out next time you're in the park. Photo by Bonnie Fink. 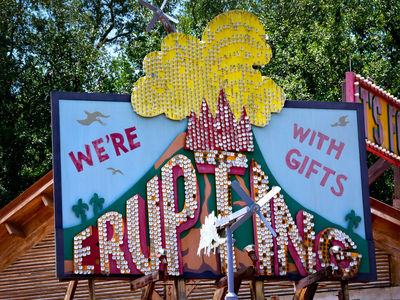 Look at the missing glitter on this sign, as well as the faded paint. You'll not find anything on Disney property that's in need of repair as badly as it is at Chester and Hester's Dino-Rama! This can't be a mistake, but rather, we think it's a very clever design. Photo by Bonnie Fink. 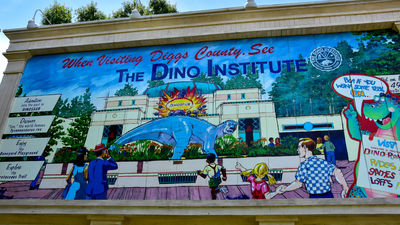 Notice how this roadside advertisement for the Dino Institute is more sophisticated, and in far better repair, than all of the signs at Chester and Hester's. Again, an indication that Disney is following a clever backstory to the evolution of DinoLand. Photo by Bonnie Fink. 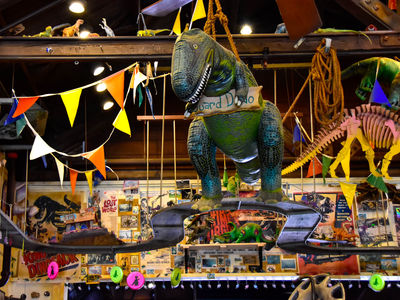 Inside of Chester and Hester's Dinosaur Treasures there's a lot to see, even if you're not buying. Photo by Bonnie Fink. 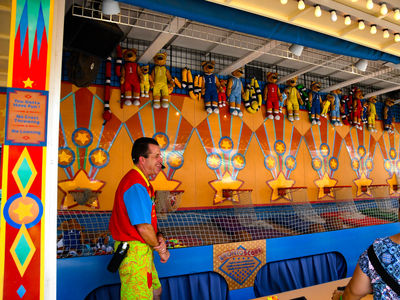 Bronto Score is one of several carnival style, midway games at Chester and Hester's Dino-Rama! Photo by Donald Fink. 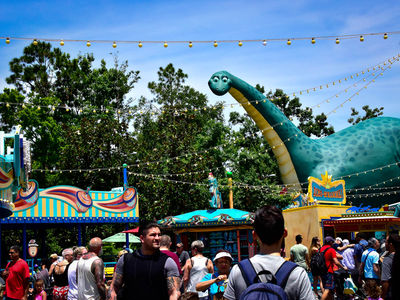 On the way to Asia from DinoLand, you'll encounter a friendly looking brontosaurus that looks over DinoLand. She's actually a cementasaurus, or was it a concretadorian? Her name escapes us at the moment, but if you know, leave a comment. Photo by Bonnie Fink.

Back at the Dino Institute

In the meantime, the Dino institute was having financial trouble, so they hired Dr. Helen Marsh in the early 1970s. Dr. Marsh had a reputation of saving organizations like the Institute from financial ruin. Within days, she purchased Chrono-Tech, a research company that had recently lost its government grants. Six months later, Dr. Marsh announced that her company had invented time travel, and scientists—and later tourists—could venture back in time to visit the dinosaurs.

As you might imagine, this drastically changed the financial situation of the Dino Institute, and in 1978 a new state-of-the-art facility was dedicated to the Time Rover. 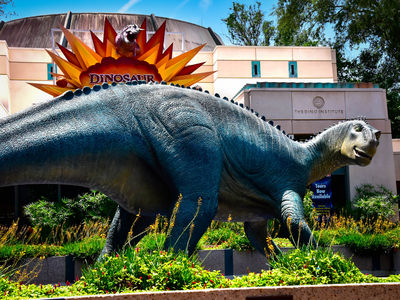 This ride, simply called Dinosaur, will take you back in time to save a dinosaur from extinction. Photo by Bonnie Fink. 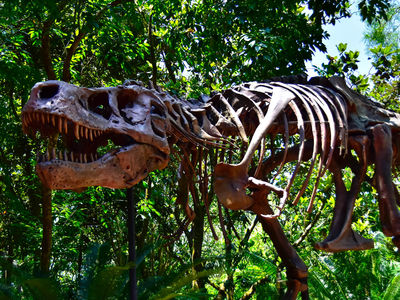 This summer, there's an activity in DinoLand that's a must-see for the kids, called Donald's Dino Bash. It seems that Donald Duck has recently discovered that he's related to ancient dinosaurs, and wants to celebrate his newfound family by having a party.

During the day it's a photo op featuring Donald, Daisy, Scrooge McDuck, and Launchpad McQuack, to name a few. You can also find Chip and Dale, but they're disguised as dinosaurs. All these guys hang out in various locations throughout the land and greet guests, getting plenty of photos.

During the evenings, Chip and Dale—still dressed as dinosaurs—host a dance party. We haven't attended the party, but judging from the normal sound track that plays during the day, it should be lots of fun for the kids. Those of us who are old enough can remember the music from last century too. Some of us still know the words. 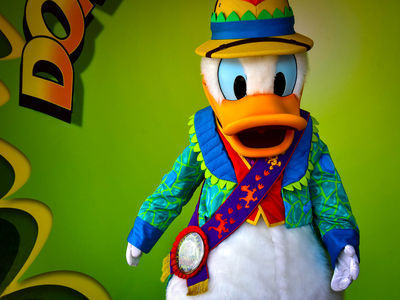 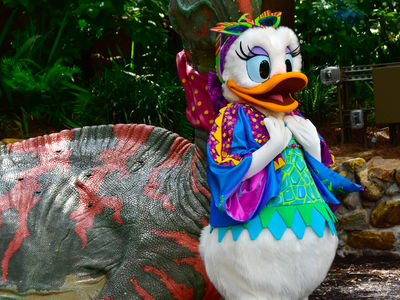 Have your picture taken with Daisy Duck, who appears daily until 5:30 pm at Donald's Dino-Bash. Photo by Bonnie Fink. 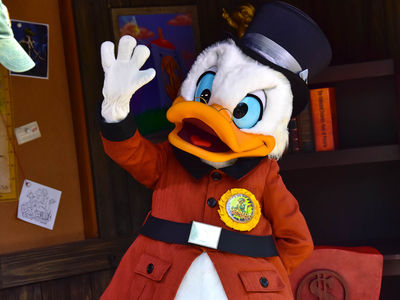 You can meet Scrooge McDuck daily at Donald's Dino-Bash. You may not know this, but Scrooge McDuck was born/hatched in 1947. He's a Peking Duck but speaks with a Scottish accent. Mr. McDuck is a wealthy, self-proclaimed "Adventure Capitalist." He first appeared in Dell's Four Color Comics, playing himself (and Donald's Uncle), in Christmas on Bear Mountain. Photo by Bonnie Fink. 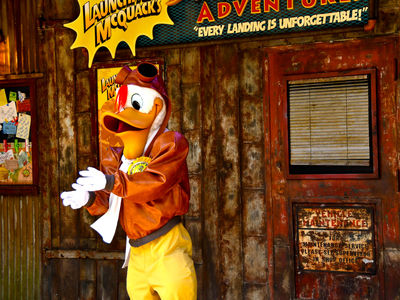 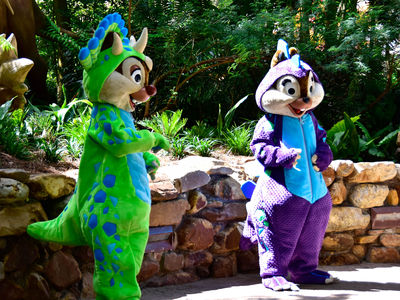 It's not every day you can meet chipmunks dressed as dinosaurs. Photo by Bonnie Fink. 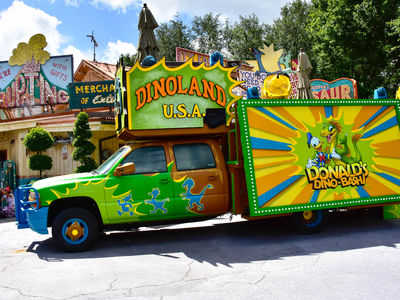 This is the DJ truck used nearly every evening this summer for the dance party, Donald's Dino Bash. A DJ excites the crows from a stage above the sign. Photo by Bonnie Fink. 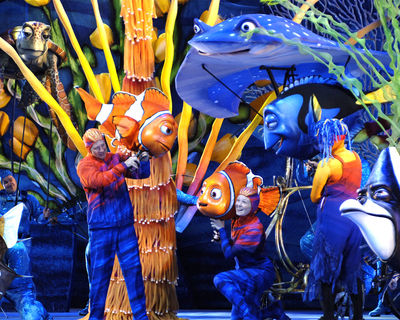 "Finding Nemo — The Musical" features the theatrical puppetry of Michael Curry, who co-created the richly designed puppets seen in the Broadway version of Disney's "The Lion King." Some puppets are larger than life—Crush, the cool sea turtle is nearly the size of a Volkswagen. Image Copyright Walt Disney Studios.

There's a stage show in DinoLand called Finding Nemo – The Musical. This is, of course, a musical production of Finding Nemo using actors with puppets in the style of the original The Lion King on Broadway. The show is a must-see if you're at Animal Kingdom, and especially if you have youngsters with you. There are a couple of reasons you might want to see this show. First, it's an indoor, air-conditioned theater, so it's a few minutes away from the Florida heat. But mostly, like the Festival of the Lion King that shows in the Harambe Theater in Africa, this show is a major production, and could hold its own as a musical in pretty much any town, anywhere.

We have no idea how this ties into the backstory of the rest of DinoLand, and truthfully, we don't really care. The theater is actually on the outskirts of DinoLand on the way to Asia, and we think that it's included in DinoLand only because it has to appear on maps somewhere, so it may as well be DinoLand.

Having said that, we will emphasize that we're not being critical of this production in any way. It stands on its own merits, and like Festival of the Lion King, we consider it a must-see if you visit Disney's Animal Kingdom. 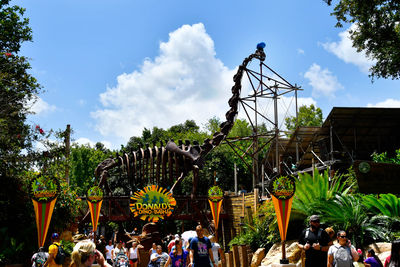 A large brachiosaurus greets guests near the entrance. Photo by Donald Fink.

When you first walk into DinoLand from Discovery Island, your impression may be that it's a cheesy, half-baked attempt at throwing something together. Some people have even been known to turn around and walk out before even seeing more than the first few steps, never getting farther than their first view of Chester and Hester's Dino-Rama! The faded paint, the cracked roadway, and the run-down buildings all contribute to the look, and if you don't understand the backstory, you may not understand just what's going on here.

In knowing the backstory, you can form a new appreciation for what's happening. As you stroll through, you can start to notice little hints of the story in the props, signs, and even the artifacts on the walls of Restaurantosaurus. Once you get past the Dino-Rama! section—which is actually a fun midway experience—you'll find the Dino Institute and Dinosaur, home of the Time Rovers. The ambience changes completely to a professional (mostly) tour company providing a look into the earth's past. Knowing the story, this all makes sense. Without the story, it's confusing.

We think DinoLand is worth a look and completely worth spending time in. It carries the overall conservation message that Animal Kingdom tries to impart on its guests and does it in a way that could have actually evolved in mid-century 1900s in middle America. So, was DinoLand a mistake that snuck by Disney's Imagineering? We don't think so. Rather, it's a full and complete story with lots to do and see while you're here.