Welcome back to another Disney Top 5. We've been exploring the very best that Disney's Hollywood Studios has to offer, and it's time to hit another one of my favorite spots in Walt Disney World. If you've been following my articles here on MousePlanet, you might know that I have a certain affinity for the Muppets. I was born in 1968, right in time for this new thing in children's television known as Sesame Street and believe me, I was right there in front of that old black and white TV in the basement watching, spelling out loud and singing along. Growing up in the 1970s, I was also right there for the golden age of Jim Henson and his Muppets. I was a faithful viewer of The Muppet Show, and clearly remember seeing The Muppet Movie at my local big old theater. As a matter of fact, somewhere on my collectible shelf there's an official "Muppet Show Fan Club" button and if I'm not mistaken I still have the official declaration that came along with it when I joined up. So, yes indeed, the Muppets were my childhood.

It was therefore a sort of poetic justice that my college internship and, subsequently, my first professional job after graduation was working for Jim Henson Productions in New York City. The experience was a dream come true for this fan. It was a brief but exhilarating time with them, and I cherish the moments I spent with that crew of brilliant performers and crew members. I was a kid in a candy shop at times. Watching Jim puppeteer Kermit right there in front of me was kind of like being able to watch Walt Disney draw a picture of Mickey Mouse or Mickey Mantle hit a home run, or Jimi Hendrix light his guitar on fire after a blistering solo. Take your pick. Whatever the pinnacle of fandom may be for you, no matter what the milieu, watching Jim "wiggle the dolly"—a term the& Muppeteers often used to describe their craft—was a highpoint for me for sure.

I've always been very optimistic about the fact that The Walt Disney Company has the reigns of the Muppet legacy. Jim, himself, thought there was no better place for his beloved creations to reside for posterity. Since I'm obviously a major Disney fan, it only makes sense that I would be pleased that two of my worlds can collide while I'm visiting Walt Disney World. Sometimes though, I wish that Disney would do a lot more with Kermit and company beyond the small "land" we're going to talk about today. I could definitely use a dark ride transporting you through scenes from the stable of Henson films all the while listening to that wonderful history of music that's always been associated with the Muppets. How about an entire The Dark Crystal attraction? Am I being too much of a fan to suggest that Labyrinth could use a little attention in the parks? Just imagine how the Imagineers could use their infamous smellitzers with the bog of eternal stench? Wow! That last sentence was just packed with Disney and Muppet geekiness, wasn't it?

Unfortunately, I don't imagine that any of those things are on the horizon anytime soon, but it's very Disney of me to dream isn't it? Until then, if I want my precious Muppets, I must visit this particular corner of Disney's Hollywood Studios. It's a nice dose of Muppets and the recent retheming of Pizza Planet to PizzeRizzo is very encouraging to this eager fan. It's not just about Muppets on Grand Avenue, but as you might imagine, they take up all my Top 5 things to see on Grand Avenue at Disney's Hollywood Studios.

As I said above, the change from Pizza Planet to PizzeRizzo was a welcome one in my eyes. It seems to make sense that this entire courtyard area is themed to the Muppets. "The more Muppets the better," I always say. 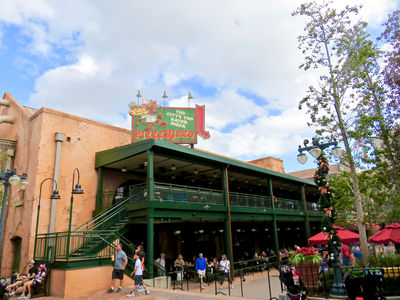 The Muppets-themed PizzeRizzo restaurant has opened in the former Pizza Planet location with a very similar menu. Photo by Alan S. Dalinka.

I can't rave about the pizza here. If you've ordered Disney counter service pizza before, or pretty much anywhere on property, then you've had the pizza here. As a person visiting Florida, it's not that bad, and even hits the spot on occasion. As a New Yorker, it's the pizza that shall not be named. My advice to a Muppet fan is to head in out of the sweltering heat for a cool break, and enjoy spotting the plethora of subtle, but classic, Muppet references.

This is the main gift shop in this area of the park and while you can certainly get your fair share of Mickey and Walt Disney World souvenirs here, the big draw for me is the Muppet merchandise and the Muppet theming inside and out. 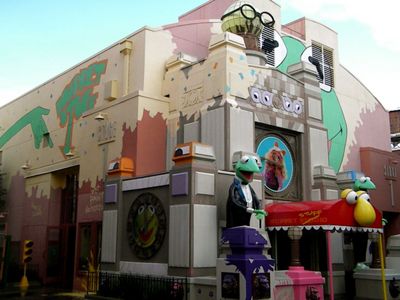 This entrance to Stage 1 makes it very clear Muppet merchandise can be found therein. Photo by J. Jeff Kober.

I've always been a fan of the giant Kermit outside, the Whatnot awning, the Bunsen Honeydew globe way up high, and the various Muppet-ish graffiti on the walls. Inside, look out for plenty of Muppet references and Dr. Teeth and the Electric Mayhem. What more can a Muppet fan ask for in a gift shop? How about looking up and seeing a replica of The Muppet Show dressing room doors? Sure, you could shop at Stage 1, but I'm typically just walking around inside and out spotting all the fun Muppet stuff.

As you enter the Muppet Vision attraction building, be on the lookout for a sign that reads, "Back in 5 minutes. Key is under mat." 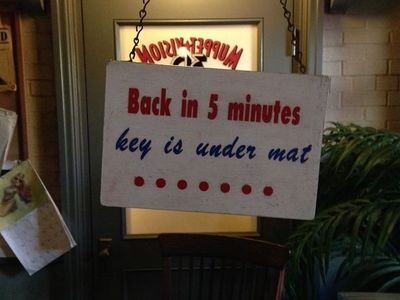 Follow the directions on this sign in the Muppet Vision queue and see what you find. Photo by Chris Barry.

In true Imagineer fashion, there is, in fact, a key under the mat! Lift it up and see for yourself. My kids always loved this little detail.

The Jim Henson Company has historically put Miss Piggy into larger than life costumes and scenarios. The Muppet Courtyard at Disney's Hollywood Studios follows in that great tradition by immortalizing the pig in an over the top statue surrounded by an equally ludicrous fountain right outside the Muppet Vision building. 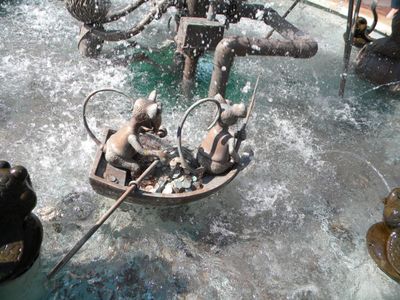 Rizzo and team gathering coins from the fountain in front of Muppet Vision 3-D. Photo by J. Jeff Kober.

I'd have to say that this probably my favorite piece of statuary anywhere on Disney property. I can't help but smile as I walk up to it, and I'm smiling right now just writing about it. Make sure you spend some time checking out the small details included in this classic bit of Disney propping.

Sure, I love the movie itself. It's got the original Muppet performers voicing their characters, including the classic pairing of Jim Henson and Frank Oz along with the late Richard Hunt and Jerry Nelson. While I would love an update to the film, it's still wonderful to hear the original cast the way I remember them from the old days.

It's not the 3-D film that always brings me back as much as the queue area. It's a true goldmine for Muppets fans. The classic Muppet puns are everywhere, on various signs and stenciled on the sides of boxes. One of the ultimate Muppet props, the spaceship Swine Trek from The Muppet Show's Pigs in Space segments hangs from the ceiling. My worlds collide yet again as Kermit can be seen on a poster dressed as Bruce Springsteen circa his Born in the USA days. The visuals are everywhere.

But my favorite thing associated with this attraction building are the painted pipes, which are a classic reference to something legendary in both Muppet and television history. 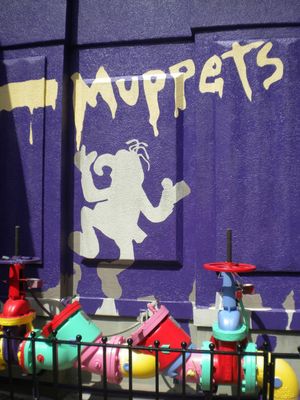 Some of the painted pipes in the Muppet Courtyard area of Disney's hollywood Studios. Photo by Chris Barry.

The story goes that back in 1964, while waiting for hours for their segments to tape on The Jack Paar Show, Jim Henson and Frank Oz along with Don Sahlin and Jerry Juhl got bored and decided to paint and decorate a closet of pipes, transforming them into Muppet-like figures complete with eyes and faces. Despite Jim promising NBC that he would paint over the pipes the next day, that never happened and the pipes sat behind closed doors for years until being rediscovered 16 years later. 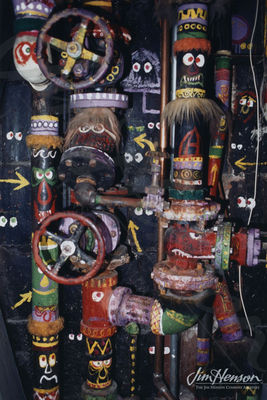 Some of the infamous Muppet pipes located at the NBC Studios in New York's Rockefeller Center. ©The Jim Henson Company.

They've since become a sort of NBC museum piece and will undoubtedly be preserved forever as a part of important television history. The Henson fan in me absolutely adores this reference at Disney's Hollywood Studios, especially since I can't imagine many guests are even aware of them and their reference to the originals in New York. It's the kind of Disney detail that I always tell the uninitiated to look out for, and they help make this a very special section of Walt Disney World to me.

As Star Wars: Galaxy's Edge encroaches on many areas of Hollywood Studios, I've been fearful of the Muppet Courtyard and its many wonderful details. Considering that this area is literally between Star Tours and the new land being built, I've worried that we'll lose the one major Muppet area in a Disney park. However, with the considerable work they put into PizzeRizzo and the opening of the new BaseLine Tap House here on Grand Avenue, I think my beloved Muppets might be safe for now. Now seriously...how about that The Dark Crystal attraction or The Muppet Movie dark ride? I still don't think that's asking for too much. Do you?

Thanks for touring this section of Disney's Hollywood Studios with me. As always, I'd like to hear what you have to say. Click on the link below, let me hear your thoughts and I'll see you next time with another Disney Top 5.