On June 30, the long-anticipated Toy Story Land opened at Disney's Hollywood Studios in Florida. We were there and excited for a couple of reasons: First, we've been to Toy Story Playland at Disneyland Paris, Walt Disney Studios Park, and wanted to compare; second, we wanted to see the level of Imagineering and craftsmanship involved in this new land.

The real prize for us is the new Star Wars Land, Star Wars: Galaxy's Edge, currently under construction right next door. The level of work at Toy Story Land would, in our minds, influence our expectations for Star Wars. After walking through Toy story Land a couple of times, we're happy to report that our expectations for the level of authenticity and realism for Star Wars is exceptionally high. Take a look at what we found: 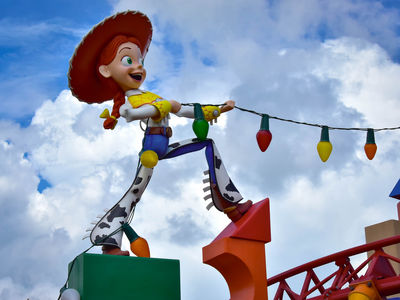 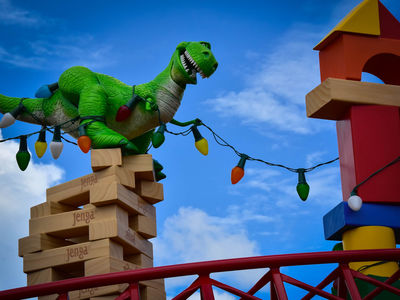 Rex also helps with the Christmas lights in Andy's back yard. Photo by Bonnie Fink. 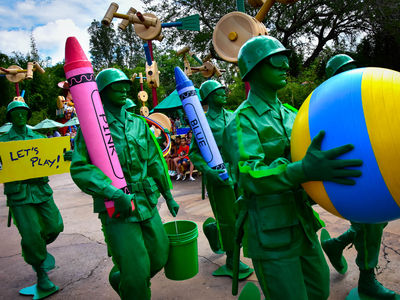 The Green Army Men are some of the few characters at Walt Disney World that actually talk to guests. Well, they not so much talk as shout Army orders, but still, they're vocal. Photo by Bonnie Fink. 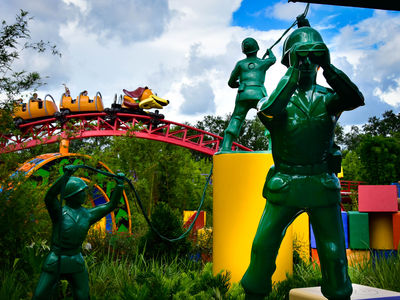 It's not all marching and showmanship. Here, The Green Army Men are setting up a forward operating position, assisting in the installation of the Christmas lights in Andy's back yard. Photo by Bonnie Fink.

Slinky Dog Dash is the new roller coaster at Toy Story Land in Disney's Hollywood Studios. This ride is sleek and modern, and appeals to all ages. Our Alan S. Dalinka described it as being designed to be enjoyable for most kids, but not a "kiddie" ride. It is gentle enough to be appealing to younger riders, but sophisticated enough to appeal to their parents. 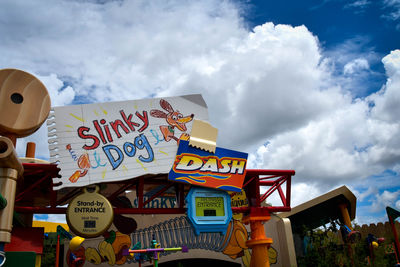 The sign over the entrance is actually a part of a page drawn by Andy when he designed his version of The Dash and Dodge Mega Coaster Play Kit, substituting his Slinky Dog for the coaster cars. You can see parts of the rest of his drawing along with empty toy boxes strewn about as you wander through the queue. Photo by Donald Fink. 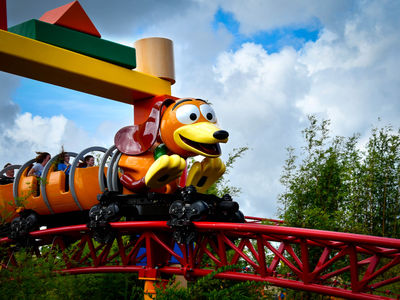 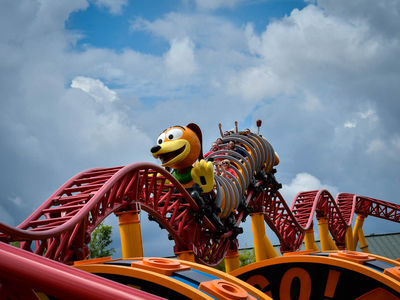 MousePlanet's Alan S. Dalinka rode the Slinky Dog Dash several times during the opening few days of Toy Story Land. He described the "camel humps" as the most fun of the ride. You can see his complete narrative of the ride in the Facebook Video below. Photo by Donald Fink. 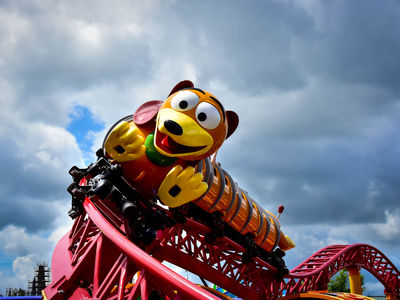 The Slinky Dog Dash rounds the corner after bounding through the camel humps, after it launches from its second launch point. Photo by Bonnie Fink. 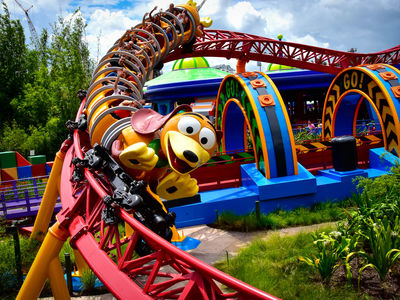 There are several vantage points to observe the Slinky Dog Dash ride up close before getting on. This might be a good thing for parents who want to reassure their kids before riding their first roller coaster. Photo by Bonnie Fink.

Alan S. Dalinka was able to ride the Slinky Dog Dash a couple of times during a pre-opening press event. On one occasion the Disney folks had the car set up to get a narration of the ride as he moved and bumped along the tracks. Here's a quick video of Alan's thoughts as he made his way around the track for the first time. Video courtesy of Disney Studios.

We haven't been on the Slinky Dog Dash ride yet. We were unable to secure Fastpass times, and wait times were exceptionally long, as you might expect. 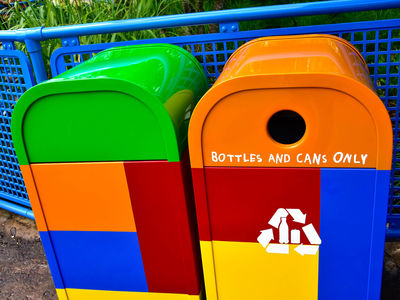 These trash receptacles in Toy Story Land are exceptionally bright and "happy." They almost look like they're powder coated rather than painted. Photo by Bonnie Fink. 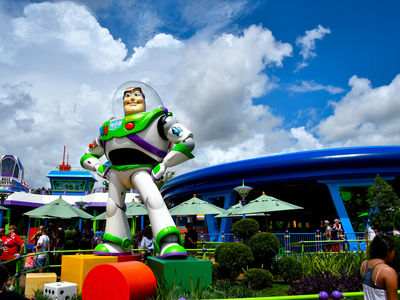 Buzz Lightyear stands as proud as he can get near Alien Swirling Saucers. It's interesting to note that Buzz speaks French in Disneyland Paris. Here, it's just some plain ol' English, and maybe a bit of Spanish mixed in. Photo by Donald Fink.

Alien Swirling Saucers is a great ride for the kids, and is similar to Mater's Junkyard Jamboree at Disney California Adventure. Photo by Bonnie Fink. 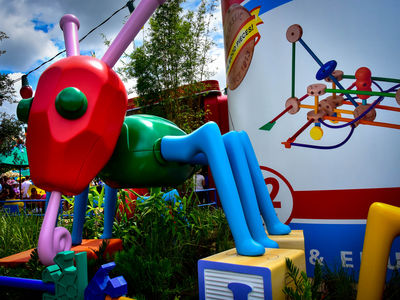 Many of us have spent a great deal of our childhood avoiding Cooties, but if you've ever wondered what a Cootie actually looks like, here it is. Imagine if you're a small toy, trying to avoid Cooties this big. Photo by Bonnie Fink. 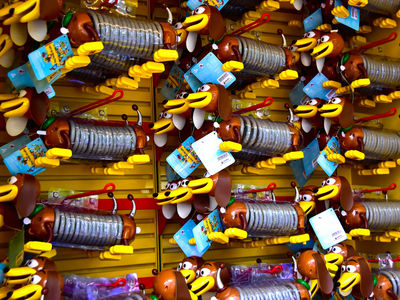 Slinky Dogs have been flying off the shelves during the first few days of Toy Story Land being open. Photo by Bonnie Fink. 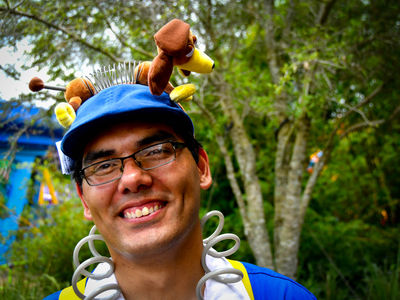 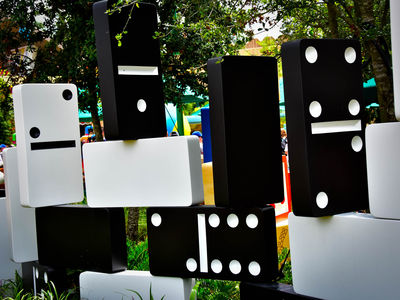 Based on their haphazard arrangement, a small toy might not want to stand too close to these dominoes. Photo by Bonnie Fink.

The only change to Toy Story Mania was a shift to the entrance. Guests now enter the queue from within Toy Story Land. An interesting thing to us was that as you exit the ride, you're not directed through a gift store as you are with many other popular Disney rides. Instead, you walk through an area that looks like a side yard leading to Andy's play area. 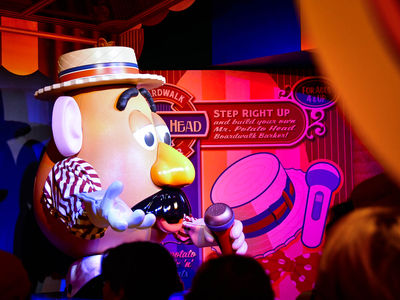 Mr. Potato Head is in the Toy Story Mania queue. This guy is animated with life-like movements, similar to, or as sophisticated as the Na'vi Shaman of Song in Pandora. Photo by Donald Fink. 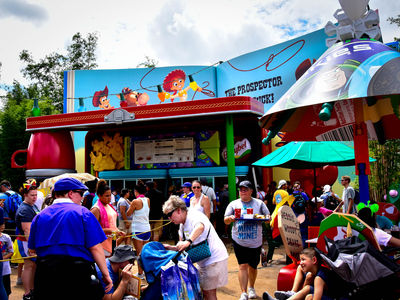 Woody's Lunch Box is the place to grab a bite to eat in Toy Story Land, and was very busy in the first few days after opening. You can grab a Raspberry Lunch Box Tart (pastry filled with raspberry marmalade and coated in strawberry fondant) if you want a quick snack. There's also a BBQ brisket melt sandwich, with sliced smoked brisket, pickles, cheddar cheese, and tangy BBQ sauce if you want something that will stay with you a bit longer. Photo by Bonnie Fink. 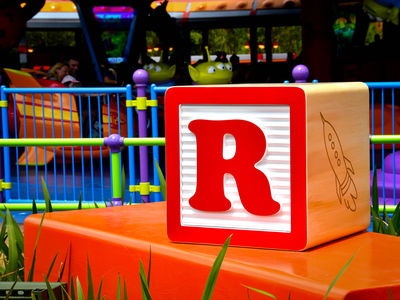 It's just an R, but it could provide hours of entertainment for a kid. As you walk by, ask your kids how many words they know that contain the letter R. Photo by Donald Fink. 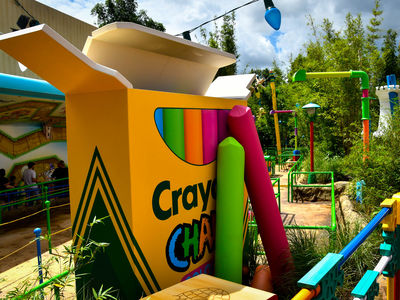 From the vantage point of a small toy, a box of Crayons is pretty big. These Crayons look so lifelike it's hard to imagine how they don't melt in Florida's July heat—must be Disney magic. Photo by Donald Fink. 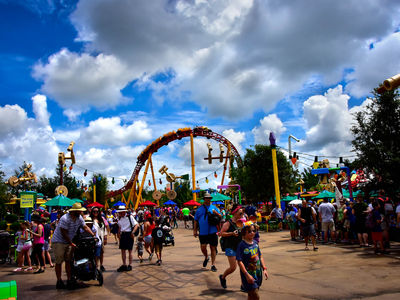 Toy Story Land is a reasonably small area in Disney's Hollywood Studios, but it's a flurry of activity as guests wander about taking in the sights. The idea is that you're viewing Andy's back yard from the perspective of a toy. Photo by Bonnie Fink.

So far, there have been three Toy Story animated films, and Toy Story 4 is currently slated for release in 2019. This film will reportedly center around Woody's quest to rescue Bo Peep. You may remember that Bo Peep was a romantic interest of Woody's, but was absent in Toy Story 3. We can only speculate that she was sold along with other toys and Woody's job in Toy Story 4 is to rescue her.

It's also interesting that, in our walks around Toy Story Land, we found no evidence of Bo Peep. This makes sense if she was indeed sold, since Toy Story Land is Andy's yard. The question is, after Toy Story 4—assuming that Bo Peep is rescued—will she make an appearance here in Toy Story Land? What do you think?

As you can see from the images, this new land isn't just plywood and paint. There was clearly an effort to bring a completely immersive experience to guests as they see the world through Andy's toys, and once again, Disney has done a great job.

Now that we've seen Toy Story Land here in Florida, trying to compare it with Toy Story Playland in Paris is largely unfair to the Paris experience. Sure, they both are based on the same Toy Story movie franchise, but we've got to remember that the Toy Story Playland construction started in late 2009, which is like a century ago in "Disney storytelling technology" years.

Here's a quick video with a few more views from Toy Story Land:

Walking around Toy Story Land at Disney's Hollywood Studios at the Walt Disney World Resort, we captured some of the sights in the first few days since its opening in June, 2018. Video and Stills by Donald and Bonnie Fink, and Disney Studios. Slinky Dog narration by Alan S. Dalinka.