The Lamplight Lounge is supposed to be booked for the next few months but they save room for walk-ins. Even though the parks are crowded for summer holidays there were plenty of seats. At least for those of us who wanted to sit at the bar.

We arrived around 11:45 a.m. and requested "the bar." They took down our name and asked us to wait for just a minute. Within five minutes they ushered us into the upstairs bar. We asked if the downstairs bar was available and our host said "let me ask." We informed him that the upstairs bar would be just fine. There were only two people seated at the bar and when we left it was pretty full but still some seats available. 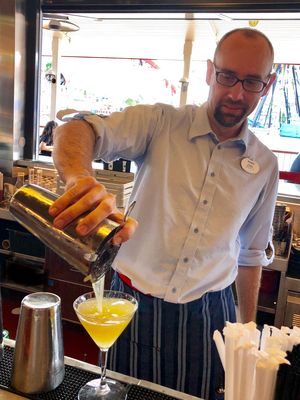 Joel is one of the very friendly and able bar staff at the Lamplight Lounge. Photo by Todd Pickering.

The next time we went was about 4:30 in the afternoon and it was much more crowded at this time. There were two queues upstairs for the outside bar and the downstairs bar that were being managed by a Cast Member. The former was a five minute wait and the latter was a 20 minute wait. The inside lobby is the only place to check in for waiting list and reservations, and there are two people managing that desk. When the desk was free the Cast Member ushered us in and we put our name down for the downstairs bar this time. They took our phone number and said we would receive a text, so we should remain near the restaurant. We received a text within 30 seconds. We were then taken downstairs and the bar was maybe a quarter full at best. Upon leaving it was no more than half full.

Many restaurants do not over book in their first few months but the parks were packed, and the ample seating with the addition of the downstairs bar is a huge improvement for those trying to beat the heat with a quick cocktail. The upstairs bar and adjacent seating serves the appetizer menu only, as they have built a separate kitchen. Downstairs in the main dining area you may enjoy the full menu also at the bar. 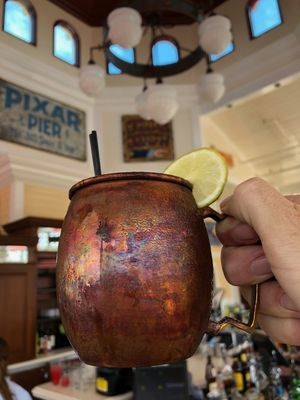 We were treated to two bartenders upstairs and two bartenders downstairs; they were without pretension, which is refreshing in this new world of mixology and a market glutted with so many new products. They were friendly, fun, and most importantly very knowledgeable without being snooty. Whoever did the hiring they deserve many kudos indeed. For the purpose of this article, we tried all drink menu items that are created as part of their house specialty program. The drinks were pricey, ranging from $13.25 to $15.00, which is standard pricing for premium drinks served in big cities (and even catching on in smaller markets) and resorts. Also keep in mind that house specialties use premium liquor, raising the prices. Our first drink was The Over Budget (drinks are named after a lot of movie making terms), which uses Grey Goose vodka, Liquid Alchemist passionfruit puree, ginger beer, agave nectar, and lime. The ginger beer overpowered the passionfruit, leaving this to taste like a Moscow Mule. If you like Grey Goose when ordering vodka be my guest, but as delicious as this was I would just order a Moscow Mule. 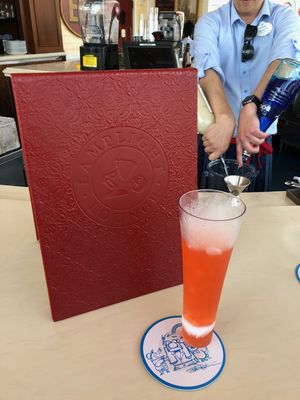 The Server Room Chill is one of two cocktails that bubble up with dry ice. Photo by Todd Pickering.

The Server Room Chill is named after the room where Pixar keeps their super computer. You can imagine how big and important this is, so the room is kept very, very chilly—ergo the name of the drink. The bar has a machine in which they place two glasses at a time, upside down. There is a little screen at the bottom of each plastic glass that catches dry ice that blows up into it. The Server Room Chill contains Plymouth gin, which is a milder, less intense style of gin. It also has Aperol, agave nectar, and ruby red grapefruit juice. It really pulls a great grapefruit flavor, and the gin is a bit lost in it. I would highly recommend this to someone who is interested in branching out into gin. The juice and Aperol keeps it from being too sweet, but the nectar does sweeten it up a bit. It is nicely balanced. 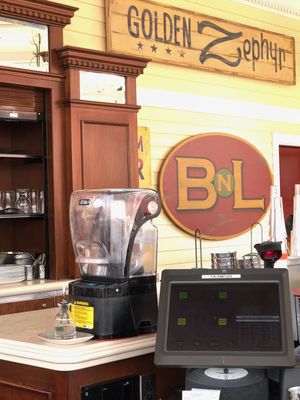 Both bars have an amazing machine that whizzes up dry ice into the bottom of the glass. Photo by Todd Pickering.

They also serve a drink called The Sequel with vodka and rum, and a mocktail called Infinity Fizz with dry ice. Adrienne Vincent-Phoenix tried the Infinity Fizz that is made with Powerade Moutain Berry Blast, apple juice, and cherry pearls. The pearls really bounce and bop in the bubbly beverage, making it great fun to see whisking through the restaurant. We decided it was very sweet. This is definitely a drink that will go over well with the younger patrons at the restaurant. 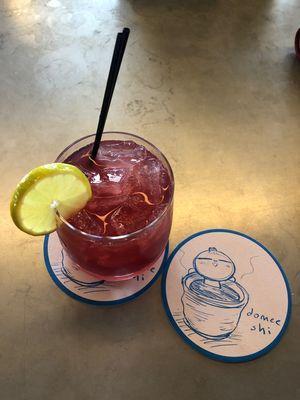 Final with a Fix is made with Greenbar IXÁ tequila and St. George raspberry liqueur. Photo by Todd Pickering.

Final with a Fix is made with an LA brand called Greenbar IXÁ tequila (the bar also carries their gin and of course the tequila is made in Mexico for Greenbar). All of their liquor is organic and for every bottle they sell they plant a tree. This drink is also made with St. George raspberry liqueur (out of Alameda, which is very near Pixar's home in Emeryville), Cointreau, fresh lime juice, agave nectar, and a dash of Del Maguey Vida mezcal. If you like a strawberry margarita this drink is for you. The raspberry liqueur is really fresh and bursting with juicy raspberry flavor. The mist of mezcal can really be tasted. It is quite sweet but definitely a more refined version of a margarita than you would find over at Pacific Wharf out of a machine. 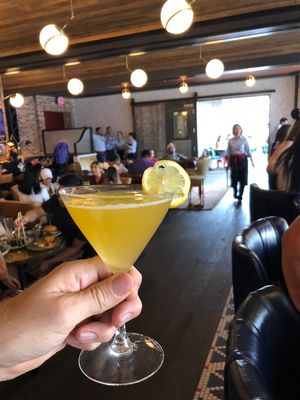 Six Tentacles is made with Kikori Japanese whiskey and Yuzuri yuzu liqueur. Photo by Todd Pickering.

Six Tentacles (named after Monsters Inc.) is made with Kikori Japanese whiskey, Yuzuri yuzu liqueur, Liquid Alchemeist passionfruit, fresh lime juice, and agave nectar. There are many different types and styles of Japanese whiskies, and this one is a milder style. With the addition of three sweet items this cocktail definitely is for those with a sweet tooth. Unlike the Over Budget you can really taste the passionfruit, and the addition of the acidic yuzu blends beautifully; it's a nicely balanced cocktail. 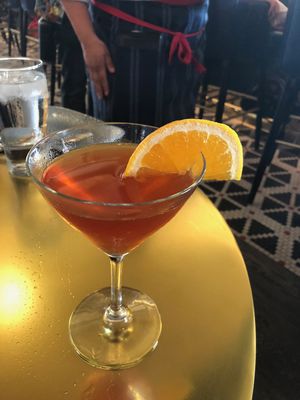 The Park Avenue is made with Redemption rye whiskey, Aperol, Dolin Rouge vermouth, and Bitter Truth chocolate bitters. This drink is a riff on a Manhattan, but the addition of the Aperol and chocolate bitters truly changes the entire profile of the drink. The chocolate is pronounced, but blends beautifully with the flavors making this one of the hits on the menu. Unlike The Over Budget, which tastes too similar to a Moscow Mule, this truly stands out as a specialty libation. 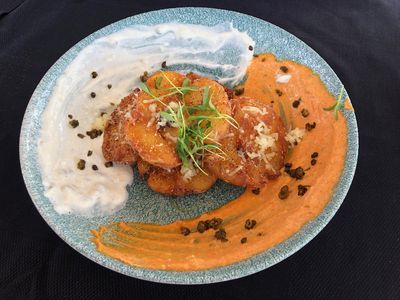 Try an appetizer to allow you to order that second drink. The potato skins are fantastic. Photo by Todd Pickering.

I would be remiss not to mention the attention to detail like the sketches on the coasters of different Pixar films, the fantastic decor, and the truly delicious gastro pub style food like the creamy and tangy deviled eggs or the rich "potato skins" made with Yukon Gold potatoes. Lamplight Lounge has added another great choice to Disney California Adventure to rest and enjoy a drink. Truly a highlight of any tour of the park.