Welcome back to another Disney Top 5. I've just returned from yet another amazing trip to Walt Disney World. A huge group of us went down to celebrate my 50th birthday. I can't even begin to recount just how magical it was, but I will try in some future articles. In the meantime, I needed to get back on track with my land by land tour of the Walt Disney World theme parks. We've gone on quite a journey touring through the Magic Kingdom, Epcot, Animal Kingdom, and most recently, Disney's Hollywood Studios. We left off last time with the Animation Courtyard, a corner of the park that most of you out there seemed to feel has lost its way over the years. Despite still loving The Voyage of the Little Mermaid and being as happy as I can be in the Star Wars Launch Bay, I do happen to agree with that sentiment. I'm always hopeful, however, that as the park continues to morph, this area will receive a makeover of sorts. Leaving the courtyard behind, it's time to head down to what's probably the most popular section of the Studios, Sunset Boulevard.

Sunset Boulevard was the first major expansion to the park. It opened in 1994, five years after opening day in 1989, and was a continuation of Disney's homage to the Hollywood that "never was—and always will be." Named after one of the most famous thoroughfares in Hollywood lore, Sunset Boulevard is a beautifully themed street offering a multitude of shopping, dining, and attraction options, and has become a huge part of anyone's visit to Walt Disney World. For many, it's hard to imagine a trip to Disney without being dazzled by Fantasmic or dropping in on the Tower of Terror. There are two headlining attractions and two major shows in this corner of the park. One of them, Fantasmic, has been described by a leading Walt Disney World guide book as, "worth the price of admission alone." I'd have to agree with that, and while I've made no bones about Hollywood Studios being my least favorite of the Walt Disney World parks, Sunset Boulevard is one of Disney's best executions of theme, design, and place-making.

This sign is one of those classic little pieces of Disney detailing that makes the parks and resorts so special. It's a small thing, but I love the inclusion of the Route 66 sign and the stack of vintage suitcases surrounding it. 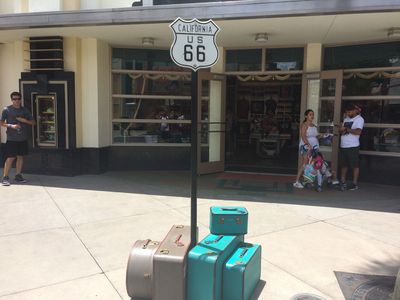 Get your kicks on Route 66 on Sunset Boulevard in Disney's Hollywood Studios. Photo by Chris Barry.

We all know the mystic appeal that Route 66 has in this country, and it's very cool that the Imagineers decided to throw the sign onto Sunset Boulevard—which technically is a piece of the famed route itself. Stop and take a photo the next time you're there.

Why build just another gift shop when you can place one inside a replica of a building steeped in both Hollywood and Disney history? The Imagineers took the high road when designing Sunset Boulevard's shopping district by paying tribute to actual architecture from Hollywood. You Disneyland fans have a fairly full-blown version in Disney California Adventure. In Walt Disney World, the Carthay Circle Theatre houses the Once Upon a Time gift shop. I'm quite sure most guests don't realize that Walt Disney's first full length animated feature, Snow White and the Seven Dwarfs, had its premiere at the Carthay Circle in 1937. The clues are there. There's a Snow White movie poster in the window. There's also a fairly fleshed-out facade of her cottage in another window. Head inside to the main register and see photographs of the actual premier itself. 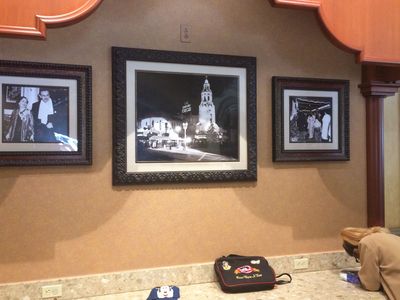 Try and catch an empty register and you'll get a great view of some classic photos from the heyday of the actual Carthay Circle. Photo by Chris Barry.

Fantasia also premiered in the Carthay Circle with an incredibly elaborate sound system installed just for Walt Disney's masterpiece. Next time you head down Sunset Boulevard, stop at the Once Upon a Time shop before you hit the attractions and shows at the end of the street and check out these wonderful references to Disney history.

3 – Beauty and the Beast - Live on Stage

When we talked about the Animation Courtyard and Voyage of the Little Mermaid, I owned up to being a sucker for Ariel and her songs. I'd say I'm an even bigger sucker for the music of Beauty and the Beast. Personally, I think it's the most impressive masterpiece from the second golden age of Disney animation that also brought us films like The Lion King and Aladdin. The music of Beauty and the Beast gets to me, and it's no wonder that I enjoy seeing them performed live. 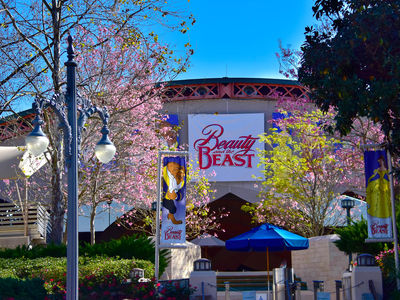 The Theatre of the Stars located along Sunset Boulevard, is the current home of a stage production of Beauty and the Beast, which shows several times a day. Photo by Bonnie Fink.

After all, who doesn't want to hear "Be Our Guest" at full volume over a theater-quality sound system? It's one of Disney's best collections of songs performed in one of their best live shows in any of the Disney parks. Don't miss it.

2 – The Twilight Zone Tower of Terror

While waiting in the queue for the Tower of Terror last week, I struck up a conversation with a rabid fan next to me who referred to this attraction as, "the last great Disney attraction, before everything became about projection." While, I don't necessarily agree with that assessment, I do see his point about the significance of this particular attraction. The Tower of Terror is one of Disney's all-time best. It's a masterpiece of design, combining elaborate theming, incredible props and details, special effects, and impressive ride technology. 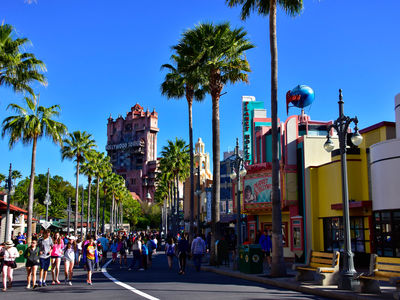 Turning down Sunset Boulevard from Hollywood Boulevard you can't miss the looming Hollywood Tower Hotel, the home of the Twilight Zone Tower of Terror. Photo by Bonnie Fink.

I remember Free Fall at Six Flags Great Adventure in nearby New Jersey. It was literally a tower that had a similar "elevator" style ride car. They brought us up fast and then essentially just pushed us out and down. It was a thrill, and that sense of free fall was a jarring blast of energy. The Imagineers took that simple ride concept and to quote Spinal Tap, "turned it up to 11." The details are second to none, the special effects are always impressive, and the random drop sequence makes it a different thrill each time you ride. It's amazing.

Fantasmic just might be, as I previously quoted, "worth the price of admission alone." I hesitate to even print that because I don't want Disney getting any ideas of ever charging separate admission for this one-of-a-kind show. The point is, Fantasmic is extremely worth the effort—and it can be an effort. The park practically empties into the Hollywood Hills theater during Fantasmic. There are 6,900 seats, and room for another 3,000 people standing. Think about that for a moment. That's just shy of 10,000 people potentially enjoying Fantasmic each and every night. It's a staggering number for any theme park. 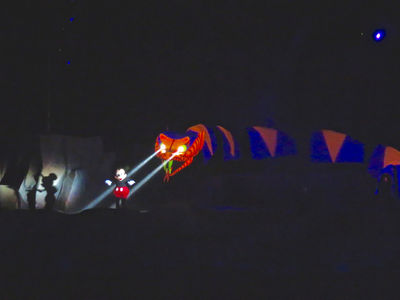 The show has everything; fireworks, projections, lasers, flames, water screens, music, floats, Disney characters, giant fire breathing villains. I challenge you to not be impressed as Mickey battles the forces of evil and triumphs. I also challenge you not to get emotional when Steamboat Willie appears and ferries his ship full of Disney characters around the lagoon. It's not just one of the best Disney shows I've ever seen, it's one of the best shows of any kind I've ever seen... period.

The funny thing about this last trip was we were so jam-packed with things to do and see that I didn't even get to see Beauty and the Beast or Fantasmic! Unthinkable for me really, but we had 23 of us traveling together and it wasn't always easy to fit everything in. I did get on the Tower of Terror twice and one of those times was actually the first time for my daughter and my wife. They were pretty blown away by this classic attraction, and it was great to experience it with a handful of first-timers to see their reactions. The pictures and ride video from Photpass are worth their weight in gold. All in all, despite missing out on two of Sunset Boulevard's major attractions on this trip, I did thoroughly enjoy my time in the Hollywood Tower Hotel and meandering my way down the street, popping in and out of shops and admiring the details.

I can pretty much guarantee that many of you out there are saying, "What, no Rock 'n' Roller Coaster?" Yes, that's right. I listed a Top 5 of Sunset Boulevard and chose to include a street sign instead of the famed Rock 'n' Roller Coaster. I like it. It's a great coaster. The added dimension of being in the dark makes it an even cooler coaster. I just don't really get on it that much.

No one in my family wants to go upside down on a coaster. I don't really mind inversions, but I'd rather go on a killer coaster like Everest that doesn't need to go upside down to thrill me. Plus, the wait is always huge. Don't get me wrong. If you're a coaster fan, especially the looping variety, it's as good as they get, but it just doesn't make my boat float. They could knock it down and build something else there and I probably wouldn't complain.

They did an awesome job with Sunset Boulevard. Considering the park itself is in such a state of upheaval, it feels like this is an area that will remain intact for some time. The attractions and shows are immensely popular. It still looks and feels fresh. I don't think I've ever heard an Internet message board rant about Sunset Boulevard needing an update or anything like that. It seems to be holding its own. It continues the original vision of the park and I think people respect that. Make sure to spend some good quality time on Sunset Boulevard on your next trip to the Studios. I'm sure you won't be disappointed either.

As always, I'd like to hear what you have to say. Click on the link below. Let me hear your thoughts about my Sunset Boulevard picks, and I'll see you next time as we wrap up our tour of Disney's Hollywood Studios with the latest addition, Toy Story Land.