The Star Wars Cantina will Become a Reality in Galaxy's Edge

Everyone remembers the cantina from Star Wars. It was one of the most popular scenes from the original film because it featured a scene familiar to movie-goers: a gathering of diverse peoples huddled in one place for the purpose of drinking, making shady deals, and catching the latest live entertainment. Obi-Wan Kenobi said to Luke Skywalker, "This place can be a little rough," and within a couple minutes Kenobi himself cuts off a cantina patron's arm. Rough indeed should that crazy old wizard show up. Hopefully things don't get that violent when we show up at the non-fictional Cantina as part of Galaxy's Edge in 2019.

The fictional cantina made us feel at home in a weird way. It's a dark dive with a bristly bartender surrounded by wasted patrons, some of them regulars, a couple people arguing on one side while a card game takes place on another. Then there are some creatures smoking on a hooka (or chewing on a screwdriver, maybe some drinking screwdrivers) who just want to listen to the band. In an uncomfortable moment the bartender shoos away Luke's droids saying, "We don't serve their kind here." We've seen that on Earth, too—the exclusion of certain citizens from fear or hatred, racism, whatever it is, in spite of their innocence. That gets a bit real to us for a moment. The droids, 3PO and R2 quietly leave, while those who are allowed into the joint start fights, brandish laser swords, and shoot first without asking questions later (although they pay for any mess they make). It ends when the law enforcement, the Stormtroopers, show up after the violence and can't do anything because they didn't see it. It's a lot of action to take in within a short time but it really showed the audience that this galaxy is a bit like ours and has just as big of a seedy underbelly as our own cities have. In the coming park, it will perhaps have the feeling of a place of "scum and villainy," but without any real danger.

When it came to designing Galaxy's Edge, including a cantina was a foregone conclusion. I talked about the possible food and drink in such a place last month. We hoped there would be a cantina and our speculation was relieved when the first images of the park's conceptual drawings came to light and indeed a cantina was present. It is finally good to get some, albeit few, details about the cantina that we can one day visit and depart from alive. Disney blogged a few bits of information about it and we're getting a taste of what the experience will be like.

Pleasant Hive of Fun and Villainy

The description in Disney's blog cannot tell us how the atmosphere will actually feel; will it be dank and dusty? Will it feel welcoming or threatening? Just how many costumed character aliens will be hanging around? Can we jump in on that game of Sabacc in the corner booth with Hammerhead? Will it be just a re-themed Cosmic Ray's café? I'm always worried about waiting in lines so will there be reservations like Be Our Guest? Seems to me it would be hard to keep the theme and immersion happening when I'm in line with all these folks from that darn Milky Way galaxy.

The cantina here has a name, Oga's, named after its owner and operator (and bartender?). Oga Garra is the establishment's, "intriguing alien proprietor." It's a good simple and easy-to-pronounce name—maybe too simple a name in the Star Wars realm? Let's just keep it simple regardless. She runs the place much like Maz Kanata runs her "watering hole" on Takodana. With Oga's name in the title, it gives her cantina a personality where she "tries to keep its unruly patrons in check." She sounds like a tough character—guests won't mess with her. To run a place like this you'd have to be resilient so I believe her name will invoke an aura about it which will give the costumed character some substance.

When this cantina was first announced last month, most of the headlines that followed on the web tended to focus on the presence of alcohol. "Disneyland will finally serve booze!" read most of the clickbait. It makes it read like some old timey forgotten pastoral way of life is crumbling away because of this god-forsaken Star Wars thing coming in and messing up Walt's vision. Psshhaw! The blog post said there would be, "libations for adults," and that seemed to shake the web and made columnists drum up something shocking for readers, inducing visions of First Order pilots dropping parachuted crates of Bud over Black Spire Outpost. Alcohol is not the point. The point is the theme.

With the Star Wars theme in place, we will be able to peruse an otherwordly menu that could challenge us to try new things and see what, by word of mouth, gets to become the thing to order at Oga's Cantina. "Have you tried the pink and green soda, it's appealing, don't believe me? Ask the twi'lek!" (Intentionally terrible slant rhyme…) Scott Trowbridge (Portfolio Creative Executive, Walt Disney Imagineering) replied to a comment on the blog post that the drinks (non-alcohol- and alcohol-based) will be "creatively-themed." Not just themed, mind you, but creatively themed. Even he was trying to get across the point that it isn’t about the liquor, it’s about the immersive experience. Such drinks will get people talking, not sloshing, especially considering the drinks won't come in cheap six-packs. It's simply intended to be fun.

Getting the Band Together?

So, what's the cantina without a little music? We recognize that silly tune from the original movie and that Bith Band is as ubiquitous to the film's cantina as its other alien patrons. George Lucas discussed that music with composer John Williams asking him to "imagine several creatures in a future century finding some 30s Benny Goodman swing band music in a time capsule or under a rock someplace… how they might attempt to interpret it." Lucas wanted to be sure the place was familiar and alien at the same time. Adding live music was a great touch. Are we going to see such a band play live at Oga's? Even if it's animatronics?

Well, we're not sure yet but Disney's blog post mentions that there is a director of entertainment at the place. That director is none other than RX-24, "Rex," the original pilot from the first version of the Star Tours attraction. No doubt he was probably fired from his job since he could never get guests to Endor on the ride. Due to this track record, I expect things for our beloved host not to go as planned at the Cantina either. It will be nice to see a little Disney contribution to the Star Wars world be repurposed for the theme park. Most fans are already asking if Paul Reubens will again provide the droid's voice and mannerisms. No official word on that so time will tell. I'd welcome that, certainly, not just to preserve some continuity (if that's even a thing here) but because he's funny and him as a DJ in a Star Wars bar would be hilarious. Here's hoping that does happen. At the very least, Rex will spin that original cantina tune more than once a day I'm sure.

Speaking of music, there is a rumor that John Williams himself may "score" Galaxy's Edge. The rumor also includes Michael Giacchino as a contributor as well. Giacchino scored Rogue One and the current Star Tours attraction. If these rumors are true then consider me happy as an Ewok in a tree with a blaster. Music from all the Disney parks is something of an obsession with me. I love listening to the music while just walking down Main Street USA or finding my way through Animal Kingdom. That music adds so much to your emotion and to the theme of the park itself.

I couldn't imagine anyone better for the job of adding music to Galaxy's Edge than John Williams and Michael Giacchino. It might even be a welcome challenge to them to create music that not only would enhance the story of the Millennium Falcon and escape-the-First-Order (can we get a name for these yet, Disney?) attractions, but also set the mood for the different areas of Black Spire. There would be music at the entrance to make you feel the beginning of a great new journey. Then music would keep you moving down the streets and that feeling of taking it all in. The shops and corners would have music to just make you feel the wonder of the place, make you want to explore and discover new things. 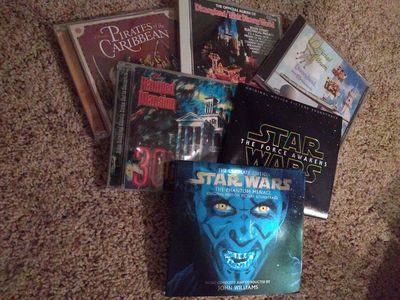 Disney Park CDs along with Star Wars CDs in my collection. A Galaxy's Edge park CD would be a welcome addition. Photo by Todd King.

Music plays such an important role in the parks for enhancing the theme but psychologically it can help keep the peace and aid in crowd control. The music from the parks, more than anything else for me, is what always brings me back to the parks in my daydreams. It is why I try to grab as many of the park exclusive CDs I can get. Since I can't visit the parks everyday (I envy those who can), I can pop in one of the park CDs and it transports my mind's eye to the Magic Kingdom, to Epcot, and to the rides instantly. The orchestrations of John Williams is already some of the most iconic pieces in modern music and if he were to bring his genius to Galaxy's Edge, it would be nothing short of miraculous. George Lucas said that sound and music was half of the cinematic experience. The score by Williams elevated everything about Star Wars and now, his involvement in the park, should it happen, would have an equally profound effect. With all the work the imagineers are doing on the park, I'm certain that the ride soundtracks and the ambient music are not being overlooked and it will be a great part of the experience no matter who Disney finds qualified to create it. But if it is John Williams, then we will truly be in for an abundance of enchantment. And if they make any CDs of Galaxy's Edge music, it will be the first thing I buy there, even before any adult libations.