All Aboard the Grand Circle Tour

I made my reservations as soon as I could, which was 30 days prior to my chosen date. (Guests can call 714-781-TOUR to make reservations). The cost is $85 per person regardless of age, and, as an Annual Passport holder, I received 15% off the price (the cost is in addition to any park entrance fee; Disney Visa cardholders get the same discount). Guests younger than 18 must be with an adult during the tour. Walk-up reservations are accepted as there is usually space available. The walking tour party is maybe 20 guests or less.

My best friend and I arrived at Disneyland Tour Gardens kiosk (next to Main Street U.S.A.'s City Hall) 15 minutes prior to the tour kick-off time. (Remember to bring your ID and confirmation number given upon making reservations). A cast member welcomed us and bid us to sit at tables to wait. While standing by, guests were given a special treat — a decorative donut for some quick energy before our 2-1/2 hour walking excursion. (If guests need a gluten-free option, fruit is available). 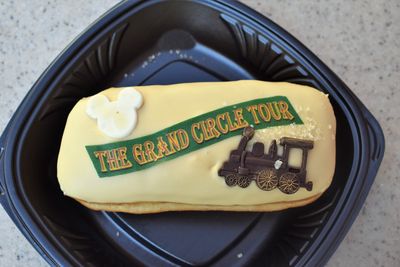 Although this pastry may seem too aesthetically pleasing to the eat, I managed. Photo by Lisa Stiglic.

Once the group passengers arrived, we were ready to board the train tour. Our conductor for the day gave us audio components for listening purposes. We began our trip on Main Street U.S.A. with a bit of Walt Disney backstory and how his love of trains eventually filtered into his first theme park. As a youth, he engrossed himself in the train world while working as a "news butcher" selling cigarettes and snacks to passengers boarding and disembarking the trains. He hung around enough to learn from willing engineers to drive the steam engines.

Our first stop was at Disneyana and the Disney Gallery, which is currently housing a train exhibit in the lobby adjacent to The Disneyland Story Presents Great Moments with Mr. Lincoln. This exhibit is a great starting point to learn about the train influence inside Disneyland regardless if you take the walking tour or not.

The first two-thirds portion of the tour consisted of historical information and a few audio tracks of Walt Disney himself talking about his love for trains. It was a terrific experience listening to him joyfully recall the Carolwood Pacific Railroad. This was his miniature working model installed in his backyard home complete with a steam engine named Lilly Belle, after Walt's wife Lillian Disney. 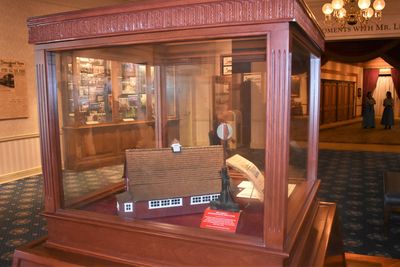 Walt has always said Disneyland "all started with a mouse." If you backtrack prior to Mickey Mouse's 1928 film debut, you'll find that Walt's train enthusiasm actually played a part of Disneyland's conception, too. Take in the fact that Mickey was conceptualized on a train ride and go from there. Walt surrounded himself with other train aficionados including a few of his prominent animators including Ward Kimball and Ollie Johnston who helped influence his Carolwood Pacific Railroad. I'm not a Disney historian like fellow MousePlanet contributor Jim Korkis, so I won't go into an in-depth article about Walt's life and his love of trains. But, I did get from the tour a quick peek into how much of Walt's railway love really is embedded in Disneyland lore.

The original track installed around Disneyland Park was a mile-and-a-half, roughly a six-minute ride. The cars were originally slatted so seats were added in 1959 for a more comfortable guest experience. Over the years, a few more alterations have contributed to the Disneyland Railroad. The two dioramas — The Grand Canyon and Primeval World — were added in 1958 and 1966 respectively. And, in 2016, the railroad went through a huge overhaul to make way for the newest land — Star Wars: Galaxy's Edge. The track was shortened and a few special effects added to the two existing dioramas.

READY TO RIDE THE RAILS

Our group seemed to enjoy the audio portion of the tour, learning about Disneyland's Railway history, but like me, most were eager to get to the tour's highlight — riding the special VIP coach car, the Lilly Belle. This car is the last remaining car from Disneyland's opening day. Lillian Disney herself helped design and decorate the car when it was decided the coach would be a VIP destination. Few have the opportunity to board the car so of course our tour group had cameras in hand ready to climb aboard. 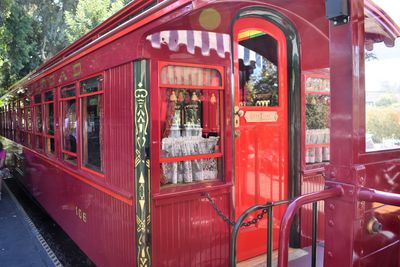 Stepping inside the Lilly Belle is like stepping back into a long-forgotten era in time. Photo by Lisa Stiglic. 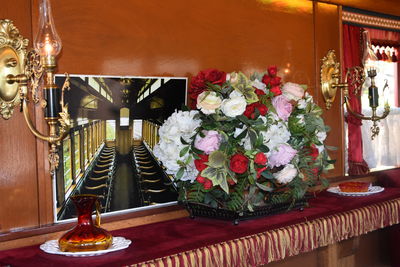 Lillian Disney's personal touches are reflected throughout the decor. Photo by Lisa Stiglic.

While we rode the full-circle around Disneyland Park, our host narrated the history of the Lilly Belle and the engines of the Park. Currently, five engines are housed at Disneyland Park — Ernest S. Marsh, E.P. Ripley, C.K. Holliday, Fred Gurley, and Ward Kimball. All but Kimball were past executives of Atchison, Topeka, and/or Sante Fe Railways. Disney trivia enthusiasts will be thrilled to know Jiminy Cricket is embellished on Kimball's engine; Kimball, of course, being the cricket's animator. 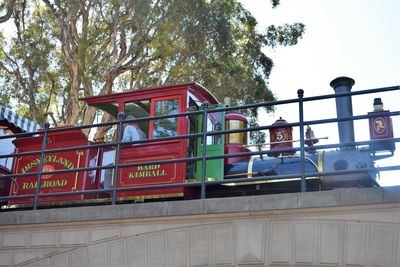 Once we disembarked at Main Street Station, we returned to our starting point and returned the audio components. At the conclusion, we were given a few collectible pieces to take with us on our next travels. 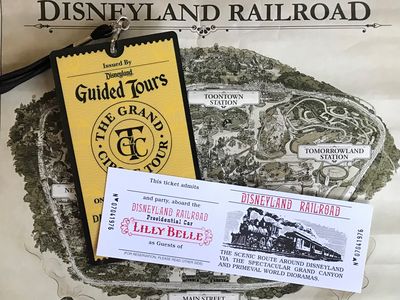 Overall, I found the Grand Circle Tour informative and, of course, the highlight was riding aboard the Lilly Belle VIP car. But, I'm not sure I could justify spending the fee for this particular tour if I wasn't so excited to ride the VIP coach. As aforementioned, the exhibit offers a glimpse into the Disneyland Park train history as does the Main Street Station itself. Stop by the locations for historical artifacts and collectibles pertaining to the Disneyland Railway system.

There are several other tours from which to choose to get more for your money. I highly recommend either the "Walk in Walt's Disneyland Footsteps" Guided Tour or Holidays at the Disneyland Resort walking tour. Both offer a bit more than the Grand Circle Tour. Call reservations at 714-781-8687 for more information.