Stan Lee died Monday November 12, 2018, at the age of 95. The real story is not that another celebrity died, but that he once lived and while he was alive he brought joy and inspiration to generations of dreamers.

While he is best remembered for co-creating some of the most iconic comic book characters for Marvel Comics over the decades, he also had some strong Disney connections. 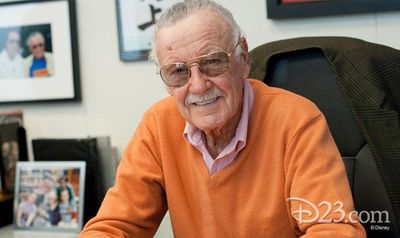 Stan Lee, who will have a cameo in the upcoming Wreck-It Ralph sequel, became a Disney Legend in 2017.

He was born December 1922, a few weeks before Walt Disney had turned 21 earlier that same month, and roughly one year before Walt would start the Disney Brothers Studio and the Alice Comedies series.

In the upcoming animated feature Ralph Breaks the Internet (2018), Lee will have an animated cameo where he is almost knocked down by Vanellope von Schweetz as she weaves her way through the hallways of the Oh My Disney website in order to avoid some Star Wars storm troopers giving chase.

"Stan Lee was as extraordinary as the characters he created. A super hero in his own right to Marvel fans around the world, Stan had the power to inspire, to entertain, and to connect. The scale of his imagination was only exceeded by the size of his heart," said Bob Iger, Chairman and CEO, The Walt Disney Company in tribute to Lee on the announcement of his passing.

Lee was awarded the Disney Legends honor in July 2017 at the D23 Expo.

Disney acquired Marvel in 2009 for roughly $4 billion and so there was some concern that giving Lee and co-creator Jack Kirby awards did not honor the past legacy of the company and individuals "who have truly made an indelible mark on the history of The Walt Disney Company" but was just acknowledging the financially successful film franchise that started before Disney purchased it.

However that same year Disney Legend awards went to Star Wars performers Mark Hamill and Carrie Fisher and Star Wars was also a recently acquired franchise in 2012 for roughly $4 billion.

In his acceptance speech for the Disney Legends award, Lee stated:

"I'll go back a few years to a kid around 8 or 10 who loved to read everything he could get his hands on. In those days, he read the Hardy Boys, Tarzan, Sherlock Holmes…little books he could buy inexpensively.

"One day in a bookstore, he saw a book that was an expensive book. It was what they would have called a coffee table book. To him, it was called The Art of Walt Disney (by Robert D. Field 1942 which would actually have made Lee almost nineteen years old but facts never stopped Lee from telling a good story).

"I was that boy and I couldn't afford the book and it drove me crazy. I wanted that book so badly. I saved my pennies and after a few months I bought The Art of Walt Disney. I loved that book so. I loved Walt Disney so.

"To me, he was more than a man. He was an inspiration, something to reach for to be like him. And to think that today I'm standing here in the house that Disney built and now we are talking about all the things of Disney's.

"It is so thrilling. I can't tell you. I thank you all and I thank you, Bob [Iger] for having me and, of course, I can't leave without saying 'Excelsior!'"

Stan Lee was never shy about giving interviews so when the Disney Family Museum asked him for some comments about Walt Disney in fall 2011, Lee was willing to share the following:

"When I was a young teenager, Walt Disney was my idol. As a kid, the first expensive book I ever bought was a big, beautiful, hard cover, coffee-table book called The Art of Walt Disney. I've had it and treasured it for years.

"Attempting to emulate Walt Disney, I always tried to remain true to whatever creative visions I might have had, even if others thought they weren't practical or doable.

"I think Disney's influence is as pervasive now as it ever was. He was the greatest exponent of 'family entertainment' and, as far as I'm concerned, that's still the greatest and most laudable type of entertainment.

"His early, full-length animated cartoons…I'll never forget them…also, those great TV nature shows which were as thrilling as any of today's superhero shows.

"I guess my favorite (Disney comic books) is really everyone's favorite – the great Carl Barks and his renditions of Donald Duck.

"I feel that Walt Disney was always ahead of the crowd, creatively. He was an innovator and an artistic pioneer. Starting with his full-length animated classics such as Snow White, Dumbo, Pinocchio and the unforgettable Fantasia, and songs that are still remembered and universally loved today, and his fabulous nature series and the forming of his Mickey Mouse Club and his creation of something as fantastic as Disneyland…

"He was a dreamer who managed to bring his dreams to life."

Stan Lee did cameos in many of the Marvel superhero movies.

"I don't consider them cameos anymore," laughed Lee last year. "I consider them supporting roles." He even playfully lobbied that the Academy Awards should create a category for Best Cameo.

His very first on camera cameo was as the foreman in the trial of Bruce Banner in the made-for-television movie The Trial of the Incredible Hulk (1989).

That same year he made a live-action cameo on the animated Muppet Babies series (Episode 606: Comic Capers) where Baby Rowlf dresses up as "Spider-Dog" and is helped by the real Spider-man.

Rowlf erratically shoots webbing that gets on the hand of a Lee while he is sitting at a drawing board and he yells "Hey, you kids! Don't you know there's only one Spider-Man?"

As his health declined, Lee made more and more animated cameos like Fred's father in Big Hero 6 (2014) and an appearance in Spider-Man: Into the Spider-Verse. His appearances in the recent live action films Infinity War, Ant-Man and the Wasp, and next year's Avengers 4 were all filmed on the same day in Atlanta, Ga., in order to limit his travel.

This last summer, he even appeared in the animated feature Teen Titans Go! To the Movies. "I don't care if it's a DC movie. I love cameos! Excelsior!" an animated Lee cries out while speeding around the Warner Bros. backlot with the teen superheroes.

"Few people can create the kind of characters who have that kind of global impact," said Spawn and Venom creator Todd McFarlane. "The only other person I can think of is Walt Disney. Just as Disney's impact continues to grow and expand, I think we're going to see Stan's legacy grow even bigger."

"I get that he created all these characters but Stan's true superpower was the way he interacted with his fans," he said. "He understood that responsibility and he never treated being famous as a nuisance. He got a kick out of it."