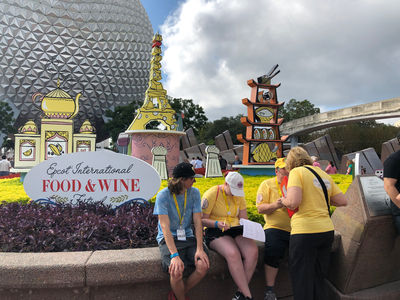 Puffy clouds dot the sky during game day on the final weekend of Epcot's Food and Wine Festival. Photo by Stephanie Wien.

Fifty-six teams took part in MouseAdventure Remix on Saturday, November 10 at Epcot, presented by Third Gate Games with media sponsor MousePlanet. The weather was warm and humid, with partly cloudy skies and occasional refreshing breezes. Teams gathered outside Epcot shortly after opening to kick off the ninth Walt Disney World MouseAdventure event, separating into two groups to listen to the rules presentation. Shortly before 10 a.m., teams collected their packets from either the World Showcase or Future World side of the path and headed into the park. 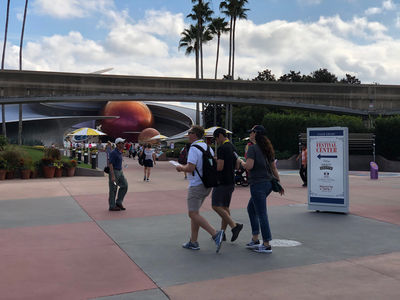 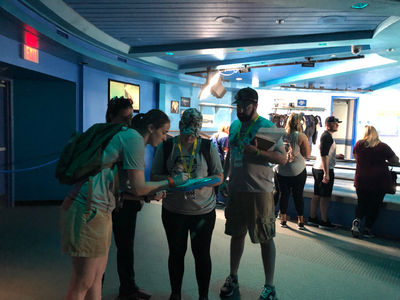 Second place team Chicago Skyliners confer over the weight of one of The Sea's manatees. Photo by Stephanie Wien.

This event marked the first time that a version of a "rewind" game was offered at Epcot; quests from early Epcot MouseAdventure events were "remixed," by updating the source data and changing out final answers. Unlike most events where the game is written weeks beforehand, The Third Gate Games team worked feverishly in the days leading up to the event to complete the game's final elements. Players were challenged with 11 quests and trivia around Future World and World Showcase amid the crowded walkways of the final weekend of the Food and Wine Festival.

Future World quests were divided between the two halves of the area. On the eastern portion, teams searched signs to locate a series of pictured letters that were used to decode a clue leading them to a specific panel of the Leave a Legacy area at the front of the park. On that panel, one person's tile features a quote that has become much more commonplace in the intervening years since it was installed: "May the Force be with you." On the western side of Future World, teams located missing items of information from the three pavilions to create a decoder key for the encoded final question. Once decoded, the question lead them to the Inventors Circle just outside the Innoventions West breezeway to identify one of Louis Pasteur's discoveries (but not the one you're thinking of). 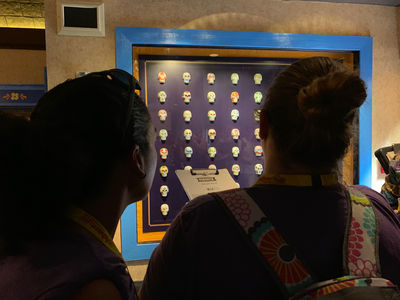 Teams navigate the display in Mexico to locate the right sugar skull. Photo by David Perry.

Once World Showcase opened after 11 a.m., players headed to complete the quests around the lagoon. Teams needed sharp eyes on the Gran Fiesta Tour in Mexico, followed by a test of their artistic abilities to re-create the sugar skull design located based on their answers to the multiple choice questions from the ride. The second attraction that teams experienced was Canada's Circlevision film. Teams placed a series of images in order as the saw them during the show, revealing a final question about the French name of The Mill Stage, the pavilion's live act venue. 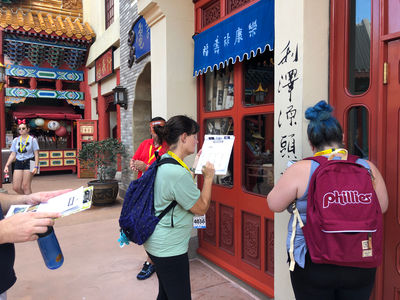 Being able to read Chinese is no help in this quest, where a MouseAdventure-specific translation leads to the final question. Photo by Stephanie Wien.

A combined quest in Norway, China, Germany, and Italy required teams to fill in the walls of a maze based on information in the various pavilions, then navigate through their creation to spell out a final question that was answered at the Refreshment Outpost. France's Morris columns feature art exhibition posters that were the key to solving that area's quest. Not to be outdone, China's courtyard columns also featured in a quest where teams decoded the characters there based on a provided "MouseAdventure English-Chinese" dictionary. 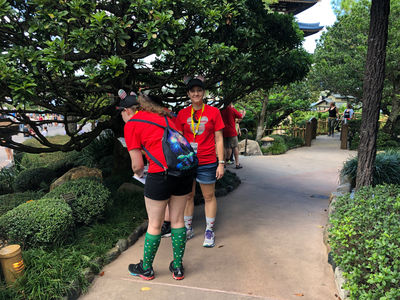 Many teams feared a return to Japan's Kawaii exhibit, which featured prominently in the Silly Symphonies event in spring 2016. They were relieved upon discovering that the majority of the data for the quest in that pavilion was located in the area's beautiful gardens, with only a small amount of information needed in from the mascot section of the exhibit.

Morocco's mosaic tile in its Fez House courtyard was the key to decoding that pavilion's quest, which led to a final question about the pavilion's minaret, which is a replica of one found on the Koutoubia Mosque in Marrakesh. Due to the limitations of the event, the eye spy photos had to be printed in black and white. This challenge led to the creative solution of using images of Walt Disney (for World Showcase) and Peter Quill (for Future World) to obscure various items found around the areas. Despite some challenging images, some teams were able to get perfect scores.

When the game wrapped up at 4:00 p.m., the Third Gate Games crew headed back to their grading lair, only to reappear at Seabreeze Point on Disney's BoardWalk property for results at 6:30 p.m. 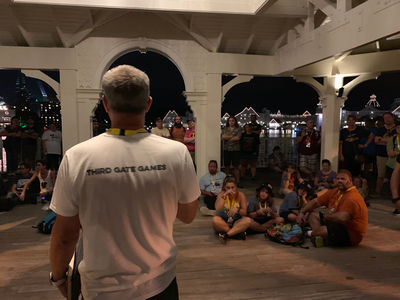 Full results for all teams are available on the event results page. Scores are out of a total possible points of 520. A full list of quests with answers will be posted on the MouseAdventure website soon.

The best new team (not otherwise placing) was Lifetime Journeyers with 485 points, who placed fifth overall.

The top two teams were: