A Penny for Your Thoughts and Souvenirs

As Disneyland Resort visitors, we've all walked past those penny machines sitting in a corner near an attraction exit or merchandise shop corner. Put in two quarters and a penny and get a fantastic Disney token to take home with you. Most of us are probably too busy scurrying on our collective ways aiming to hit a FastPass kiosk on Space Mountain to spend a few minutes to stop and take a look. Sure these machines pop out great Disneyland souvenirs, but did you know that a subculture of pressed pennies enthusiasts collect the Disneyland Resort elongated coins? And not just a few here and there, but for the past few decades? Time to go treasure hunting—but first a bit of background.

The art of pressed coins is almost 200 years old, dating back to 1818 in Austria. The pressed souvenirs were introduced to the United States in the late 1800s in Chicago during the World's Columbian Exposition. The first two pressed penny images—also called plates or dies—debuted in Disneyland Park's Penny Arcade (naturally) in 1987. According to ParkPennies.com, the first coin was Mickey Mouse's face with "Disneyland" emblazoned behind him. The second pressed penny was embellished with "Bear Country" with mascot Big Al and his guitar. More than 30 years later, the Resort houses more than 70 machines with roughly 150 plates that change out periodically with events and seasons. And it's not just pennies. There is one dime kiosk, two nickel machines, and 11 quarter locations throughout the Resort. 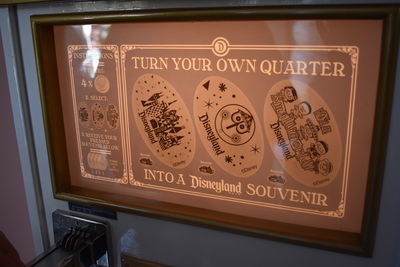 Fantasyland's "it's a small world" Toy Shop is home to one of the almost dozen quarter coin pressed machines. Photo by Lisa Stiglic.

The machines carry up to three pressing plates. Over time, the dies can wear down, break, or are just pulled off stage for a newer image. What happens to the now "retired" plates? Well, some are destroyed due to the deteriorated condition, a few might go to auction, and some just disappear. Disney will also repurpose the machines with newer plates depending on the existing state. What this means is once a die is "retired" that image is no longer available making it indeed a collector's item. In turn, some of the older pressed coins turn up on auction sites for a pretty penny. Pun intended. Ebay just sold one of the aforementioned first Disneyland Mickey pressed penny images for $122. Several seasonal, dated elongated coins are also currently listed for several-hundreds of dollars on Ebay. (Note that sold and listed are two separate things on ebay).

I've always been the guest who finds a favorite character, puts in my 51-cents and walks out with a fun souvenir. Not anymore — now I'm a true penny presser. My friend Jennifer and I spent three-days hunting down a majority of the current machines at the Resort. She was on a mission and preplanned by bringing her own rolls of quarters and pennies. There is no right or wrong penny to use, but enthusiasts tend to use the pre-1982 copper coins. The zinc pennies thereafter tend to leave a silver streak in the pressed result. If using a silver coin, collectors advise to use coins dated after 1965 because the image comes out cleaner. If you forget to bring your rolled coins, no worries as cast member cashiers can break bills for needed change.

For reference, the pressed pennies machines will cost you 51-cents per pressed coin — two quarters for the cost and one cent for the finished product. Nickel machines require 80-cents for use — three quarters for the fee and a nickel for the souvenir. You'll need three quarters and a dime for the dime kiosks, and four quarters to use the pressed quarter machines. The structures are easy to operate — just select the image, insert your coins in the arm slot then push the slot to dispense the coins. Your pressed coin will dropped in mere seconds. 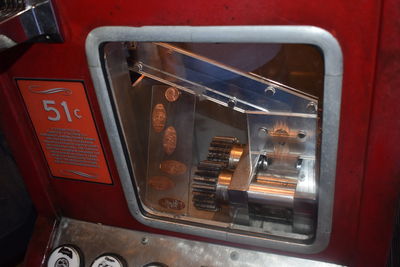 Part of the fun of using the elongated coin machines is watching your souvenir getting smashed then drop to reveal your prize. Photo by Lisa Stiglic.

Like I previously mentioned, there was a method to the madness. My friend uses the elongated coins as part of her jewelry-making. She was searching to specific character groups to theme her bracelets so off we went looking for Tinker Bell, Peter Pan, and the rest of the Neverland crew. Luckily, we had a list of current locations. There are Disneyland Resort maps of the locations. Most characters or images fit with the "land" in which they belong, but not always. Thinking Tinker Bell would be in Fantasyland, we were surprised to find her in Main Street U.S.A.'s Opera House and Peter Pan had flown across the way to Penny Arcade. 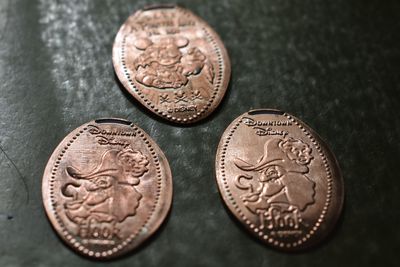 We located Captain Hook along with Pirate Mickey in Downtown Disney District, far from Peter Pan and Tinkerbell. Photo by Lisa Stiglic.

Note that Captain Hook is on one of two hand-crank machines on property. These older versions are both located in Downtown Disney District. Instead of pressing a button to choose your image, you use the crank to advance the chosen plate to smash your coin. These machines are visually more entertaining than the modern push button models.

Disneyland Park houses 27 machines each with three images. Here, you'll find classic characters, princesses, and Pixar favorites. In fact, Buzz Lightyear is one of the top presses in the Resort. 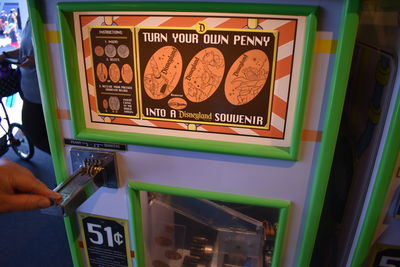 Fly to "Infinity and Beyond" with Buzz and other Toy Story characters. This penny press is located in Little Green Men retail location near the exit. Photo by Lisa Stiglic. 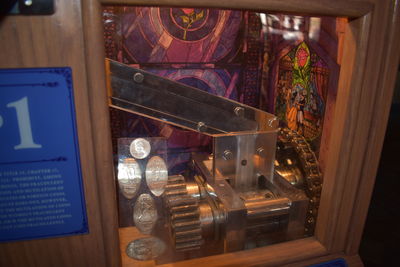 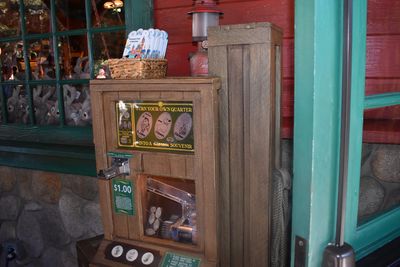 Another hard-to-find quarter machine features the Up characters. Look for it at Rushin' River Outfitters. Photo by Lisa Stiglic.

The Disney elongated coins are actually the cheapest souvenir in the Resort if you don't count the free celebratory buttons. But if you want spend a little more and to start your own collection, a great way to begin is with Disney Parks pressed pennies collectors' wallets or booklets. These are easily found near the machines at retail locations. For the serious-minded, there are tutorials online on how to clean and preserve your new collection pieces. Many enthusiasts keep binders full of coins wrapped in individual protectors then place them in a full-page protector. 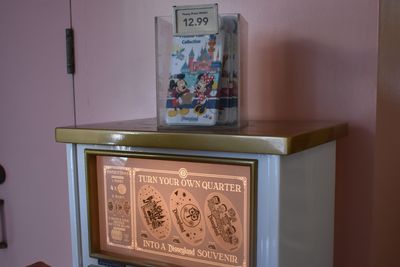 Disney Parks changes out the designs of the pressed pennies wallets periodically. Each book contains slots for pennies, and silver coins. Photo by Lisa Stiglic.

And, like my friend Jennifer, the online craft world has discovered great ways to repurpose the coins. 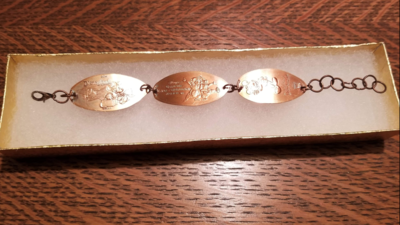 One-of-a-kind jewelry is a creative and personal way to keep the Disneyland pressed coins. Bracelet and photo by Jennifer Nelson

Disneyland Resort always has so much depth and layers to reveal such hidden surprises as the elongated coin machines. So next time you're exiting an attraction and spy one of the kiosks, stop to create a one-of-a-kind memorable souvenir to take home. You might find yourself with a new hobby.