Disneyland Resort - Did You Know?

I consider myself a Disney-nerd. I mean not to the point where I Disneybound and buy the latest color trend every time I visit the Disneyland Resort, but more of a fascinating interest about Walt himself and the history of the Resort. There are backstories to everything in the Resort – lands, attractions, even cast members – all which have minute details to bring the stories to life. Some of these particulars are hidden but all are part of the magic. Here are some of my favorites.

Did You Know: Disneyland Park

Maybe this little detail is a bit more known to guests but for those of you not aware, Jungle Cruise does have safari maps to hand out after your excursion. I double-checked my last visit and yes, the maps are still available, but on a first-come first-serve basis. However, you must ask your Jungle Cruise cast member upon exiting and you will be required to do something relating to the safari. OK—I had to roar like a lion. Be prepared to earn your map. 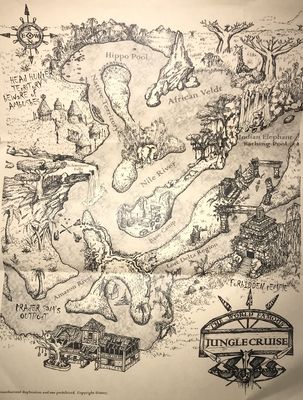 The Jungle Cruise map is a sought-after souvenir to take home. Photo by Lisa Stiglic.

When Indiana Jones Adventures opened in 1995, lines were long for the thrill-ride featuring everyone's favorite archeologist. Even with the extended wait times, Disney made it fun. The circuitous queue led guests through caverns, tunnels, around a well, and even Indy's friend Sallah was there to give an update on Dr. Jones. Disney Imagineers threw a few other surprises in the mix. In one portion of the tunnel, there is a vertical bamboo pole running top to bottom. The flexible pole, when pulled, collapses the ceiling giving waiting guests a bit of a shock. The drop only works occasionally now but it's still a fun tip to point out to friends. Up at the well, a rope hangs off simulating a bucket at the bottom. A sign is placed nearby which reads "CAUTION! DON'T PULL THE ROPE. HANDLING FRAGILE ARTIFACTS". Pull the rope. You'll hear plenty of excited voices coming up from the well bottom.

Another concealed Disney gem in the queue is a sign from the original Eeyore parking lot. During the zig-zag stretch where Sallah is on black and white film talking to guests, turn around and look up in the rafters. I have yet to see it myself but have seen photos for proof. Let me know if you catch a glimpse of that one.

The Little Man of Disneyland

This one I'll share but let you try to find it yourself. Near the base of a tree in Adventureland, you may see what looks like a little house. You have discovered the hidden bungalow of Patrick Begorra, the tiny leprechaun who lives at Disneyland Park. This miniature structure is based on a 1955 Little Golden Book story titled The LIttle Man of Disneyland". Mickey, Donald and Goofy befriended Patrick who was living in the orange groves which would eventually become the Resort. Patrick begrudgingly gave up his home and although Mickey offered to build him a new one once Disneyland opened, Patrick declined. He wanted to find his own place. So one night, he packed up his belongings and moved to this secret location. 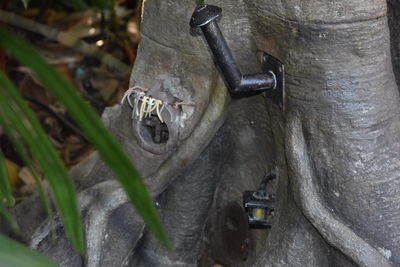 Finding Patrick Begorra's home is a great family activity, especially for those with younger kids. Photo by Lisa Stiglic.

Author Ray Bradbury and Walt Disney cultivated a friendship early in their respective careers. Bradbury worked with Disney, as well with contributing to the development of Spaceship Earth in EPCOT and penning Something Wicked This Way Comes, the 1983 Walt Disney Productions thriller. In 1972, Ray Bradbury wrote a fantasy novel titled The Halloween Tree. He told Walt that he thought Disneyland Park was a perfect place for his Halloween Tree to rest. In 2007, The Halloween Tree was dedicated to Mr. Bradbury and his contributions to the company.

The little oak tree stands in Frontierland near The Golden Horseshoe. The plaque dedicated to Bradbury reads:

"On the night Halloween 2007, this stately oak officially became The Halloween Tree, realizing famed author Ray Bradbury's dream of having his symbol for the holiday become a part of Disneyland". 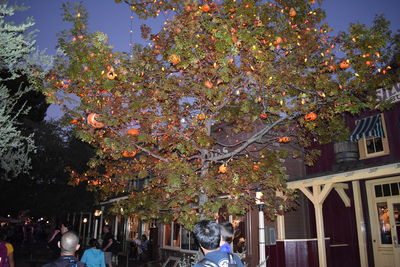 During Halloween time at Disneyland Park, the tree is decorated in lights and with hand-painted mini pumpkins. Photo by Lisa Stiglic.

Even though Disney California Adventure Park may not have the back history that its counterpart does, the Park still has a lot of fun facts to discover.

If you venture to Pacific Wharf, be sure to stop at two locations for a quick sample…for free! The Boudin Bakery Tour, one of the original attractions from Disney California Adventure Park's 2001 opening, offers a slice of sourdough bread upon entering. The tour is self-guided so just follow along the video screens with Colin Mochrie of Who's Line Is It Anyway? fame, and actress Rosie O'Donnell to learn about the history of San Francisco's most famous dough.

Across the way from Boudin Bakery is another San Francisco icon — Ghirardelli Soda Fountain and Chocolate Shop. This ice cream dream team joined the park in 2012 and since then, has offered incoming guests a small piece of their chocolate heaven. Who can say no to chocolate? Who can say no to FREE chocolate? Yum! 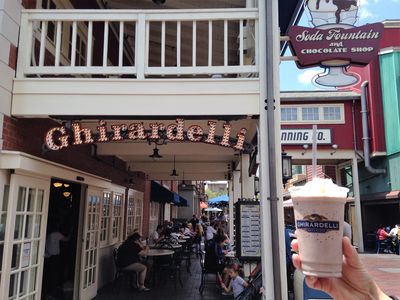 There may seem to be too many choices at Ghirardelli Soda Fountain and Chocolate Shop but who cares? Try them all! Photo by Lisa Stiglic.

Disney as a whole is known for the company's "Easter Eggs" or hidden references to other Disney-related items, characters, films or people. Disneyland Resort has perfected the craft since its origins more than 60 years ago so you know some of the "Easter Eggs" are tricky to locate. The queue of Guardians of the Galaxy: Mission Breakout! holds a myriad of nods to past Disneyland Park attractions and Disney film references. In the chamber room as you ascend to the top of the elevators, you may notice a familiar yeti – Harold!. He was relocated here after the 2015 overlay of the Matterhorn Bobsleds. In the same cell, stands a grand piano with a certain cephalopod draped on it. Think back to Country Bear Hoedown and you may remember Terrence the Bear singing about his octopus lady-love in "Two Different Worlds". 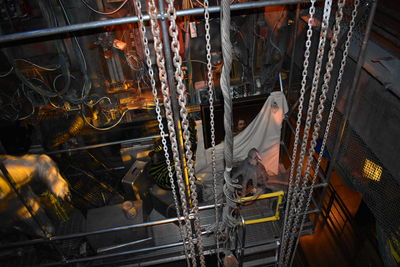 Terrence's love interest awaits his return in the queue at Guardians' of the Galaxy: Mission Breakout! Photo by Lisa Stiglic.

And, as a tribute to the original Tower of Terror, while you are staging in the Collector's Office, look for an original bellhop hat and a Tower of Terror bookmark tucked inside one of the books in the collection.

Telegrams From Molly and Millie

The citizens of Buena Vista Street are a complete delight. Mayor-in-waiting Donna Linn De Larria and her companion Lady stroll along the street to ensure guests are having a grand day. While talking with the mayor, you may see someone roll along on a bicycle. Sisters Molly the Messenger and Millie the Messenger run the telegram service on Buena Vista Street delivering notes to citizens and possibly anyone else. You might find yourself the recipient of such a letter if you ask, maybe even from Mickey Mouse. And a fun note, the sisters will deliver letters to Santa during the holiday time. For more antics of the Buena Vista Street gang, check out Todd Pickering's article.

Do You Know More?

My list is actually longer but I can only share so much with readers. Some surprises are just meant to be uncovered alone. You can add to this list or create your own and look for something new every time you visit Disneyland Resort. You'll be surprised at what you find.