The World of Disney, Reimagined

When Word of Disney had its grand opening on October 2, 1996, the concept was simple: It was born to be the largest Disney character merchandise experience in the world. It succeeded. On the day it first threw open its doors to the public, it boasted 51,000 square feet of retail space.

My own first experience with the store was a sad one. It was early 1997, and I was visiting the resort with family. We were staying at Port Orleans Riverside and had rented a motor boat to jet down the mighty Sassagoula River, which, as park aficionados know, runs all the way down to what was then the Disney Village Marketplace. We entered the main waterway, and I could see the new store in all its massiveness, people swarming around the front, most carrying shopping bags. I couldn't wait to get inside, but sadly, was on a boat in the middle of the lagoon—and unless I wanted to go for swim, had to turn around and motor back to the hotel. I was so close and yet so far. It was so sad—OK, not really. You know I went back via land that night and shopped my heart out.

The World of Disney concept continued to be rolled out, in a limited way. On January 1, 2001, a second World of Disney location opened as part of the inaugural lineup at Disneyland's Downtown Disney. A third location opened in 2004 on New York City's Fifth Avenue (around the corner from where I worked—I was so happy). It stayed for many years until high rents precipitated a move to a more conventional, though supersized and fun, Disney Store in Times Square.

Flash forward to 2018, when really for the first time in its history, the World of Disney Store at Walt Disney World's Disney Springs Marketplace underwent a massive renovation. Gone are the maze-like series of separate rooms and 1990s pastel colors. Walls came down and exposed brick went up as the store was brought into the 2010s and more importantly, made to fit the Disney Springs theme. 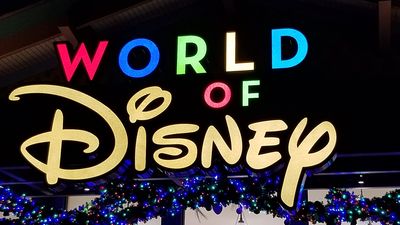 The brand new sign in front of the store is just the first of the changes.  Photo by Gregg Jacobs.

The store was given a wide open, warehouse kind of feel, fitting the idea that this space was once related to the local business of bottling water from the local spring. Showcasing the genius of the Disney imagineers, the specific theme of the store is that it was once an animation studios. A "faded" sign above one of the entrances says "Village Marketplace Annex Animation Studio." Throughout the store, there are old animators desks and examples of sketches from Disney animated classics. It was fun walking through the space and seeking these out. 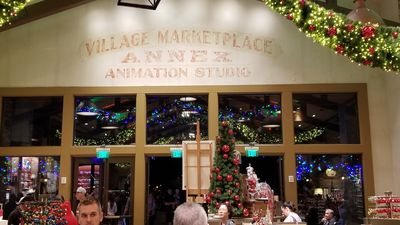 Above one of the entrances is a faded sign giving a clue as to previous occupants of the space as per the store's backstory.  Photo by Gregg Jacobs.

The store remains huge. You stand in any given place and can now look out over the thousands of square feet of merchandise. It can feel a bit overwhelming, but despite the undeniable openness of the store, it's still essentially divided into sections. 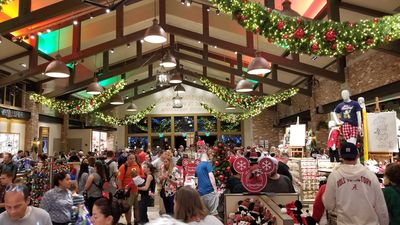 From any vantage point, it's obvious how large the store is. Photo by Gregg Jacobs.

Disney made it easy for us to find what we're looking for by placing large lit signs in each area. Featuring simple messages, such as "Tees", "Mugs", "Hats," and "Home," Disney doesn't make it difficult to zero in on what you'd like to see. 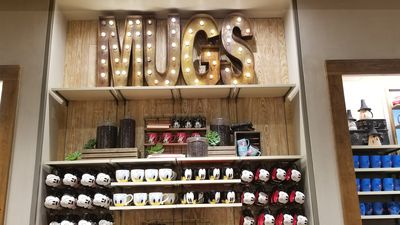 Disney makes it easy for you with simple light-up signs that say things like "Mugs". Photo by Gregg Jacobs.

I'll get into a little detail, but the overall selection isn't terribly changed from what was there before, with a few happy surprises along the way.

First I'll talk about a series of items that have become a mainstay in my articles, tees. To find them, look for the light up sign that blares "Tees" at you (ha ha). Then marvel at the ever-growing selection. As I've said a hundred times before, I love the standard WDW tee with the year on the front as much as the next guy, but what gets me really excited is when they get creative. 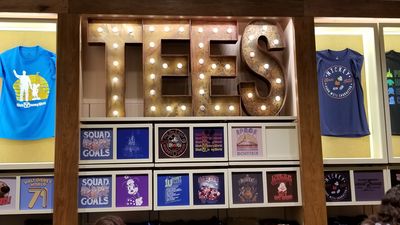 The selection of Tees at World of Disney continue to get better and better. Photo by Gregg Jacobs.

There are dozens of different shirts available featuring a wide variety of Disney characters and films. If you want to see smiling princesses, Disney has you covered. If you want to see villains, you have a lot of choices. If you're like me, and like to see funny puns based on Disney rides, you're good with that, too.

Standouts for me were a bright yellow shirt that said "What Up Dog" with Pluto as the "O," a red shirt with Gaston of Beauty and the Beast fame with the word, Extrovert and a shirt that said "ride the rails" with Mickey and a bunch of travel images "advertising" the Grand Circle Tour at the Magic Kingdom. Every time I visit, the selection seems to expand, so I recommend checking these out.

Moving on, the new World of Disney also maintains a large "Home" section filled with glasses and other kitchenware.

Near the home section, there was a large display of high-end bags, purses, and backpacks. These are generally high end and have price tags to match. A few of these were amazing tributes to the parks. There were two leather backpacks (granted, at $80 each). One looked like Orange Bird from Adventureland in the Magic Kingdom and the other was the clock face from "it's a small world." 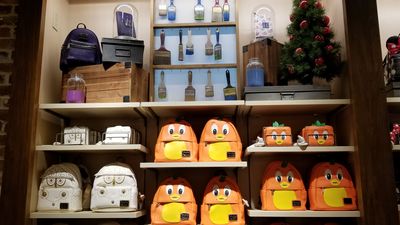 There were two great backpacks with familiar faces. Photo by Gregg Jacobs.

The big area that's new, at least to me, focused on the Mickey Mouse Club. The merchandise here is "vintage" all the way and pays homage to the original club from the 1950s. 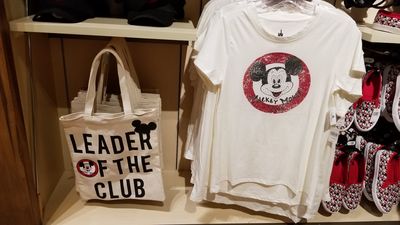 The shop has a great vintage tee and tote bag that pay homage to the original "Mickey Mouse Club". Photo by Gregg Jacobs.

There are T-shirts, footwear, tote bags and mouse ears, all done old-school as throwbacks to the initial TV series.

The big area at the end of the store closest to the Lime Parking Garage used to have the big plush wall. Now, it's largely a multi-purpose space loaded with toys, all things princess and what I can tell will be an ever-changing area depending on the time of year and what Disney's current hot property is. I was there during the holidays, and it was filled with ornaments, candy and holiday-themed pajamas (yes, I have a pair). There are also projections on the large wall. While I was there, it was holiday-themed, saying "The Happiest Holiday on Earth."

The other half of the area is dedicated to toys and lots of princesses. When I was there, Ariel was projected on to the wall and there was a large display of Cinderella dolls. The chandeliers hanging from the ceiling were a nice touch. 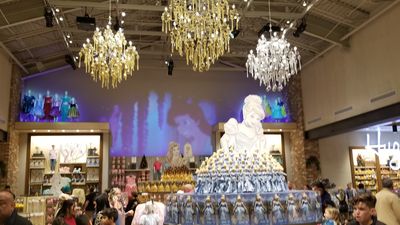 The princesses are still well represented at World of Disney. Photo by Gregg Jacobs.

There's a wide selection of toys for all ages here as well as the more conventional souvenirs, such as key chains.

All in all, change is often a good thing, and the newly reimagined World of Disney essentially brings it into the late 2010s. The theming is great. It fits in well with the rest of Disney Springs, and the animation Easter eggs are a nice bonus. The open concept floor plan (do I sound like a real estate agent?) makes the store easy to navigate, and the signage make it easy to find what you need.

The merchandise selection feels a little "been there, done that" to me, but there are some great items, and it's definitely worth your time.