The Tribute Windows (and Other Salutes) to Disney Legends at Disneyland.

Disneyland's Main Street U.S.A. is small-town Americana replicated, which is exactly what Walt Disney envisioned. The stores and shops along the street are filled with sweet-smelling candy, bright and festive merchandise, and even a cinema showcasing Mickey Mouse's earliest animated shorts. Above the shops painted in decorative scroll, are proprietors' names of each location. But, if you look closer, you may recognize one or two of those names. You've stumbled across one of the hidden details in Disneyland Resort – the "Disneyland Windows" honoring those Disney individuals who have contributed above and beyond the Disney magic.

To be considered a window honoree, the individual must meet three criteria – 1) only upon retirement, 2) only with the highest level of service/achievement, and 3) only with an agreement between top Disney Park officials and Walt Disney Imagineering, which designs said windows. There is no official windows list published by Disneyland Resort but you can easily find them online (or at Van Arsdale France's "Window on Main Street"). This article is my own list of some favorites and possibly the most recognizable names to Disney fans. Put on your walking shoes because we have a lot of ground to cover.

But, before I continue, a quick note about Disney Legends. A person who is bestowed the "Disney Legend" honor is an individual who has made the highest contribution to the company—much like a "Hall of Fame" recipient. The Legends receive a statuette, as well as a bronzed plaque with the signature and handprints of the honoree. The Walt Disney Studios in Burbank displays the plaques at the Legends Plaza. Many Disney theme park window honorees also hold the distinguished title as Disney Legend, which many do.

The homage to Walt's father Elias is strong throughout the Disneyland Resort. In addition to the Disneyland tribute window, Elias has a second window on Buena Vista Street in Disney California Adventure Park, as well as his own shop – Elias and Co. – on the same street. Although he died well before Disneyland Park opened its doors in 1955, his early influence on his young sons, Walt and his brother Roy, helped the brothers in future decisions. For example, Elias decision to move the family to Marceline, Missouri, during Walt's childhood, made a lasting impact on the young animator. Walt based some features on Main Street U.S.A. after Marceline. 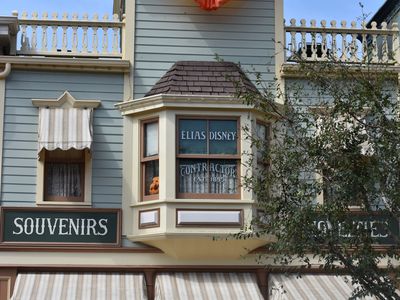 Elias Disney's window is one of the first tribute windows seen upon walking down Main Street U.S.A. in Disneyland. It sits above the Emporium, Disneyland's largest merchandise location. Photo by Lisa Stiglic.

Heralded as the first Disney "Imagineer" (Disney speak for the engineers who designed many of the Disney theme parks' attractions), Roger Broggie's window is above the Main Street Magic Shop across from the Emporium. Broggie was crowned a Disney Legend in 1990. 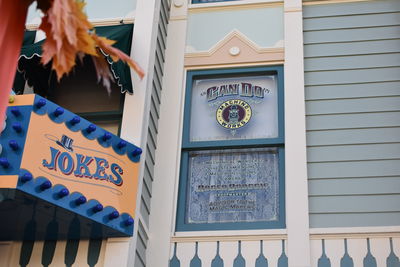 "Advisor to the magic makers" is the tagline for Roger Broggie's honorary window. Photo by Lisa Stiglic.

Next to Mr. Broggie's window, also above the Main Street Magic Shop, is the name of the contemporary face of Walt Disney Imagineering – Tony Baxter. Baxter oversaw the construction of Disneyland Park classics, including Big Thunder Mountain Railroad, Indiana Jones Adventure, Splash Mountain, and Finding Nemo Submarine Voyage. He was honored as a Disney Legend in 2013. 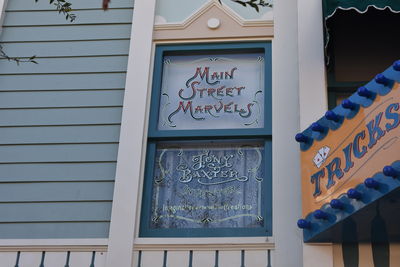 Tony Baxter's window is the modern counterpart to Roger Broggie's window; both contributed above and beyond to Walt Disney Imagineering. Photo by Lisa Stiglic.

This next one is a tribute to two individuals who contributed their musical talents to Disneyland Park, as well as one of Walt Disney Production's great live-action pieces, Mary Poppins. Robert and Richard Sherman are honored on the door of 20th Century Music Company, which is nestled between the Main Street Magic Shop and the Main Street Cinemas. The Sherman Brothers also penned the earworm theme song for "it's a small world" which Time.com listed as the most played song ever. Ever. Robert passed away in 2012, but Richard is still active and recently contributed to the score of the 2018 Walt Disney film Christopher Robin. The Sherman Brothers became Disney Legends alongside Broggie in 1990. 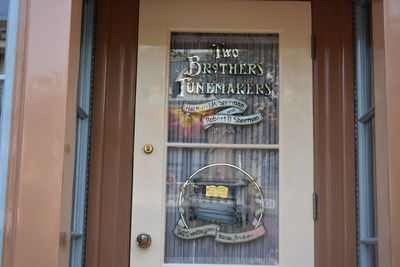 The "Two Brothers Tune Makers" door opened to the public in 2010. Photo by Lisa Stiglic.

"Orange Grove Property-Manager" is the listing on the window above Market House (aka Starbucks). This honorary window goes to Ron Dominguez, who not only became VP of Walt Disney Attractions, but has a family tie to the property on which Disneyland now resides. Mr. Dominguez' maternal grandparents owned the land (orange groves) Walt Disney purchased for his theme park location and in fact, he actually was born and raised on the land. He then started as a Disneyland cast member in summer of 1955 and worked his way up through the park and Walt Disney Company, retiring in 1994. 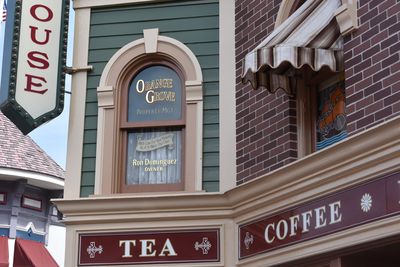 In addition to the nod to his heritage, Ron Dominguez was also honored as a Disney Legend class of 2000. Photo by Lisa Stiglic.

You can't walk through Disneyland or watch some of the Disney classic animated features without knowing Rolland Crump's magic. As an assistant animator at the Walt Disney Studios in the 1950s. "Rolly" Crump contributed to many notable movies such as Peter Pan and Sleeping Beauty then moved onto WED (Walt Disney Imagineering). As an Imagineer, he designed several attractions including some contributions to Disneyland's Haunted Mansion, as well as creating the animated clock face on "it's a small world." Mr. Crump retired from Disney in 1996 and was honored as a Disney Legend in 2004. 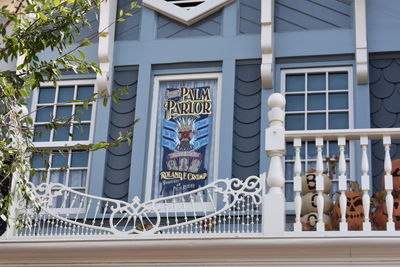 Marc Davis was one of Walt Disney's "Nine Old Men," the core animators of the Walt Disney Company in the earlier years. Davis created some of Disney's most beloved characters, including Snow White, Cinderella, and Tinker Bell. Besides being a key animator, Davis also worked on developing many attractions and characters at Disneyland. You've seen his work in Pirates of the Caribbean and Mr. Toad's Wild Ride to name a few. Alice Davis joined the Walt Disney family as a key costumer for a few early Disney films but came into the spotlight when Walt asked her to design the clothes for the "it's a small world" characters for the 1964 World's Fair. Alice Davis also clothed the buccaneers of Pirates of the Caribbean. Marc Davis received his Disney Legend status in 1989 with the rest of the "Nine Old Men" while Alice became a Disney Legend 15 years after her husband in 2004. 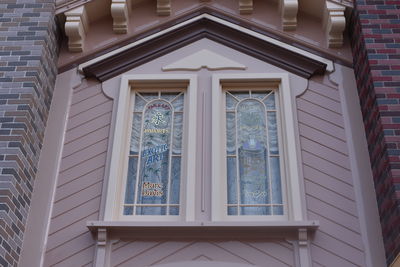 Not all the honorary windows are along Main Street U.S.A. While Walt himself has one located above the Main Street Cinema, his second window is in ToonTown recognizing his early works at "Laugh-o-gram Films". And one of Disney's best loved actors has his own window in Frontierland which is a perfect spot for none other than Davy Crockett himself – Fess Parker. Parker also portrayed Daniel Boone, but his work with the Walt Disney Company made him a household name, well at least for every 10-year-old boy wearing a coonskin cap. For his contributions to Disney, he was awarded the Disney Legend status in 1991 and his own Disneyland window in 2004. 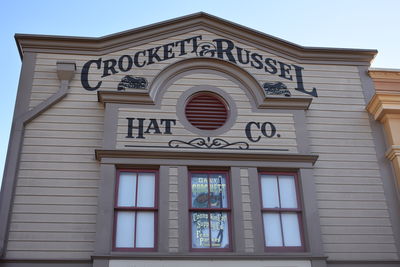 The Crockett & Russell nod is to both Davy Crockett and George Russell, characters from the Disney show. Buddy Ebsen portrayed Russell and although was made a Disney Legend in 1993, he has yet to receive his own Disneyland window. Photo by Lisa Stiglic.

What can one say about Dame Julie Andrews? She is Disney royalty having brought the character Mary Poppins to life and in return receiving an Oscar for her portrayal. Although Andrews does not have an actual window at Disneyland, her legendary status is inscribed in a hidden location. For the 50th anniversary of Mary Poppins, Disneyland repainted Jingles the lead horse on King Arthur's Carousel with images from the movie as well as her initials. And, Andrews is also a Disney Legend having received that honor in 1991. 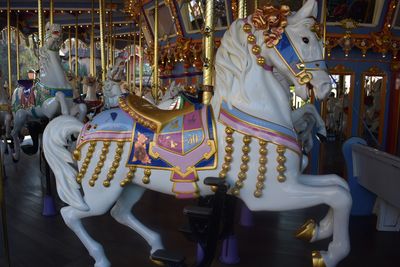 There are close to 90 (!) tribute windows throughout Disneyland. Next time you walk down Main Street U.S.A., (and a few other places around the park) stop and look at a few and learn a bit about Disney history (bring your smart phone for some quick referencing). These are the dreamers and Imagineers who helped shape the "Happiest Place on Earth." What a great way to honor their achievements.