Joining attractions that already ban smoking, such as LEGOLAND, the San Diego Zoo, and Dodger Stadium, the Disneyland and Walt Disney World resorts will prohibit the smoking of tobacco products and electronic cigarettes in most public areas as of May 1, 2019. 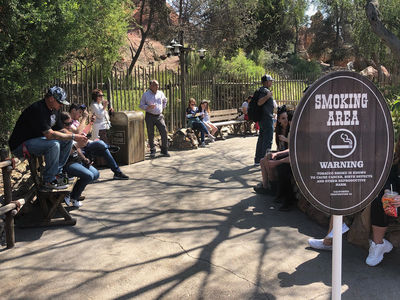 In-park smoking areas like this will close as of May 1, when Disney implements a new ban on smoking in its US theme parks. Photo by Todd Pickering.

The ban in California includes not only Disneyland and Disney California Adventure, but also the Main Entry Plaza between the two parks as well as the Downtown Disney shopping district. Disney will close the smoking areas currently designated inside the theme parks and remove trash cans from Downtown Disney.

After May 1, those who wish to light up must exit the park and go to a new designated smoking area beyond the security checkpoints on the Harbor Boulevard (east) side of the main entrance.

The smoking policy will not change at the three Disneyland Resort hotels, which are already designated as smoke-free. Each hotel property has a designated outdoor smoking area. And while California permits the sale and use of marijuana, it is still banned in all forms at the Disneyland resort.

At Walt Disney World, all four theme parks will become smoke-free, with smoking areas designated outside the security checkpoints of each park. The restriction extends to Disney's water parks, miniature golf courses, golf courses and the ESPN Wide World of Sports complex effective May 1. 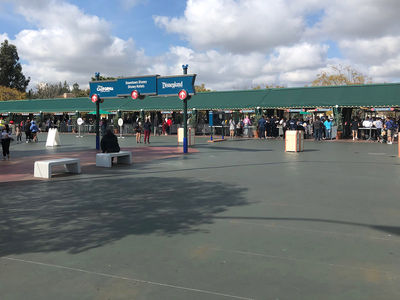 Starting May 1, smokers will need to exit the security perimeter before they light up at the Disneyland resort. Photo by Todd Pickering.

Smoking has been prohibited inside Walt Disney World resort hotel rooms since 2007. Smoking is still allowed in designated outdoor smoking areas at each hotel.

Disneyland officials note that Mickey's Halloween Party and the Disneyland After Dark events are all smoke-free, and that guest feedback has been overwhelmingly positive to the change.