The Japan pavilion is one of those places that, for us, seems to get passed over. Sure, it has the iconic essential backdrop with Spaceship Earth peeking through the torii gate, great for family pictures and selfies alike, but we usually just walk through on our way to or from the American pavilion.

When we finally stopped in to look it over, we found that it really was an interesting pavilion, full of examples of the Japanese culture and all it has to offer. There's no "ride" or film about Japan, but we think that with its gardens, restaurants, and merchandise, it really shows off what Japan is all about. At least, that's what we imagine. Here's what we found:

As you enter Japan, you'll see the torii gate first, located along the lake. The torii is a Shinto structure that symbolizes the point where the mundane becomes the sacred. 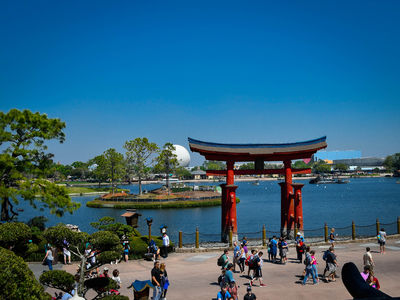 The torii gate in Epcot one is patterned after the Itsukushima Shrine in southeastern Japan. The real torii gate was built in the mid-16th century, but historians believe the original shrine at that location was constructed in the 6th century. Photo by Donald Fink.

The gardens around the pavilion bring a level of calm and serenity to the pavilion, making you want to spend time there. 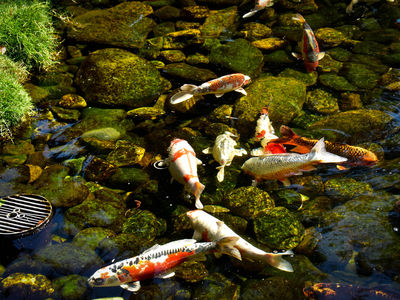 Japanese gardens typically have a stream or other running water feature that often contains fish. The water should flow from the east or southeast to the west as it does in this koi pond at Epcot. Photo by Bonnie Fink. 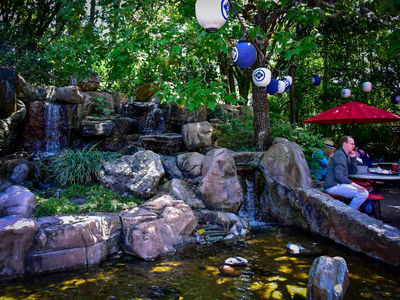 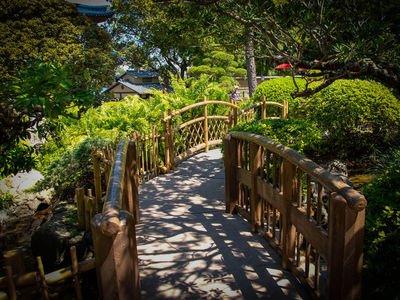 Since running water is important to a Japanese garden, you might correctly imagine that ornate and carefully crafted bridges would also be prominent in their design. Photo by Donald Fink. 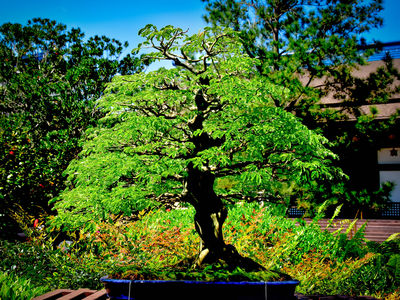 It's easy—and quite natural—to find a bonsai tree in the Japan pavilion. This Brazilian rain tree is 30 years old and has been "in training" for 25 years. Photo by Bonnie Fink. 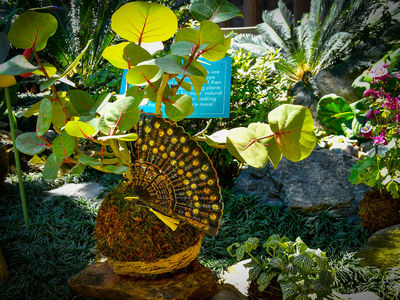 Kokedama is a form of Japanese gardening that uses a clay type soil mixed with peat moss, then wrapped in moss. Since the moss needs shade, the plants selected for this kind of display are usually shade-loving too. Photo by Donald Fink. 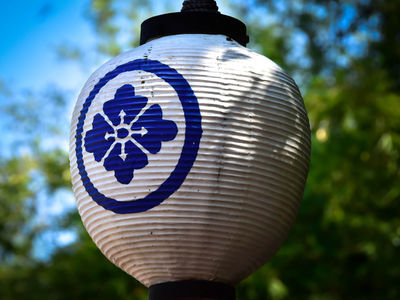 Paper lanterns in Japan symbolize joy, celebration, good fortune, and longevity. The earliest references to them date back to 230 BC in China. Traditionally, they're made from paper or silk with a bamboo frame and a candle for light. Photo by Bonnie Fink. 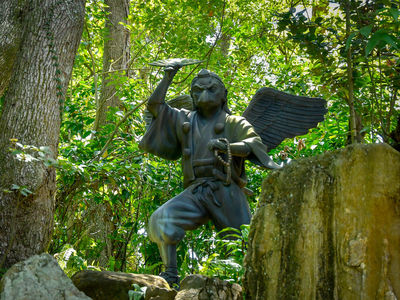 The Tengu takes its name from the dog-like Chinese demon, Taingou, but the traditional Japanese Tengu is in the form of a bird of prey, with both human and avian characteristics. In Buddhism, the Tengu were initially disruptive demons of war, but came to be regarded as protective spirits of the mountains and forests. Photo by Donald Fink.

We were especially taken with the serenity of the gardens in the Japan pavilion. We know that part of the purpose of a Japanese garden is to bring calm and tranquility to the observer, but we never thought that in the hustle and bustle of Epcot, it would actually be that way. Spend a few minutes in the Japanese gardens next time you visit Epcot and see if you agree. Video by Donald and Bonnie Fink.

The buildings in the Japan pavilion are a mixture of the culture that makes up much of Japan. Imagineers have taken inspiration from some of that country's most prominent Shinto and Buddhist traditions as well as some of its most iconic and historic landmarks. To visit Japan, like so many of the other pavilions around World Showcase, gives you a brief overview of the character of the country. 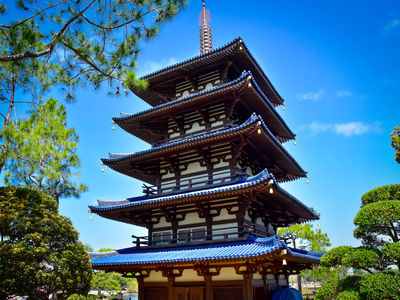 The Goju-No-To (Five-Story Pagoda) represents the five elements that Buddhists believe make up all things in the universe. They are, in ascending order, earth, water, fire, wind, and sky. This pagoda is patterned after the Horyuji Temple in Nara. It stands 83 feet tall, while the original in Japan is closer to 123 feet. Photo by Donald Fink. 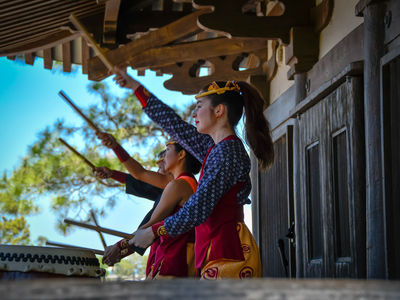 The Matsuriza Taiko Drummers are regulars at the Japan pavilion in Epcot, performing almost daily. It's worth timing your visit to Japan to see their show. They are usually located near the entrance to Japan at the pagoda. Photo by Donald Fink. 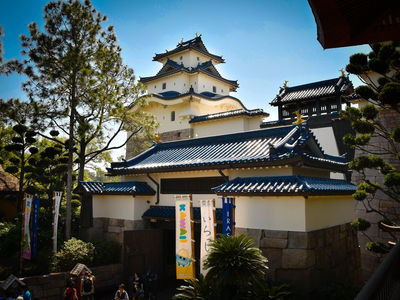 In the very back of the Japan pavilion is a large building modeled after the Shirasagilo (White Egret) Castle in Himeji, Japan. The building in Epcot houses a retail store and a Japanese art exhibit. The real castle in Japan, like many of the historic castles, was used in feudal times to protect the locals from attack. Photo by Donald Fink. 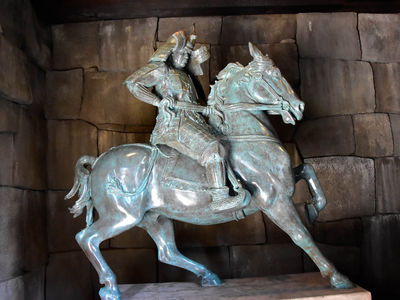 A pair of mounted Samurai warriors stand on either side of the main entrance to the castle in Japan. Photo by Bonnie Fink. 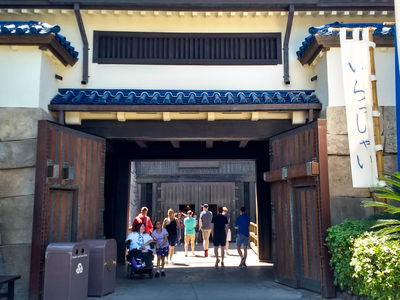 The entrance to the castle at the Japan pavilion features thick wooden gates, much like those found on the real castles in Japan. To add to the realism, there's a bridge and a moat as you enter, but not shown here. Photo by Bonnie Fink.

The Japan pavilion has a surprising amount of Japanese food. There are two main restaurants, one quick service facility, and several smaller options for sampling sake and sushi. 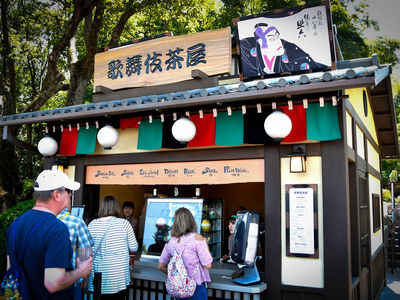 Entering Japan from the American pavilion will take you past the Kabuki Cafe, where you can sample sake, plum wine, beer, ice cream, and even shaved ice. Photo by Bonnie Fink. 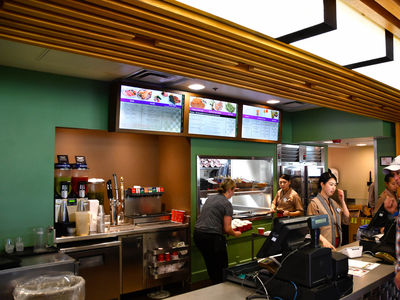 Katsura Grill is the quick-service restaurant in Japan, and is located behind the koi pond on the left of the pavilion, near the waterfalls. Katsura Grill features sushi, chicken or beef teriyaki, Japanese chicken curry, ramen, or udon. Photo by Donald Fink. 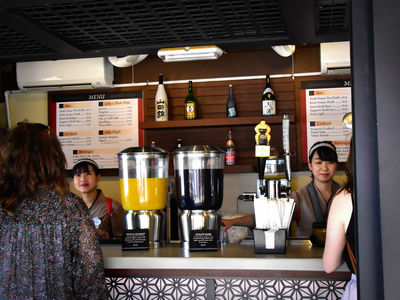 The Garden House is a sake bar located near the steps leading up to the restaurants above the Mitsukoshi Department Store. It features various sake drinks and Japanese beers, some of which are from the Kirin Ichiban Brewery that was founded in 1885. Photo by Bonnie Fink. 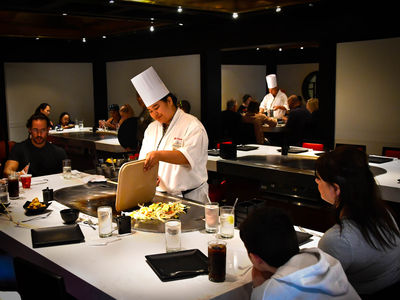 There are two restaurants above the Mitsukoshi Department Store at Epcot's Japan pavilion. Teppan Edo is a teppanyaki-style restuarant where the chef prepares a Japanese meal at your table while you watch. The theatrics of these chefs are entertaining as they work, and the food is good too. Photo by Donald Fink. 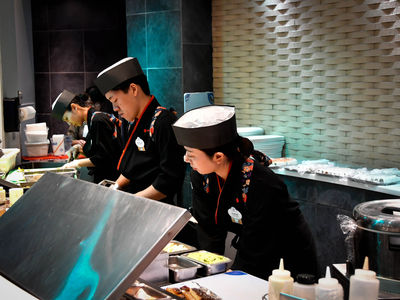 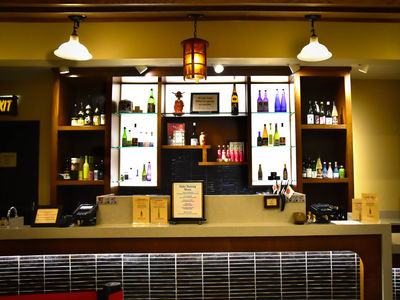 There is no shortage of opportunities to try a sake drink in the Japan pavilion, including another sake bar inside the general merchandise store, Mitsukoshi. Photo by Bonnie Fink.

Kawaii, The Culture of Cute

Kawaii means "cute," or "cuteness" in Japanese. The culture of cuteness is thought to have begun in the 1970s when Japanese teenagers developed their own form of childlike writing as a response to the rigid post World War II lifestyle of Japan. There were various names for this writing, but the most popular seems to have been marui ji, which means "round writing." Marui ji writing features curvy, noodle-like lines with stars, hearts, and sometimes cartoon faces. It was so popular with the kids that it was banned in most Japanese schools.

As you enter the castle at the back of the Japan pavilion, the pavilion's gallery is located on the left; it is currently featuring an exhibit on the culture of cute. The exhibit displays many of the characters that have been created over the years and demonstrates some of the ways this culture has made its way into modern Japanese life. 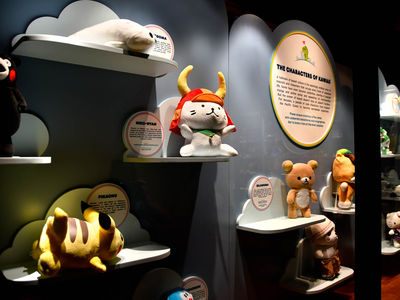 Inside the gallery in the castle you can find a good example of the kawaii culture in modern Japan. Here, in the lower left of the image, you can see Pikachu who originally appeared in Pokémon. Front and center is Hiko-Nyan, patterned after a famous cat in the 17th century who saved his owner from a lightning strike. Truthfully, we don't know if that's a clever backstory from a toy manufacturer, a legend from deep within Japanese culture, or the truth. Photo by Donald Fink. 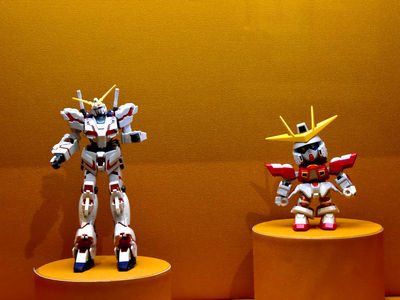 Not every kawaii inspired character is warm and cuddly. These transformer-like characters are considered part of the kawaii culture. Photo by Bonnie Fink. 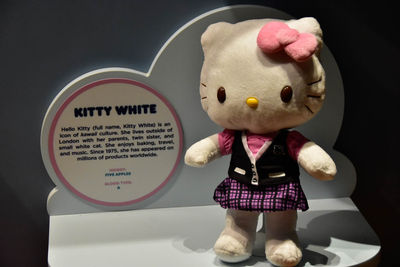 Later, in the merchandise portion of this photo tour, you'll see a traditional "Hello Kitty," which is one of the most famous of all the kawaii characters to ever come out of Japan. It turns out that Hello Kitty, according to the backstory, is not a kitty at all. Instead, she's a third grade human girl living outside London with her parents, George and Mary, and her twin sister, Mimmy. Kitty white, according to the story, does have a small white cat, named Charmmy Kitty. Photo by Bonnie Fink.

Many marketing companies took advantage of the kawaii movement. One of the most famous characters to emerge was Hello Kitty, developed in 1974 by Yuko Yamaguchi for the Sanrio stationary company. Today, you can find Hello Kitty in many countries in the world, waving her paw and welcoming tourists to Japan. 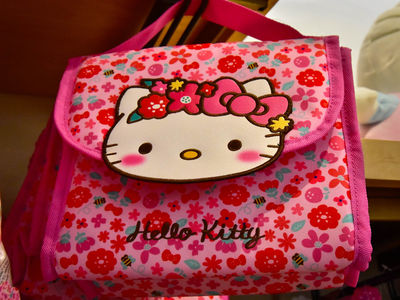 Hello Kitty merchandise is available in many forms at Mistukoshi, including this purse. Photo by Bonnie Fink. 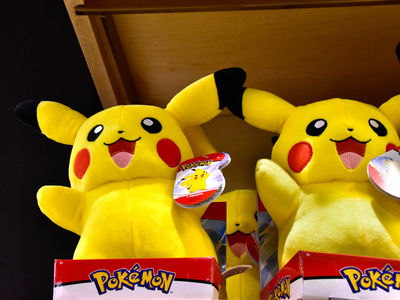 Plush versions of Pikachu from the Pokémon game and animated series are for sale. Photo by Bonnie Fink. 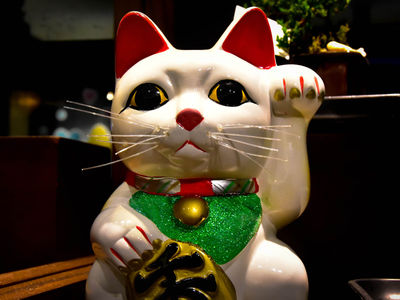 Maneki-neko, the beckoning cat, greets with a raised paw. Photo by Bonnie Fink. 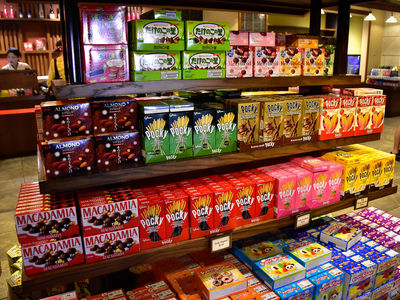 When we travel to a different country, we make a point of stopping at a local grocery store just to see what kinds of things are different. The food section of the Mitsukoshi store in the Japan pavilion contains a large selection of Japanese items, like these chocolate treats, that are common in Japan. Photo by Bonnie Fink. 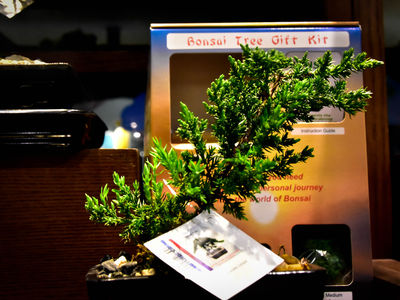 The Bonsai Societies of Florida provide many of the bonsai trees in the gardens at the Japan pavilion, but if you'd like to try your skill at training one yourself, you can take home a starter. Photo by Bonnie Fink.

Of all the years we've been coming to Epcot, this was our first real look at Japan. We were impressed with the quiet and calm of the Japanese gardens and think we'll make more stops along our way through Epcot in the future. We recommend that you also take a look at Chris Barry's article about the Top Five Things to See in Epcot's Japan for a closer look at some of the highlights.