Last time I launched a new series specifically targeting my favorite aspects of my favorite Walt Disney World attractions. I hit the ground running in Fantasyland at the Magic Kingdom with a look at Peter Pan's Flight, one of the all-time Disney classics. This time around I'm heading west—to Frontierland that is—for yet another Disney classic, although this one is a whole lot grander in scope and scale. Ever since 1992 Walt Disney World guests have been flocking to Splash Mountain in droves, consistently ranking it as one of the most popular attractions in any of the Walt Disney World parks. The park opening "rope drop" crowd typically heads straight to either Splash Mountain on one side of the park or Space Mountain on the other. Wait times are usually well over 40 minutes for the rest of the day. Not too shabby for what is essentially a flume ride. Of course, it's a Disney flume ride, which means that it's way more than you'd ever expect it to be.

The story goes that Dick Nunis, president of Walt Disney World and Disneyland insisted that Disneyland have a log flume ride. This notion, of course, didn't sit too well with the Imagineers who always tried to avoid the standard amusement park fare for their guests. Legendary Imagineer Tony Baxter took the idea of a log flume, married it to the classic Disney film Song of the South, and Splash Mountain exploded into existence. And what an existence it is.

With five drops, the largest of which clocks in at 50 feet, Splash Mountain is one of Disney's longest and most elaborately themed attractions. The over eleven and a half minute ride contains 68 different animatronic figures, many rescued from a previously shuttered attraction, America Sings. At the time of its construction, costs soared to around $75 million, making it one of the most expensive projects ever put forth by the company at the time. All that and I'd be hard pressed to find many of you readers out there that have actually seen the film that this massively popular attraction is based on.

The 1946 Disney film, Song of the South is a brilliant example of Disney's groundbreaking efforts to combine live action and animated film components. Unfortunately, due to its potentially racially insensitive subject matter, the film remains shelved by Disney. There have been VHS and Laserdisc releases in Europe and elsewhere, but never in the United States. That doesn't look to be changing anytime soon. And yet, despite the fact that generations of viewers have never seen the film, characters like Br'er Rabbit and Br'er Bear and songs like "Zip-a Dee-Doo-Dah" have long since been ingrained into the minds of Disney fans the world over. Just about all of that popularity can more than likely be traced to one of the all time classic Disney attractions, Splash Mountain. Let's take a closer look at just why this ride resonates with my Top 5 things to love about Splash Mountain.

So many guests at Walt Disney World focus on the big drop near the end of your Splash Mountain journey. It's hard not to see why. Dropping 50 feet at 40 miles per hour is certainly a rush. It's a highlight of the attraction, but in my honest opinion, is such a small part of the whole Splash Mountain experience. 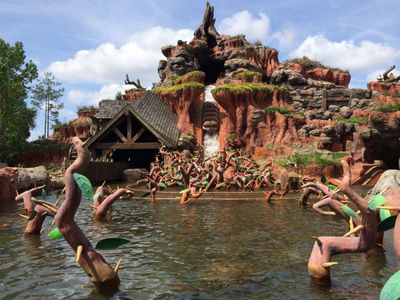 The infamous drop on Splash Mountain takes you five stories down into the briar patch. You might get wet. Very wet. Photo by J. Jeff Kober.

That's why it's lowest on my list. I'm a huge coaster guy and I especially like big drops on rides. The Splash Mountain drop is a total blast, for sure. But, it's only about two seconds out of an 11:45 minute ride. That fact is something that I've been telling my 20-year-old daughter since she was five and I convinced her to give Splash Mountain a try. Actually, it was more of a bribe. I knew she was going to love all of the characters, the music, and the amazingly detailed scenery throughout the ride. So, I bribed her with a Disney Princess pin set that she had her eye on. She did love all of those things that I just mentioned, but it wasn't enough to take her mind off the big drop at the end. She didn't ride it again until she was 15.

The Song of the South animated characters have always been some of my favorites. The dopey Br'er Bear, the conniving and sometimes manic Br'er Fox, and the cool but goofy Br'er Rabbit all populate the attraction as we follow Br'er Rabbit on his quest to leave his home behind and find his laughing place. 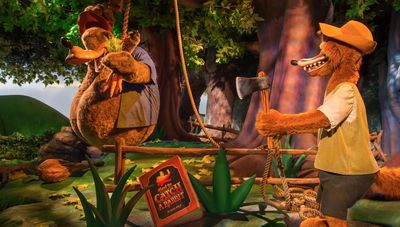 These are just two of the more than 60 animatronic figures to be found in Splash Mountain. ©Disney

I wish Disney had done more with these three iconic characters. On the ride you get the main three, but you also get Br'er Frog, Br'er Roadrunner, Br'er Beaver, Porky Pine, Mr. Bluebird, and a full compliment of turtles, possums, chickens, gators, and plenty more.

3 – The View from Chickapin Hill

There are two wonderfully unique views that one gets from Splash Mountain. The first is after the first small drop. That's when you enter the part of the rise that's outside. Just as you pass the birdhouses you get a fantastic view of Frontierland, the spires of Cinderella Castle, the temple in Adventureland, and even the Contemporary off in the distance. That view you do get to enjoy for a few moments. I don't typically break out the camera or the phone for that matter on such a wet ride, so the following image is taken from Frontierland, on the bridge alongside the river. Imagine that view from up higher and you have an idea of the unique vantage point offered by Splash Mountain. 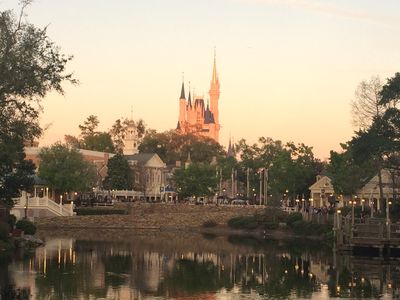 The view from in front of Splash Mountain as the sun goes down is pretty amazing. It's even more amazing from up on the mountain itself. Photo by Chris Barry.

The second view is, of course, at the peak of the ride as you are about to take your plunge 50 feet down into the briar patch. Try to keep your eyes open for the brief spectacular view across the Rivers of America to Cinderella Castle and Space Mountain as well. It's a unique vantage point in the Magic Kingdom. Of course, you don't get to soak that view in for too long. Before you know it, you're cascading over the falls and soaking in a whole other view!

Lots of Disney attractions have music and songs in them. "Grim Grinning Ghosts," "Yo Ho (A Pirates Life for Me)," and "it's a small world" are just a few that come to mind right away. However, not too many Disney attractions have three distinct songs playing throughout the ride. It's a testament to the 11:45 ride time and the fact that you enter so many different rooms throughout your Splash mountain experience. 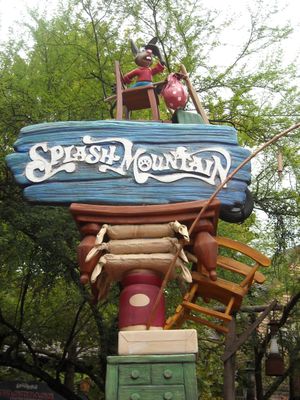 A full soundtrack awaits you every step of the way through Splash Mountain starting right out here by the attraction sign.. Photo by Samantha Barry.

"How Do You Do" takes you through the first main section of the ride and is my favorite. Once you take your first substantial plunges in the dark, you emerge singing "Ev'rybody's Got a Laughing Place." Once you take your final huge plunge, you emerge back home again and you hear the Disney classic "Zip-A-Dee-Doo-Dah," a song that has pretty much become synonymous with Disney. You can't go wrong with any of the three big songs, but there's plenty of other music and variations outside in the queue to be enjoyed as well.

One of my all time favorite reveals in any Disney attraction is the moment after you drop into the briar patch, turn the corner and just when you thought the ride was coming to a logical end, you turn back into the mountain's base and are welcomed by the classic "Zip-A-Dee-Doo-Dah" being sung to you by a dozen or so animals, many of whom are perched on a huge rocking riverboat known as the Zip-A-Dee-Lady. 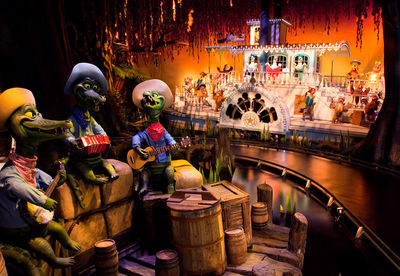 The big reveal near the end of Splash Mountain featuring a dozen or so singing animatronics. ©Disney

This scene is one of those classic Disney "they didn't have to add this in" moments. The ride could have happily ended with the big drop, but the storytelling importance of completing Br'er Rabbit's tale and welcoming him back home where he belongs takes over and truly caps off the Splash Mountain experience as only Disney could—with a big happy musical ending. It's still, hands down, one of my favorite Disney attraction moments.

Despite my daughter's aversion to Splash Mountain, it's a must see attraction for me on every trip. My family likes to stick me in the front if they can so I can be their water shield and take the brunt of the briar patch plunge deluge. From start to finish, Splash Mountain is a Disney attraction masterpiece and really set the bar to a new level after it was built in the early 1990s. The queue is full of fun details as you wind your way through the gardens and deep into the mountain. There's so much to see and enjoy along the way. It's heartwarming and thrilling. It's full of wonderful animatronics and beautiful scenery both real and Imagineered. It's no wonder that it still commands hefty wait times after all these years. It's a benchmark of sophisticated attraction design and there's quite simply nothing else like it.

That's my take on the Magic Kingdom version of Splash Mountain. As always, I'd like to hear what you have to say. Click on the link below and let me know what you love most about Splash Mountain and I'll see you next time with another Disney Top 5.