Details of the virtual queue for Star Wars: Galaxy's Edge

Star Wars: Galaxy's Edge opens at Disneyland on May 31, and if Disney's marketing machine is doing its job, you already know that you can't visit the land during the opening weeks unless you have an advance reservation and valid theme park admission.

Visitors staying at a Disneyland Resort Hotel anytime between May 31 and June 23 automatically receive a designated reservation to access Star Wars: Galaxy’s Edge during their stay. For those not staying at a hotel, Disney last week opened up general reservations to visit the land during the opening period, and Star Wars fans snapped up the available slots in under two hours. 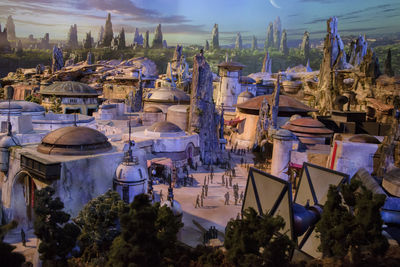 If you did not get one of the coveted general reservations and you don't feel like splurging on a hotel room, your first chance to visit Batuu is Monday, June 24. Instead of an advance reservation system, Disney will use a newly designed virtual queue to control access to Star Wars: Galaxy's Edge. The system shares some similarities with the existing Fastpass system, and is designed to let park guests spend more time enjoying other Disneyland attractions instead of standing in line outside the new land.

The easiest way to join the virtual queue is by using the existing Disneyland smartphone application. Once inside Disneyland, a visitor can go to the Galaxy's Edge section of the app to check the status of the new land. If the land is open to everyone, visitors can head straight to Star Wars: Galaxy's Edge and enter with little to no wait. As soon as the land reaches capacity, the app will reflect the new status, and prompt the user to join a boarding group to enter at a later time.

Joining a boarding group is very similar to selecting a digital Fastpass. Users first select their party from a list of people to whom they are already linked in the Disneyland smartphone app, then click to add their party to the boarding group. The app will give you your assigned boarding group and tell you what group(s) are currently being allowed into Star Wars: Galaxy's Edge.

When it's time for your boarding group to enter Galaxy's Edge, the app will send an alert to your phone, and you have up to two hours to make your way to the Black Spire Outpost. This grace period allows visitors plenty of time should they be in the middle of a ride, parade, or meal when they get the alert.

If you don't use the Disneyland smartphone app, you can also join the virtual queue by going to one of several cast member-assisted stations throughout Disneyland. There, you will scan your admission media and receive a paper pass with your designated boarding group. In-park signage at the Guest Relations kiosks will display the current boarding group, so that you'll know if it's time to head back to Galaxy's Edge with your paper ticket.

Once inside Star Wars: Galaxy's Edge, there is no time limit—you can stay as long as you wish. For now, Disney says that Fastpass will not be offered for Millennium Falcon: Smuggler's Run, and seating at Oga's Cantina will be first-come, first-serve. However, Disney did reveal that mobile ordering will be offered at some Galaxy's Edge dining locations via the Disneyland app, which will make it easier to grab a bite to eat on Batuu.