Welcome back foolish mortals to another Disney Top 5. We've been counting down my favorite things about my favorite Walt Disney World attractions. So far we've covered Peter Pan's Flight, Splash Mountain, and most recently Pirates of the Caribbean. We haven't left the Magic Kingdom yet, and we're not going to this time either. I've long shared the credo with plenty of other like-minded Disney fans that the Magic Kingdom is the true heart of Walt Disney World. I'm never ready to leave it behind when I'm down there and I'm not ready to leave it yet in this new series. So let's stay in the most magical place on Earth for a little while longer and delve deeper into one of the all-time Disney classics.

There are certain attractions that are rightly considered synonymous with Walt Disney World, and this beloved corner of Liberty Square that I'm going to ruminate on today is certainly no exception. The Haunted Mansion originally opened at Disneyland in 1969, and it was something that Walt and his Imagineers were working on for quite some time. Originally designed as a walk-through attraction, the ride we now know and adore went through many changes and alterations on its path from its beginnings as The Museum of the Weird. If it were not for the development of the ride system known as the Omnimover, we may very well have gotten more of a walking tour. The Doom Buggies gave the Imagineers the ability to drastically increase the amount of riders that were able to experience The Haunted Mansion and simultaneously allowed the ride to expand and take on a whole new life.

The Walt Disney World version was an opening day attraction in 1971. The ample space provided in Florida allowed for the show building and mansion facade to be larger and the attraction itself to be slightly longer than its Disneyland counterpart. The ride is chock full of details, age-old and cutting edge special effects, creepy sounds and voices, and, of course, 999 happy haunts. For close to 50 years, Disney fans the world over have been enjoying the thrills and chills of the Haunted Mansion. To me, it's the definition of a classic Disney attraction and one of my favorite Disney experiences in any of the parks. Let's explain why with my Top 5 things to love about the Haunted Mansion at Walt Disney's World's Magic Kingdom.

As I've been pointing out in this most recent set of Top 5 lists, music in the Walt Disney World attractions is a pretty significant component of the whole experience. I'm quite sure that people who aren't Disney fanatics will find it hard to believe that we fans actually listen to and are quite fond of the songs from the attractions. That's one of the cooler things about Disney though. Even the music from the attractions is significant. Songs were and are actually written specifically for the rides and attractions throughout the Disney parks. "Grim Grinning Ghosts," which you hear throughout your Haunted Mansion experience in different incarnations, was written by Disney legends Buddy Baker and X Atencio and it was sung by the immortal Thurl Ravenscroft—the voice of Tony the Tiger and dozens of other Disney characters scattered throughout the animated classics. 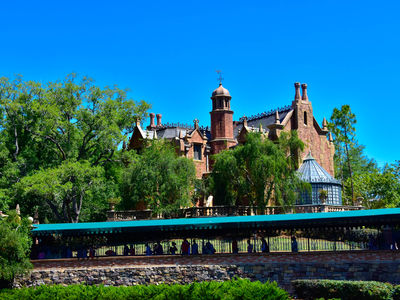 The Haunted Mansion at Disney's Magic Kingdom as seen from Frontierland across the Rivers of America. The theme song can be heard throughout the attraction. Photo by Bonnie Fink.

If you grew up watching cartoons in the 60s and 70s like I did, you'll surely recognize the voice of Paul Frees as the Ghost Host speaking to you as you make your way through the attraction. You've heard him in Santa Claus is Coming to Town, The Fantastic FourSecret Squirrel, and Rocky and Bullwinkle. You have to appreciate someone who could play Burgermeister Meisterburger, The Thing, Toucan Sam, Ludwig Von Drake, and Squiddly Diddly all in one career. "Grim Grinning Ghosts" is the perfect song for the Haunted Mansion and—like many other Disney attraction songs—it sticks in my head long after the ride is over.

When I first waited on line for the Haunted Mansion, there wasn't much of a queue to speak of. Once you got to the outer doors, there were the tombstones, but that was pretty much it. That all changed in 2011 when Disney's Imagineers unveiled a much more elaborate and interactive queuing area. Walk through and you'll encounter a wide variety of tombstones and crypts that each allow you to interact with them. Some are tributes to Imagineers. 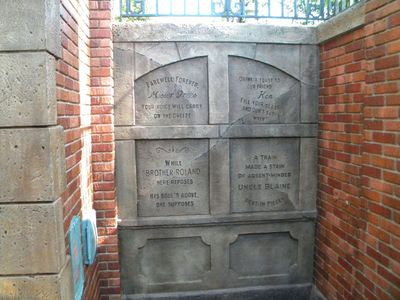 My favorite is the Composer Crypt, which features carvings of twisted instruments. Push on them and listen for the music. I'm also a big fan of the moving books and the Ravenscroft organ, which you can play and is a nod to the aforementioned singer of "Grim Grinning Ghosts." Keep in mind that the FastPass line bypasses just about all of the cool interactive features of the queue. So, if you want to see them, you may have to wait a bit. We typically don't find the Haunted Mansion too crowded too often, so enjoying the queue is a must for us.

It makes perfect sense that a mansion with such a long history would have a burial ground on its property for the beloved four legged friends that have graced the home's presence over the years. Most guests walk right by this fun detail at the end of the attraction outside of the mansion itself, built into a small hillside. 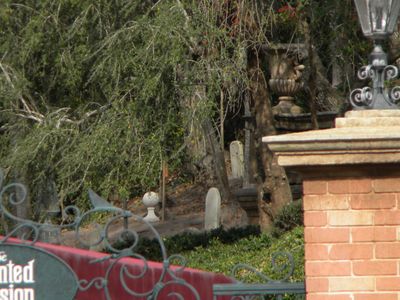 A graveyard on a hill can be seen from outside the Haunted Mansion gates. Photo by J. Jeff Kober

The reason I found it for the first time was when I heard that J. Thaddeus Toad of Mr. Toad's Wild Ride fame had a tombstone there. Look carefully. It's hard to make out, but he's definitely up there. The much-rumored epitaph? "Here lies Toad, it's sad but true. Not nearly as marketable as Winnie the Pooh." That of course is a nod to the fact that Pooh and friends took Mr. Toad's place in Fantasyland.

In 2007 one of the coolest additions to any Disney attraction emerged in The Haunted Mansion. Early on in the ride, you enter a room full of staircases going in all sorts of directions, complete with ghostly glowing footprints. 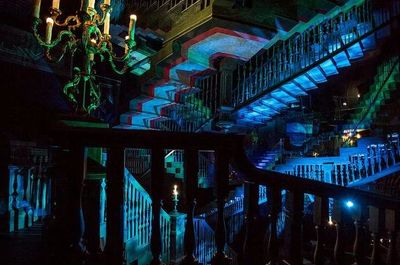 This wasn't one of those things that I read about that was coming to the mansion. These days, we seem to know every little detail before we get to experience it. When I first went through the Grand Staircase room, I was floored. I couldn't wait to get back on and ride through it again. It's creepy, disconcerting, and extremely creative. Dare I say, it's actually kind of beautiful.

There are a lot of incredible rooms in the Haunted Mansion. There's the attic and the ballroom, but to me, the king of them all and one of the best rooms in any Disney attraction has to be the final and biggest room—the graveyard. Technically, of course, you're supposed to be outside of the mansion so it's not really a room. I've spoken a lot already about Disney attractions having a big reveal moment. Emerging out of the Darling nursery and flying over London in Peter Pan's Flight or plunging into darkness on Pirates of the Caribbean and having the Wicked Wench revealed are two awesome moments that come to mind. The same can definitely be said for the moment when you slowly spin around in your Doom Buggy and head backwards into the graveyard. 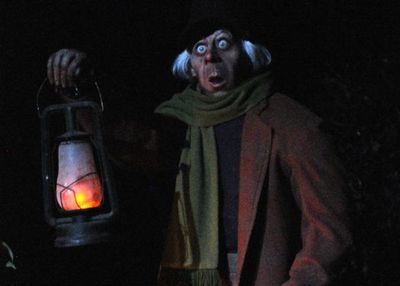 The Caretaker is one of the only beings you meet that are "alive" in the Graveyard scene. ©Disney

The aforementioned theme song now plays at its loudest and most clear. There are ghosts flying everywhere around you. You can't possibly take it all in in one shot. There's so much going on in the graveyard scene you can keep finding new things to look at each and every time you experience it.

I never get tired of The Haunted Mansion and I can't imagine I ever will. My kids feel the same way as well. When they were little, the very notion of going into anything called The Haunted Mansion simply terrified them. They soon learned that the ride and it's spooky content is pretty timid. Although, it has to be said, the startling moment in the stretching room at the beginning of the attraction continues to scare lots of little kids as far as I can tell. For Disney, the ride is a little on the dark side. Let's not forget, someone is shown hanging in the stretching room and the bride in the attic has, in fact, cut off all of her widowed husband's heads. It's not exactly Winnie the Pooh and the Blustery Day in Gracey Manor but it's good creepy fun and the scares are played for laughs.

The Haunted Mansion is literally bursting with details to look at all around you, from start to finish. It's one of Disney's most elaborately executed themes and a classic that always manages to deliver the goods.

That's all for this time. As always, I'd like to hear what you have to say. Click on the link below, let me hear your thoughts on my list and your own favorite aspects of The Haunted Mansion and I'll see you next time with another Disney Top 5.