The Tale of The Lion King comes to Disney California Adventure 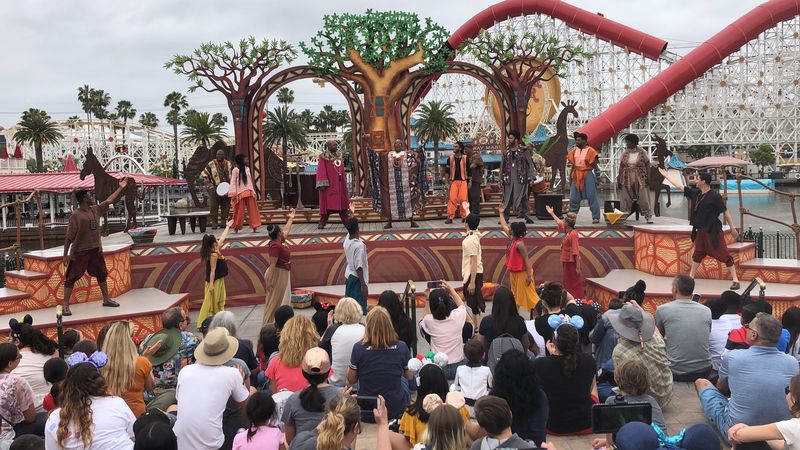 This audience up front is seated. The benches are for people with accessibility issues. The audience may stand behind or to the side of the benches. Note the dancers on the main level. Photo by Todd Pickering.

One of Disney's most beloved properties has been re-imagined as a live stage show now performing through September the 2nd at Disney California Adventure. With more Pass Holder block out dates in effect at Disneyland due to the new Star Wars: Galaxy's Edge this is a wonderful reason to head over to Paradise Gardens Park and catch this terrific performance. We were there on opening day and the audience was having a great time, especially the little ones. The musical number "Hakuna Matata" allows the children to learn some simple moves that Timon and Pumbaa teach and the dancers of the troupe are there to instruct. 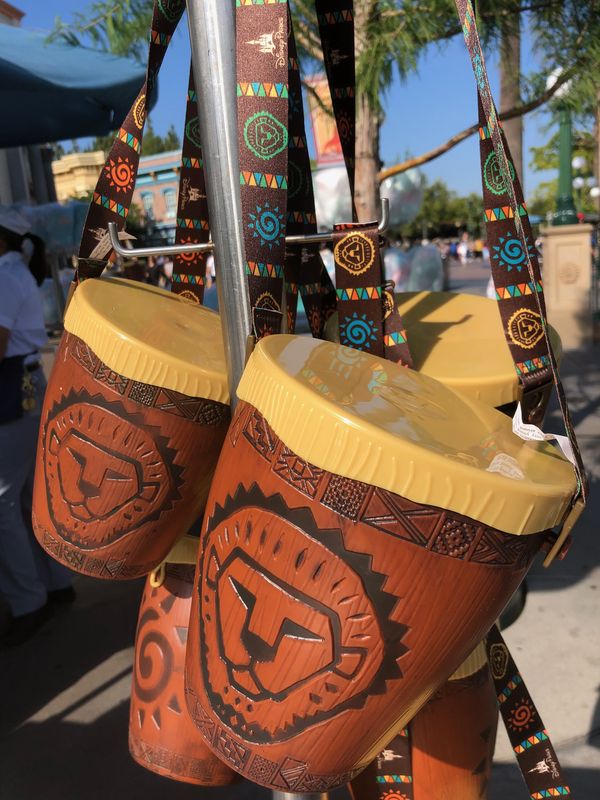 Grab a popcorn bucket that doubles as a drum and join in the fun. Photo by Todd Pickering.

You may want to purchase a Lion King popcorn bucket for $18.99 (we also saw cotton candy as a treat option to go along with this) to enjoy during the show; it doubles as a drum. Very cute and very clever. For guests with disabilities they have set up a couple rows of benches that fill up fairly quickly and the staff is efficient at controlling this. Anyone viewing in front of the benches has to sit on the ground but remember there are stairs right in front of the stage. If you have kids that love to dance it truly is a must to sit here so you may join in the fun during "Hakuna Matata".

You may stand behind the benches and the tiered platforms also behind the benches are fantastic to see the show. Hearing is not a problem as the microphones pick up things perfectly fine. Due to the dancers being in front of the stage if you do not want to sit on the ground, the top levels are better to see the choreography for certain. No matter where you are sitting or standing wear your hats, cover ups and make sure there is plenty of sun screen.

It's hard to predict how the crowds will be for this show once word gets out but we saw people sitting as early as a half of an hour before show times. That brings us to the very important tip that we are always pushing and that is to pick up that Entertainment Guide at the front gates or to the kiosk by the ATM to your right upon entering Disney California Adventure. Custodial staff generally carry maps and Entertainment Guides. You may also pick these up at information booths with the most visible one being in Carthay Circle just behind the fountain with the giant wait time board. 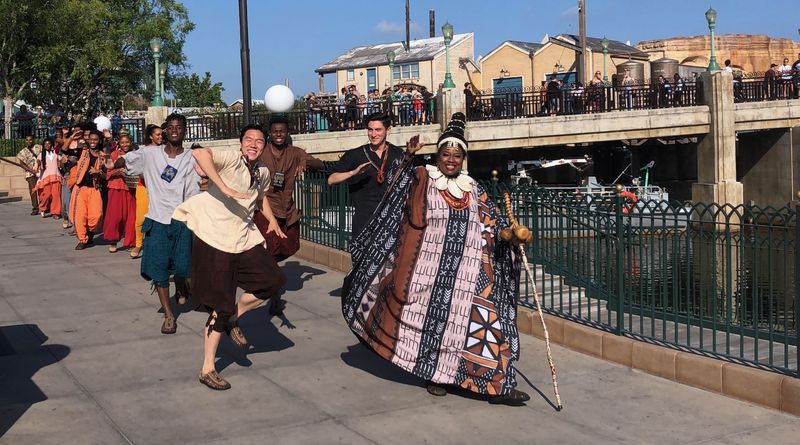 The Storyteller leads the troupe onto the stage at Paradise Gardens Park. Photo by Todd Pickering.

Much like the loose source material of Shakespeare's Hamlet that The Lion King is based on, this production has a group of Storytellers (much like The Players in Hamlet) arriving from the Pride Land to share this tale. This production shares the excitement of live performance not unlike the Royal Theatre's productions of Beauty and the Beast and Tangled over in Disneyland. In the tradition of The Lion King stage show, Rafiki was played by a woman and she sure had the pipes to hit all of the gorgeous opening calls of "The Circle of Life." She was just called the Storyteller in this production with no mention of actually playing the part of Rafiki.

While the opening choreography was simple and evoked the animals bowing down to the new cub Simba, it was clear that these dancers were on point and we were in for some great dancing. Instead of holding up a cub at the end of the song, the Storyteller presents a book of The Lion King. What a great way to start a show and put forth the message that great storytelling often starts with a book. There is also a wonderful peppering of Swahili throughout the show and the troupe speaks in African accents. We cannot attest to the authenticity of these accents but it provides a richness and all the actors sound alike which makes for a congruous sound on stage. The actors were still finding their way on opening day but clearly had strong direction and we saw a marked difference from the early shows to the later shows.

Disney's technical team is amazing and it is a serious job to get the sound levels just right on all of the numbers. Also with using a recorded track poses some problems with dialogue. For example the actor who plays Mufasa has a monologue within a song and his command and sincerity of delivery was fantastic but there was a lag between the finish of the monologue before the number moved on. This is an example of tightening cues so the show's pacing remains moving forward. These cues will get tighter with each performance as the actors and the technicians hone their crafts. 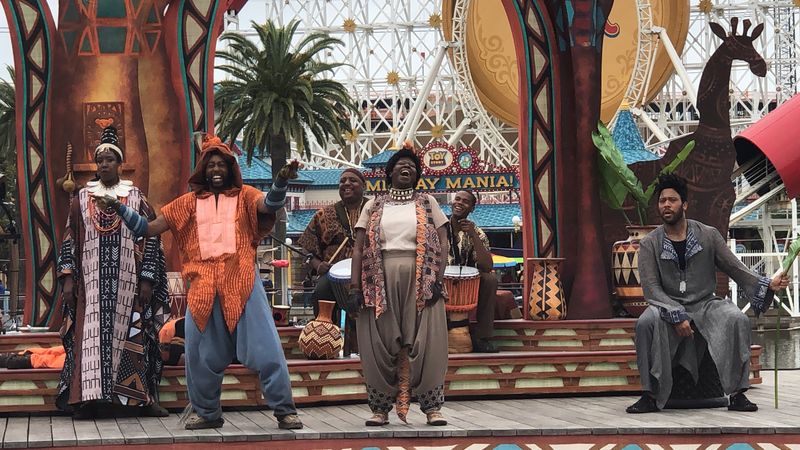 Pumbaa and Timon crack jokes as the cast looks on. Photo by Todd Pickering.

Despite the more confined structure of a recorded track, the musical arrangements may be the biggest highlight of the show. One of the joys of seeing a show re-imagined is getting a new take on the material. (There is a reason that people have seen Hamlet 20 times) The original scoring of this live show is fantastic. "Hakuna Matata" doesn't have the ability like in the movie to fade out the music for a transition so we get the shear delight on the live stage of having a beautiful button at the end of the song with Simba, Timon, and Pumbaa singing three part harmony. "Can You Feel the Love Tonight" is closest to the original song, but seems to have some lovely vocalization. The three drummers add energy and you can see the little ones mesmerized by the constant drumming. A fantastic touch. 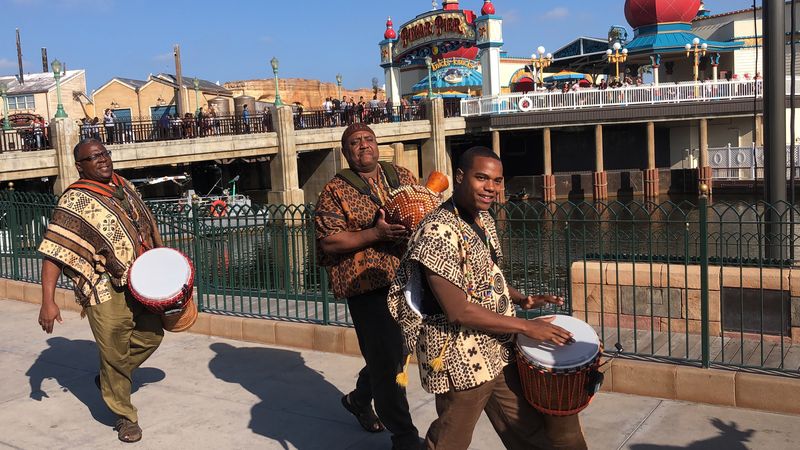 The vibe of live percussion attaches to the beating of your heart. Nothing can beat live performance. Photo by Todd Pickering. 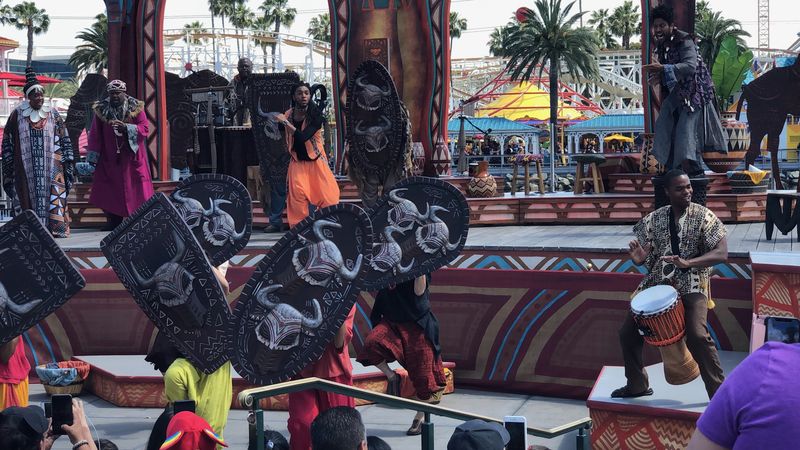 The wildebeest stampede is one of the most clever bits of choreography, properties, and direction. Photo by Todd Pickering.

The choreography is a highlight of this show since Frozen over at the Hyperion Theater has very little opportunity to showcase dancing. The dancers' energy really keeps this production alive from the stately opening number to the beautifully staged stampede using shields with wildebeests on them. The crisp precision of these two numbers really complements the acting and storytelling. The high energy of the finale is when the dance troupe really shines. Infused with the music and high energy moves of traditional African dance you can see that these people aren't just hitting marks but the love of the craft and energy they produce is palpable. Kudos again for Disney putting more dancing in the parks. 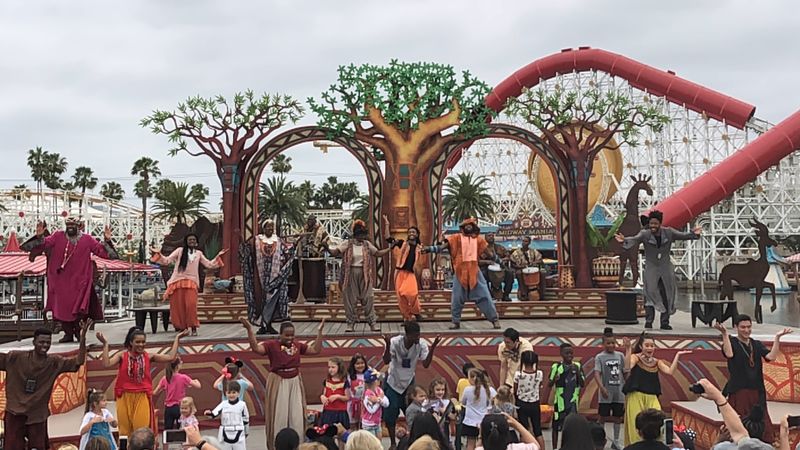 For the kids the highlight of the show is getting up to help perform "Hakuna Matata." Photo by Todd Pickering.

The costumes are absolutely beautiful and very representational rather than literal. When your lighting design comes from the hot California summer sun, the costumes become even more important. The dancers' outfits at first seemed a bit too simple but when you see them in motion the different color combinations make for a very pleasing look with an ever shifting of colors. The Storyteller's robe with a gorgeous pattern commands the stage; Mufasa's simple crown and stunning fuchsia coat denotes royalty; and the simple wraps quickly transform two people into hyenas.

Simba sports a bright orange outfit that makes him stand out from everyone else, and sports a beautiful mane of braided hair. The Lion King mantle is a neck piece made of feathers and other fabrics to give it an amazing richness. This actor playing Simba had such a fantastic energy and delight. He was singing and dancing not just with his body and voice but truly took time with each beat change and yet moved the show forward. 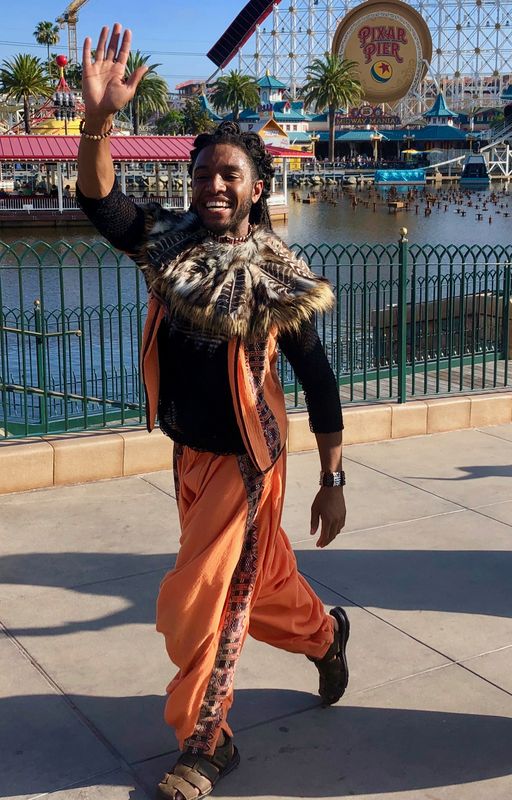 Nala also matches Simba with orange accents and sports a stunning headpiece at the end that bursts with color to represent a crown. This actress had a clean and clear voice keeping the notes pure without adding too much extra to detract from the score or song. She was truly connected to the music. 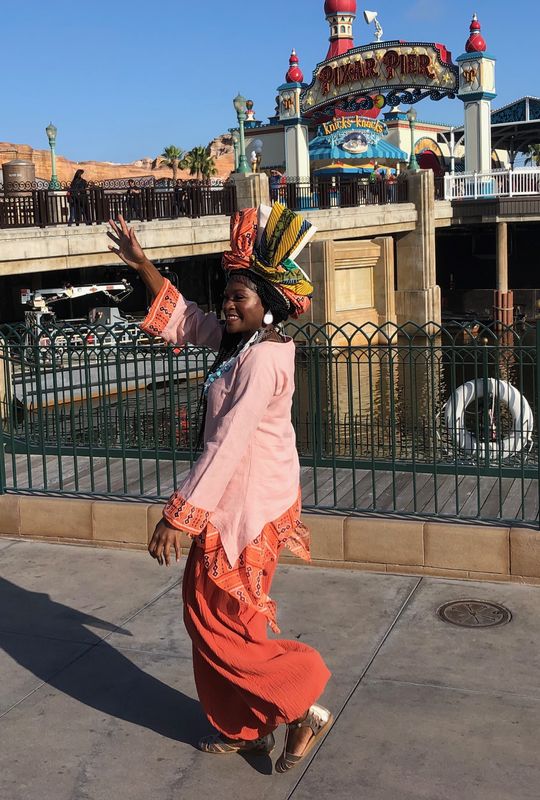 The exquisite detail of the fabric on the cuffs and headpiece echo the piece around the waist. Photo by Todd Pickering.

Scar's tunic is tattered as if it has been clawed at, and he sports a vest with an angry, busy pattern on a slight deep rich natural eggplant color to represent his manic need for power. This actor definitely improved as the day went on getting more comfortable with his deeper bass notes and finding the breath and connection in "Be Prepared." 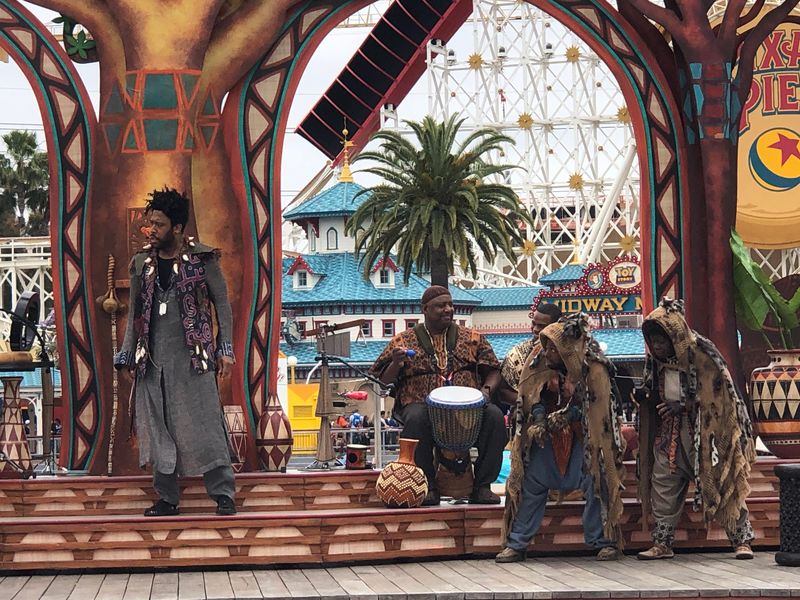 Scar, drummer, and the two hyenas, who are played by the actors that play Pumbaa and Timon. Photo by Todd Pickering.

One of the delights of the show is that the cast makes an exit and an entrance by promenading to and from the pier that leads onto Pixar Pier. Providing you did not catch the last show of the day it is definitely worth it to return during the top of the show to stand off to the side and catch some great pictures. If you have little ones in tow, waving and making eye contact with the performers is a thrill to be remembered. 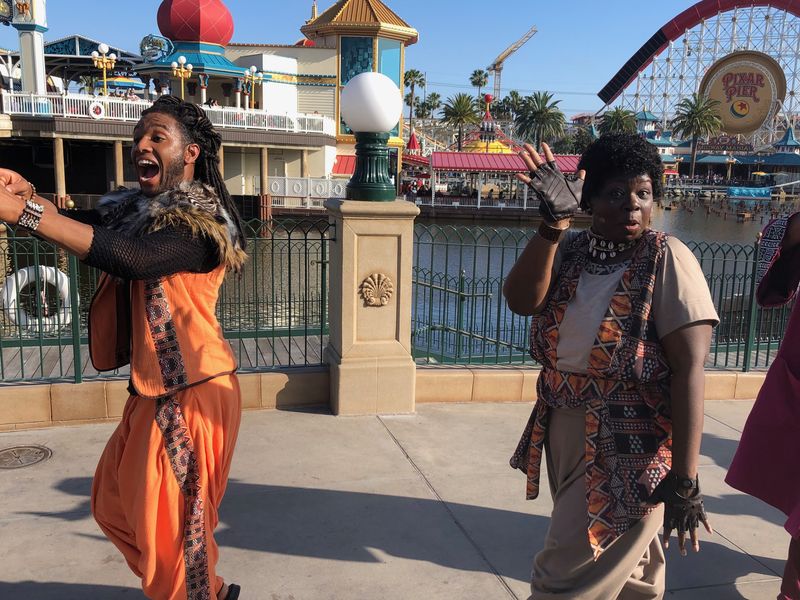 The delight and effervescence of Simba and Timon is shared by all of the cast and musicians. Photo by Todd Pickering.

A theatrical piece is at its best when all elements work together and complement each other. The best example of this is the delightful mash up of "I Just Can't Wait to be King" and "Be Prepared." The character of Zazu is cut for brevity and Simba brags to his "weird" Uncle Scar about being the new king one day. Then Scar starts singing "Be Prepared" and not only do they mash up the songs but the dancers divide into Simba factions and Scar factions. The choreography for Simba's dancers is upbeat and high energy while the choreography for Scar's dancers is delightfully diabolical with gorgeous poses and undulations. These dancers' extensions and ability to inhabit their bodies are especially apparent in this number. The sound, staging, and dance are a perfect example of music, direction, and choreography all working together; this makes for another success for the Disney Parks.