Hopefully by the time you read this I will have already enjoyed Toy Story 4 at my local cineplex. Considering this is opening day and considering the fact that I've never missed a Toy Story film on the big screen, I certainly don't anticipate missing this one. The early reviews have been pretty impressive so far for the latest Disney/Pixar release. Not that I'm one to pay attention to the critics. I'm pretty sure the folks at Pixar aren't going to let me down on this one. They haven't disappointed me yet in the Toy Story universe so why start now?

As I continue on my in-depth tour of the Walt Disney World theme park attractions, I find myself still in the Magic Kingdom, thinking about one of the big stars of Toy Story, everyone's favorite and coolest toy, Buzz Lightyear. After the release and overwhelming success of Toy Story in 1995, main characters Buzz and Woody became instant stars so it was a no brainer to expect a Toy Story related attraction in the Disney Parks. Buzz Lightyear's Space Ranger Spin opened in Magic Kingdom's Tomorrowland in 1998 and it's been a headlining attraction drawing big crowds ever since. Buzz's star obviously shines brightly because a version of Space Ranger Spin has made it into each of the Disneyland style parks throughout the globe. Hong Kong Disneyland is now the only park without one. Their version known as Buzz Lightyear Astro Blasters shuttered in August of 2017 to make way for the recently opened Ant-Man and The Wasp: Nano Battle attraction.

I'm not sure if every guest understands the fact that as make your way through the Space Ranger Spin queue and arrive at the room just before boarding, you are being "shrunk" down to the size of an action figure—much like Buzz himself—in order to partake in your adventure. Thus, the giant View-Master. I'm hoping that when I say that name you all know exactly what I'm talking about. Am I right in assuming that the View-Master has transcended generations? I had them as a kid. As a matter of fact, I still have mine and I've let my kids play with it. I also have several vintage ones that I have collected over the years like the classic one in the image below. 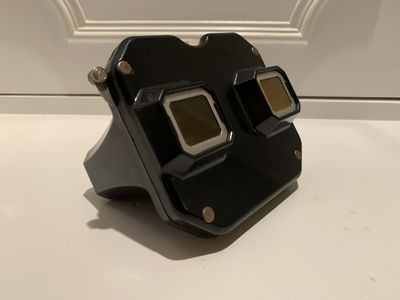 One of my vintage View-Masters is a bit older than the one in the Space Ranger Spin queue. You can't see it, but I have the Disneyland's Fantasyland reel loaded (one of my favorites). Photo by Chris Barry.

My favorite reels were always the Disney ones, of course. View-Master is one of those classic nods to the past that Toy Story has become famous for and its inclusion here at the end of the Space Ranger Spin queue has always made me smile. In Disneyland, I understand it's an Etch-A-Sketch, equally as awesome a throwback as the View-Master and equally appreciated, I assume, by every age group.

Walt Disney World attractions are full of amazing rooms that tend to really define the attraction: the final room in it's a small world; the "Wicked Wench" room in Pirates of the Caribbean; and flying over London in Peter Pan's Flight. As far as Buzz Lightyear's Space Ranger Spin is concerned that room, at least for me, is Planet Z. 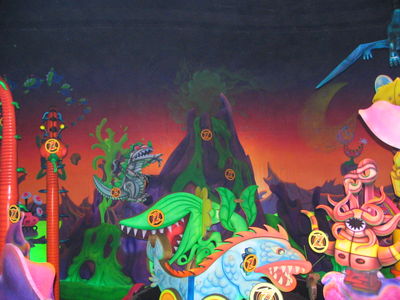 Sights and sounds are plentiful when you land on Planet Z in Buzz Lightyear's Space Ranger Spin. Photo by Brian Bennett.

This is the room with the volcano and all of the odd space creatures, animals, aliens, fish, and so much more all around you. There's an incredible amount of things to look at while you're attempting to blast away at "Z" targets. I know it's a lot to ask, but next time you're flying through, take a moment to look around you. It's an impressive room. The colors and details are just incredible. It's the best room in the attraction.

One of the things that makes Buzz Lightyear's Space Ranger Spin such a repeatable attraction is the fact that the outcome in regards to points earned and your rank on the space ranger scale can differ with each experience. I'm not a very competitive person. I'm more in it for the fun. That said after 16 years, I'm still trying to beat my wife's ranking on this attraction. I'm not sure what she does exactly, but she blows my score away each and every time we ride together. 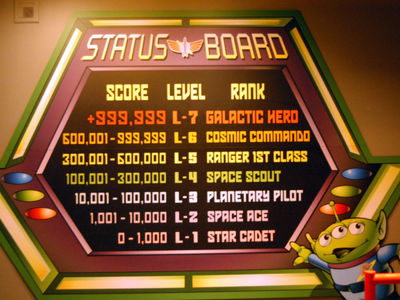 For some reason I don't think I've ever risen above Level 4 on Buzz Lightyear's Space Ranger ranking board. Photo by Adrienne Vincent-Phoenix

It's embarrassing really because it's not like I'm a Level 3 Planetary Pilot and she's one level above me, a Level 4 Space Scout. It's more like she's always a Level 6 Cosmic Commando and I'm always trailing way behind. Once again, I'm in it purely for the fun, but it's been a nice ongoing joke in our family that Mom always, quite literally, blows everybody else away on the ranking board.

One of my favorite things in any Disney attraction is an impressive animatronic figure. If I had my way, projection would never win out over a fully realized three-dimensional figure. I realize it's more expensive, but that's the Disney difference and it dates back to Walt Disney himself. That being said one of my favorite Disney animatronics has to be the Buzz Lightyear animatronic figure standing in the queue next to the giant View-Master mentioned above. 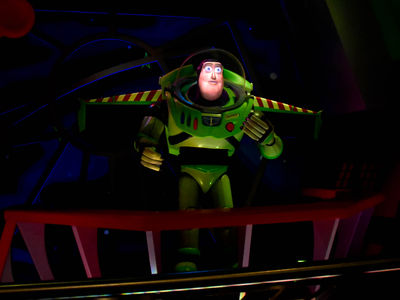 You'll find Buzz Lightyear in the queue of Buzz Lightyear's Space Ranger Spin. He's giving a mission briefing before you board your XP-37 Star Cruiser to defeat Zurg Photo by Bonnie Fink.

He's got great movement, but still moves like I would expect a Buzz toy to move. He's not completely fluid like a person, nor should he be—he is a toy after all. I'm also a big fan of the projection face. I think it allows for much more expression. This was the first time I ever saw the projection face that has become a pretty standard thing in the world of modern Disney animatronics and it still stands up in my eyes. How cool must it be for a little kid to enter that room and see a huge moving talking Buzz Lightyear right there in front of their eyes?

That's one of the amazing things about Buzz Lightyear's Space Ranger Spin: everybody loves it! That's not a guaranteed thing in my family. I'm pretty much the only one that loves Pirates of the Caribbean. My boys are still hesitant to go on Space Mountain, but my wife and I and our daughter love it. I could go on and on that way about dozens of the Disney attractions, except for a small handful and Buzz Lightyear fits into that very special category. It's a total crowd pleaser. I can point to such a wide variety of ages and personalities that I've been on that ride with. Everyone from my mom in her 70s to our current youngest in my extended family who was three, everyone seems to love it. 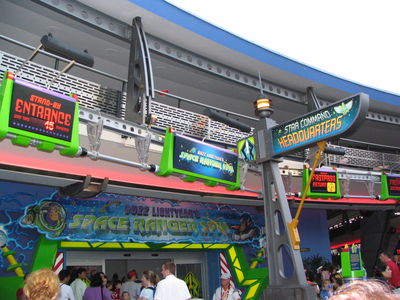 Walking into Star Command seems to make just about everyone happy. Photo by Brian Bennett

Last year I chaperoned a high school music trip to Walt Disney World. Jeffrey was a fairly typical high school 17-year-old boy. As we were walking around the Magic Kingdom, he wasn't really buying into the whole magical Disney thing just yet. He had never been and I think he was a little "too cool for the room" if you know what I mean. Then we took him into Buzz Lightyear and boy did that work. He dropped the tough guy teenager thing and reverted to the little kid that was obviously dying to be released. From that point on, he was a smiling, giggling fool and he proceeded to have the time of his life. He had Buzz to thank for that.

Buzz Lightyear's Space Ranger Spin is really a modern classic. It's a ton of fun and the visuals are truly amazing. It's an explosion of wonderful blacklight and Day-Glo, sci-fi sounds and non-stop action that occupies its own niche in Walt Disney World. There's nothing else quite like it and if the goal of being at Disney is to get in touch with your inner child, then blasting off to help Buzz defeat Zurg definitely delivers every time.

That's all for this time. As always, I'd like to hear your opinions. Click on the link below, let me hear your thoughts on Buzz Lightyear's Space Ranger Spin and I'll see you next time with another Disney Top 5.