Everybody Get Your Ears On

Everybody get yours ears on.

That's not just a statement, it's a way of life for we Disney fans. Disney's latest marketing slogan has been blaring, earworm style, on our TV screens the last few months and has been playing at Walt Disney World's Magic Kingdom as the theme song from the the Move It! Shake It! MousekeDanceit! Street Party.

Everybody get your ears on is a mantra about living the Disney lifestyle and letting that Mickey magic wash over you whenever you visit the Disney Parks. It also harkens back to that set of ears that has, over the last six plus decades, become the most iconic of Disney merchandise. 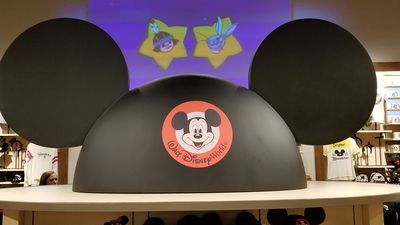 From (admittedly not so humble, nationally televised) beginnings, they started out as a simple black silhouette with a Mickey Mouse Club logo in the center and have grown over the years to the point you can get mouse ears depicting pretty much any part of the Disney universe. Let's take a quick walk through mouse ears history and then let's see what's available today.

Roy Williams was hired as an artist in 1930 by Walt Disney, himself. He worked on animated shorts for the company and developed story ideas, so he was originally hired for his creative skills. Those came into play when we was cast on the original Mickey Mouse Club in 1955 and became "Big Roy," the first adult Mouseketeer. He was the big lug on the show that all the kids gathered around.

Getting back to the mouse ear hat, the legend goes that they were deciding on the costumes for everyone to wear on the show. Roy was the one that came up with the idea to have everyone sport a pair of Mickey Mouse ears. He was inspired by the 1929 black-and-white Disney short, "The Karnival Kid," which had a scene in which Mickey tipped his ears to Minnie. Roy developed the design, which was a simple round felt cap with two plastic circles attached.

The kids, Roy, and Jimmy wore them on every episode. They became immediate cultural touchstones, and kids (and adults) had to have them. Luckily, Walt had just opened a little theme park in Anaheim, California, and these went on sale. They were instant sensations, and no Disney Park visit was complete without an ear hat souvenir with one's name across the front. Disney Parks went on to sell these for decades with very few changes.

In the 1980s, the traditional ear hats were supplemented with headband versions. You could downsize a bit and be a little more hip by buying a simple plastic headband with large Mickey or Minnie ears attached. 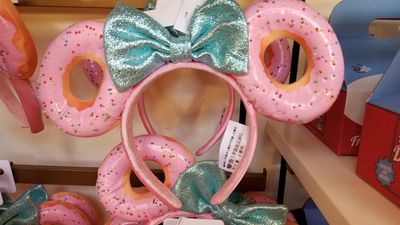 Mickey ear headbands have emerged in many forms (including some that makes you hungry). Photo by Gregg Jacobs.

There wasn't a lot to tell on the mouse ear hat front until the Disney decade of the 1990s, which brought a huge renaissance to all things Disney. I hesitate to compare day-glow mouse ears to Michelangelo's David, but for Disney fans, it was almost like that! Disney seemed to realize it had a lot of avenues to exploit on the merchandising front. This was also the era when words like franchise and synergy got momentum as buzzwords in the halls at Walt Disney Studios. They realized the formula of beloved characters + beloved souvenirs = lots of money.

We suddenly saw an explosion of different plays on the traditional ears. Over the years, I've seen ears with that conical hat with the sash on top or with tiaras in the middle to remind us of the princesses. When Star Wars joined the fold, we saw hats with the top of R2D2's head crowned with Mickey ears. 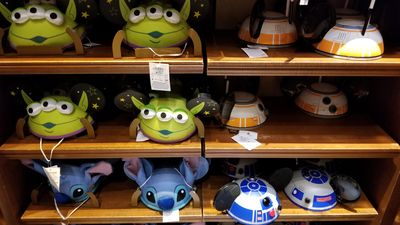 You can get mouse ear hats with R2D2, Stitch, and others. Photo by Gregg Jacobs.

Pixar films got in on the act, too. You can get mouse ears depicting Lightning McQueen from Cars or Wall-E and Eve from Up. Walt's original creation, Oswald the Lucky Rabbit, also got his own hat with his signature extra long ears. 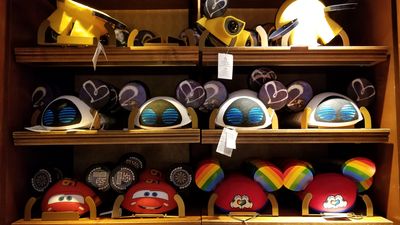 There are ears for a variety of Pixar characters as well as for Pride. Photo by Gregg Jacobs.

As with many Disney collectibles, some ears are created as limited editions or only if you're a passholder or member of the Disney Vacation Club. 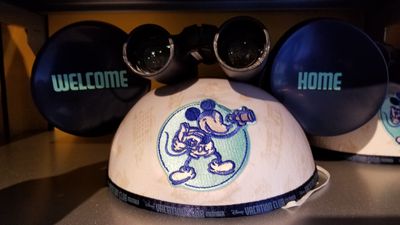 DVC members can purchase this special hat with binoculars. Photo by Gregg Jacobs.

Disney also did a fun thing by inviting guests to put their own spin on the mouse ear hat. At Fantasy Faire, the shop outside Mickey's Philharmagic in the Magic Kingdom, there was a display of these creations. People added pins, ribbons and other items to the hats. It was interesting seeing people putting their own spin on a classic. 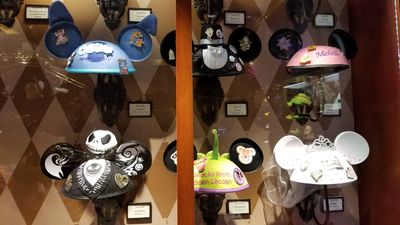 Disney has invited guests to put their own spin on traditional mouse ears. Photo by Gregg Jacobs.

The special hats are typically $19.95, although more elaborate hats can run as high as $29.95. You can purchase them all across the Disney resorts as well as at the Shop Disney website.

The ears have also turned up in different forms over the years.

A few years ago, Disney came out with a series of holiday "ear hat ornaments." They're relatively small, made of ceramic, and look like mini ear hats. There are dozens of them for sale now featuring all aspects of Disney. My purchase from this series was one of Pluto, appropriately with reindeer antlers and wearing traditional mouse ears.

Following the idea of pets, now even your dogs and cats can get their ears on. Disney Tails at the Disney Springs Marketplace Co-Op and most of the Emporium-type superstores at the theme parks sell traditional mouse ear hats that have a chin strap to hold them on your pet's head, or ears of the headband variety that slip over dog or cat ears. 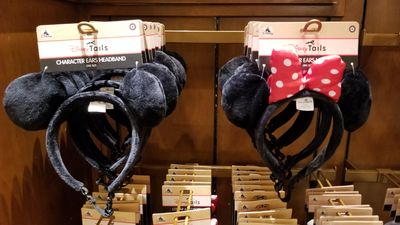 Even pets can get their ears on. Photo by Gregg Jacobs.

On a more personal note, ear hats have played a part in some key moments of my own life. For my 40th birthday, a close group of friends, who know what a Disney fanatic I am, surprised me with a birthday breakfast at our favorite local diner, and they all were wearing—you guessed it—traditional black Mickey and Minnie mouse ear hats. I, of course, got to wear one, too. I'm sure we were quite a sight to people enjoying their Sunday breakfast.

When I got married, the same group took me on a surprise bachelor weekend. When they picked me up, they gave me a set of mouse ears with a top hat, ruffled tux, and a flower that I was told to wear for the full weekend. 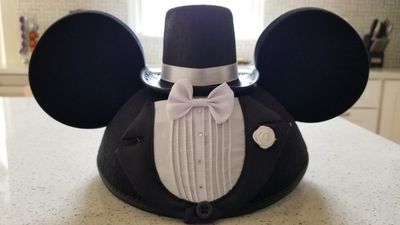 I got this pair of wedding mouse ears for my bachelor weekend. Photo by Gregg Jacobs.

When each child born into our family is old enough, we also head to the Chapeau on Main Street U.S.A. in the Magic Kingdom, get a pair of mouse ears, and take a picture, usually in the stroller, of the kid wearing the hat. These are very sentimental, and when the child reaches their teenage years, as my nieces have, they also become good blackmail material.

Even with all the different kinds of ears now available, there's still something kind of special about the original. You can walk into one of several locations, get your black felt cap with the plastic ears, and for a few bucks, have a name embroidered on it. 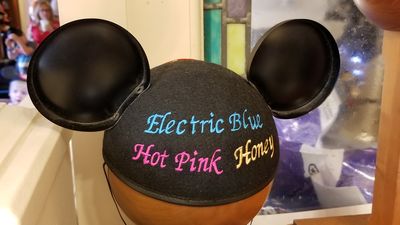 You can still get your name embroidered on a mouse ear hat. Photo by Gregg Jacobs.

Just to the right of Town Hall in the Magic Kingdom and at a few other locations, they still sell these plain hats for $17.99, and for an additional $4.99, you can get your name embroidered on the front ($7.99 if you want more font choices and fancier colors). They aren't necessarily cheap, but aren't terribly expensive, either. They've become a part of my family history and I'm sure the same is true for many of you fellow Disney fans.

I've spent the last few years here on Mouseplanet talking about all different kinds of merchandise, whether it be the kind you can wear, sit on, or even eat. It's all awesome—but the mouse ear hat is one of those classics that ties you all the way to the beginning when a Mouseketeer named Roy introduced them to the world.

Thanks for reading and see you real soon.