Monday's no-reservations-required opening day for Star Wars: Galaxy's Edge at Disneyland continued the trend we've seen over the past month, with lighter-than-feared crowds turning out to visit the new 14-acre expansion. This sn't to say that Galaxy's Edge isn't extremely popular, just that Disney's publicity engine seems to have worke,d perhaps too well in keeping massive crowds at bay.

Star Wars: Galaxy's Edge reached capacity by 8:24 a.m. on opening day, prompting Disney to put into use the virtual queue designed for the new land. By all reports the system worked extremely well, and crowds dropped off enough that Disney discontinued the virtual queue around 5:30 p.m. Monday night, making the land open to all with no wait.

Manageable crowds are great news for fans who did make the journey to a galaxy far, far away, but it isn't quite the stress test of the new land and the related infrastructure that Disney managers may have hoped for, especially as it looks to the August 2019 opening of the second Galaxy's Edge at Walt Disney World.

One day of operation is not enough to create a comprehensive strategy, but we have some take-aways from opening day to share with you as you plan your first or next visit to Batuu. We hope these tips, combined with our Batuu Boot Camp, Take 2 , will prepare you to make the most of your time at Star Wars: Galaxy's Edge this month.

Reservations are required to visit both Oga's Cantina and Savi's Workshop. You must use the Disneyland smartphone application or Disneyland website to book a same-day reservation, with reservations opening at 7:00 a.m. each day. Reservations are not available in person, and there is no standby line at either location. On opening day, all spots at Savi's (the shop where you can purchase your custom-build light saber) were claimed within 17 minutes, and Oga's sold out shortly thereafter.

If you're trying to book both locations, we recommend making your reservation at Savi's first, then planning your Oga's visit around that. Keep in mind that you have just 10 minutes to complete your online reservation, so have your credit card number handy, along with the names of everyone in your party.

If Oga's Cantina and/or Savi's Workshop are booked when you try for a reservation, all is not lost. Keep checking back on the Disneyland app or website throughout the day and you may be able to pick up a reservation that someone else canceled. On opening day, reservation times keep popping up, so it's worth checking back. 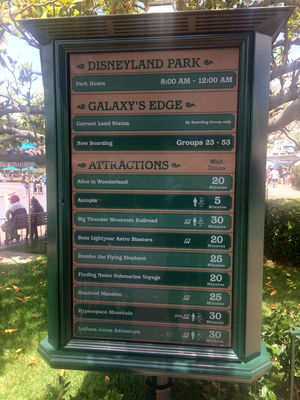 Disneyland wait times were surprisingly low on the opening day of Star Wars: Galaxy's Edge. While the new land was at capacity, popular rides had waits of 30 minutes or less. Photo by Todd Pickering.

This advice may change if larger crowds begin to show up to visit Star Wars: Galaxy's Edge, but for the immediate future your best play may be to let the crowds rush the gates of the Black Spire Outpost, while you take advantage of shorter lines in the rest of Disneyland. While the Millennium Falcon: Smugglers Run sported a three-hour line shortly after park opening on Monday, E-ticket attractions like Space Mountain and the Matterhorn Bobsleds were basically walk-ons. If you have the patience to wait to visit later in the day, you stand to see more of Disneyland than you may have expected. 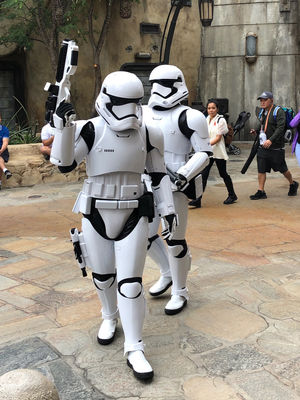 Needless to say, the folks who just had to be among the first to board the Falcon had the longest wait times, while those who were content to wait it out got to board much faster once they joined the queue. Use the Disneyland app to keep an eye on wait times while you're in the land, so you're ready to step in line once the opening crush thins a bit.

If the virtual queue for Star Wars: Galaxy's Edge is in use when you arrive at Disneyland, you can use the Disneyland mobile app to request to join a boarding group. If you link the theme park tickets of everyone in your party together on the app, you can request the same boarding group for your entire party. 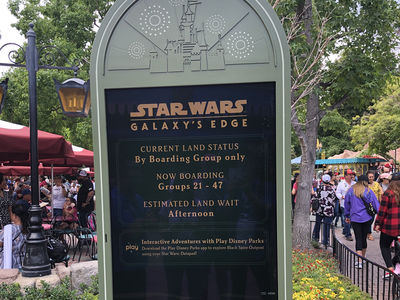 Digital display boards inside Disneyland show which boarding groups have access to the land at that moment, but not how long they have before their pass expires. Photo by Todd Pickering.

If you use the app to get a boarding pass and enable push notifications, you 'll get an alert when it's your time to enter Star Wars: Galaxy's Edge. You have up to two hours to enter the land after your boarding group is called for admission, so you don't need to leave a show or exit a ride queue when you're called. In fact, the push notifications sent on opening day even said there was "no rush" to return to Star Wars: Galaxy's Edge.

If you do not enable push alerts, you'll need to keep checking the app to see which groups are boarding at any given time. However, the app does not display what time each group was called, nor how long they have remaining of their two-hour entry window, so you'll need to stay on top of it.

If nobody in your group uses the Disneyland app, you must show your park admission ticket to get a boarding group at many Fastpass locations, including the Haunted Mansion, Indiana Jones Adventure, Space Mountain, Splash Mountain, and near the Matterhorn Bobsleds. 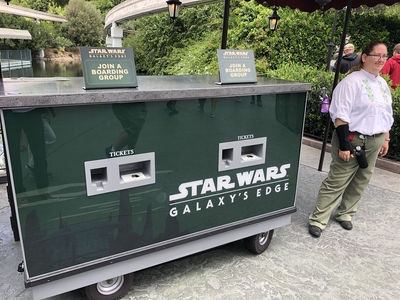 Kiosks around Disneyland can distribute a paper boarding group pass tfor visitors who don't use the Disneyland app. Photo by Todd Pickering.

Without the Disneyland app, you'll want to check in-park signage frequently to see which boarding group is currently being admitted to the land. There is one sign each in Tomorrowland, Fantasyland, Main Street, U.S.A., Critter Country/New Orleans Square and at the Frontierland entrance to Star Wars: Galaxy's Edge.

Again, these signs display which groups are boarding at the current time, not what time each group was called—nor how long they have remaining of their twp-hour entry window. Once your boarding group appears on the sign, head over to Star Wars: Galaxy's Edge so you don't miss out.

#7 – Use mobile order to skip the line at mealtime

Ronto Roasters and Docking Bay 7 Food and Cargo both offer mobile ordering via the Disneyland app, which is a great way to save time while you're at the Black Spire Outpost. You can place your order whenever you want—say, while standing in line for Millennium Falcon: Smugglers Run—and then pick it up whenever you're ready to eat.

#8 – Single rider your second ride on the Millennium Falcon (and third, and fourth)...

This tip comes about as a result of a reader question via Twitter. Nikko Shaw wrote, "I’ll be going to Disneyland on my own in July. Should I go early in the morning and wait in the regular queue for the Millennium Falcon to experience it, or does the single rider line see the same things? Thanks in advance!"

We asked other readers for their experience, and the general consensus was that first-time riders should absolutely go through the standard queue to see all of the pre-show elements, theming, and the incredible Hondo Onaka animatronic figure. After that, most readers suggested using the Single Rider line for subsequent rides, though some warned single riders are likely to be assigned to the engineer or gunner roles.

#9 – Catch the fireworks over the Millennium Falcon

Disneyland's nightly fireworks take on a completely different look when viewed from inside Star Wars: Galaxy's Edge, where there is no musical accompaniment to the show. Find a spot in front of the Millennium Falcon and enjoy the show.