In the hot summer month of August 1969, something chilling descended on Disneyland. A new attraction opened its creaky doors in New Orleans Square and guests immediately fell in love with the residents that had moved into the new mansion. The Haunted Mansion, the brainchild of many of the most talented and legendary Imagineers, was a unique attraction at the time, featuring new technologies, especially the "Omnimover" vehicles (Doom Buggies). Now, 50 years later The Haunted Mansion is still going strong, having inspired attractions of the same name at Magic Kingdom (in 1971) and Tokyo Disneyland (in 1983), and two similar attractions, Phantom Manor at Disneyland Paris (in 1992), and Mystic Manor at Hong Kong Disneyland (in 2013), and remains one of the most beloved attractions at Disneyland.

As August 2019 is soon approaching, so is the 50th anniversary of The Haunted Mansion. To celebrate and honor this momentous occasion, Disneyland has opened a small art exhibition/gallery in the Opera House on Main Street, U.S.A. at Disneyland park. 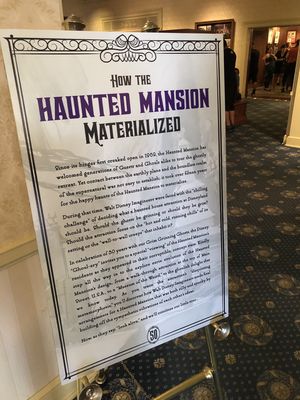 Featuring a collection of concept art and maquette statues, the gallery is a fantastic look "behind-the-scenes" at the planning and creation that went into this beloved attraction. Each art piece showcases an original concept from when the Imagineers were coming up with the ride structure and narrative. The most interesting part about this exhibit is that many of the concept art pieces on display is for ideas that never actually made it into the attraction. It's an incredible peek into the minds of some of the most creative Imagineers that Disney has ever had. 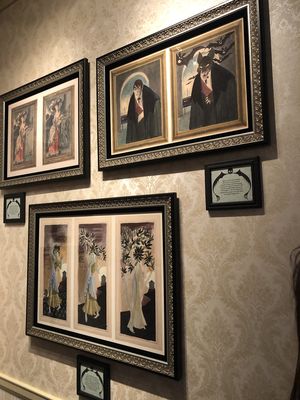 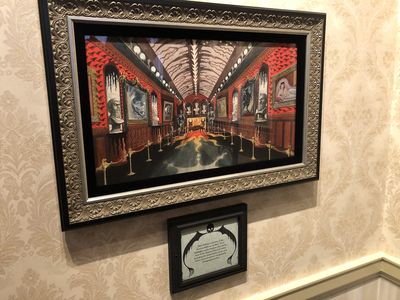 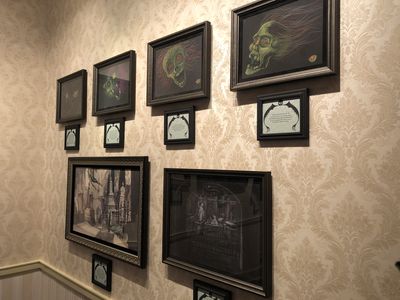 It's also incredibly interesting to see how things changed from when they were planning the attraction to what actually made it into the finished version. For example, the "Black Widow Bride" Constance, was originally supposed to be more of a victim, and the piece below from Marc Davis even showed her losing her own head, instead of the other way around as is now. 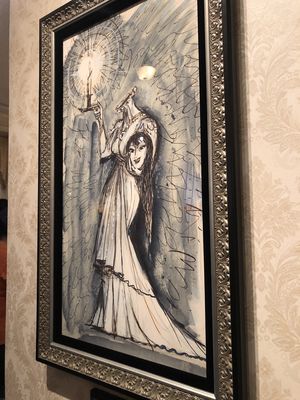 Another example of some the pieces showcased in the gallery is the original plan to have the narrative be centered on an old sea captain, which didn't make it into the final version of the attraction, but is still heavily hinted at in certain aspects of the attraction (like the weathervane on the house itself). 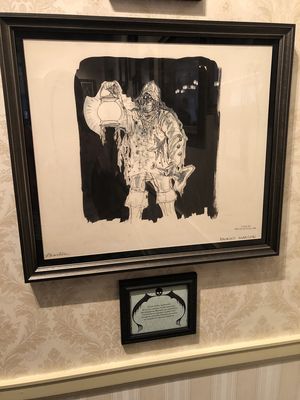 One of my favorite pieces in the gallery was the original concept for the ballroom scene, which had guests traveling almost around it, instead of just past it as it is now, and also included a spooky ghost band that would have come out from behind the curtains when it was showtime. 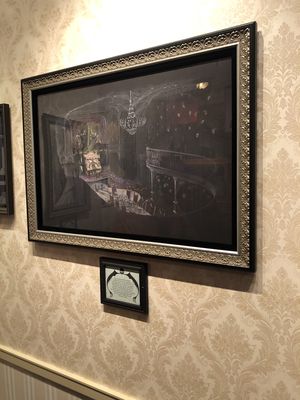 Another fun aspect of this gallery are the maquette statues, which would have been the original physical concept for any of the figures or statues seen in the attraction. 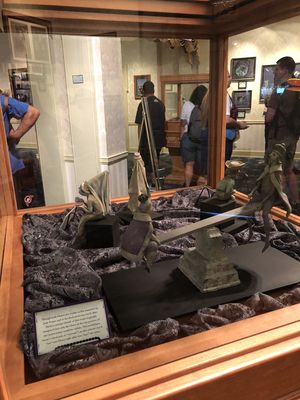 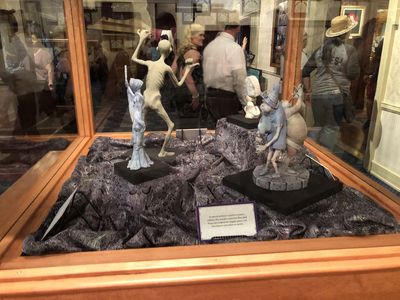 My personal favorite is the graveyard's caretaker and his scared, but loyal, canine friend. They've always been one of my favorite parts of the attraction and it was pretty incredible to see them in their original state from creation. 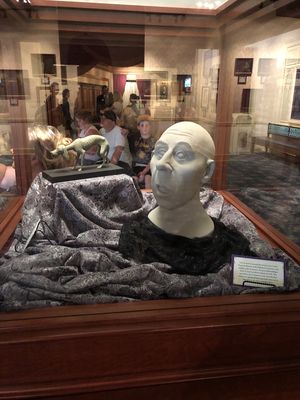 Of course, none of this amazing and beautiful concept art would have existed if not for the incredible minds they came from. The Haunted Mansion featured a team of Imagineers that was perhaps the best ever on a single attraction, any Disney fan will recognize most, if not all, of the names of the folks who worked on the attraction and it's all thanks to them and their hard work. 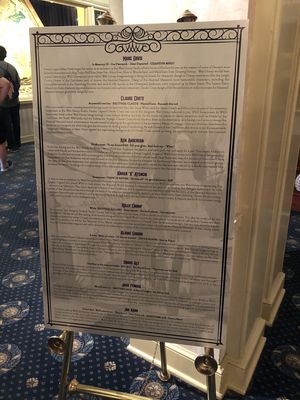 Though the collection is small, the gallery is an absolute must-see next time you find yourself visiting the park. You could easily spend quite a bit of time in the gallery, looking at all of the beautiful art and learning about their creation. It's important to keep honoring the work of the incredible people behind Disneyland's most beloved attractions, so it's great to see something like this get put together for the anniversary. Stop by next time you're in the neighborhood, you won't regret it.