Welcome back to another Disney Top 5. If you've been following my Top 5 for the last month or so (and I deeply appreciate that fact if you have) you know that I've been taking a more in depth look at particular attractions. You'll also know that I've been doing this for several weeks now covering five attractions so far and I still haven't left the Magic Kingdom. Why leave the Magic Kingdom? Five attractions doesn't even scratch the surface of what I always love to refer to as the heart of Walt Disney World. So, let's not park hop just yet. There's still plenty of magical ground to cover. Last time, in honor of the opening of Toy Story 4, I covered Buzz Lightyear's Space Ranger Spin. This time I'm staying n the neighborhood just across from Buzz as a matter of fact. It's one of my all time favorites, and a true Disney classic—the Tomorrowland Transit Authority PeopleMover.

The attraction that my family and I simply refer to as the PeopleMover, has run under several names since opening in Tomorrowland in 1975. At first it was known as the Wedway PeopleMover. That name lasted for nearly 20 years until Tomorrowland received a makeover and the name was changed to the Tomorrowland Transit Authority, which lasted for about 15 years. In 2009 the PeopleMover moniker was added back into the mix along with a new paint job, new LED lighting, and a new speaker system. Throughout all of its name changes, one thing has remained constant: the PeopleMover is a wonderful, relaxing way to get a new perspective on Tomorrowland. Clocking in at around 10 minutes, it's one of Disney's longer attractions and covers plenty of ground in this corner of the Magic Kingdom.

The PeopleMover has history, it moves through several Tomorrowland attractions, and it is an impressive piece of forward-thinking technology. My family has loved it since day one. As a matter of fact, we've ridden it more than once in the same day. Let's find out why with my Top 5 things to love about the PeopleMover.

While it may not be a state of the art animatronic like some of its Disney World cousins, the Robo Newz robot in the queue just below the speed ramp that delivers guests to the attraction is one of those hidden Disney gems that most people miss. 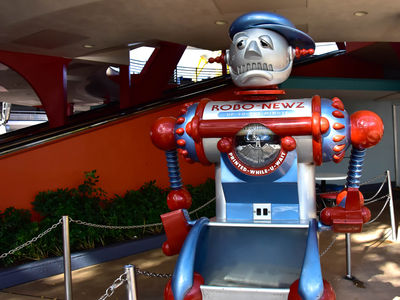 Make sure to seek out the Robo Newz the next time you visit Rocket Tower Plaza Station. Photo by Donald Fink.

The reason most guests miss out on the tongue-in-cheek news stories spouted out by the Robo Newz robot is the fact that unless the park is jam packed, the PeopleMover queue is more than likely a short wait and therefore most guests typically don't enter the attraction this way. That's a shame because Robo Newz is classic Disney kitsch and it's a detail worth checking out. Keep in mind that Robo has been known to be on the fritz, but he's always worth checking out in my opinion.

The PeopleMover itself uses some pretty cool technology and was way ahead of its time. The cars are propelled by linear induction. That means that the track is lined with magnets in key locations. The vehicles themselves also have magnets. Simply stated, the reaction of the magnets propel the vehicles forward. Those of us that have been rocketed out of the terminal over at Hollywood Studios' Rock N Roller Coaster have experienced a super-charged version of the same concept. 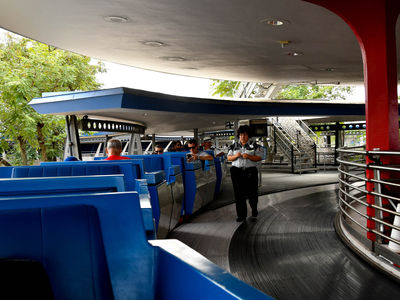 Take note of how the ride works on your next trip around Tomorrowland. Photo by Donald Fink.

The system, though installed in a theme park, was touted as a "transportation system of the future." The blue sky thinking at the time was that cities, towns, airports, and such would be installing PeopleMover-style transit systems to solve their transit problems. Unfortunately that turned out not to be the case and there are very few if any such systems in place in the United States. They exist on a larger scale in cities around the world, but the small car style like the one found in Tomorrowland that Walt envisioned as a main mode of transport through his experimental prototype community of tomorrow never caught on.

I'll never forget the first time my 4-year-old daughter rode the PeopleMover. I still have the video. When she heard the ride narration say something about entering Space Mountain, a look of terror came across her face. She thought we were going onto the ride itself and she was having no part of that. Once she realized that we were just passing through, she was quite relieved, but she was still a little uneasy until we exited Space Mountain and she realized that she was safe. One of the coolest parts of your journey around Tomorrowland is passing through the iconic Space Mountain. 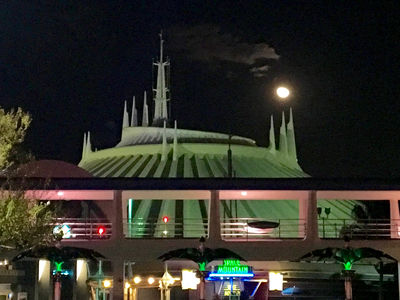 Space Mountain looms beyond the PeopleMover tracks at night in Tomorrowland. Photo by Alan S. Dalinka.

From that first moment when you encounter the upside down astronauts, through the coaster section when you hear the hoots and hollers of the guests blasting through space, you are transported to another place and that's what a great Disney attraction is all about. Much can be and has been said about experiencing the trip when the Space Mountain lights are on. Yes, it's cool and it's something every Disney fan should be lucky enough to catch once or twice. As for me, I prefer the lights off and Space Mountain functioning as it's supposed to. That's the true PeopleMover experience.

There are many wonderful spots to view the majestic Cinderella Castle, but in my opinion the view from the PeopleMover as you pass around the outskirts of Tomorrowland is the most impressive. It's a unique vantage point. There's nothing else like it in the park. 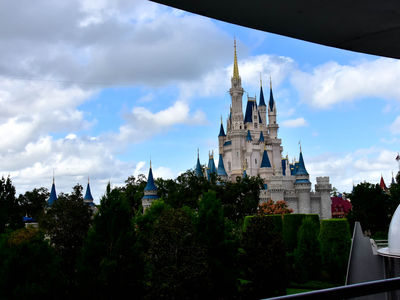 The PeopleMover affords great views of Tomorrowland, and at one point along the journey you'll get a great view of Cinderella's Castle. Photo by Bonnie Fink.

I've never been on the PeopleMover when it has stopped for any long period of time, but I'm always wishing for a breakdown as the castle comes into view so I can stop and enjoy the scenery for a bit longer, especially at night when the castle is lit up. In my opinion, it's one of the best views in all of Walt Disney World.

The reason that this occupies the number one spot on my list is simple, it's all about Walt Disney. Just after the aforementioned view of Cinderella Castle and before you pass through the Mickey's Star Traders shop, you are treated to a huge diorama of what was known as Progress City. Those of us in the know are aware that this was Walt's original vision for Epcot. 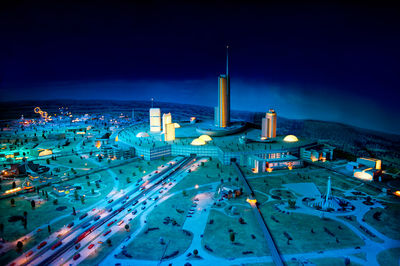 The model for Walt Disney's Progress City is a highlight of your trip around Tomorrowland on the PeopleMover. ©Disney.

Epcot wasn't supposed to be a theme park or a permanent World's Fair as it is today. Walt envisioned an actual city filled with pavilions and technology where people would live and solve the world's problems. Search for Walt Disney's Florida Project film on YouTube if you need more explanation. It was classic visionary Walt thinking, way ahead of his time, as usual. As much as I adore Epcot, I certainly would've loved to see what Walt would've done had he lived to see his dream come true. This model gives you as close a look as you're ever going to get. I could spend hours just looking at the model because it's got Walt written all over it.

The PeopleMover is one of those attractions that my whole family loves and never gets tired of. It's not thrilling in any way shape or form. It's not cutting edge. Aside from the linear induction component, it's about as simple an attraction as you can get. I suppose that's why we love it so much. It's a great respite from the heat and from the constant walking. It's a great way to see all that's going on in Tomorrowland. You get to see the inside of Buzz Lightyear and Space Mountain. It's got an amazing view of the castle. On top of all that you get to see a true Disney treasure, the model of Walt's dream city up close. What more could you ask for?

That's all for this Top 5. As always, I'd like to hear what you have to say. Click on the link below and let me hear your thoughts on the PeopleMover and I'll see you next time with another Disney Top 5.