On July 9, 2019, Walt Disney World officially opened the new 16 floor, 545-room Gran Destino Tower at Disney's Coronado Springs Resort, marking the completion of the resort's refurbishment and reimagination. I was invited to be on-hand for the two-day media preview of the reimagined resort and the tower's grand opening ceremony.

Gran Destino Tower now provides the new arrival and reception experience for all guests staying at Disney's Coronado Springs Resort, which originally opened on August 1, 1997. Since its opening, the resort has been Disney's largest convention resort, featuring one of the largest single-level convention centers on the East Coast. This "Moderate Resort" (in Disney's price-and-amenities classification), located in Disney's Animal Kingdom Resort area, now includes 2,385 guest rooms, including suites in lakeside casitas and the new Gran Destino Tower (which also includes 50 suites).

The guest rooms also provide numerous, conveniently located, electrical outlets and Disney's latest in-room amenity: interactive televisions. The new televisions in guest rooms allow guests to not only watch a Disney Resort's usual assortment of channels, it also includes a selection of on-demand movies and programs from the Disney family of studios, the ability to view PhotoPass Photos, and the use of Chromecast to stream content from mobile devices and laptops wirelessly to the TV. Gran Destino Tower guest rooms are the first Disney Resort to have the new interactive televisions.

Have a look at the new arrival experience, the lobby, a standard guest room, a suite, and the somewhat unique for Walt Disney World elevators. The video also shows the Barcelona Lounge on the lower lobby level, which offers coffee in the morning and cocktails the remainder of the day. Video by Alan S. Dalinka.

The guest rooms in Gran Testino Tower also feature Disney's new interactive televisions, which include complimentary on-demand Disney movies and access to PhotoPass photos on a linked MyDisneyExperience account and Chromecast for streaming content from mobile devices to the television too. Video by Alan S. Dalinka.

Gran Destino Tower's name is inspired by the surrealistic Disney animated short film Destino, which began as a collaboration between Walt Disney and Spanish artist Salvador Dali. Though completed and released in 2003, production on the film began back in the 1940s. The Dahlia Lounge on the 16th floor of the tower is named after the heroine of the film, a mortal woman who enchants the Greek god Chronos. Dandelion imagery and metal bell accents all around the tower all draw inspiration from the film and its heroine. From a storytelling standpoint, Disney Imagineer David Stofcik said that the tower pays homage, in a prequel sense, to the Spanish origins of the stories of Mexico and the American Southwest told at the resort. He said that the resort's lake ties it all together and that the tower's "rippling" lines on its exterior (which are illuminated at night) represent water that flows through the building and into the lake. As an architect, Stofcik, noted that not only were all 1,800 existing rooms of the rest of the resort renovated into their modern, more sophisticated style, taking into account lessons the team learned in developing the new tower, but that the tower rooms themselves are much bigger than Disney's other Moderate Resorts. He said some of the Spanish influences were extended to provide opportunities to allow more light into spaces in the building, and that the decorative panels around the lobby itself were inspired by five specific Spanish tile designs from around Barcelona and Toledo.

The Destino film, which has no dialogue, plays on several screens in the main lobby and in the Dahlia Lounge. During our preview it was not available on the in-room on-demand television.

Disney says that the three "lodging districts" adjacent to the Gran Destino Tower take their inspiration from "the elegant cities, neighborhood dwellings and diverse natural lanscapes of Mexico and the American Southwest. The elegant and sophisticated Casitas emphasize the residential areas of colonial cities found all over Mexico. The Ranchos represent ranch houses of the dry southwestern chaparral regions of northern Mexico and the American Southwest. The Cabanas evoke the look and feel of a small tropical coastal fishing village on the Mexican coast."

The main pool complex at the resort remains the Dig Site, which features a "massive gray stone Mayan temple that recalls many of the ceremonial centers created by the ancient Mayans." In the Disney-imagineered story that has long-existed at the resort: "[T]he temple sits five stories above the Coronado Springs, and the water cascades down the temple's steps into the Lost City of Cibola Feature Pool. Bas-relief sculptures, called stellae, have been carved on the pyramid." The water references of the new tower that Stofcik described, tie in to that storytelling.


The July 9, 2019, opening of Gran Destino Tower marks the completion of the refurbishment and reimagining of Disney's Coronado Springs Resort. Photo by Alan S. Dalinka.

As home to Walt Disney World's largest convention facilities, the resort itself is geared toward the needs of meeting attendees (though, as a Disney Resort, it is also family friendly). An air-conditioned corridor connects the new tower with the main convention space through the resort's former lobby. Sofcik told us that the new bridges across the lake were also intended to help shorten the walking distance for meeting attendees around the resort, and, of course, the Three Bridges Bar & Grill, which gets its name from that feature, was also designed with convention-goers in mind. He said that folks in the past said that the resort had been missing "connection points, small and large" where groups could meet after the sessions in the ballrooms. Three Bridges provides that sort of space, as do numerous nooks and crannies in the hotel public spaces—like lobbies, lounges, and other public areas. Indeed, as a frequent traveler myself over the years, it was nice to see that the public spaces of the Gran Destino Tower have been designed to cater to the electronics-charging needs of modern travelers, with electric outlets available at many seats throughout the lobbies and lounges.

The new tower also includes a new 2,859-square-foot ballroom, which divides into three smaller rooms, as well as a 24-seat boardroom. Nearby, the new Destino Plaza on the lower lobby level is available for weddings and other outdoor receptions.

Mickey Mouse was on hand to celebrate the completion of the reimagination of the resort. This video of the dedication ceremony includes more discussion of the cultural influences that inspired the renovations and new amenities of the resort. Video by Alan S. Dalinka.

Although considered part of the "Disney's Animal Kingdom Resort Area," the resort actually sits somewhat between the Epcot Resort Area and Disney's Animal Kingdom itself. And, as there are not any other structures taller than the trees between the new Gran Destino Tower and Magic Kingdom, the panoramic views from the upper levels of the resort and, indeed, the new Toledo-Tapas, Steaks and Seafood restaurant and Dahlia Lounge on the 16th floor, are very impressive. Indeed, Dahlia has an outdoor patio where the view extends from Epcot on the left, to much of the Disney Skyliner gondola system, the Tower of Terror and a great deal of Star Wars: Galaxy's Edge at Disney's Hollywood Studios, over to Blizzard Beach, and, finally, the floating mountains of Pandora, the Tree of Life and Expedition Everest over at Disney's Animal Kingdom on the right. Toledo's windows facing the lake, on the other side of the tower, overlook the resort and, in the distance, the Magic Kingdom, with Cinderella Castle poking above the treetops along with Bay Lake Tower, Disney's Contemporary Resort, and more.

The Dahlia Lounge, located on the 16th floor of the new Gran Destino Tower, has an outdoor patio that provides panoramic views from the resort to Disney's Animal Kingdom, Disney's Hollywood Studios (including Star Wars: Galaxy's Edge), the Disney Skyliner, and Epcot. Video by Alan S. Dalinka.

At night, the Gran Destino Tower provides views of fireworks around Walt Disney World (though, at least as of the preview, not accompanied by their respective soundtracks). Video by Alan S. Dalinka.

As for the menus of the new restaurants themselves, Toledo – Tapas, Steak & Seafood is a table service restaurant offering dishes and small plates inspired by the flavors of Spain. Not pronounced like the city in Ohio, Toledo is inspired by the Spanish city that was home to avant-garde writers and artists in the 1920s and ’30s. Three Bridges Bar & Grill at Villa del Lago is a casual, waterside dining area that is open-air with a menu of light bites, entrees, and lots of beverages, including the resort's house-made sangrias.

As part of the reimagination of Disney's Coronado Springs Resort, there is a new open air food and beverage venue named for its location: Three Bridges Bar & Grill at Villa del Lago. Its menu features small bites, entrees and a full beverage menu including the resort's sangrias. If you would like the sangria recipes, let us know or, when you are at the resort, just ask your server or bartender. Video by Alan S. Dalinka from the hosted media preview on July 8, 2019. 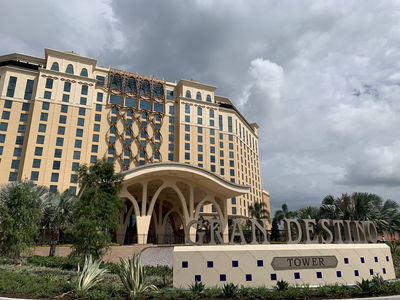 Gran Destino Tower is the arrival point for all guests at Disney's Coronado Springs now. 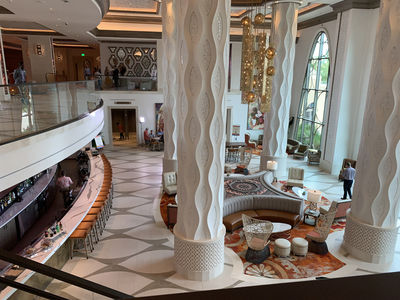 The two-story lobby is very light and inspired by Spanish architecture. 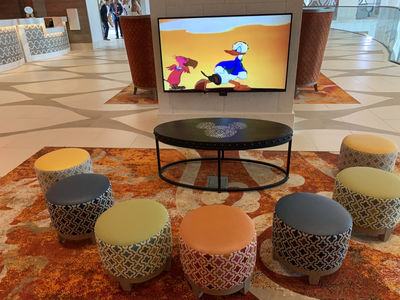 Even the kids have small meeting areas. 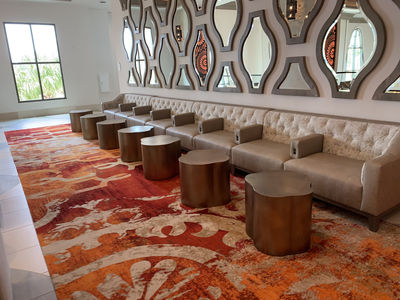 There is ample seating throughout the lobby with plenty of places to plug in electronics. 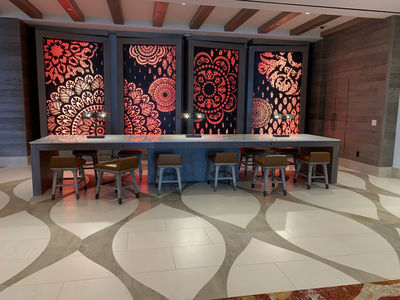 The panels behind reception are inspired by Spanish tiles. 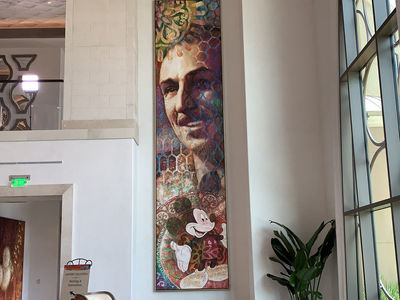 Walt Disney and Mickey look down on the lobby. 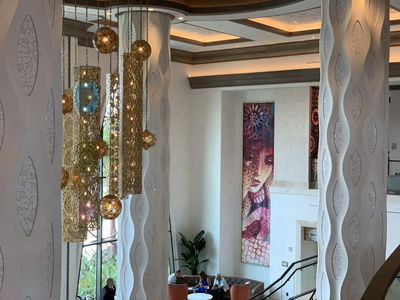 As does Dahlia, the heroine of "Destino." 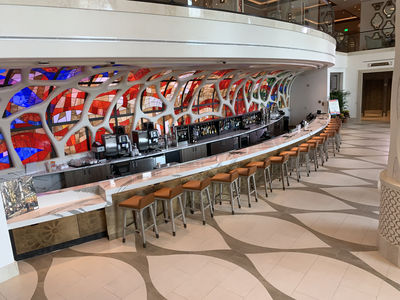 Barcelona Lounge is located on the lower level of the lobby. 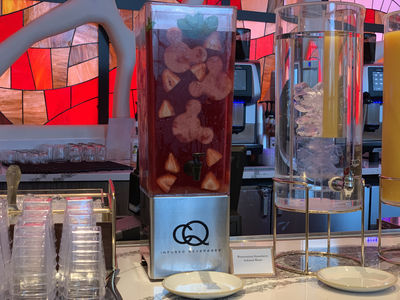 Barcelona Lounge on the lower level of the lobby features different beverages by time of day. 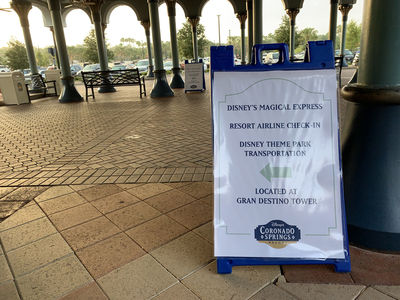 All arrivals, including Magical Express have moved to Gran Destino Tower. 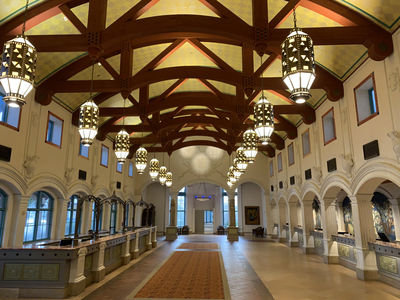 The former resort lobby is now the connection point to Gran Destino Tower. 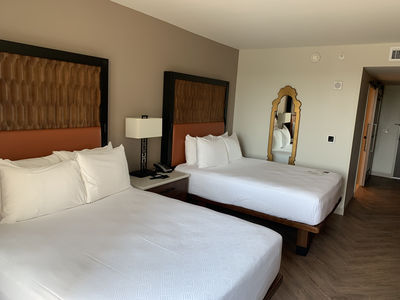 Disney says the guest rooms are larger in Gran Destino Tower than other Moderate Resorts. 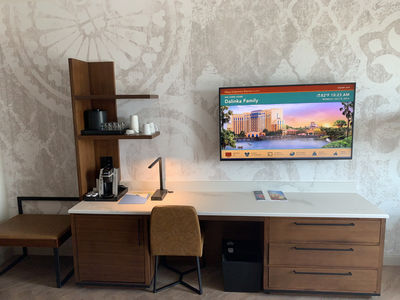 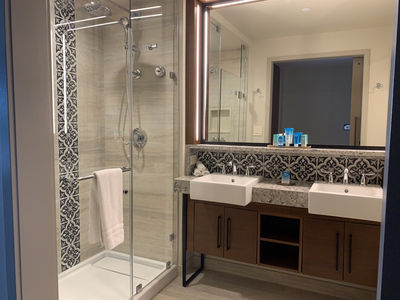 My guest room did not have a tub. 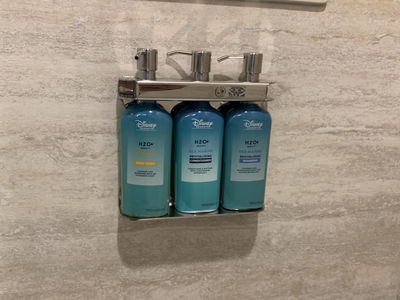 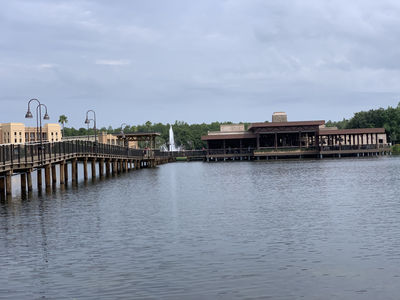 Three Bridges Bar & Grill is located on an island in the lake. 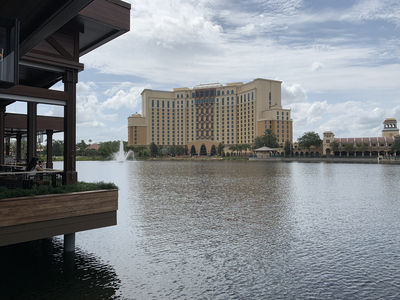 Three Bridges Bar & Grill provides views all around the resort. 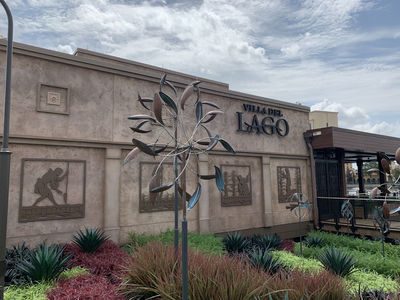 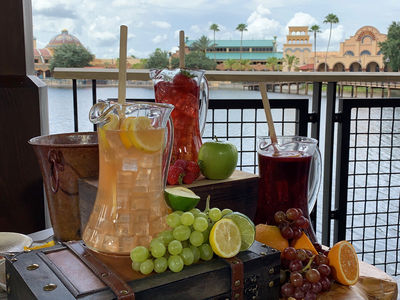 Toledo & Dahlia on the 16th Floor 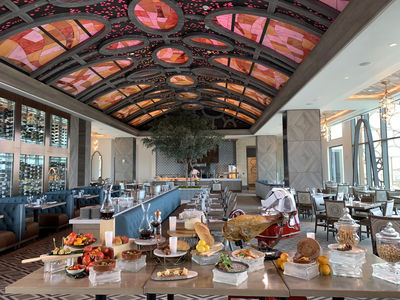 Toledo restaurant is located on the 16th Floor. 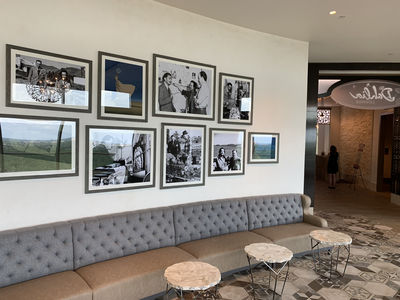 Dahlia is as well, and includes many photos of Walt Disney and Salvador Dali. 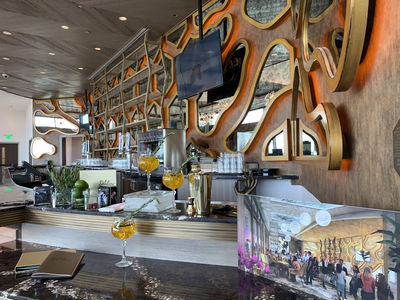 The decor of Dahlia is inspired by Spanish surrealism. 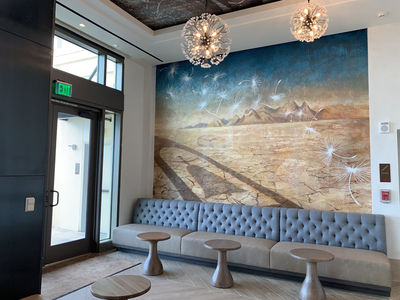 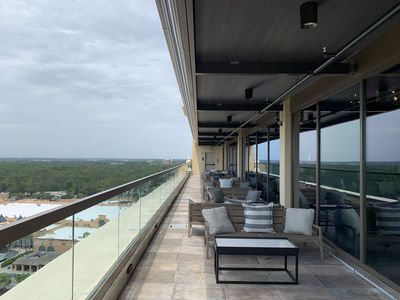 Dahlia has an outdoor patio that faces toward Disney's Hollywood Studios. 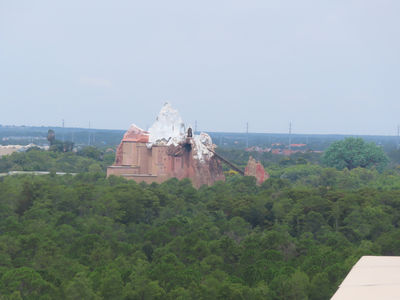 From Dahlia's patio, you can see Disney's Animal Kingdom. 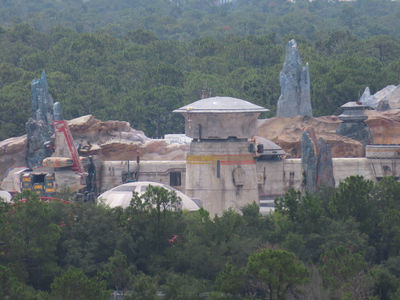 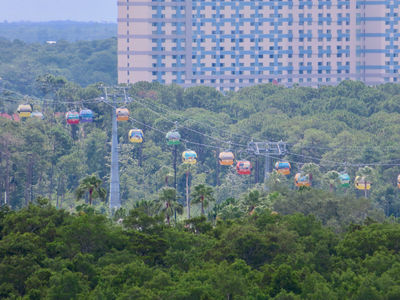 The 16th floor also provides an overheadview of the new Disney Skyliner gondolas. 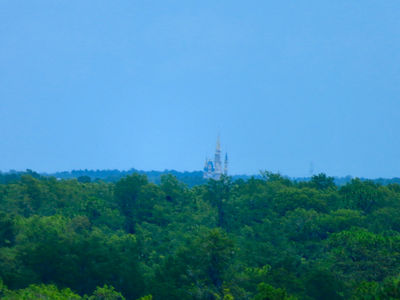 In the opposite direction, upper levels of Gran Destino Tower have a view that includes Cinderella Castle peeking above the trees. Photo by Alan S. Dalinka. 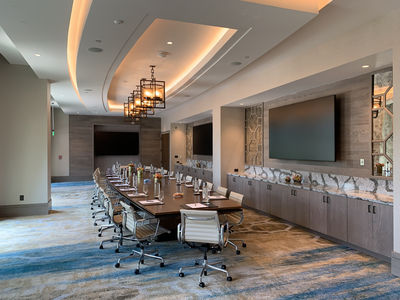 The Boardroom is one of the new meeting areas in Gran Destino Tower. Photo by Alan S. Dalinka. 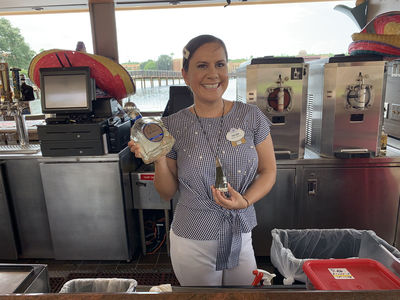