The Disneyland Resort is constantly adding and updating things throughout the parks to keep things fresh and unique. As we all know well enough by now, one of the latest additions to the Disneyland Resort is Star Wars: Galaxy's Edge. Not only did we gain a fresh new land with the addition of Galaxy's Edge, but we also gained new dining options, attractions, character experiences, shops, interactive experiences, and, my personal new favorite addition, a perfect new hangout in Oga's Cantina. 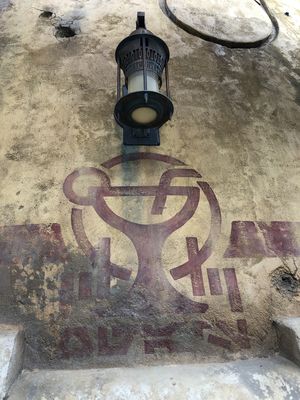 While Disneyland Park has long been known to not serve any alcohol (except in Club 33), that streak is now broken with the opening of Oga's Cantina. This new location is exactly as its name suggests, a cantina, featuring a bar serving a variety of specially themed cocktails, beers, and wines, in addition to a selection of non-alcoholic drinks. Tucked away in Galaxy's Edge, Oga's Cantina would be barely recognizable from the outside, were it not for the line of people waiting to get in, and the booming music echoing from inside. The best chance you have of getting into Oga's Cantina right now is to make a reservation in advance, and luckily, the Resort just opened these reservations to be made up to 14 days in advance of your requested date (additionally, a small number of reservations will be held for day-of reservations, as well). I highly recommend you make a reservation as early as you can—the cantina is very popular and will fill up quickly! 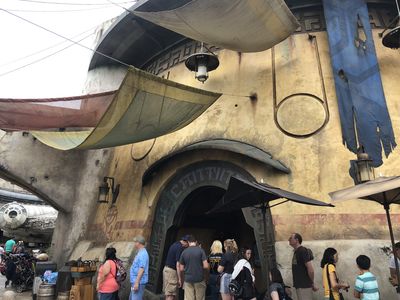 Once you arrive at Oga's Cantina for your reservation time, you'll still have to wait in a bit of a line outside as they work through getting people out, and new people in. It doesn't usually take long once you're in line outside though, they seem to have the system down pretty well. Once it's your turn to go inside, a cast member will lead you to your spot. The vast majority of spots in the Cantina are standing only, so don't expect to sit down while visiting and you won't be disappointed! While you may luck out and get a seat, don't fret if you're standing, it's still a lot of fun and actually adds to the entire experience!

When you've settled inside, one of the bartenders will be around to take your order before long. One note here, as with the other cast members throughout Galaxy's Edge, the cast members in the Cantina will speak with their own "language," if you will. Note that they will most likely ask you for your credits when requesting payment, or your identification credentials for your ID. There are so many different drinks on the menu at the Cantina, of all different varieties, you're certain to find something to your liking; also, there is a two-drink maximum per guest. 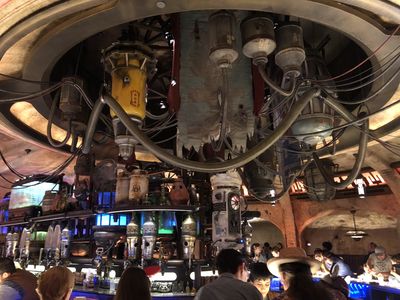 The menu offers a variety of drinks, including some with tequila, rum, vodka, and even bourbon! There are drinks that fizz, bubble, are surrounded in clouds, or are served in specialty mugs. If you come early in the morning, you can even get "morning cocktails": one with coffee, or one that is similar to a Bloody Mary. If cocktails aren't your thing, don't worry—there is a really cool selection of beers and wines, as well, and don't worry, they are also themed for Galaxy's Edge. Each beer is brewed by a different brewery for Galaxy's Edge and features a fun Star Wars-themed name. The wines are also themed, one even comes in a bright color. Also, if you're feeling snacky…fear not! Oga's Cantina also offers a couple of snack options, including the sweeter Oga's Obsession, or the more savory Batuu Bits, which is more of your typical "bar snack" option. 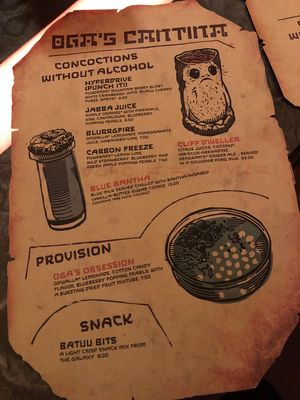 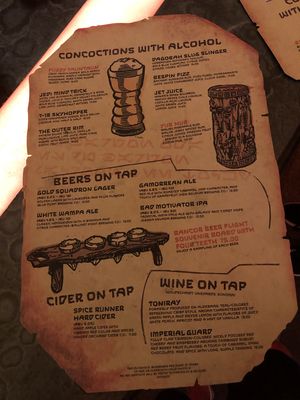 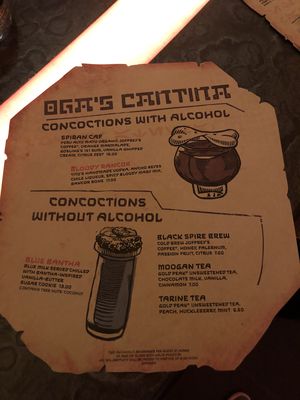 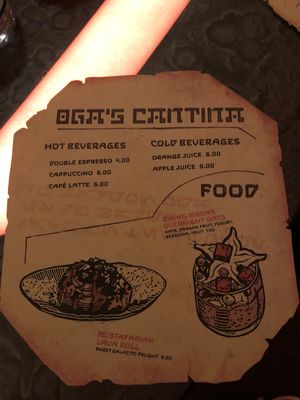 Aside from the delicious drinks, the best part of Oga's Cantina is hands-down the atmosphere. The environment in the Cantina is absolutely amazing and definitely feels as if you were in the Star Wars universe visiting a cantina. Make sure to take a good look around when you're visiting and take in all of the incredible tiny details that the Imagineers put into the Cantina, you'll be amazed. The cast members working in the Cantina also help make it amazing and definitely lean into their roles. Finally, make sure you check in on everyone's favorite DJ: Rex! That's right, the original pilot from Star Tours has found new employment with Oga's Cantina and seems to be enjoying his new job just fine. Oga's Cantina is a fun addition to the Disneyland Resort, and it's certainly become one of my favorite places to visit and hang out while visiting the Disneyland Park. The atmosphere of the entire bar is incredibly fun for fans of all ages, and the drinks are pretty tasty, as well. If you haven't visited yet, put it at the top of your to-do list, but be sure to make a reservation—you won't regret it!