For the past few months, I've been counting down my favorite things about my favorite Disney World attractions. After hitting just about every corner of the park, I'm still happily ticking off attractions in the very heart of Walt Disney World, the Magic Kingdom. Last time we talked about The Many Adventures of Winnie the Pooh. This time, we'll push the thrill meter up a few notches as we head west to Frontierland for a true Disney classic, Big Thunder Mountain Railroad.

In about 45 days, I'll be back in Frontierland getting ready to whip through the town of Tumbleweed on a runaway train with my 17-year-old twin boys in tow. We're spending a long weekend at Walt Disney World and can't wait to be back. Big Thunder was the first Disney coaster and really the first big roller coaster that all three of our kids went on, and it's still a huge favorite for all of them. And why shouldn't it be? Is it the biggest, craziest coaster in Walt Disney World. Clearly not, but it's just about impossible to not smile and have an awesome time on Big Thunder. I'm a big coaster fan and Big Thunder Mountain has always held a high spot on my coaster list. I'm clearly not alone. It's a big draw in the Magic kingdom and has been ever since it opened in 1980.

The Magic Kingdom version of Big Thunder Mountain was the second to open after the original in Disneyland made its bow in 1979. There are also versions in Tokyo and Paris. Designed by legendary Disney Imagineer Tony Baxter, the ride had its roots in a much bigger attraction, the never built Western River Expedition, an entire area of the Magic Kingdom with multiple rides being designed by Imagineer Marc Davis. After the Magic Kingdom opened in 1971, the public practically demanded that Disney build an east coast version of Pirates of the Caribbean, an attraction the company did not expect to replicate from Disneyland. Pirates put the brakes on the Western River Expedition as did the costly construction of Space Mountain. Big Thunder Mountain was extricated from the Western River Expedition and stands as the sole remnant of a much bigger plan.

If you view the concept art, one could only imagine just how awesome the Western River Expedition would have been. The fantastic theming of Big Thunder Mountain Railroad, its queue, and the surrounding areas are all hints of what was almost built in this corner of the park. We're so lucky that Big Thunder was pulled out of the massive attraction and built in the wilds of Frontierland. It's an extraordinary example of Disney attraction design. What's so great about it? Let's take a look with my Top 5 things to love about the Magic Kingdom's Big Thunder Mountain Railroad.

Over the last 10 years or so, Disney has gone to great lengths to provide entertainment to its guests as they wait in long attraction lines. The Many Adventures of Winnie the Pooh, Peter Pan's Flight, and the Haunted Mansion are examples of pretty simple attraction queues that were "plussed" and received really top notch treatment. These additions have followed the Disney tradition of expanding the attraction's storyline while simultaneously giving the guests something to do as they pass the time. Big Thunder received a ton of details in 2013 expanding upon the backstory that this is in fact supposed to be a mine. 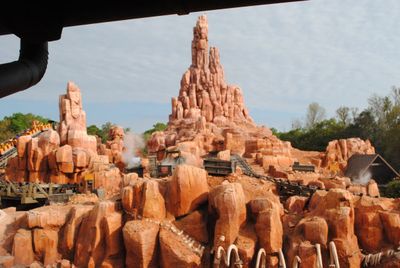 Here you see explosions going off on the mountain initiated by guests in the queue. Photo by J. Jeff Kober.

You can set off explosions, watch home movies depicting the day to day routines of the mine workers, as well as look into and "smell" the mine itself. There are some wonderful tips of the hat to legendary Disney Imagineers like Tony Baxter, Marc Davis, and Blaine Gibson. I love the animation wheels, the canaries in the coalmine, the references to the Apple Dumpling Gang and of course the dynamite plungers. Who doesn't want to push down on an old fashioned dynamite plunger like you've seen in cartoons and in the movies and actually see a little explosion go off out on the coaster track?

Getting my kids on roller coasters took a long time. They didn't even want to ride Goofy's Barnstormer back in the day. I'm not sure what cracked them, but I suppose after their mother and I consistently extolled the simple, but terribly fun, virtues of this ride, they decided that Big Thunder would be their first Disney coaster, and really their first major roller coaster overall. That was a decision they certainly didn't regret as it pretty much instantly became a favorite Walt Disney World attraction for all three of them. There's good reason for that. Big Thunder Mountain really is the perfect first roller coaster ride. 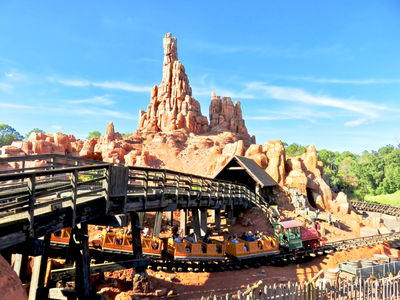 Big Thunder Mountain is the perfect jumping-off point into the world of roller coasters. Photo by Alan S. Dalinka.

There are no big drops. It doesn't go upside down. It's rough but not too rough. It's not too fast and simply stated, it's just so much fun. Case in point, several years ago, our good friend and Disney buddy Laura took her youngest daughter, Leanna, on the ride with us for her first time. When the ride came to a screeching finish, Leanna, who typically doesn't say all that much on our trips, turned to us with one of the biggest smiles I've ever had the pleasure of seeing and jsaid to us, "Wasn't that so much fun?" We, of course, knew just how much fun it was, but her blissful reaction still stands as the top ride reaction I've ever seen from anyone at Walt Disney World. You literally saw the ride win her over in that moment. The look on her face said it all.

The Disney difference is all in the details, and Big Thunder Mountain offers up an endless amount of visual candy to look at—as long as you're not screaming too much or tearing around turns with your eyes closed. Seriously, keep your eyes open as you walk through the aforementioned queue, throughout the ride, and even after you exit and you'll see an extraordinary amount of theming and detail everywhere you look. 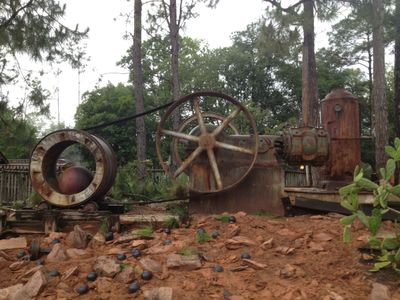 Some of the authentic Big Thunder Mountain Machinery. Photo by J. Jeff Kober.

Look for the animals, for the mining equipment, the dinosaur bones, the old houses and most of all the exquisite rock work that surrounds you at every turn. Big Thunder Mountain is a masterpiece of Disney design. It's beautiful to look at and given the speed at which you careen around the mountain, you're guaranteed to miss things. That just makes them more fun to discover on your next trip.

Despite all the fun you will inevitably have as you travel around the mountain in your runaway mine train, my favorite part of the whole journey has to be the first lift hill after you leave the loading area. Once you wave goodbye to the cast members at the loading platform, you turn into darkness and begin your ascent up the mountain. 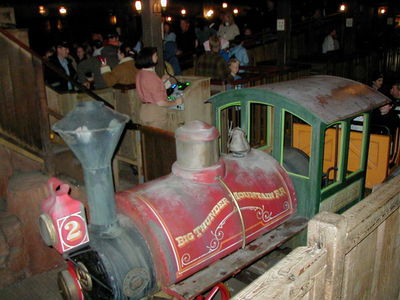 Shortly after you board the train, you begin your ascent up through the caverns. Photo By Brian Bennett.

You do so through a bat-filled cave of wonders. Talk about Disney rock work. The caves off to the side of the lift hill are just unbelievable to behold. You can't believe that it's all man-made. Couple that with the bat noises, the blinking eyes, and the upcoming waterfall and you've got one of Disney's best attraction scenes of all time. It creates an air of mystery and tension as you ascend up through the darkness. It's probably one of my favorite coaster moments anywhere and the ride hasn't even really begun.

I've been writing here on MousePlanet for just over 10 years. I wrote for another Disney fan site for almost two years before that. So, imagine my surprise when last summer during my big 50th birthday trip, my daughter and her friends came up to me, after spending a night in the Magic Kingdom without me, and were ecstatic about a Big Thunder tip that none of us had ever heard before. They decided to forego the fireworks and just coincidentally happened to head over to Big Thunder Mountain hoping to take advantage of shorter lines. We've skipped the fireworks before and you typically do get shorter lines with just about everyone huddled together out in front of the castle. But, I guess we never rode Big Thunder at that moment before. They were absolutely raving about riding Big Thunder Mountain while the fireworks were going off. "Greatest thing I've ever seen,' was a quote one of them threw out at me. 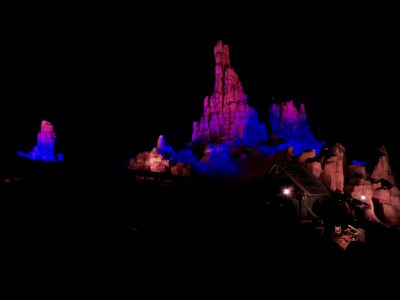 Head back to Big Thunder Mountain Railroad during the Magic Kingdom fireworks for an equally spectacular show. Photo by Alan S. Dalinka.

So, the next night, I had to find out what they meant. Right before Happily Ever After was set to begin, we made a beeline for Frontierland and were happily greeted by a ten minute Big Thunder wait time, which ended up to be more like seven minutes. I'll never forget coming out of that first cave after the first lift hill and literally being bombarded by fireworks.

You pop out of several caves on the ride and each time it was emerging from darkness and "BOOM" fireworks going off and showering you with colored light. It was absolutely incredible and I can't believe that after all these years and Disney experience I had never done this before, nor had I really heard of this as something that shouldn't be missed. Big Thunder puts you up quite a bit higher and further back from the castle and it's a different vantage point then anywhere else in the park to see the fireworks. The timing was just right and it made the ride even better. Big Thunder Mountain is a whole other experience at night and it's a whole other other experience when the fireworks are going off. Give it a shot on your next trip. It's fantastic.

Big Thunder Mountain Railroad is one of those attractions that I just can't get enough of. I've ridden it several times in a row when I was lucky enough to catch the park empty and the fun never gets old. It's an awesome coaster. It's packed with details and theming. The queue is entertaining and well done. It's a very different experience at night that makes it even more repeatable on any given day at the Magic Kingdom. Throw in the newly discovered fireworks element and you've got just a perfect Disney attraction. It's a ton of fun and never ceases to make me feel alive and young again, and that's what it's all about at Disney isn't it?

That's all for this time. As always, I'd like to hear what you have to say. Click on the link below to share your thoughts on my list and your own feelings about Big Thunder Mountain Railroad.